I'm occasionally asked if I prefer globe shaped tubes over their shoulder type counterpart. Indeed I like the globes better, not only for their aesthetically more pleasing shape but in some cases also because of their sound. Please take this sound judgement with the usual precautions since they are valid only for my listening taste and in my amps. 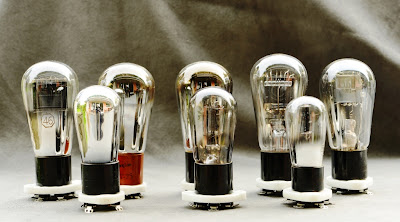 The next photo shows their counterparts in the more modern ST (shoulde type) glass: 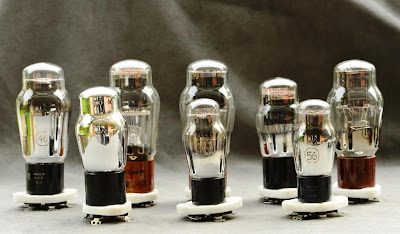 I have not compared all of these tube types directly in amps or preamps. My experience is mostly with 45/UX245, 10/UX210.

Let's have a closer look at the differences between the glass versions, starting with the 45: 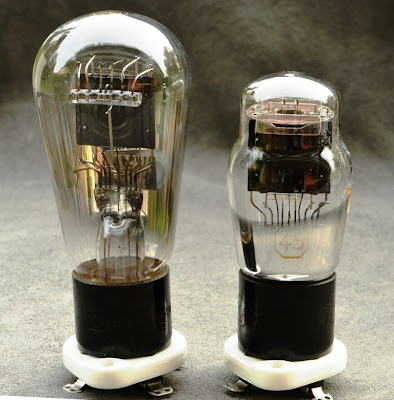 There is a big difference in the size of them, which is not always the case between globe and ST tubes. The ST tube uses the narrowed top of the glass for some extra mechanical support of the electrode structures. This is accomplished by the insertion of a mica disc which clamps into the top and holds the tube structure. The structure of the globe tube however is basically 'floating' in the glass. It has been speculated that the absence of the mica in the globe tubes might contribute to their sound. Any additional stuff in the enclosure can release gasses during the life time of the tube.The next phot shows a close up comparison: 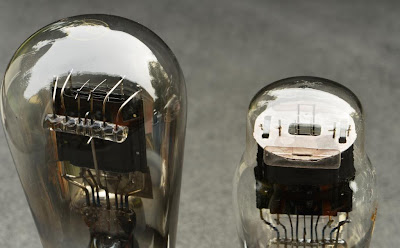 Nothing but metal and glass in the globe tube. A big mica disc in the ST. I am also a proponent of the hypothesis that this is the main reason for the sound difference.

This is even more apparent with the 10: 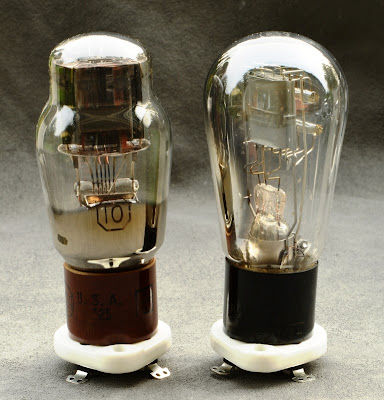 Here the ST version even has 2 mica discs at both sides of the electrode structure: 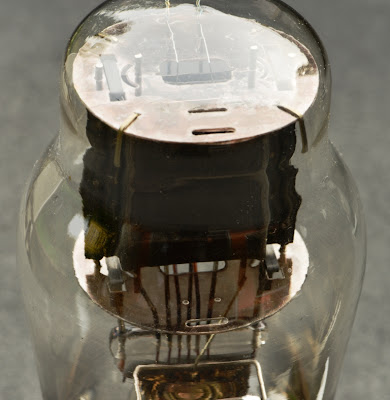 A lot of stuff in there to hold the electrodes. Again only metal and glass in the globe tube: 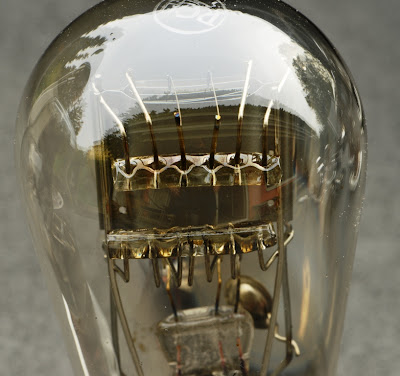 Of course this lack of support does make the globes more prone to microphonics. Not much of an issue in an output tube usually. But if used as driver or preamp tube this can be a problem. I have used UX210s in linestages without major microphonics but it required some selection of suitable specimens.
Similar difference between these two versions of VT25, both from Taylor: 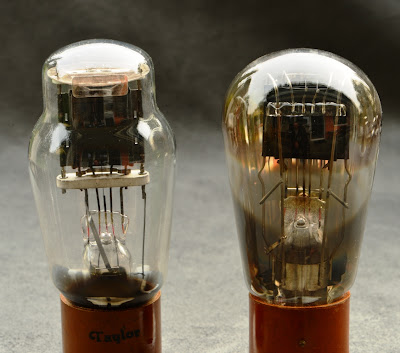 In this case just a single mica disc in the ST glass and an additional ceramic support at the bottom.
Not all globe tube types only use glass and metal as support structures. Some of them had some mica supports too. Like the 46: 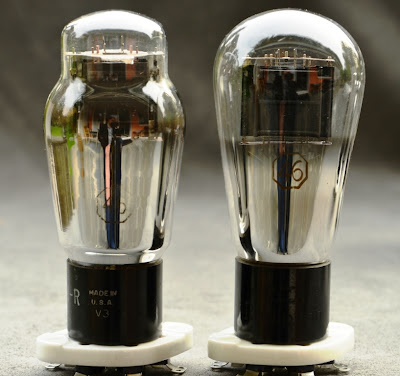 The close up shows the small mica triangle which is used to align the electrodes in the globe version. The ST version has much more mica inside: 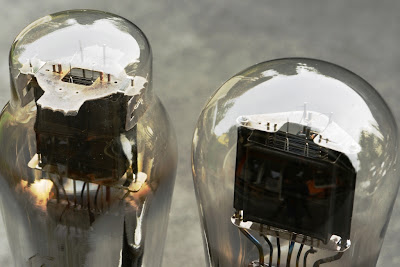 Also indirectly heated tubes have been made in both shapes, here the 56: 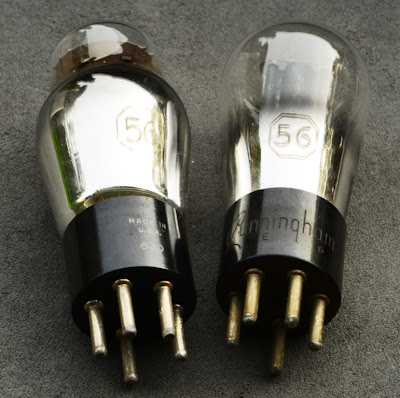 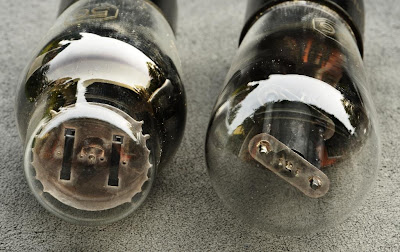 Here the globe version also uses some mica. In this case the bulbs have about the same size. The 27 is also available in both shapes. But globe 27s (called UX227) are usually bigger in size. 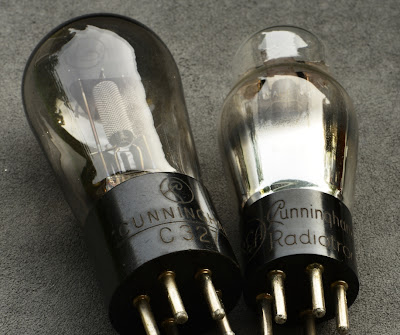 This globe 27 also distinguishes itself by the use of mesh plates, another topic for heated speculations about it's impact on the sound: 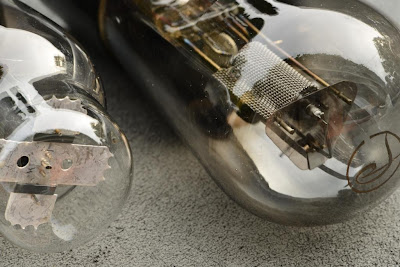 Lastly a comparison between globe and ST versions of the 841 (VT51): 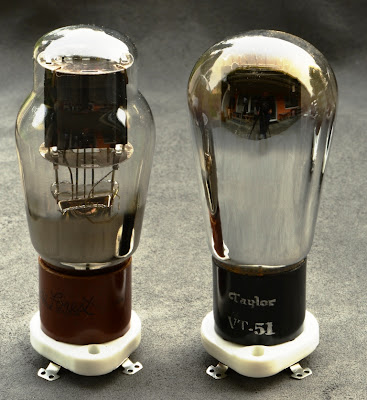 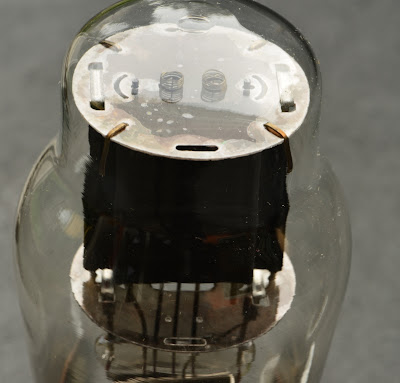 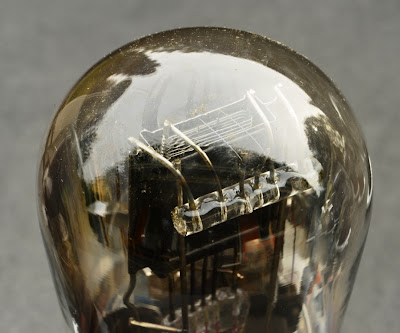 In many cases the question wether to use ST tubes or hunt for the globe version is simply answered by the fact that globes are becoming increasingly rare. Due to their fragile structure they are much more sensitive and are easily damaged during shipping. I have seen many globes with misaligned electrode structures due to the lack of mechanical support at the top. Even cases with the grid shorting to other electrodes. To find a well matched pair a selection from quite a number of samples is necessary.
Of course there are probably other reasons for the different sound. Could be different materials used during the early days of tube manufacturing. Increased microphonics can also make for a more euphonic and pleasing sound.
If you have the chance to try globe tubes, listen for yourself.
Best regards
Thomas
Posted by VinylSavor at 22:21