After I published the recent posts about the integrated and no compromise single ended 6CB5A amplifiers, I got many questions about the difference in sound between them and how the 6CB5A holds up against a 300B. 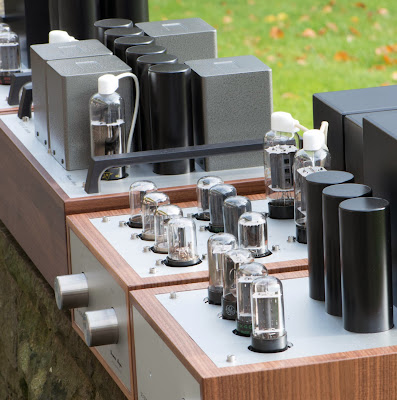 If you are a regular reader of my blog and followed the article series 'How does it sound' parts 1, 2 and 3 (also translated to german: 1, 2, 3) you already know that I am a bit reluctant to give sound impressions since they are always subjective and only valid within the context the evaluation has been done. Anyways I understand the wish to get at least some impressions about the sound of an amp people read about in the internet.

So I did a comparison between the two recently shown 6CB5A amplifiers which represent two ends of the scale in terms of parts quality and circuit topology for this concept. At least the way I have built these so far. There are always ways to improve certain aspects. Also the integrated amp could even be made a bit cheaper. But as built these two amplifiers represent what I think is feasible and makes sense. Even my entry level amplifiers shall have the basic sound qualities which I want and which are described in the articles linked above. 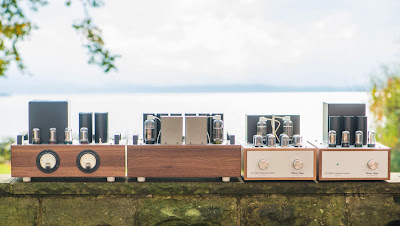 The integrated amplifier is in no way cheap sounding. It has a wide frequency spectrum and especially surprisingly solid bass. All the tone colours and details in the sound reproduction which are important to me are there. The power amp section has the same sound characteristics as the 6CB5A mono amplifiers which I showed earlier this year. Also the preamp section does not disappoint although it shares the power supply with the amp. The sound character of the Octal Phono and Line preamplifiers are retained.

The integrated amplifier is very quiet also through the phono input. The external power supply avoids any hum injection into the phono section. And it has another great advantage: No more worries about  all those interconnects and their potential negative impact on the sound. Take this with a grain of salt since I am not that much into cable sound. But for people who suffer from 'nervosa audiophilia', this would be one aspect less to worry about. Only interconnects to the turntable and CD Player are needed and speaker cables.

In order to do a valid comparison between the two amplifiers, I listend to the no compromise version using the line outputs of the integrated amp. I would normally recommend to use this amplifier with a preamp which is further up in the hierarchy of my scale, like the Octal Preamp MK2. Still this comparison quickly revealed the differences between the amplifiers. Although the more elaborate amplifier does not measure as wideband as the integrated amp (this is due to the transformer coupling) it has audible better resolution especially in the frequency extremes. Small shadings in tone colours in the bass are better reproduced and the highs are clearer, voice articulation is more natural. General tone colours are stronger and small differences in sounds like vibrations in frequency and amplitude are better resolved. All these differences become more pronounced when the no compromise amp gets hooked up to a better preamplifier like the mentioned Octal preamp Mk2 or a LCR phono stage.

So it is a matter of available budget and size constraints which amplifier to choose. I like them both for what they do and how they sound given the effort spent. I had been using the integrated amplifier as my main amp for a few weeks now and I could happily live with it. As I already mentioned in the past: An easy way to get good sound is to be happy with what you have or what you can afford. And stopping to worry if it could be better and what should be changed to get better sound. At the end it's about music and in reproducing music, both do an excellent job. 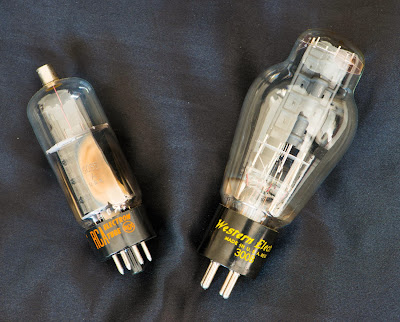 And how about the sound compared to a 300B? This is a question I get often lately, how does the 6CB5A compare to a 300B? My standard answer is that this question does not make sense in isolation. It is never the output tube alone which determines the overall sound. Much more important is how it is used and with which components and circuitry. 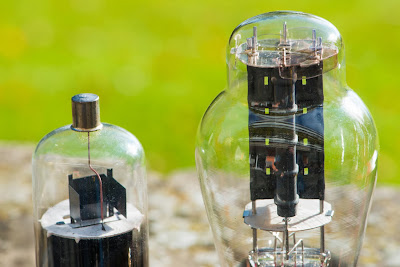 When I am asked I typically ask back: Compared to which 300B? I have heard larger differences between different 300B tubes than between a certain 300B and a 6CB5A. For me the 6CB5A is the alternative to the 300B if budget is restricted and original Western Electric 300B are not available. Even compared to new production 300Bs the 6CB5A are so much cheaper that this leaves more budget to use good quality components like the transformers used here. 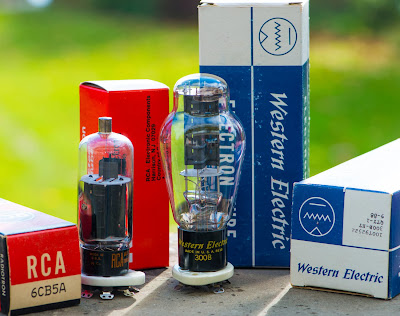 So it is all a matter of taste, preferences and budget. If you think you have to have a 300B, by all means use it. It is a great tube. But it got so much hype during the last decade which is not really justified. Don't think by just using a 300B you will get the best possible amplifier. Done right and using the best 300B tubes, a SE 300B sounds marvellous. I have built with the 300B in the past and will build with it in the future. If you are more concerned with the overall concept and best possible sound within a given budget, there might be alternatives.

Thomas
Posted by VinylSavor at 08:13