The circuit and assembly of the UX 201A Sound Processor  have been covered in previous posts, this and the next article in this series will be about the power supply. 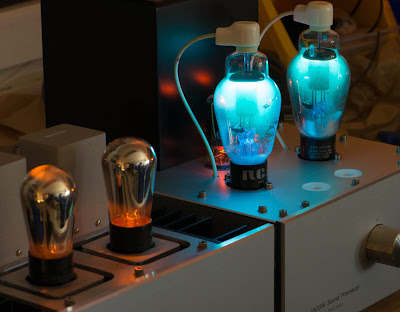 The power supply only has to deliver a single voltage of about 150VDC. But at a hefty current of 0.5A. So we need a power supply with some grunt. If rectification should be done with tubes, the average rectifier will not do. We need something tough which can handle this amount of current. Even among TV dampers, the choice is limited for such a high current. But there are some which can handle this job. For example the 6CG3.

I have chosen a full wave bridge rectification scheme for the task. This is the circuit: 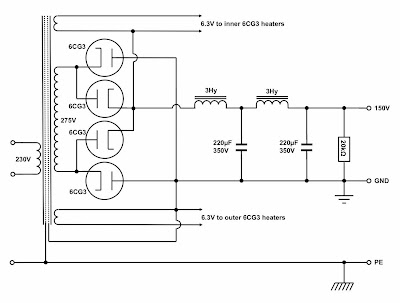 Quite straight forward, no surprises here. Since the voltages in this power supply are rather low and the 6CG3 allows quite large voltage difference between heater an cathode all heaters could be wired in parallel and fed from a single winding, referenced to ground. But the 6CG3 draws a lot of heater current. 4 of them need almost 8A. Since the power transformer which I used has two separate 6.3V heater windings, I split the 6CG3s into two pairs which are heated from one winding. The two tubes in the middle deliver the raw B+ voltagesat their cathodes. These share one of the heater windings, which is connected to raw B+ at one end. The two other 6CG3s are fed from the other heater winding which is referenced to ground.

The rectifier is followed by a choke input filter, using two LC sections. The chokes are Lundahl LL1638 gapped for 3Hy/500mA. The caps are 220uF/350V electrolytics. A 350V rating is used so that the capacitors will not get stressed with over voltage in case the power supply is turned on without the signal section attached. In that case the output voltage will rise significantly since the current draw would drop below the critical value to ensure proper choke input operation of the filter. The 20k bleeder resistor ensures that the high voltage gets drained after turn off if no load is attached.

No worries about the use of electrolytics. Each channel is decoupled by a choke in the signal section.

So far so good, but such beautiful tubes as the UX201A deserve some similarly awesome rectifier tubes. Here is an alternative PSU circuit using the 866A mercury vapour rectifier: 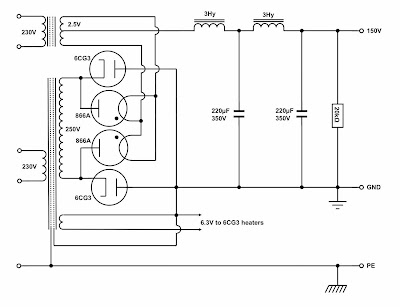 Two of the 6CG3s are replaced by 866As. Since they require a different heater voltage a separate filament transformer is added which provides 2.5V. Each 866A needs 5A filament current. So it might be easier to use two separate heater windings which can provide 5A each. If a 10A filament transformer is available they can be heated in parallel as shown in the schematic. The raw B+ is derived from the center tap of the 866A filament winding. If two separate filament windings are used, their center taps need to be connected. The filter section remains the same. Due to the lower voltage drop of the 866As, the secondary voltage needs to be a bit lower.

Two 6CG3s remain in the circuit in the ground path to complete the full wave bridge. They also provide a delayed high voltage to allow pre heating of the 866As without a separate switch. This has a cool effect when turning the supply on. At turn on there is no blue glow. As the 6CG3 heat up, a faint blue glow starts to appear between filament and plate of the 866As which slowly gets brighter as the TV dampers fully warm up. 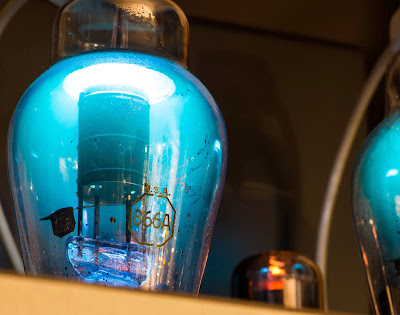 The assembly of the PSU will be shown next, stay tuned.

Email ThisBlogThis!Share to TwitterShare to FacebookShare to Pinterest
Labels: 01A, 6CG3, 866A, power supplies, UX201A