This months tube is another favorite rectifier. When you read my blog, you probably realized already that I'm not a big fan of the 'classic' tube rectifiers like 5U4, 5R4, etc. My favorites are TV Dampers of which I already presented the 6AX4. In terms of electrical paramters these have all I need. If some more power is required, there are also plenty TV dampers available, like the 6CG3. But sometimes you want something which is more spectacular in terms of aesthetics. If it comes to looks, mercury vapour rectifiers are the way to go. Nothing beats that mystical blue glow of a 866A: 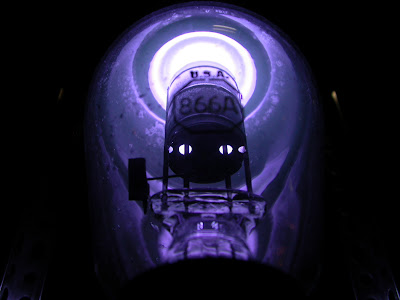 This is a photo taken from a 866A in operation. As the name implies, the tube contains mercury, which get's vaporized during warm up of the tube. When current flows, ionized mercury creates this eerie blue light which is quite intensive. But nothing comes for free, there is a big disadvantage of these tubes: mercury is very toxic and these rectifiers contain lots of it. This article should not be understood as an encouragement to use such tubes. Do so at your own risk. These need to be handled very carefully and all necessary precautions need to be applied to avoid breaking of the glass.
866As have been manufactured by many suppliers. Many are still available in NOS quality. Probably the most from the famous company RCA. 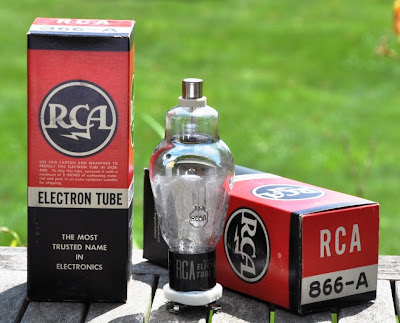 The 866A has more disadvantages over conventional rectifiers. They are single diodes. This means for the classic full wave rectifier scheme 2 of them are needed. A bridge requires even 4. The 866A has some hefty filament requirements: 2.5V, 5A for each tube. But therefore it can supply a lot of current. 250mA average per tube which translates to 500mA DC from a pair of them in a full wave rectifier. At lower voltages (peak inverse voltage below 2500V) this value can even be doubled. 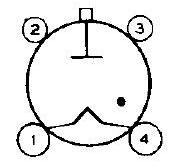 It has the UX4 base like most of the directly heated triodes. Only 2 of the 4 pins are used. The filament is brought out to pins 1 and 4, the two other pins are not used. The plate connection is brought out to a medium size cap at the top. Besides the care which is necessary to avoid the risk of breakage, the operation is also a bit tricky. The filaments must be warmed up for 30-60 seconds before the plate voltage is applied. This is necessary to ensure that the mercury is vaporized. Otherwise small drops of mercury could create an internal short and arc overs which would damage the tube. When a mercury vapour tube is used the first time, or after it has been transported, it needs an initial warm up time of 30 minutes without plate voltage. After that, and if the tube remains in it's socket in vertical position with the base down (which is the only way it is allowed to be operated in) 30-60 seconds warm up for each consecutive turn on cycle are sufficient. A complete datasheet can be found here. I already wrote about an amp with a PSU using 866As. Details can be found in the post about a 6CB5A amp with 866A rectifiers. This article also explains a possible method to provide a delayed high voltage to ensure proper warm up time.
As mentioned above, the 866A is still very well obtainable. Mostly with the ST shape bulb which has the same size as a 300B. Much rarer is the earlier globe type 866. Here a photo of such a version from RCA which was packaged in gorgeous boxes with a map of the world printed on them: 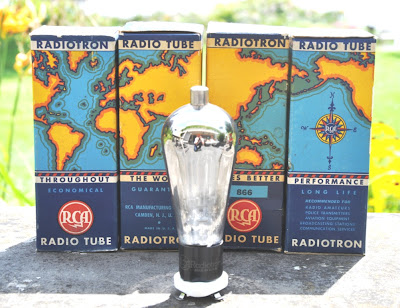 Here another 866A in ST glass and with brown micanol base, manufactured by Taylor. Note the careful padding which was applied to avoid damage during transportation: 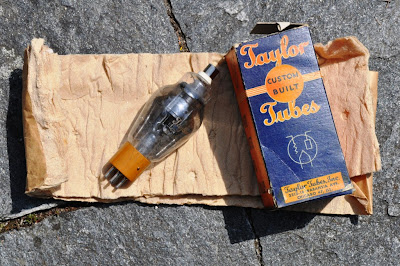 A small selection of 866As from different suppliers: 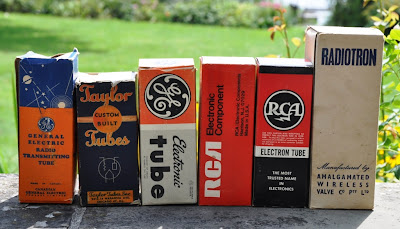 The last photos show some early work of mine with 866A tubes: 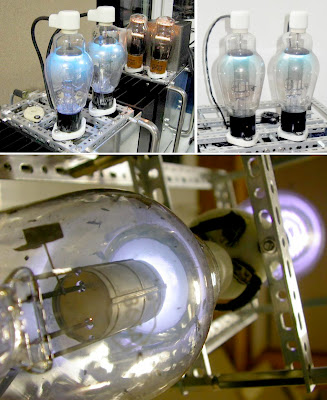 A fascinating tube! If you want to avoid the mercury but would like to have the same looks (except the blue glow) there is a near equivalent vacuum rectifier, the 836, which will be covered in a future tube of the month article.
Best regards
Thomas
Posted by VinylSavor at 10:14

Email ThisBlogThis!Share to TwitterShare to FacebookShare to Pinterest
Labels: 866A, Tube of the month