Tube of the Month: The E55L


This months tube is a wide band output pentode. The industrial tube type 8233 with the european designation E55L. 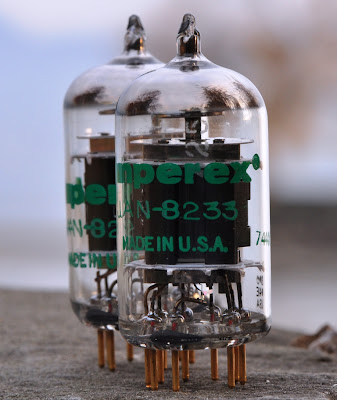 For LCR phonostages I like to use very high transconductance tubes like the telefunken EC8020 or Western Electric 437. Unfortunately these tubes are very rare and increasingly difficult to find. I'm often asked which alternative tubes could work in my LCR circuits. There is not much else available in terms of 'real' triodes. But there are some pentodes which can be transformed into high transconductance triodes by connecting the screen grid to the plate. 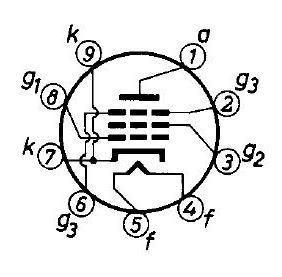 The E55L is one of them. It has been manufactured by such famous companies as Amperex, Mullard, Philips and probably others. The Philips datasheet classifies it as a special quality pentode designed for the use as wide band output tube. It comes with a 9 Pin Magnoval base. Triode connected it has a transconductance of 45 mS (45.000 micromhos) with an amplification factor of 30. This translates to an internal resistance in the region of only 600 Ohms. Perfect to drive a low impedance LCR network with a transformer with a slight step down of maybe 2:1. This means that it will still achieve a good gain in such a set up which is important for the use in a phono preamplifier. Another important aspect for this application is microphony. I have not tried the tube yet so I have no experience how well it is usable in such small signal applications. 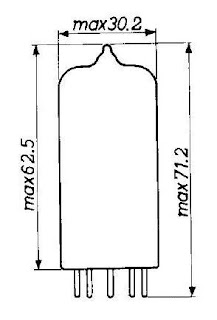 Of course it seems also perfect to be used in it's intended application, as output tube. Probably good for a single stage 'spud amp', triode strapped in SE with 2W. The tube is surprisingly compact for a power output tube. About 30mm diameter and just about 60mm high. I'm usually not very fond of high transconductance tubes as drivers for output triodes. Most of them do not offer enough headroom for my taste. I like to have at least 6dB of headroom in the driver. This tube seems feasable as a driver for output triodes. Due to the low plate resistance it would be perfectly ok to use it with a 1:2 step up interstage transformer which would yield the headroom I'm looking for. Of course it could also be considered to be used as a pentode. Many possibilities to use this tube. Many people have objections against the use of a triode strapped pentode. I have no issues with that. What matters to me is how a tube performs, it's linearity and of course the achievable sound quality. The triode connected plate curves which are shown in the datasheet look very promising: 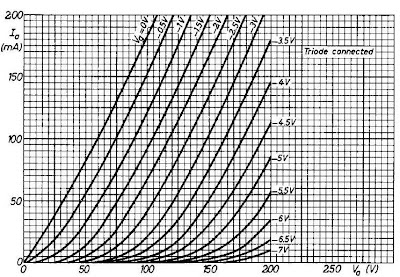 The curves look very linear. But how does it perform in real life? Here a scope screen shot of the plate curves taken from a sample: 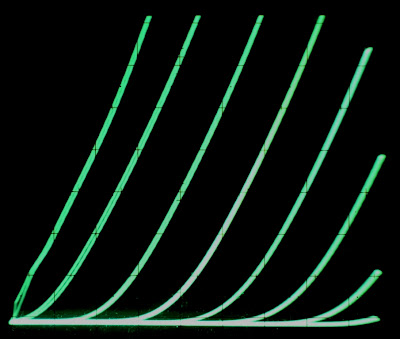 Looks very good to me! The first two grid lines are a bit closer to each other which indicates that it is better to stay clear of the 0V grid voltage. I anyways always insist on a large headroom and try to avoid that the grid gets more negative than -1V even when driven at full signal. The grid lines in the screen shot are spaced apart in 1V steps. I also noticed a good sample to sample consistency. It is fairly easy to find closely matching tubes. And this is matching plate curves not just matching at a single operating point.

Let's have a closer look at the construction of the tube:

This photo shows the peculiar shape of the plate. It is narrowed in the center, coming closer to the cathode and grid electrodes. Apparently it is just this part which is responsible for the tube characteristics. The next photo shows another interesting detail. The tube does not have three wire grids, just two. Grid number three really is a beam forming plate: 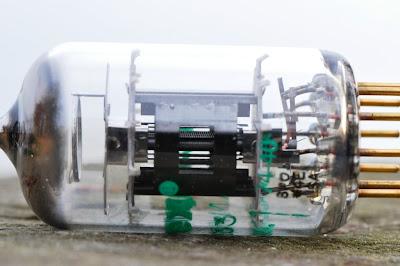 That is the shiny boxy structure which can be seen through the holes in the plate and which extends beyond the two micas which hold the plate. The next photo shows a close up of the grid structure: 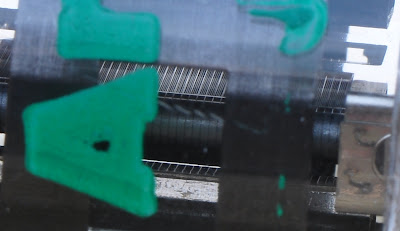 Note the precisly wound grid wires. The more coarsely spaced screen grid wound between the finer control grid and beam plate. In the upper right corner it can be nicely seen that the opening in the beam plate is exactly below the part of the anode which narrows closer to the grid structures. 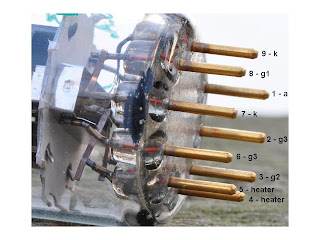 The photo on the left with a close up of the pins confirms that the grid nr 3 pins are actually connected to this box structure. This photo also shows the Magnoval base which is not to be confused with the very similar Novar base. The Novar based tubes have the exact same pin spacing as Magnoval tubes. Only the pin diameter is different. A Novar tube would fit into a Magnoval socket but have loose contact. Make sure to use the correct socket with this tube. Magnoval sockets are readily available both as old stock as well as current manufacture. 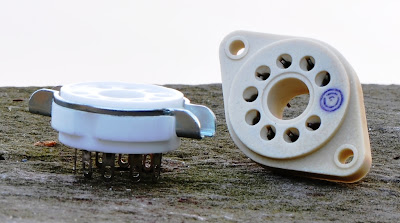 The photo above shows a currently produced socket from China on the left and an old production one on the right. 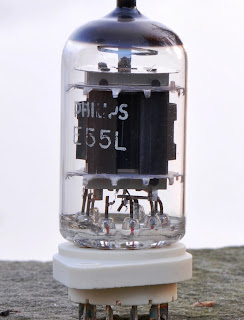 As mentioned above, this tube was made by various manufacturers. The Philips E55L shown on the right has the exact same internal structure as the Amperex tubes shown above. So they were probably made in the same factory.  This tube prominently displays a SQ logo on the other side which stands for special quality. The datasheet states a life time of 10.000 hrs for these tubes. Definitely a tube just waiting to be used for audio applications. I'm looking forward to give this very special tube a try. Most likely I'll first use it in a LCR phonostage. I will report about this in future posts. Stay tuned! 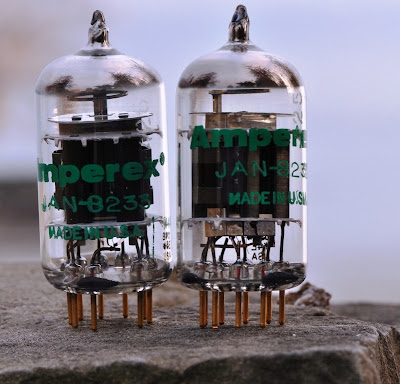 Email ThisBlogThis!Share to TwitterShare to FacebookShare to Pinterest
Labels: E55L, Tube of the month

As you might be aware from reading my blog, I'm using Lundahl transformers and chokes extensively. I'm especially fond of the LL1933 MC step up transformer which is my favorite. I actually prefer the mu metal core LL1933 over the amorphous core LL1931. Both are also available with higher step up ratios as types LL1943 and LL1941. This series of transformers is wound with Cardas copper wire.

Now they are also available with silver wire, the suffix 'Ag' distinguishes them from the standard versions: 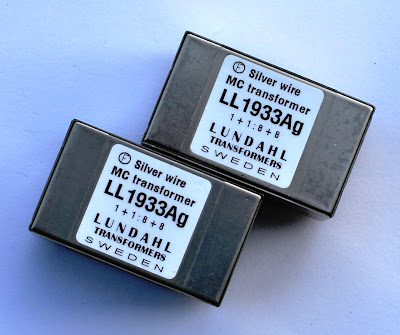 During the high end fair in Munich this year I met Per Lundahl and we discussed silver wound transformers. Apparently there is quite some demand and I also encouraged him to go for silver. The MC step up transformers are the first ones to be available as silver editions.

I got my hands on a pair LL1933Ag of the first production run and will compare them to the standard transformers which I use in my phonostages.

Stay tuned for another article about the impact of the silver on the sound of these transformers.

Thomas
Posted by VinylSavor at 15:52 4 comments: 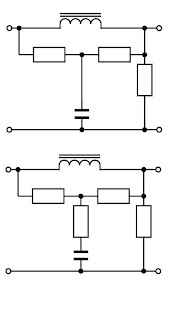 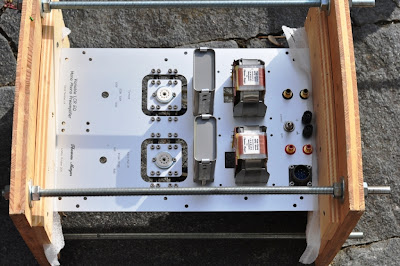 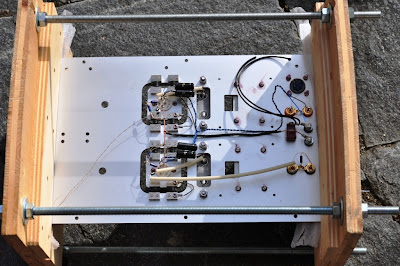 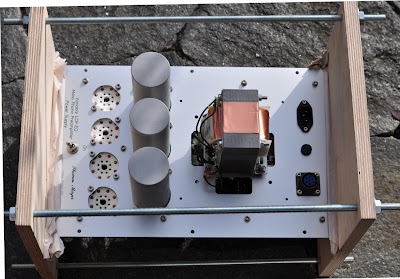 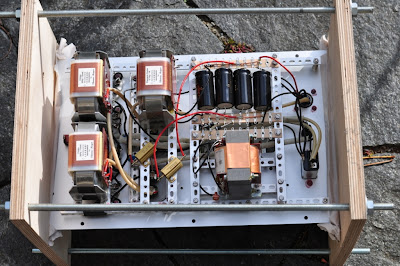 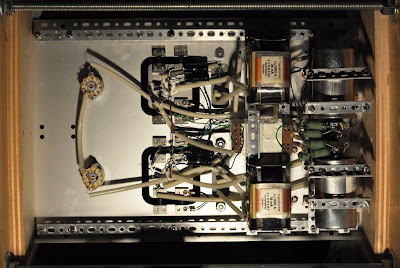 Thomas
Posted by VinylSavor at 00:08 4 comments:

Here some photos of a newly built Octal Preamplifier Mk2. The circuit is the same as already presented in previous posts. 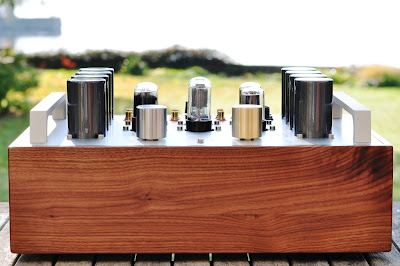 This time just a different color scheme, silver plate with capacitors in graphite grey metallic and a walnut frame. 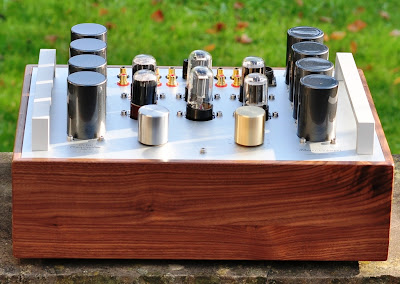 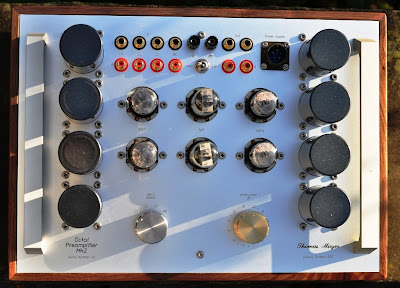 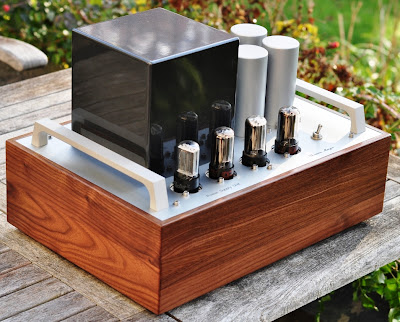 Here some photos of the preamp together with it's PSU: 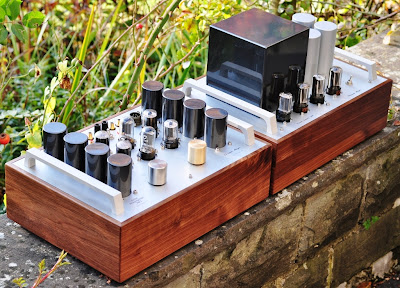 The inside of the preamp: 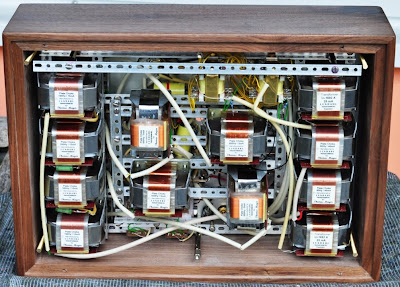 And the inside of the power supply: 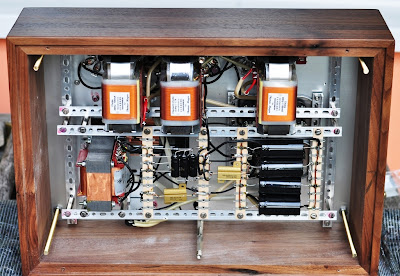 The different colors of the knobs for input selector and volume control are just a gag. Of course they can be easily replaced so that both are identical. 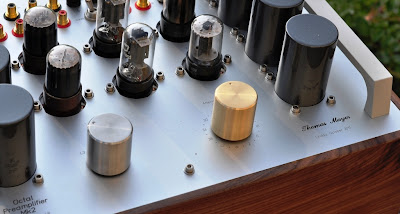 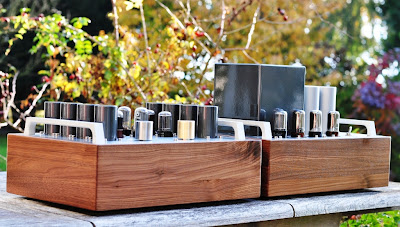 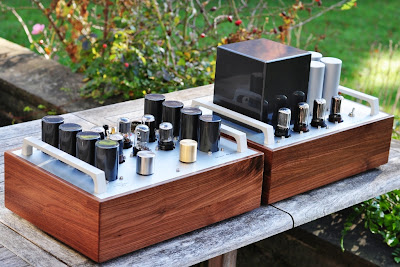 Thomas
Posted by VinylSavor at 12:31 4 comments: