This is probably a rather unusual choice of music but nonetheless an album I like: The soundtrack of the recent Disney movie Tron Legacy. For those who don't know the movie, it is a plot about a digital 'simulated' world in a computer. People get transferred into this world where they have to survive against 'programs'. This is a sequel to a movie which came out more than 25 years ago

Being kind of a nerd I liked the original Tron movie which came out in the early 80ies. That one did not have a special sound track, at least I don't remember noticing the music during that movie. Very different with the sequel. While the story line of the movie itself has some weaknesses, I still like it a lot. They picked up the story quite well from where the first movie ended more than 25 years ago. The visual effects are spectacular. Some of the scenes seem very nicely thought through and choreographed.
But what is best about this sequel is it's stunning sound track. The music is composed and arranged by the french house duo Daft Punk. They came into the music scene 1993 and released two remarkable albums: Homework and Discovery, I like these two albums a lot and will prbably write about them in another post. 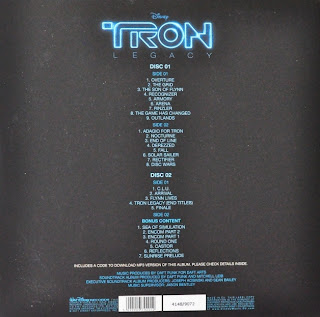 Daft Punk was an excellent choice by Disney. They wrote an amazing score without which the film would have ended up as rather mediocre. In fact the entire film is almost a long music video. In one of the scenes Daft Punk themselves have an appearance as the DJs in the 'End of Line Club'.
My favorite track is 'Arena' which complements the scene to which it belongs extremely well. The main theme repeats itself with some variations throughout the soundtrack. Very cool also the title 'Derezzed' which is played at the end of the movie when the credits are shown. 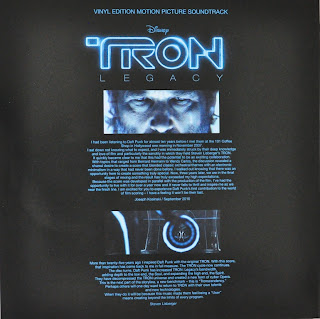 And the best of all: The sound track of a movie which is about digital worlds is available in analogue format on vinyl. Isn't that something! 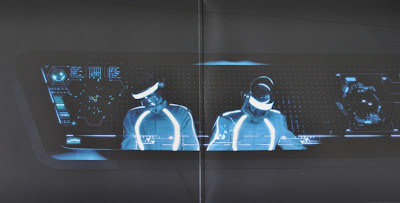