As mentioned in my previous post, I finished development of a new entry level line preamplifier to match the Octal Phono Preamplifier. In this post I will present the circuit of the signal section. 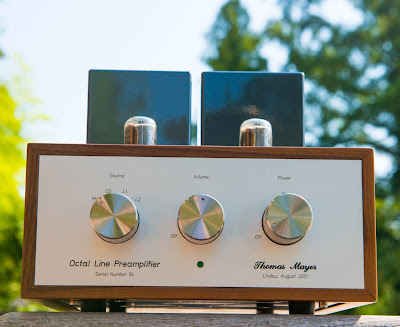 For many people the cost of a preamplifier with transformer volume controls is too high. So I came up with this rather classic and simple circuit, which keeps the parts cost down. This means it uses a regular resistive potentiometer for volume control and no transformer coupling. The signal is routed from the inputs through a source selector switch and from there into the volume control. In order to keep the input impedance high, a 100k pot is used. From there a single triode section provides some amplification and low output resistance. The goal was to avoid feedback circuits, cathode followers and the like, yet the output impedance should be well below 1k.

This is the circuit: 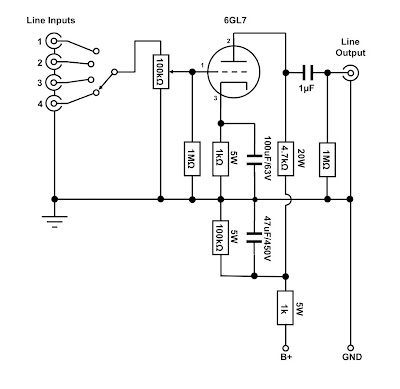 I chose the 6GL7 tube for amplification. This is a dissimilar duo triode with a high mu and a low mu system in one bottle. In this preamp only the low mu system is operational and the other section is left unused. Grid, cathode and plate of the unused system are tied to ground. The reason why this tube was chosen is because of the properties of the low mu section. It has a mu of 5 which will result in an amplification of about 4 (12dB) when RC coupled. This is not too high, so the volume control can be used in a sensible region, yet provides some gain which is needed to bring the output of the Octal Phono Preamp to suitable levels to drive a power amp. The plate resistance of the section which is used is a low 780 Ohms. It runs at about 25mA. So it provides plenty of drive for longer cables or power amps with low input impedance. Down to 10kOhm load should not be a problem for this preamp.

Let's go through the circuit in detail. Input selection and volume control should be pretty obvious. The 1M resistor from grid to ground provides a ground path also in case the wiper of the pot looses contact. The cathode resistor of 1k generates the bias. It is capacitively bypassed to keep the low output impedance and to avoid any loss of gain. With the 4.7k plate resistor the tube operates quite linear.

In the schematic a 1uF output coupling capacitor is shown. This is fine for power amps with high input impedances of 47-100k, as is typical for tube amps. If a solid state power amp is used which typically has an input impedance of 10-20k, the coupling cap should be increased to 4.7uF. The coupling cap should have a voltage rating of at least 450V. I used a 630V MKP. The 1M resistor from output to ground avoids any static charge build up if the preamp is not connected to a load. This avoids loud plops if the preamp is plugged into a power amp which is turned on.

Also shown is the B+ decoupling cap of 47uF and a bleeder resistor. The 1k to B+ functions as decoupling from the other cannel, since the preamp uses a common power supply. B+ voltage requirement is 300-350V.

The tubes can be AC heated without any hum. The heater should be referenced to ground with two resistors across them and their joint connected to ground. 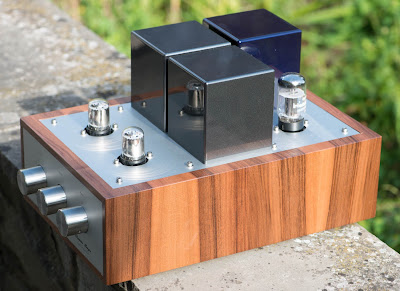 A simple and easy to build circuit which does it's job well. I have two variants of power supply circuits for this which will be shown in part 2.

The 6GL7 which is used in this circuit will get it's own coverage in the Tube of the Month post of September. Stay tuned! 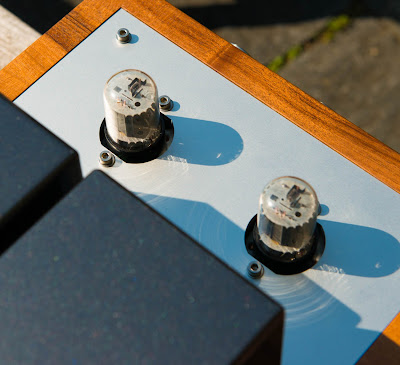