Oliver who built some amplifiers based on kits from me was so kind to share his experience...

Hi, I'm Oliver and I live in Brooklyn, NY. Some time ago Thomas asked me to write about my experience building a 10y/45/50 amplifier, finally here it is!

I've always been a music lover/collector but discovered tubes accidentally when I inherited a pair of Altec Model 19 speakers along with some old Quad 2 amps and matching 22 preamp. Like most children of the 80's I had no idea what those strange light bulb things were but they sure sounded nice so after some research and soldering practice the Quads were restored and my first tube guitar amp built.

Pretty quickly I was hooked! I discovered the long out of print Sound Practices magazine which helped feed my tube addiction and I began building stereo amps of various kinds but especially single ended types with the wonderful 45. I also became aware of Thomas from the Sound Practices 'homebrewer of the month' feature where he detailed very intriguing 211/211 amplifier with an elaborate 3 phase power supply, this captured my imagination and I immediately hunted to find some of the Tango NC-20 interstage transformers mentioned. 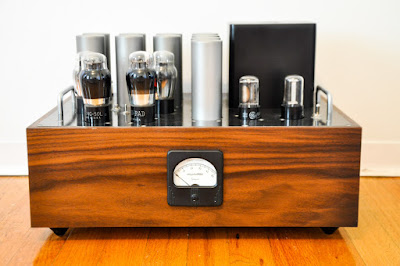 A few years and many amplifiers later I stumbled upon the Vinyl Savor Blog when Thomas first posted his 45/2a3 amplifier, As soon as I saw it I knew I had to have one. Before mustering up the courage (and finances) to build that particular amp however I decided to start with one of the simpler circuits generously published as the Single Ended Amplifier Concept. The basic design appealed on many levels, it was elegantly simple, had no cathode bypass capacitors, lots of iron including choke loaded power supply and was versatile in driver tube choice between 6j5/6p5/6n7, of which I had many examples. Another huge bonus was that I already had most of the Lundahl iron from a previously aborted project so the additional investment wouldn't be that large.

The Lundahl power transformer I used didn't have a centre tap on the high voltage winding so I settled on a hybrid bridge rectifier with 6ax4 and BY229 diodes and in the end chose 45 over 46 in the output stage, otherwise it was simply built as drawn. All the fabrication was done the old fashioned way (no CAD or CNC) with ruler and pencil, it was time consuming but relatively simple and all carried out in my garage with rudimentary tools. I tried as much as possible to remain faithful to Thomas' aesthetic and layered sub chassis approach using standoffs and aluminium angle stock to secure the many pieces of iron, it took a lot of planning the first time but after the layout was finalized and all the iron mounted completing wiring was very fast and now I am a big fan of this layered approach. 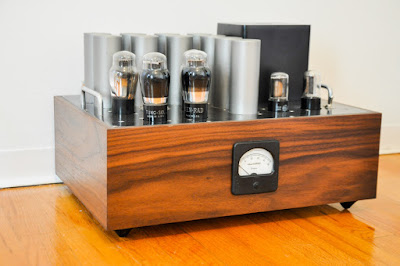 As often happens there was some trouble shooting to get things working correctly but once the problem was found (incorrect connection of the output transformer secondary) I was immediately impressed by what I heard. It seemed to magnify all the strengths of 45 tube and I couldn't find any audible weakness, especially impressive was the rock solid low end and the sense of focus and composure on more complex music. 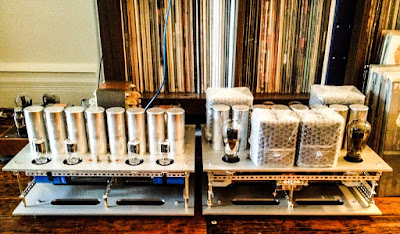 Before long my friend Daniel heard the music at my place and decided he needed to build a Thomas Mayer 10y/45 amp too. After the initial planning stage all the necessary iron was ordered from Thomas and we sourced the passive components ourselves, soon packages full of exotic parts started arriving from around the globe. Since I had some 50 and VT-52 triodes I wanted to try in the output stage I added a few features to the basic design including a switch arrangement to increase/decrease the B+ and 2 additional passively filtered DC filament supplies for the output tubes, also switched, to alter filament and bias voltage. Since I had larger Tango XE-60 output transformers I ended up with a larger footprint and made some slight changes to the existing layout, all the capacitors were moved to the top plate and the 6 additional transformers and necessary passive components were mounted inside their respective chassis. I also really wanted the impressive blue glow of mercury vapour rectifiers so with some help from Thomas we were able to devise a way to do this using 816a and the filament windings on the existing power transformer. The power supply also got a little extra reservoir capacitance and a dual switch arrangement for preheating those precious antique triodes, although the high voltage rises slowly enough with the 6ax4 damper diodes. 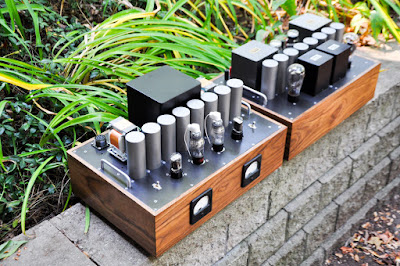 Again all the construction was slowly done by hand, so slowly that I was able to hear Daniels' finished amp before my own. Needless to say we were both extremely pleased by the results, the transparency and air that the 10y contributes to the top end is fantastic, realism and tone abound and it uncovers all kinds of previously hidden details. To me this is the ultimate realization of a 45 amplifier and something I will never let out of my hands. 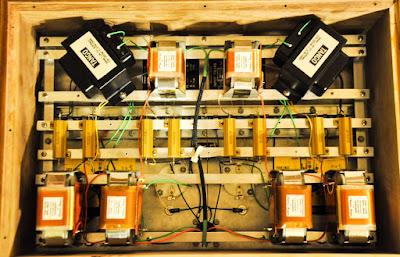 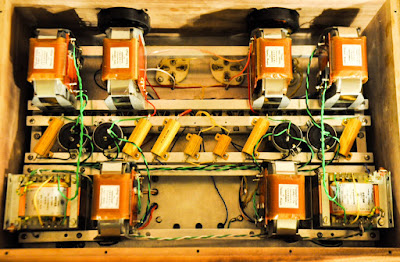 Since it was made with ease of modification in mind I've been able to try many combinations of DHT in both driver and output sockets and one of my favourites has been 801a/801a, although not an ideal match for the output transformers it was a very pleasant surprise and so lifelike the equipment simply disappeared leaving just music floating in space. Definitely something I want to investigate in the future. Also possible for the future is trying out the Elrog 300b which will fit right into the circuit with only the slightest modification. 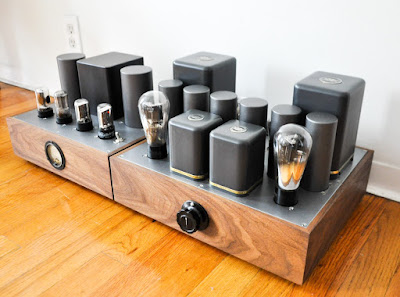 Lastly I wanted to share a recently finished project which is a redux of the initial 6n7/46 build. This time I used a set of NOS Tamura iron and decided to go with the separate bridge rectifier power supply for a no compromise approach. One drawback commonly mentioned of the Tamura transformers is the slightly narrow bandwidth but I certainly don't notice this, very clear and extended with simply beautiful tone. Next is a matching LCR d3a phono stage built up in the same style, can't wait to get my soldering iron in it's heated state again.

Big thanks must go to Thomas for sharing his wonderful designs and providing the critical parts to make them a reality. Always willing to answer my questions (of which there were many) and a great source of inspiration. I'd encourage anyone out there considering building one of Thomas kits to go for it. A great learning experience and a truly world class finished product, I simply can't imagine building anything better!

Many thanks to Oliver for sharing his story!