This months tube is a rather ancient triode, the RE084. The RE084 is a direct heated triode with a very low power filament. Presumably intended for use in battery powered equipment. It was introduced by Telefunken in 1927. 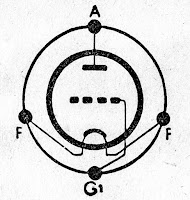 The RE084 had the Europa 4 Pin base, a base used by european manufacturers for directly heated triodes. The pinout is shown on the left. As mentioned above it has a very low power filament which only needs 80mA current at 4V. The intended use was as small signal audio amplifier tube in radio receivers according to the data sheet. It has an amplification factor of 15 and a plate resistance of 10kOhm. Philips made a similar tube which they named A415 and Valvo called theirs A408. I do not have any of these tubes myself, but thanks to my friend Josef from Vienna who lent me some samples of his collection of exotic tubes, I can present this tube to you today. None of the data sheets which I found showed plate curves. So I took them myself with a curve tracer. The settings are: Plate voltage: 50V / step horizontal, plate current: 5mA / step vertical, grid step 2V. 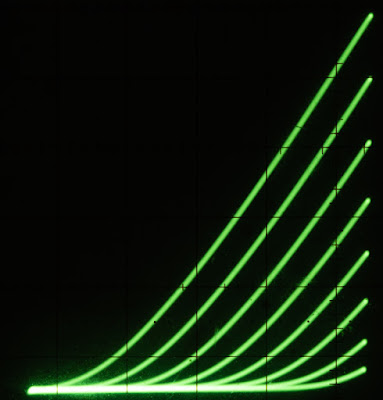 Very linear as can be expected from a DHT. Let's have a close look at the tube itself:

The tube came well packed in a Telefunken box with a data sheet: 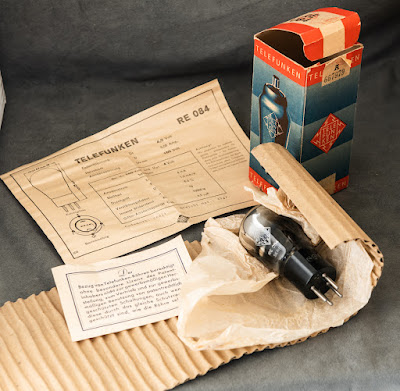 Some more views of the tube: 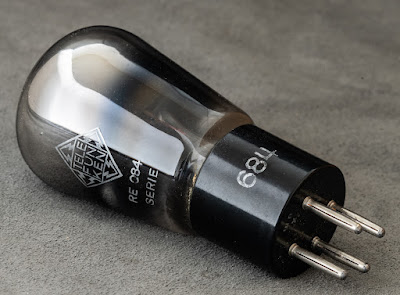 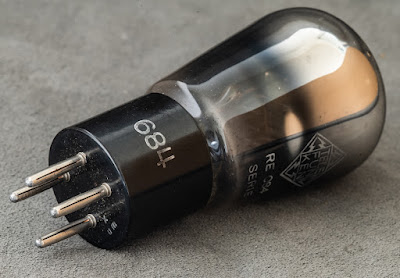 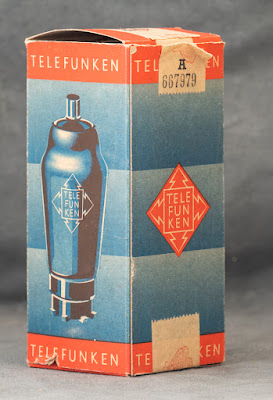 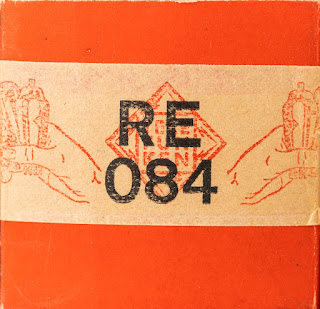 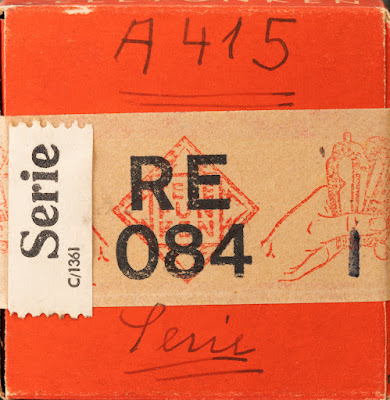 More pics of the tube: 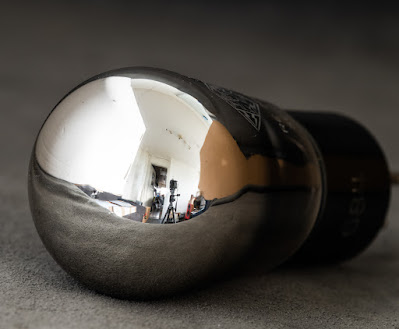 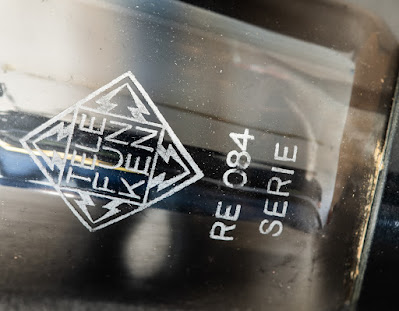 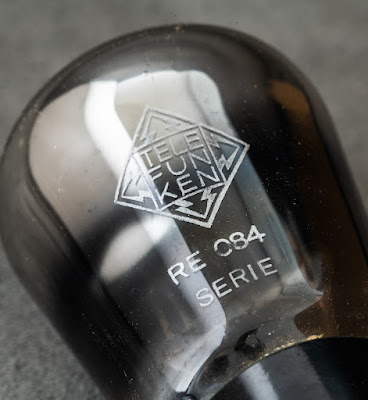 Scans of the sheets which were included: 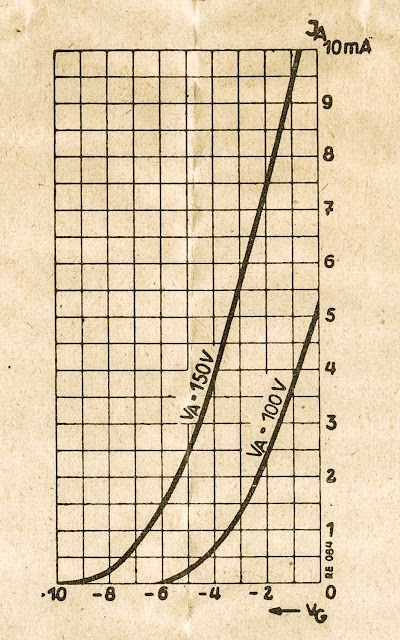 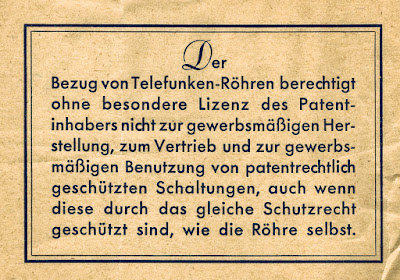 The electrodes are mounted horizontally directly under the top of the glass dome which is covered with getter. Due to the low power filament no glow is visible when the tube is turned on. Shining light into the tube from the bottom reveals a bit of the internal structure: Due to the scarcity of this tube and since it does not belong to me no dissection photos. Sorry!

Here we have a Marconi R.A. 408 /14. I did not find any data about this specific tube but the naming is similar to the A408 so it is probably an equivalent or very similar. Also since the filament spec is printed on the tube this makes it a safe bet. 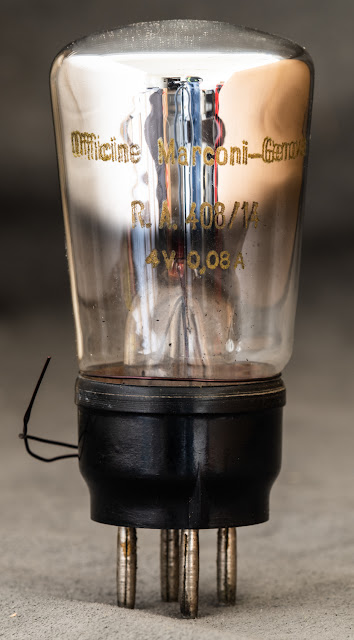 And a measurement on the curve tracer shows plate curves which are almost identical to the RE084: 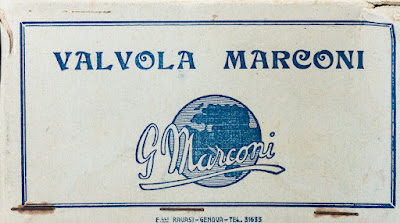 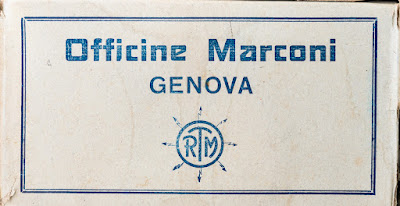 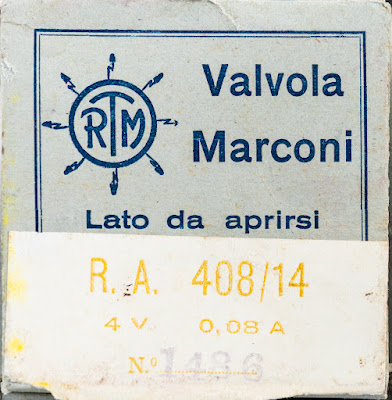 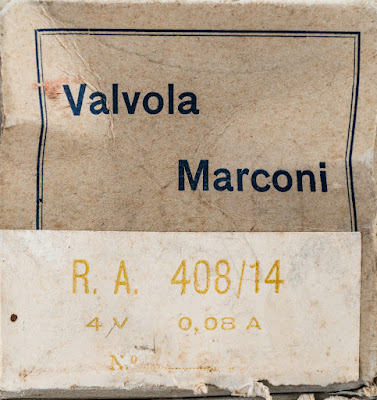 This tube has some kind of seal above the base. Probably from the finance ministry since tubes had a special tax on them in Italy: 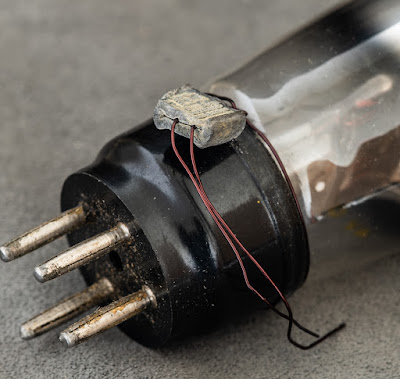 As with the Telefunken tube the electrode system is hidden under the getter. I hope you enjoyed the last tube presentation for this year. And thanks to Josef for providing the samples. Email ThisBlogThis!Share to TwitterShare to FacebookShare to Pinterest
Labels: RE084, Tube of the month