In this second installment of the tube of the month series I'd like to present the tube which I chose as driver in the single ended 6CB5 amplifier, the 6N7: 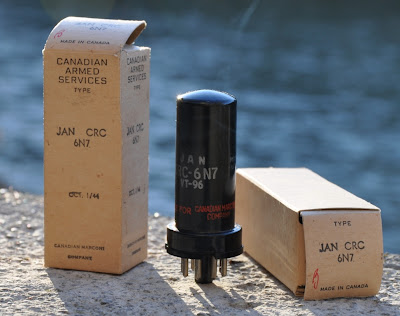 Another tube which is mostly ignored by the audio crowd, although it is actually quite well suited for audio purposes. It has a medium amplification factor of 35, a plate resistance which is still in a range which allows to use it in transformer coupled circuits or choke loaded. And most important: it is very linear. A detailed datasheet can be found here. 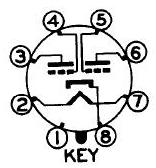 The tube has been developed for a Class B output stage. This is probably the reason why it is not so popular. It is a double triode. Both halves share a common cathode. Both triode systems need to be wired in parallel if the tube shall be used as a Class A driver. Again a practice which is not very popular among audiophiles. Unrightfully though. With both halves in parallel it can be used with interstage transformers like Lundahl LL1660. It has enough drive power to be used with smaller triodes like 45, 2A3, 801A and of course the 6CB5A triode connected. With it's reasonable high amplification factor it is perfect for a two stage amplifier concept.
The 6N7 is available in various different forms. The basic type with metal envelope as pictured above. The 6N7GT has a straight sided glass bulb and the 6N7G has the beautiful coke bottle shape. This tube was manufactured by all the big tube companies and is still available as new old stock for very reasonable prices. Here is a selection of 6N7s from various brands: 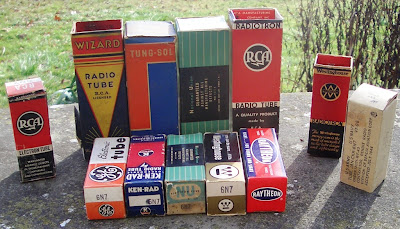 The three variants with the different shapes are electrically interchangable. All of them are very nice sounding tubes. Don't shy away from the metal versions. The fact that it is quite cheaply available (about $5 for NOS tubes) doesn't mean it is bad sounding. Most people avoid it because the glow is not visible.﻿ The 6A6 is the direct predecessor of the 6N7, it is electrically identical but uses the UX7 base instead of Octal. The 53 is yet an older version which shares the UX7 base with the 6A6 but has a 2.5V heater instead of 6.3V.
The next picture shows some of the different shapes:

From left to right: 6A6 (this one was only made in the coke bottle shape), 6N7G, two 6N7GTs, one with graphite coated glass the other with clear glass and a RCA metal 6N7. 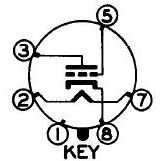 Another nice aspect of the 6N7 is the similarity of it's pinout to that of the 6J5, which is pictured on the right. Heater and cathode connections are at the same pins. The pins nr 4 and 6 which are used in the 6N7 for grid and plate connections of the second triode system are unused in the 6J5. A 6J5, which is basically one triode system of the popular 6SN7, will drop right into a socket which is wired for a paralleled 6N7 and will bias up correctly in a circuit which is sized for the 6N7. It will just provide less voltage amplification. The 6J5 has an amplification factor of 20. This will result in 3dB less gain. This might be just the right reduction if a system has too much overall gain.

So, if you are planning a project, check out the 6N7, it might be just the right tube.

Thomas
Posted by VinylSavor at 18:26

Email ThisBlogThis!Share to TwitterShare to FacebookShare to Pinterest
Labels: 6N7, Tube of the month