In this installment of the tube of the month series I'm going to present a directly heated tube. Not the usual triodes like 45, 2A3, 801A, etc, but I will start with a tube which can be regarded as an insider tip, the 46. 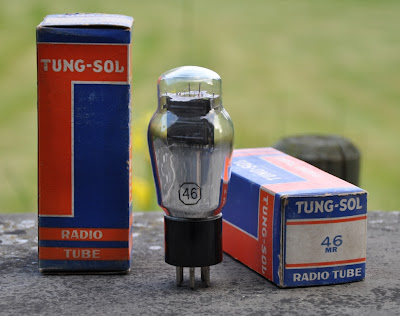 The 46 is not a 'real' triode but a dual grid power amplifier tube, not to be confused with tetrodes. This is maybe a reason why this tube is still overlooked and not as expensive as for example the 45. The typical audiophile is shyed away by the fact that it is not a real triode. 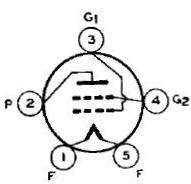 Unrightfully though! Since it is still largely overlooked, smart amplifier builders can build a great DHT SET amp with this tube and don't have to hunt down sought after tubes. The 46 was intended to be used as a triode. Depending on how the second grid G2 is connected it is suitable for Class B or Class A use. It has the 5 pin UX5 base. G2 tied to the plate yields a triode which is quite similar to a 45. Detailed information can be found in the datasheet.
Plate resistance is a bit higher compared to the 45, it draws a bit more filament current and will result in slightly less output power. It will drop into most circuits designed around the 45 by changing the socket. Just make sure that the filament transformer can supply the current the 46 needs. Op points can be kept the same as long as the plate voltage stays below the limit of 250V for the 46. The tube has a larger bottle than the 45, same size as a 2A3. 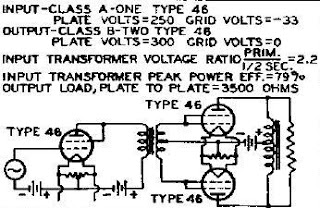 So what was the reason why such a tube was developed? The idea was to use the same tube as driver and output tubes in Class B push pull power amps. Both grids tied together will result in a tube for Class B use. A pair of 46 will deliver a whopping 20W in Class B. To reach this power the grids need to be driven positive (Class B2 operation). This will require a power tube as driver which can deliver the necessary driving current. Of course other suitable power tubes could be used as a driver, but the idea was to have the same tube type and socket so only one type of tubes would be needed to be kept as spare parts. I'm not sure if that ever was such an advantage and if many commercial amps have been done this way. But it is a neat idea. You could even go a step further and use another pair of 46 as rectifiers. Both grids tied to the plate will yield a directly heated diode. Two of them could be used for a full wave bridge rectifier with a power transformer with center tapped secondary.
Class B operation is out of fashion for audiophiles so todays use of the 46 among DIYers will be mainly as Class A output tube. It is also well usable as a directly heated driver with interstage transformer for laqrger triodes like 300B or even 211.
The 46 was manufactured by most of the major vacuum tube companies and is still available in NOS quality for low prices. The earlier variants came in globe shape glass but most are made with the common ST shape coke bottle. Below is a picture of the military variant of the 46, called the VT-63. 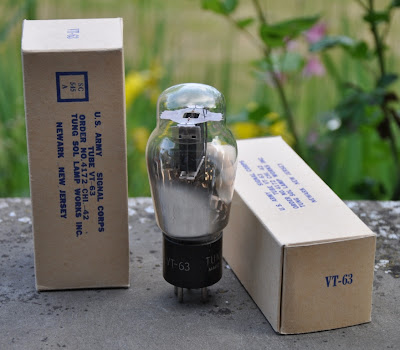 I have a 46 single ended amplifier in the making which I will present soon. Stay tuned!

Thomas
Posted by VinylSavor at 20:24

Email ThisBlogThis!Share to TwitterShare to FacebookShare to Pinterest
Labels: 46, Tube of the month