Here are some photos of two recently finished single ended 45 amplifiers. Both with different driver tubes, and different color schemes. 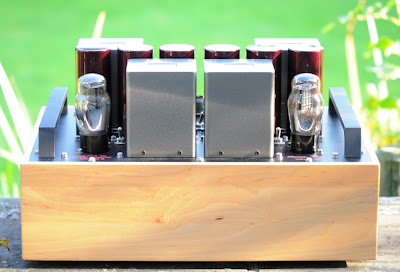 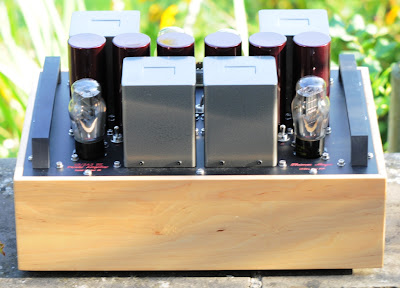 The wooden frame is made of birch wood. 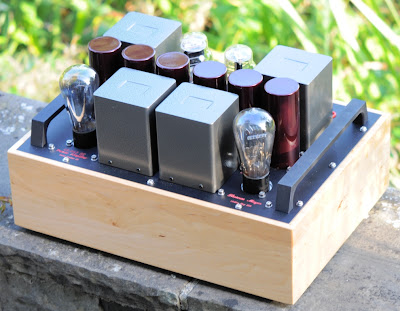 The power supply is external in a chassis in the same style: 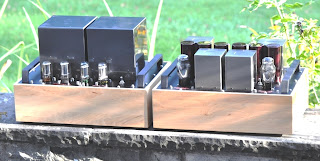 The high voltage power transformer and capacitors in the power supply are hidden under aluminum covers varnished in a metallic graphite tone. 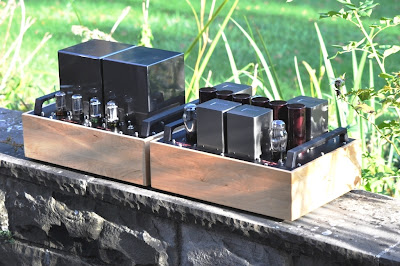 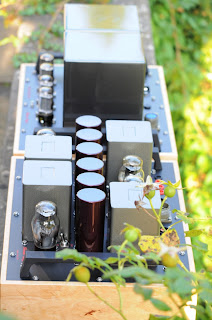 External power supplies offer the advantage of good isolation between the signal section and PSU. But there is also a very practical reason for such a two chassis solution. In a single chassis the amplifier would just be too big and heavy with all the transformers and chokes. This amp has 6 signal transformers: output, interstage and input transformers. The input transformers are placed inside the chassis. There are 4 power transformers in total. One for B+, one per channel for the DC filament supplies for the driver tubes and one for the AC filament supplies for the output tubes. The AC filament transformer is placed in the amp chassis, close to the output tubes. There are 10 chokes in total for the smoothing of voltages. Two for each of the driver tubes, for the filaments (LCL) and 6 B+ chokes. Two of the B+ chokes are in the PSU chassis, a common LCLC filter for both channels. In the amp chassis the B+ voltage is split between the channels and between drivers and output. Each of the 4 signal tubes is fed by it's own LC segment for good isolation. 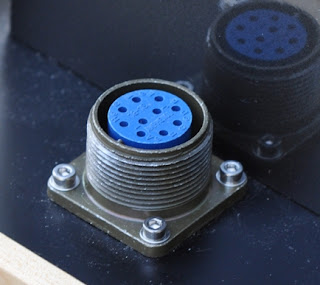 A 10 wire umbilical connects PSU and amp. It hooks up to heavy duty Amphenol screw jacks. A female jack on the PSU side and a male jack on the amp. This way no voltage carrying pins can be touched even if any end of the umbilical is not connected while the PSU is turned on.
The PSU side is shown on the right. The screw type connectors and jacks provide a good and tight connection.

The photo below shows the connector on the amp chassis. 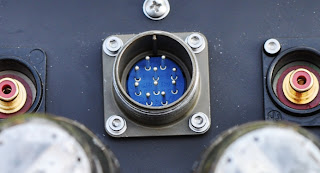 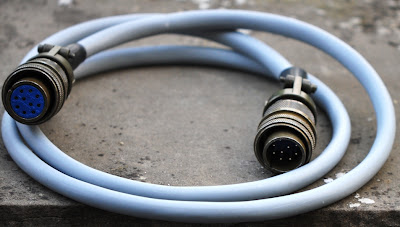 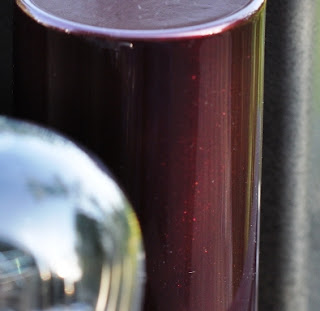 The varnishing of the caps was done at a car paint shop. It requires several steps to get this kind of surface. First the caps get cleaned and the surface smoothed. Then the varnish is applied in 2 colored coatings, followed by a third clear coating for the shiny look. The photo on the left is a close up showing the metallic texture. The next photos show different close up shots of the caps. 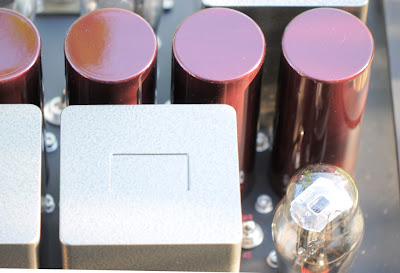 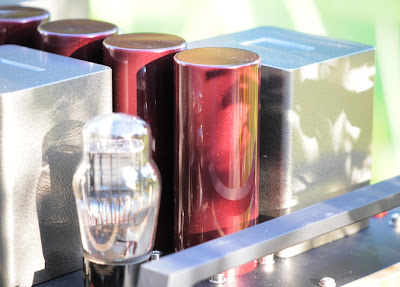 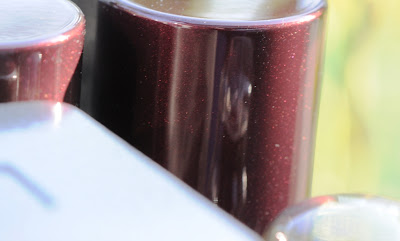 Next some photos of the amp with indirectly heated driver, 6A6. It comes with a silver metal plate. The same ASC caps but with a matt silver coating. Same Tango transformers: 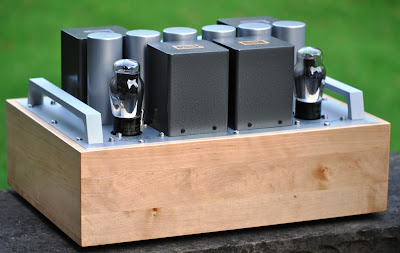 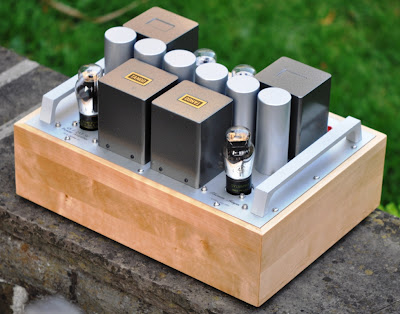 Also with external PSU. This time only with one cover, the caps are visible: 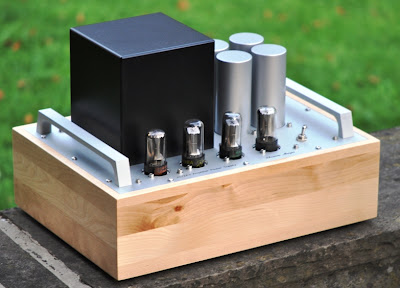 Both amps have switchable output sections. A switch placed nearby the output tubes selects between 45 or 2A3: 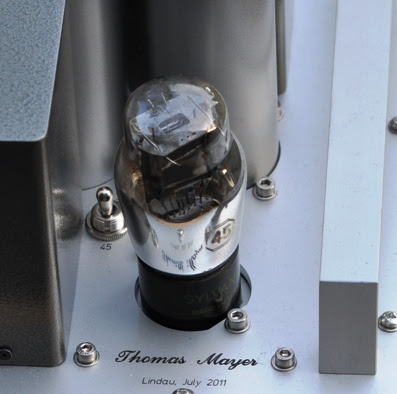 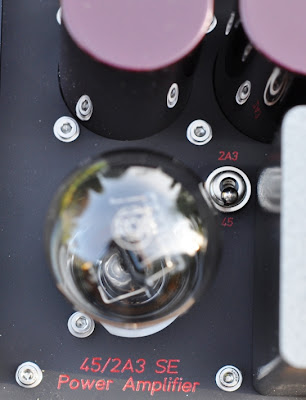 The amp with directly heated driver has also the input tube switchable, between 26 and 10Y (801A can be used as well). The switch in the middle is the ground lift: 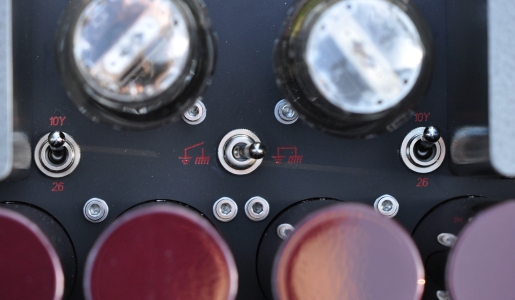 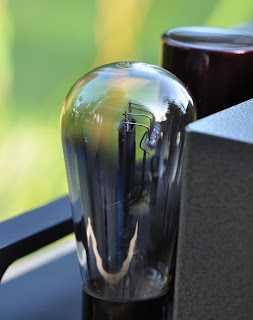 When it comes to tube preference, I like the 10Y as driver best. It combines the resolution of the thoriated tungsten 10Y with the sheer magic of the 45. An ideal combination in my opinion. As output tube I prefer the 45 over the 2A3. The option to switch to 2A3 offers the possibility to boost the power to 3.5W compared to the 1.5-2W of the 45. This helps if less efficient speakers need to be driven. Among the 45s the globe versions are my favorites, like RCA UX245 or Cunningham CX345. 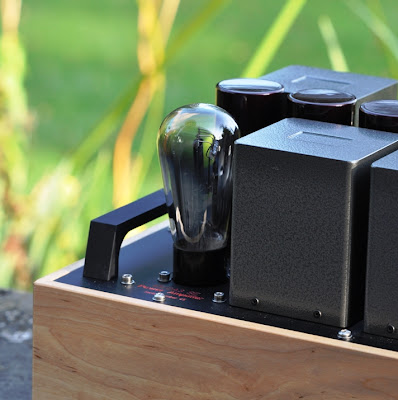 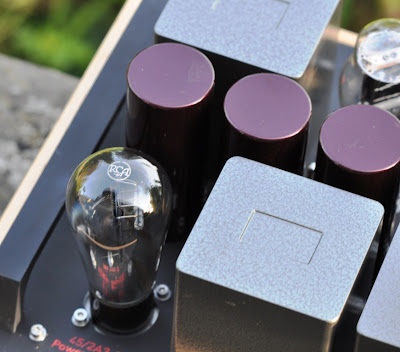 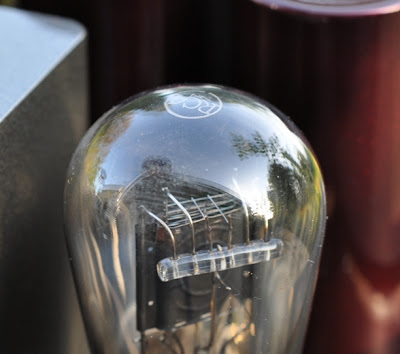 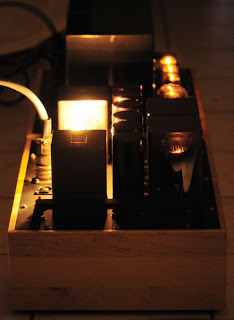 The picture on the left was taken in the dark to show the glow of the tubes. The amp is equipped with 10Y driver tubes and UX245 globes. See how much brighter those thoriated tungsten tubes glow compared to the oxide coated filament of the 245. 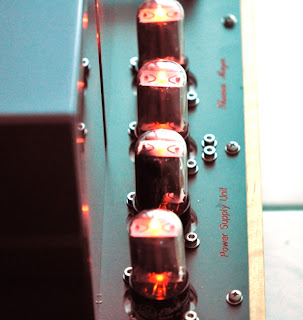 The photo on the right shows the PSU with the 6AX4 TV damper tubes in operation. 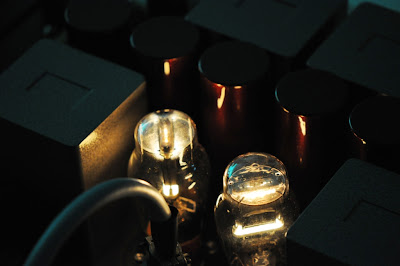