A while ago I reported about Visseaux 6N7 which tend to fail after some time. Today I have another report of 6N7 with problems. A while ago I got some Mullard 6N7GT with a tube order. I was quite happy about the purchase. I didn't know that Mullard made 6N7. They have very nice internal construction with larger cooling fins applied to the plates and grid rods than the ususal 6N7. 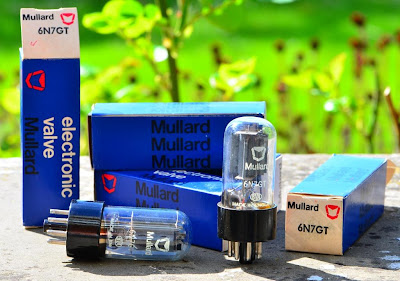 They tested nicely on the curve tracer like any other NOS 6N7. I installed them in an Octal Preamplifier for a customer and they performed well.

Unfortunately that preamp produced a bit more hiss than normal after a while. I first suspected the triodes in the phono input section, but it turned out that it were the 6N7s which became noisy.

I compared the Mullards with some photos of other 6N7s on the internet and they look remarkably like russian 6N7s. Not sure if these are relabelled or not. The glass is a bit taller on these. The plates look very rigid with extended cooling fins. Here a photo of a Mullard compared to a Raytheon 6N7:

They have larger cooling fins also on the rods which support the grid (Mullard on the left, Raytheon on the right) :

The tubes are operated well within their limits in the circuit. The heater voltage is biased slightly positive by about 20V to minimize heater cathode leakage. The heaters are fed with DC close to the nominal voltage, staying slightly below 6.3V.

I have not experienced such issues with any other 6N7 in an Octal Preamp. Some of these preamps are in use since years still with their first tubes installed. Both tubes in the affected preamp developed the noise, so it is not just an individual tube failure.

If you are using an Octal Preamp and experience some noise, check which 6N7s are installed.

Thomas
Posted by VinylSavor at 10:54

Email ThisBlogThis!Share to TwitterShare to FacebookShare to Pinterest
Labels: 6N7