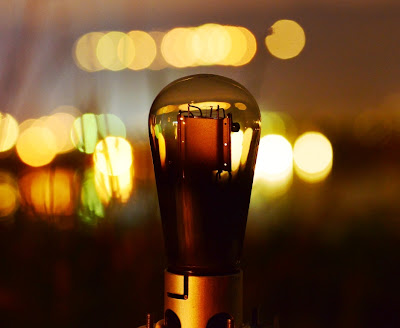 Like the 801 and 841 the 842 is a transmitting triode from the 800 series of tubes (which is obvious from it's number). It has the same thoriated tungsten filament. 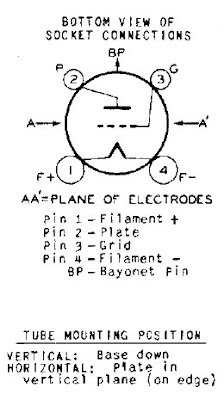 As these it has a UX4 base with the same pinout which is shown on the left. The filament requires the same 7.5V at 1.25A to operate. The amplification factor (mu) has been reduced to 3. The 801 has a mu of 8 and the amplification factor of the 841 is 30. With the reduction of the mu the plate resistance (rp) also went down to 2500 Ohms which is about half the plate resistance of the 801. This makes the selection of a suitable output transformer a bit easier. While the 801 requires a transformer with a high primary impedance (I prefer 14 to 16 kOhms). The 842 datasheet lists a suggested load of 8kOhms. I would probably use it with a 10kOhm transformer. At the maximum plate voltage of 425V the tube can deliver up to 3W output power in single ended operation. This is achieved at a moderate plate current of about 30mA. While the 842 is less demanding in terms of impedance requirements of the output transformer, it needs a very high drive voltage at the grid for maximum output power. The datasheet lists a grid bias voltage of -100V for the operating point which will deliver 3W. This means it needs a driver which can deliver a whopping 200V peak to peak. Not an easy task if this swing should be delivered with low distortion and preferably with considerable headroom. 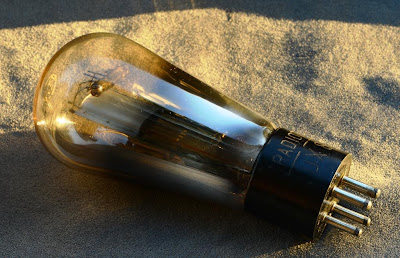 I have not used this tube yet but will certainly give it a try in a single ended power amp. The 841 would probably be a good candidate as a driver, or the 801 with an input transformer to get sufficient gain.

The plate curves look very linear, so this should make an excellent sounding amp: 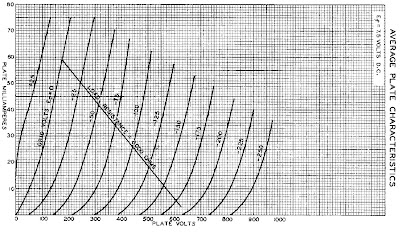 As always, let's verify if the actual plate curves hold up to what the datasheet promises: 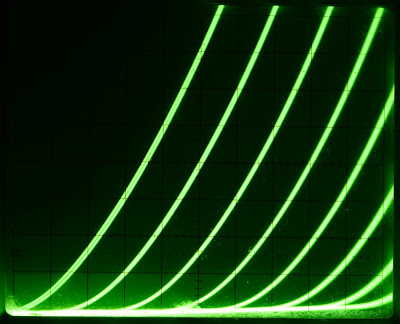 Certainly a good candidate for an amplifier project. Unfortunately this tube seems to be quite rare. All I have are these three globe tubes: 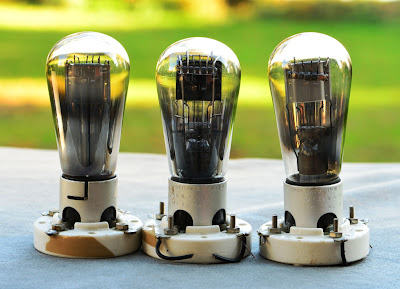 A pair of RCAs with grey plates and a single DeForest with blackened plate. I hope to find some more of them, particularily also ST shapes. If you happen to have some 842s which you are willing to sell or trade for anything else, please contact me. 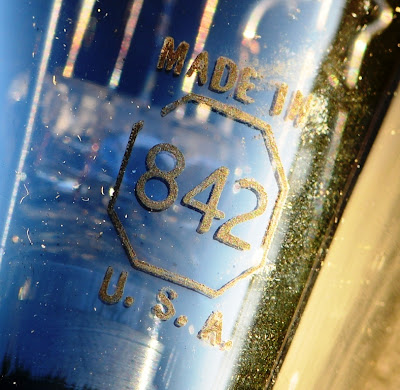 Let's have a closer look at the DeForest: 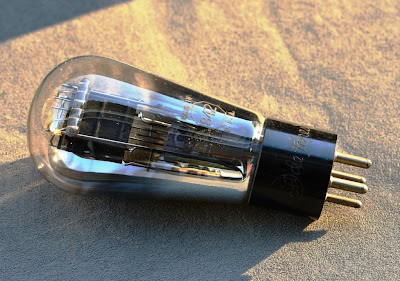 The electrodes are aligned by wires which are fixed in a stem of glass: 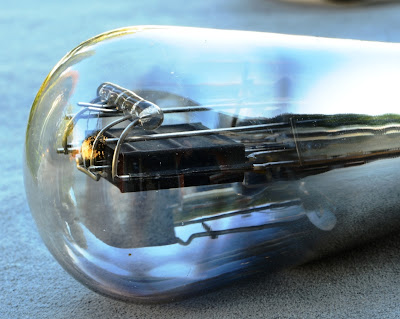 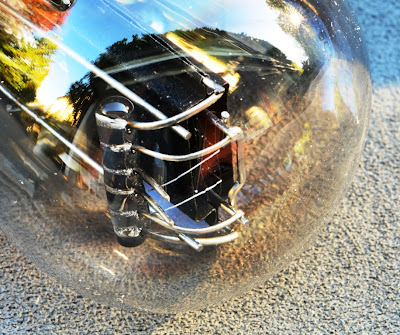 A side by side comparison: 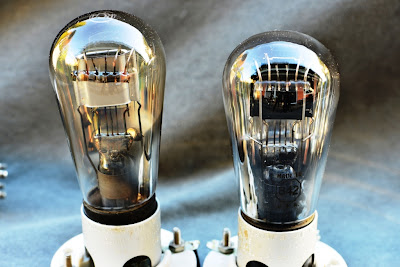 The same electrode alignment with the glass piece: 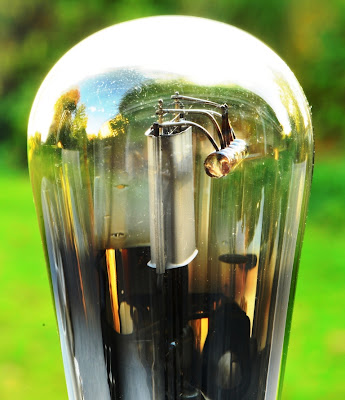 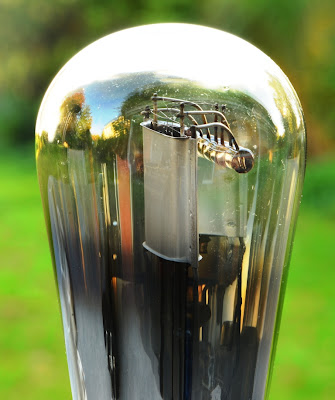 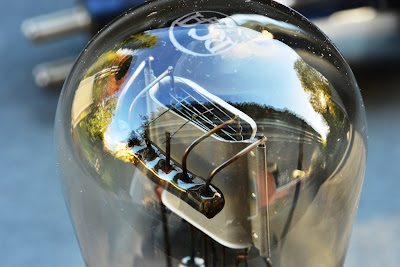 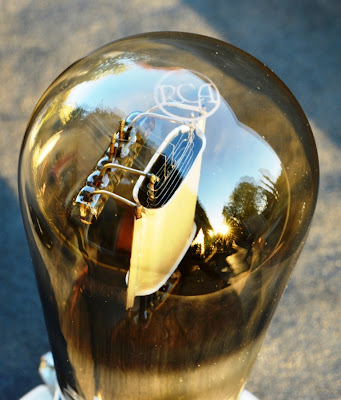 The next photo shows how the filament is suspended from two hooks on the top: 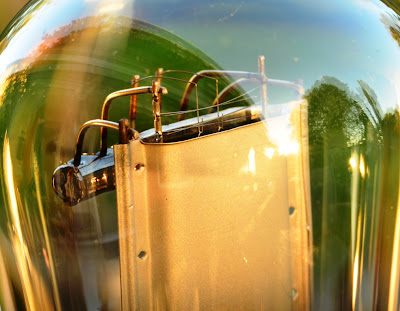 A close up of the filament lit up: 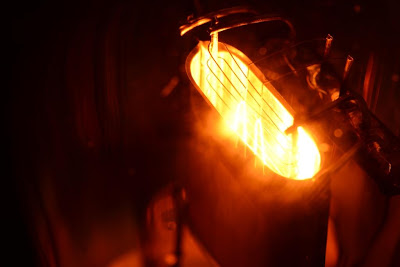 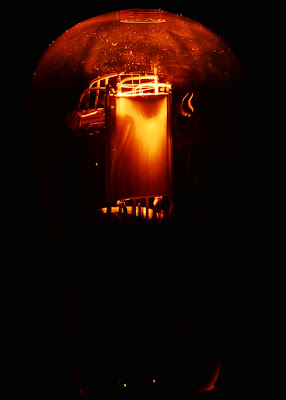 I hope you enjoyed this presentation of the 842. Stay tuned for another tube from the 800 series next month! 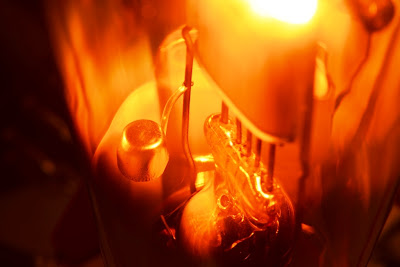 Email ThisBlogThis!Share to TwitterShare to FacebookShare to Pinterest
Labels: 842, Tube of the month