After all this talk about tubes and technical stuff, it is about time that I write about some music again. This post is about my favorite Jazz musicians who are still alive: Medeski, Martin and Wood. 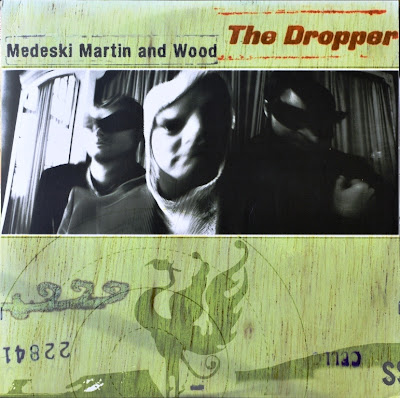 Actually it is quite difficult to categorize their music. While Jazz probably fits best, they have a very unike style. They once said about themselves that they don't swing, they groove. This describes it very well. There is not much swing in their music, they improvise a lot. For some people's tastes their music can appear as very disharmonic and hard to listen to sometimes. Some tracks require to be listened to several times to discover their beauty. But they always groove. A lot!

Most of that groove is contributed by the keyboarder, John Medeski. He plays pretty much everything with keys. Mostly organ. He is brilliant on the Hammond B3. Chris Wood grooves along with the bass. He is capable to get incredible nuances out of his instruments. The percussionist, Billy Martin brings in the rythm. He plays anything that you can hit upon.

Medeski Martin and Wood have the ability to carry over their unique style from record to record. Yet all their albums are different and new. Occasionally they team up with guitarist John Scofield who complements them nicely on the album Out Lounder which they recorded as Medeski, Scofield, Martin and Wood. 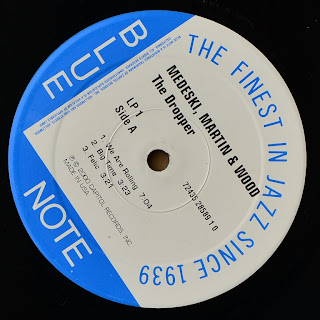 I picked the album The Dropper as an example, which was released on Blue Note Records in 2000. This album is recorded in the typical Blue Note sound. A bit on the dark side with lots of tone and color, yet very transparent and detailed. The first track opens in a quite wild style. You immediatly hear what they are up to. Large parts of the album appear as if they are improvised, which they probably are. They are famous for their jigs which are entirely just improvised. These musicians are probably the most brilliant improvisers alive today. It seems as if they just start playing their instruments. After a while some kinds of themes materialise and they just groove along. Almost always when I listen to their music, I discover something new.

Side B of LP1 of this albums is a bit calmer than the first one. Some passages almost with some hint of melodies. The first side of LP2 opens with a piece which is dominated by Martins bass play, supplemented by percussion and weird sounds, heavily echoed which creates a beautiful mix along with groovy keyboards. The second track on that side is also very typical. It opens with organ grooves which just give some hints of a melody. But the melody never really develops and they just get carried away. 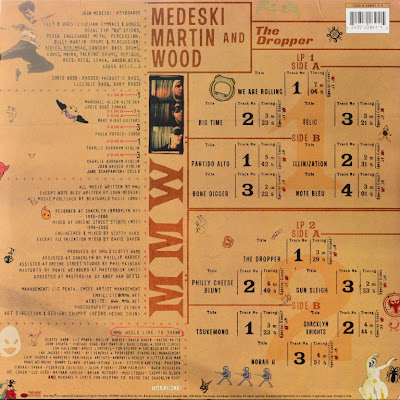 On the last LP side, Medeski shows his skills on the piano in some calmer relaxing tracks.

MMW do a lot of life gigs and they are brilliant at that. I once had the chance to attend one of their concerts in Vienna, which was a blast. I was especially amazed by John Medeski. For some pieces he used what appeared to be a Hohner harmonica for kids. That is a harmonica with keys. He attached a hose to the mouthpiece so he could hold it in front of him and play it like a keyboard. It was amazing what kind of sounds he produced with this toy.

Check out the MMW website for life gigs and news about music releases.

I discovered MMW in New York City, where they are actually from. One of their albums was playing in a music store. I asked an employee of the store about the music which was playing and bought it right away. Most of their albums have also been released on vinyl. The vinyl is worthwhile to get, the records are always carefully mastered and of good pressing quality.

Their music is always extremely passionate. I hope they will tour through Europe again soon. I will visit their gigs again when they come over.