In the recent posts I already showed the different components of this amplification chain which consists of a D3a LCR phono stage, a 10Y line preamplifier and two 45 mono blocks which can use either another 45 or a 10Y as driver. In this post I will show some photos of the complete system and write a bit about the sound. 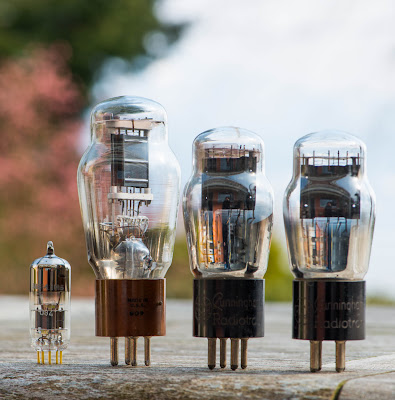 All the components are currently set up in my small system in the living room:

The source is a Scheu turntable with a SME M2 tonearm and Lyra Skala cartridge. Speakers are the Rho from David Haigner. These small speakers cope surprisingly well with a flea power amp like a SE45. 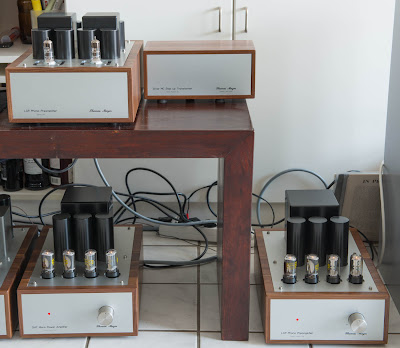 Phono section in the top left corner, external MC step up transformer with a silver LL1933Ag. The power supply of the phono is in the lower right corner. A close up of the PSU: 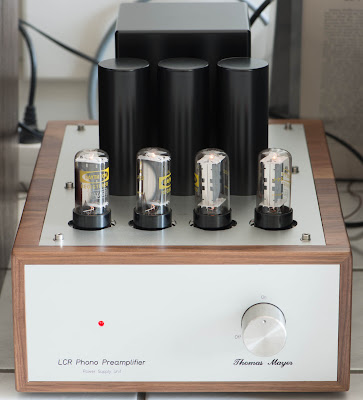 This phono stage has enough gain even for very low output MC cartridges if used with a suitable step up transformer. It has a balanced output with very low output impedance. It is suitable to drive a step up transformer in a line stage if additional gain is needed. It sounds very detailed with exceptional voice articulation, as is common with LCR EQ phono stages. The circuit with generally low impedance is very low in noise and hum. If connected to a transformer input of the line stage with 1:4 or 1:8 step up, it can even take the signal straight from my MC cartridge without the MC step up and hum and noise are still not objectionable. No appreciable microphonics or noise from the D3a tubes. 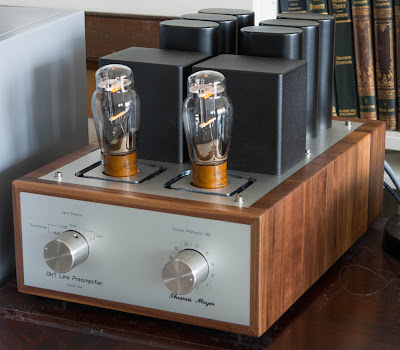 The linestage can be operated with all tubes from the 10Y or 801A family. This kind of linestage remains my favourite. It combines the magic of single ended directly heated triodes with extreme resolution. Thanks to extensive smoothing of all voltages it adds no appreciable noise of it's own. Microphonics are controlled by the vibration damped sub assemblies for the tube sockets.

The line preamp has two separate transformer inputs providing either 12 or 18dB additional gain if needed. Besides these there are two regular high impedance line inputs. The center setting of the input selector mutes the line stage: 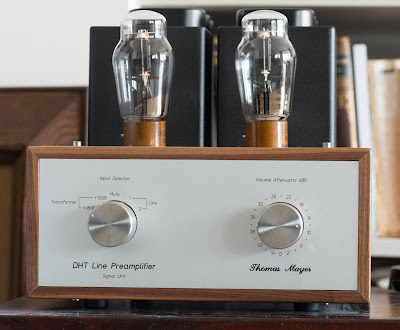 This line stage uses another variant of the Tribute line out transformer with the secondary implemented with 24 steps for volume control. At the maximum setting it has a 4:1 step down ratio for low output impedance, which is needed to drive the power amps with step up transformer at the input. The linestage PSU: 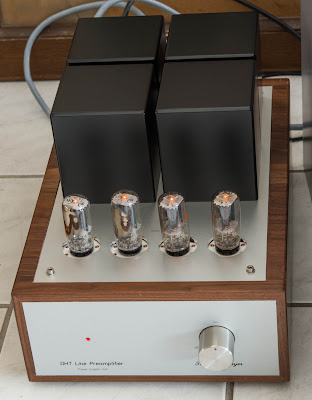 I will show the assembly of this line stage in another upcoming post.

And finally the power amps: 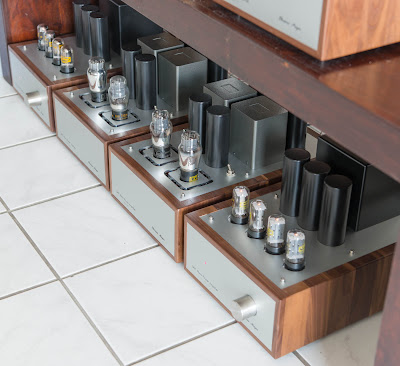 These are currently set up with 45 drivers. Many have asked me already how I like the 45 as driver compared to the 10Y. At first I was a bit skeptical about using the 45 as driver. It has very low gain which makes the power amp quite insensitive even with the step up transformer at the input. But it works extremely well. It has a very musical and lush sound, without softening too much or loosing detail. Kenny Burell's guitar on the album 'Blue Bash!' is extremely colorful with lots of twang. Albums with mostly electronic sounds like 'Touch' from Yello sound very atmospheric. Elvis' voice on 'fever' is almost intoxicatingly beautiful.

When switching to the 10Y or 801A as driver, volume needs to be adjusted lower since these have more gain. With the thoriated tungsten filament triodes in the driver sockets, the amps sound a bit more down to earth, with increased resolution, especially in the treble. The difference is not huge though. Which one to prefer is a tough call, for many records which are a bit on the harsh side, the 45 rounds things a bit more off. As much as I like the double magic with a 45 driving a 45, the thoriated tungsten driver is my favourite. Luckily there is a switch to choose the right driver depending on the mood.

Thomas
Posted by VinylSavor at 15:20