I was excited when Daft Punk released it's new Album this year, but didn't really like it at the first listen. So it went into the record rack where it stayed unplayed for a while. Only recently I pulled it out again and the more I listen to it, the more I like it. 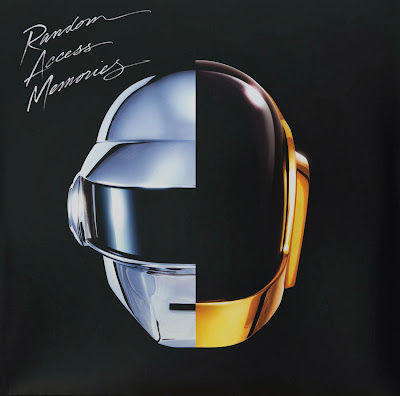 With Random Access Memories, Daft Punk created a new album which sounds very different from their previous ones yet their unique style is still present. The album opens with a rather soft track 'Give life back to music' which sounds very retro 70ies Disco. Funky guitar, the voice modified with a vocoder. The second track, 'The Game of Love' continues like that, maybe they over did it with the vocoder here. In the third track, the last on side one of LP 1, Giorgio Moroder appears as guest. 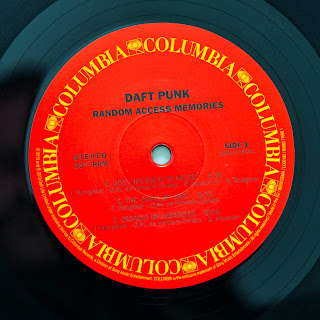 Moroder was a pioneer of electronic music in the 70ies and influenced many musicians, obviously including Daft Punk. In this track Moroder narrates about how he started his career. Again funky 70ies style guitar in the background with some bass. Very cool and totally non-commercial. A nice tribute by Daft Punk to one of their role models. Side two of the first track starts with a ballad like title called 'Within' again with heavily vocodered voice. The second track 'Instant Crush' starts similar to the first one, but gets a bit faster with more aggressive guitars towards the end. Nothing really special. Side two ends with the best title of this side. 'Loose Yourself to Dance'. Not as much over use of the vocoder. Funky guitars. This is also a title which is played often in the radio. 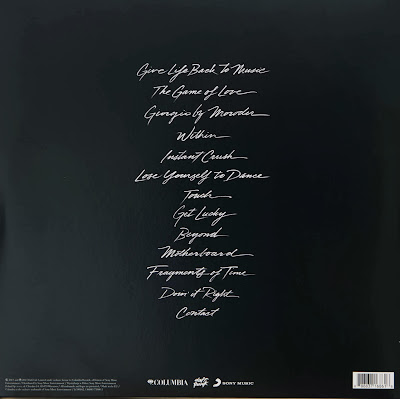 LP 2 starts off very differently with atmospheric electronic sounds which resemble the early synthesizer music style of the 70ies. As electronically altered voices start to narrate, some sounds kick in which could be off the sound track of a 70ies Science Fiction Movie. Then the title turns into a ballad, dominated by vocals. A cool and relaxing track. The second title on this side 'Get Lucky' is probably the most played as it was in the charts as well. Funky guitars and a smooth driving rhythm, very listenable.

The last side starts with some orchestra which reminds of some typical film sound tracks. It later changes into synthesiser music which resembles the sound of Daft Punks Sound Track of Tron Legacy. The side continues with a mix of very different tracks. Although the overall music style is rather non-commercial, Daft Punk seems to have hit a certain nerve with this album since it is selling quite well.

The album was released on Columbia/Sony Music. The pressing quality of the vinyl is excellent. Very low noise. The recording quality is very good as on other Daft Punk albums. The record comes with a beautiful booklet: 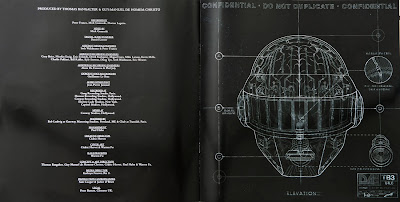 An album worthwhile to add to the collection. It might take several listens before you appreciate it. Get the vinyl and savor it!

Thomas
Posted by VinylSavor at 15:00