This article shows the assembly process of the power supply unit of the 45/2A3 amplifer which was presented in an earlier post. 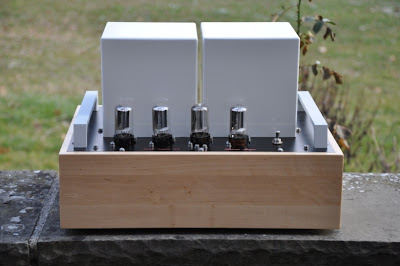 The photo above shows the completed Power Supply.

The series of pictures on the left illustrates the assembly process of the PSU step by step.

The first photo shows the metal plate which holds all components. It is mounted into an assembly frame. On/Off switch, sockets, B+ power transformer, B+ filter caps are already mounted on the palte as well as fuse holder, connectors for mains and the umbilical.

The second photo shows the under side of the plate. Here it can be seen how the caps are fixed. Some initial wiring is already done: Heaters of the rectifier bridge (Graetz) which uses 4 6AX4 TV Damper tubes. Also the high voltage AC from the power transformer to the bridge is already done.

B+ is smoothed via a choke input filter with two LC sections. Filament supplies are LCL filtered. The first LC section is placed in the PSU, so 2 filament chokes, one for each channel.

The last photo on the left shows the completed wiring of the inside of the PSU. Rectifier bridges for the filament supplies have been added, using Schottky diodes. Each filament choke is followed by 40.000uF smoothing capacitance. 4 10.000uF caps are wired up in parallel on each side.

The PSU is ready to be fired up and tested. The sound of this all DHT amp is fantastic. The 26 complements the 45 very well. Depending on taste or mood, the driver can be exchanged for the thoriated tungsten filament 10Y / 801A family tubes which give increased resolution, especially in the treble. This amp is supposed to be used in an active 2 way set up. It will power a midrange / treble horn. But the amp can be used full range as well. Currently no input transformer is added. This way the amp has very low voltage gain (about 0dB). This fits perfectly to a 2-way system with an highly efficient horn and less efficient bass. Not much level adaption to the bass is necessary, just some minor fine trim in the crossover between preamp and power amps.

Below a picture of the amp and power supply together. The amp is equipped with ST shape 45 and 26 tubes: 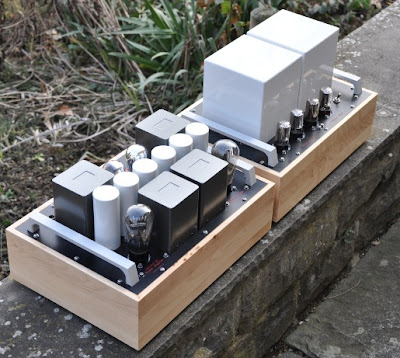 Thomas
Posted by VinylSavor at 16:50