Ever since I started building tube amplifiers, the 211 was among my favorite tubes. In fact the very first power amp which I built used the 211 as an output tube. This first amp evolved through several stages and finally ended up in huge monoblocks with 211 drivers and even bigger 3 phase power supplies. Those of you who are familiar with the Sound Practices magazine might have read my articles about this amp and the 3 phase power supplies.

After I started to go commercial with my amplifier designs, I decided to build a scaled down version of this amp. It used a single phase supply, and a smaller but still directly heated driver, the 801A. Power supplies were still external so that the whole amplifer ended up in 4 chassis and has a weight of more than 100kg.

This is a photo of one channel of the amp:

Tango interstage and output transformers, NOS paper in oil caps in the power supply. DC heating for both driver and output tube using a purely passive LCL filter per tube. The sound of this amp is excellent and very close to that of the bigger one with 211 driver. The amp was publicly demonstrated at the ETF 2009 in Stella, France. Yet for many the sheer size of this amp with 4 chassis in total is a bit overwhelming. Here is a photo of the complete set: 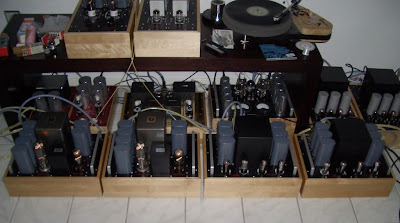 The 4 chassis in the front row are just one stereo amp! 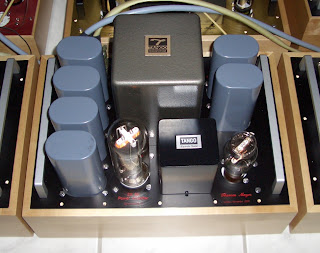 Also the cost of such a 4 chassis beast is quite high. The use of the finest Tango transformers contribute a good part to the overall cost. Also quite significant the expense of 4 chassis. Since the 211 is operated at max B+ voltage, very high quality umbilicals and PSU connectors need to be used which are rated for the voltage, again a cost driver. Yet the 211 and 845 tubes are quite popular and many people need more power than can be obtained from smaller tubes. So the idea for a yet further scaled down 211 came up. The actual development of a smaller version was triggered when Lundahl announced the availability of a new output transformer with a high 20k primary impedance, the LL1691B. Twice the primary impedance of the 10k which is commonly used in 211 designs. This should ensure a more linear operation of the output tube and provide a lower output impedance.
As mentioned above a big cost driver are the 4 chassis. Also the elaborate power supply with choke input filtered B+ and separate DC supplies for output and driver tubes. Some simplification is necessary there. Of course a good way to make the amp simpler is the use of an indirectly heated driver. Possibly a similar architecture as presented in the single ended amplifier concept series. This means a two stage approach. While this is fairly easy with smaller triodes, it is more of a challenge for a 211 if the same level of gain and headroom shall be reached.
Since I already had good experience with the 6HS5/6HV5A family of tubes as output triodes (this will be coverd in upcoming articles) I always wanted to use them as drivers too. They have an extremely high amplification factor of 300. Their plate resistance is still in a range which enables transformer coupling. See the datasheet for details. The amplification factor is even high enough so that the interstage transformer can be wired as step down. This should give a nice low impedance driver which even allows the 211 to be pushed into Class A2 territory. A suitable interstage transformer can also be found in Lundahls portfolio, the LL1660/25mA. Even if the interstage is wired in 4.5:1 the overall gain is still enough so that no input transformer is needed as with the 801A/211 or 211/211 versions. This makes the design more widely usable with almost any preamplifier.
Normally the high plate voltage requirement of the 6HS5/6HV5A is a disadvantage but since we already have B+ in the range of 1300V for the 211, the supply voltage for the driver can be derived from the 211 output stage B+ via a separate LC decoupling stage. This further simplifies the amp.
No compromise should be made in terms of capacitor quality, so no electrolytics in the B+. Also the amps should be as hum free as possible, which makes DC filament supplies necessary for the output tubes. Since the DC filament supply has a massive impact on the sound quality, no other approach than the well proven passive LCL filter is considered.
As mentioned above, a big cost driver is also the choke input supply for the B+. Especially at these high voltages very massive input chokes are needed since they have to withstand a large AC voltage amplitude across them. Therefore another approach will be used. A voltage doubler supply, but with tube rectification. This enables the use of an existing power transformer, the 400mA universal B+ transformer as was shown in my article about power transformers. Since the driver tube has a compactron base, a TV damper with the same will be used for the rectifiers, the 6CG3. The 6CG3 is one of the strongest TV damper tubes. It is capable of 350mA DC each. In a bridge configuration two of these can deliver 700mA! In a voltage doubler arrangement, each rectifier has to deliver the full current which is consumed by the load, still the theoretical maximum of 350mA which two 6CG3s can deliver in a voltage doubler is more than adequate for a mono amp.
This leads to a design which is outlined in the schematic below: 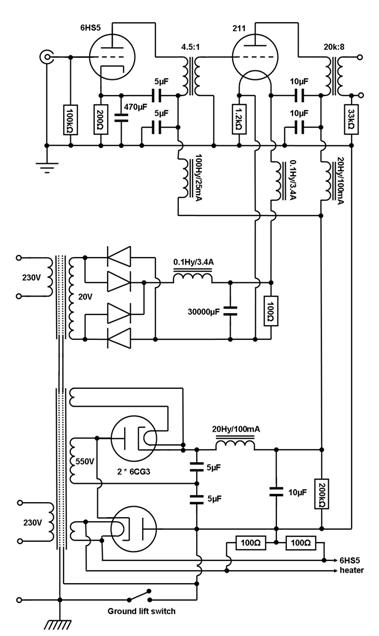 Although this is a 'scaled down' amp it is still a beast, 4 transformers (output, interstage, B+ and filament) 5 chokes (2 filament, 3 B+) and a large array of paper in oil caps per channel. For the oil caps the same 5uF/2kV types as in the 4 chassis amp will be used. Each 10uF cap value in the schematic will be done with two of them in parallel. No way all these parts would fit into one chassis for a stereo amplifier. The concept will be built up as mono blocks.
In the second part the assembly process will be shown. Stay tuned.
Best regards
Thomas
Posted by VinylSavor at 18:40