Tube of the Month: The 6HS5

This months tube is a very special type with some extraordinary properties, the 6HS5. This is a quite 'modern' tube, developed in the 1960ies. It's application was high voltage regulation for the acceleration voltage of color TV picture tubes. It was intended as a pulse type high voltage regulator. 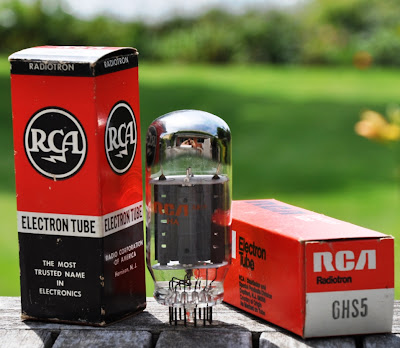 This tube is a beam triode. This means it has another electrode between grid and plate. Similar to beam power tetrodes, it has a beam forming plate. What makes this tube so unusual are it's extremely high amplification factor of 300 together with a transconductance of 65.000 micromhos! This results in a plate resistance of about 5kOhm which makes the tube usable for LC or transformer coupling. Thus it's full amplification can be utilized. 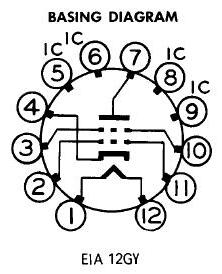 The 6HS5 has a 12 pin compactron base. The compactron socket was introduced by General Electric. The purpose of the many pins was the possibility to integrate multiple systems within a single envelope. The 6HS5 only uses part of the available 12 pins. Control grid and beam forming plate are brought out to two pins. Only one of them needs to be connected. The beam forming plate can be connected to the cathode at the socket. There is a family of similar tube types which all share almost the same electrical parameters and have the same basing diagram: 6HS5, 6HV5A, 6HZ5, 6JD5. They only differ in the heater current and some have 35W plate dissipation instead of 30. I work mostly with the 6HS5 due to it's rather modest heater current of 1.5A at 6.3V. 30W seems ideal for the usage as an output tube. In single ended confuguration this would yield about 7W. More like 8W with the 6HV5As 35W max plate dissipation. These tubes are available in abundance from almost each reputable tube dealer at ridiculously low prices. Why are they so overlooked by the audio crowd? 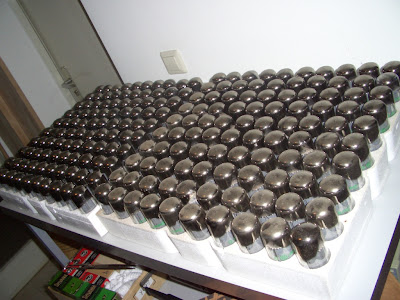 Well, nothing comes for free. While the tube has exceptional transconductance paired with a very high mu, it requires a rather high plate voltage to operate. In single ended Class A, over 1000V B+ is needed to achieve sensible results. This is probably the main reason why it is not so commonly used, besides the 'TV tube stigma' which causes many very interesting tubes to be ignored by audio designers. 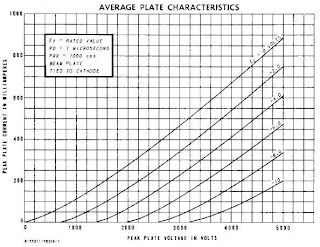 An important factor for audio use is the linearity. When I first discovered this tube in the tube manuals, I thought there must be some disadvantage why it is not used. It's probably not very linear. Back then I did not have any plate curves. So I ordered a few 6HS5 and tried them in a test set up. Linearity was exceptional given the other parameters of the tube. In the meantime I also found datasheets with plate curves. See picture on the right.

The curves in the datasheet compare well with my measured results. The picture below shows the plate curves of a actual tube, taken with a curve tracer. This is only a small section of the curves since the tracer only reaches about 350V. As mentioned above plate voltages beyond 1000V are needed for reasonable results. Still this small part of the curves shows that it is very well usable for audio. 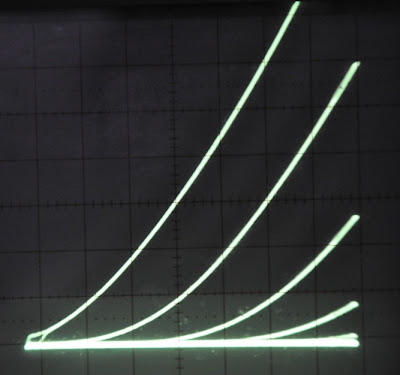 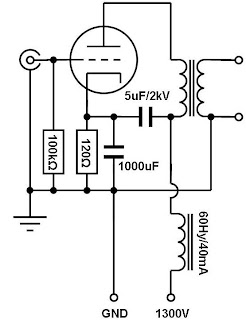 The schematic on the left shows the circuit of a power amp with the 6HS5. Due to the high amplification factor, no driver or input tube is needed. This makes a so called spud amp possible with this tube. The awkward term 'spud amp' has a somewhat funny history. An amp with one tube per channel is a 'one tuber'. Tuber is also an expression for a potato. That's why these amps are also called potato amps sometimes. And spud is just another synonym for potato. So all which is needed is the output transformer, a cathode resistor with appropriate bypass cap and a high voltage supply. The schematic also shows a decoupling choke and the decoupling cap is connected in ultrapath fashion, my favorite topology for transformer coupled stages. The tube operates at about -3 to -3.5V grid bias. So up to 7V peak to peak input voltage is needed for full power out. That's about 2.5V RMS. A bit above the typical line level, so it is preferred to drive such an amp from a pre amp with some gain. Below is a photo of a single ended power amp using one 6HS5 per channel: This circuit can be easily scaled up to achieve more power by paralleling tubes. A Parallel Single Ended verison with two tubes per channel delivers twice the power: 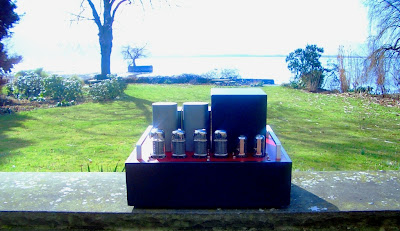 This scheme can be even scaled further. Below a photo of Quad Parallel Single Ended mono blocks. These deliver solid 30W single ended pure Class A: 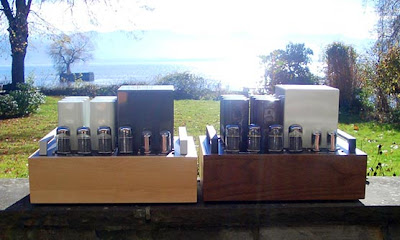 Close up photos, showing the glow of the tubes. The blue glow is normal and does not indicate bad tubes: 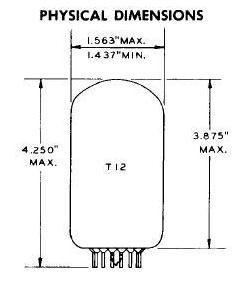 I will cover details about this family of amplifiers in an upcoming series of posts. But the 6HS5 is not only suitable as output tube. I already introduced it as a driver tube in my recent 211 amp. Here the high B+ voltage is already available in the amplifier, since the 211 has a similar B+, so the plate voltage for the driver could be derived form the output stage through a separate choke and decoupling capacitor. Other applications are possible as well. I have successfully used the 6HS5 even in phonostages. Both in single ended and fully differential configurations. Some care is needed to control microphony in a phonostage and it needs well filtered B+ and DC heater supplies in this application. But it is managable. A very versatile tube which provides many possibilities of use for creative DIYers! But how does it sound, you might want to know. The sound of an amp is not determined by the tube alone, but the whole concept. A simple circuit like this has much less parts in the signal path which can alter the signal. This gives the chance to build a very direct sounding amp with high resolution. Kind of like a single chassis speaker without crossover. The 6HS5 does not have the refinement and ultimate musicality of a directly heated triode. But it compensates a lot by the complete lack of a driver stage. Since it uses so few parts, better parts can be chosen and in fact this is mandatory to achieve a good result. The sound of the amp is ultimately determined by the tube, the output transformer and the ultrapath cap. Due to the low part count excellent results can be achieved with a moderate budget. An amplifier with directly heated output tube and the same power rating would require to spend at least 3 times as much on parts to surpass the sound level of such a 6HS5 amp. Since it is indirectly heated no elaborate filament supply is needed. It can be AC heated without any hum. In single ended configuration a well executed 6HS5 with a top quality output transformer like the mentioned Lundahl and paper in oil capacitors gives a very nice mellow tone with little coloration not very different from a 45, but with more power. 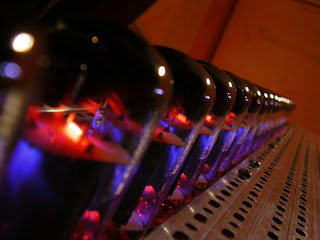 This tube would actually also be quite suitable for a multi channel amp or for an active system. Multiple 6HS5 amps which share the same PSU can be easily integrated into a single chassis. I did build something like that for the European Triode Festival 2004, 4 stereo amps (8 channels) in a single chassis for a 4 way active speaker. This consisted of 4 SE amps using one 6HS5 each, two PSE amps with 2 tubes each and 2 parallel push pull amps with 4 tubes each. Even the linestage was integrated using yet another 6HS5 per channel. So 18 6HS5 tubes in a single chassis. The photo on the left shows an impression how that looked like. 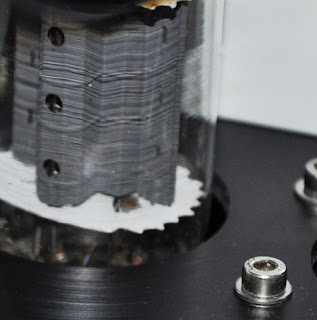 If you find this tube interesting and plan to build an amp with it, you should be aware of the dangers of the high voltage this tube requires. Only attempt to build such circuits if you have experience with high voltages. It is important to ensure proper creepage and clearance distances. Voltages over 1kV can 'jump' over small distances of air. For this reason I do not mount the sockets for the 6HS5 directly to metal plates. They are recessed below the plate. In addition I always drill the unused pins out of the socket. These are the pins 5,6, 8 and 9 which are on both sides of the plate pin 7.  Also the internal wiring of such an amp needs to be carefully isolated. Addtional insulations sleeves over all wires carrying high voltage are recommended. Keep in mind that the plate swings far above the B+ voltage coming from the PSU when the tube is driven to full power. If the necessary precautions are taken, the 6HS5 will deliver excellent performance. It is very tough and will last long even when operated at it's plate dissipation limit. The tube seems also suitable for Class A2 operation with the grid being driven into the positive region. This way it can also be used with lower plate voltages. However I have not explored this myself yet.

Stay tuned for upcoming articles around this tube!

Email ThisBlogThis!Share to TwitterShare to FacebookShare to Pinterest
Labels: 6HS5, 6HV5A, Tube of the month