This is the final article about the variable LCR EQ mono phono preamplifier with photos of the completed preamp and the impressions from the first listening. 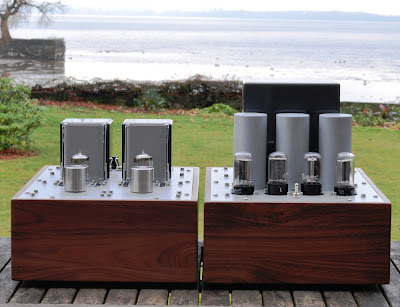 The photo above shows the preamp (left) with the external power supply (right). The two knobs are for independent adjustment of turnover and treble roll off: 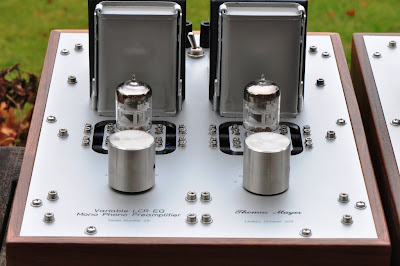 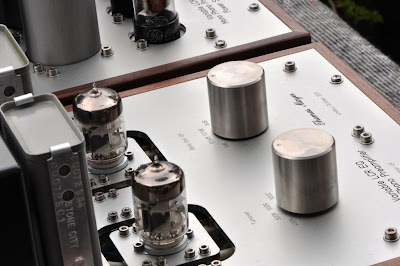 The first listening test was done with the controls set to RIAA to verify that it has the same sound quality as the stereo LCR RIAA preamp which I presented a while ago. It uses the same circuit and also the EC8020 tubes. The sound in this setting turned out to be even a bit better, most likely due to the use of the better quality nickel coils and paper in oil capacitors. 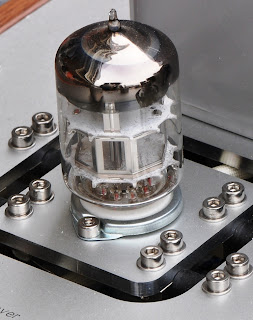 Besides the EQ network all other parts in the signal section and power supply are the same. Also the mechanical construction is very similar with the same vibration damping mechanism used for the EC8020 triodes. The photo on the left shows a close up of the subassembly which carries the tube socket. With all these details being the same the difference in sound can be attributed to the different parts quality in the EQ network itself. More interesting than the RIAA setting however were the results with discs with different EQ curves. This was quite revealing. Records which sound a bit screechy through RIAA equalisation get very listenable with the correct treble attenuation. Treble attnuation setting is the most obvious. It also brings live into records which sound dull through the wrong EQ. The differences due to turnover setting are much more subtle but also quite audible. 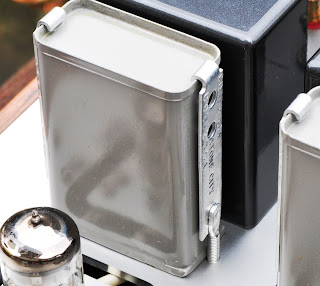 I rediscovered quite a few of the mono records from my collection which are not very listenable with the wrong EQ setting. Unfortuntaley the phonostage had to leave already to it's new home. I will build another one just like this for myself since this is a must for listening to old mono records. Since the number of possible EQ settings is limited if done with LCR networks (unless the phonostage can become much bigger) I'm also thinking about a variable EQ version of the simpler Octal preamplifier with a wider variety of settings. 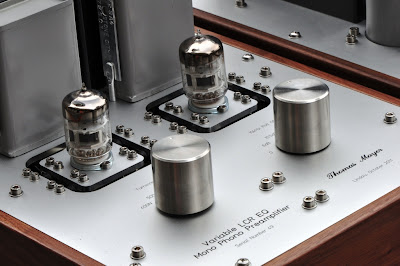