This months tube is a type with compactron base. Again a tube which is widely ignored by audio people and available for very low cost. A true dumpster diver's dream: The 6U10. 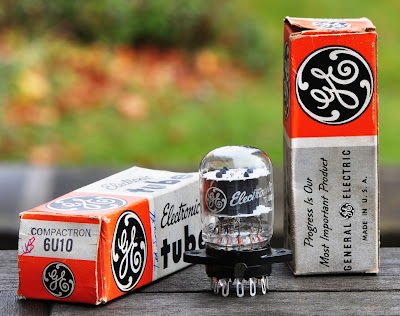 I already wrote a bit about the background of the compactron series of tubes in the articles about the 6HS5 and the 6CG3. So I'm not going into more details about this again. You can read some more information about the compactrons in general in these articles. 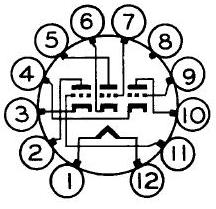 The 6U10 makes use of the many pins of the compactron base and integrates 3 triodes in one envelope. All cathodes, grids and plates sare brought out to separate pins. All three systems have a common heater. This still leaves one pin unconnected. Two of the triodes, system 1 and system 3 have the same parameters: a medium amplification factor of 17.5 and a plate resistance of 7700 Ohms. System nr. 2 is a high mu triode. It has an amplification factor of 98 and a plate resistance of 61000 Ohms. All details can be found in the datasheet. The two medium mu triodes are comparable to the systems of a 6SN7. The amplification factor is a bit lower and the plate resistance slightly higher. The high mu triode is comparable to half of a 12AX7 (ECC83). 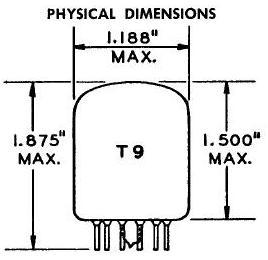 This makes the 6U10 a very interesting tube for audio purposes. The integration of three separate triodes into such a small bottle could enable very compact amps or preamps. The glass envelope is less than 4cm high. Compared to the common Noval based tubes the diameter is relatively big at about 3cm. Most important for the usability in audio are the parameters of course and especially the linearity of the plate curves. While it is not quite as linear as for example the 6SN7 or 12AX7, the plate curves still look quite good, especially if you pick a good operating point and a linear region. The picture below shows the curves of systems 1 and 3 on the left and the high mu system 2 on the right:

These compare very well to actual plate curves taken from a tube with a curve tracer:

This looks pretty good! Also the sample to sample consistency is quite good. The systems 1 and 3 within an envelope also match quite well. The traced curves on the next photo are picked from a random tube. The plate curves of system 1 are drawn with a solid line and system 3 with a dotted line. They match very well. 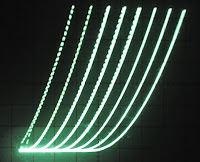 Now that we have examined the technical qualities of this tube, what could it be used for? How about a preamplifier with phono section with just a single tube per channel? The high mu section could be used for initial amplification of the small signal from the cartridge. Section 1 for the second stage for further amplification and section 3 for the output stage. Here is a schematic of such a preamp:

As drawn it is just a phonostage with enough gain to use it with a MC cartridge without step up transformer. Gain is about 55dB. Don't expect super low noise performance out of this. For lower noise operation use it with a MM or with MC step up transformer. In such an application a volume pot and input selector could be added in front of the third stage and it becomes a full function preamp. Here is a photo of the circuit in an experimental prototype: 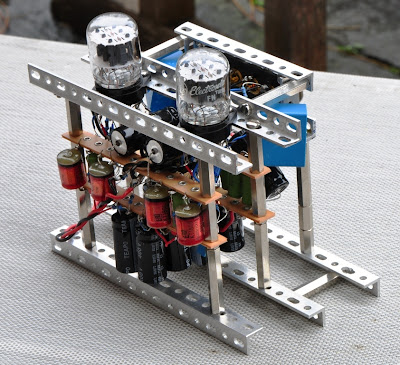 It tested quite well, especially when considering the cost of the parts. If you want to build this circuit, please keep in mind that the EQ networks should be checked and trimmed in circuit. Gain can be changed a bit by using cathode bypass caps. I only used one in the last stage to keep output impedance low.
Now some more potos of the tube itself. This is a close up showing the base of the tube: 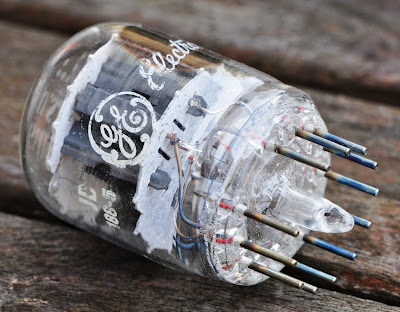 Here the three systems can be seen: 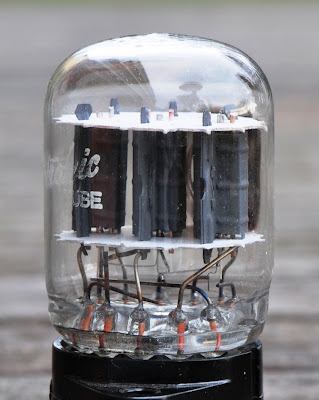 And finally a series of photos with the tube lit: 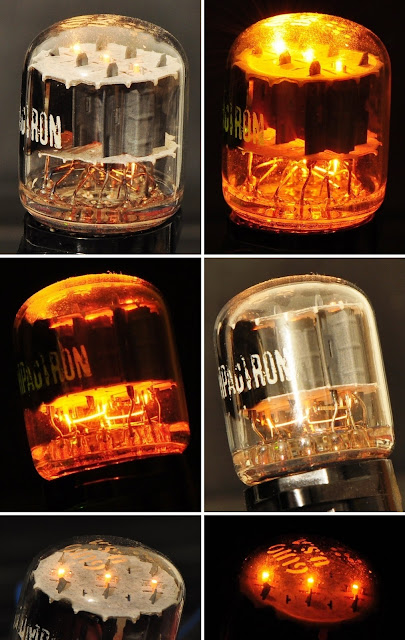 I hope you enjoyed this last tube of the month article for this year.
Best regards
Thomas
Posted by VinylSavor at 12:03

Email ThisBlogThis!Share to TwitterShare to FacebookShare to Pinterest
Labels: 6U10, Preamplifier, Tube of the month