As already mentioned in previous posts, several single ended 211 amplifiers are planned. The first one is a variation of an amplifier which I already built several years ago, but with some improvements. It will use ELROG ER211 output tubes and a 801A as driver. So it will be an all-DHT amplifier with throated tungsten filament triodes throughout. This first post shows the planning of the layout. 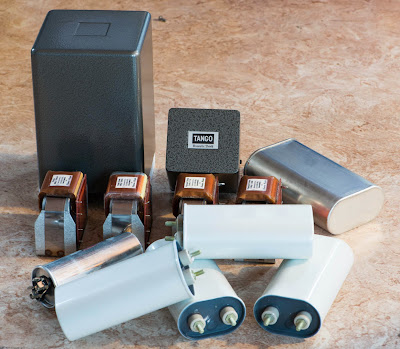 Tango X10S output transformers and NC20 interstage transformers will be used. Oil capacitors throughout and extensive passive filtering of all voltages with chokes, including the filaments.  Due to the size and amount of components this dictates splitting up into mono blocks with separate power supplies. So 4 chassis in total. I would have preferred to even use separate PSU chassis for plate supply and filament supply. But the person who requested the amp insisted on only 4 chassis. The photo above shows the main components which have to fit to the amplifier chassis.

I like to place the components which should go onto the top of the chassis on the floor and move them around until a good layout emerges: 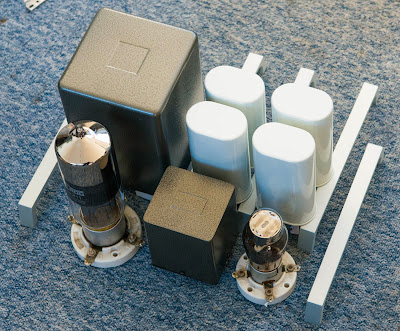 Besides the tubes themselves, the Tango transformers should not be hidden and shown on the top plate. I have some of the oil caps varnished in a beautiful metallic effect white, so they go on top as well. 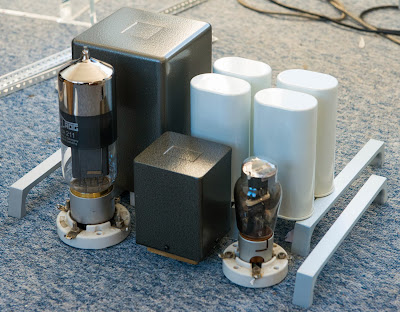 This leaves the 4 chokes and two more capacitors which will be placed inside the chassis. Each tube gets a separate B+ and filament smoothing choke. Once the placement of components has been decided upon, the layout for the metal plate can be done: 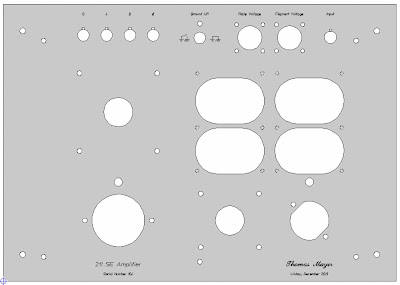 The power supply will be a bit more difficult since it uses more heavy components: 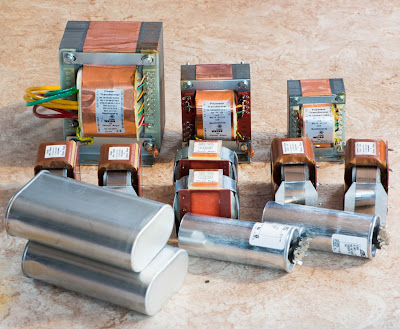 Three power transformers. My newly developed mains transformer for 211 or 845 amps and separate filament transformers for the 211 and 801A. These have been described in a post about my new mains transformers. In addition 4 B+ chokes, 2 each for the 211 and 801A plate supplies and 2 filament chokes, one for each tube. In addition some smoothing caps. These are only the big components. There is some more stuff like Schottky diodes ans caps for the filament supplies as well as some resistors. And of course the rectifier tubes.

Arranging everything such that it fits into the anticipated chassis size was difficult. Finally the decision was made to place all power transformers on top along with the rectifier tubes: 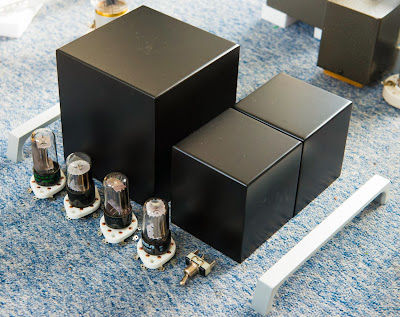 Separate covers for each transformer. The transformer covers are described in a previous post here.

The rectifiers placed in the front so that they are well visible. The arrangement of the covers leaves some room behind the high voltage transformer for the connectors: 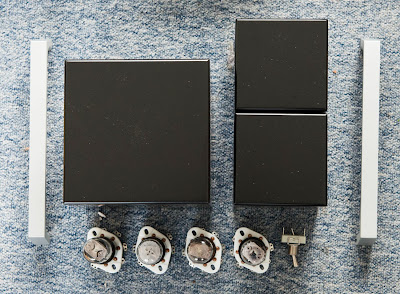 The layout of the metal plate for the power supply: 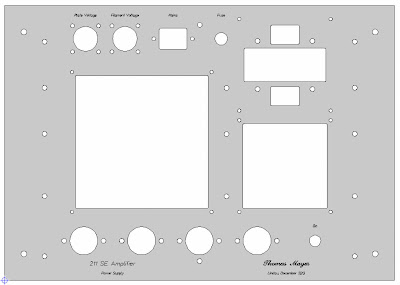 The assembly steps will be shown next. Stay tuned!

Thomas
Posted by VinylSavor at 12:28

Email ThisBlogThis!Share to TwitterShare to FacebookShare to Pinterest
Labels: 211, 801A, Single Ended Amplifier