The 211 / VT4C was already covered extensively in the Tube of the Month of July last year. Judging by the clicks that post received and still receives, it is by far the most popular post of the Tube of the Month series. Therefore this tube deserves a revisit, especially since there is now a newly manufactured 211 of at least equal quality as the NOS tubes. The ELROG ER211. 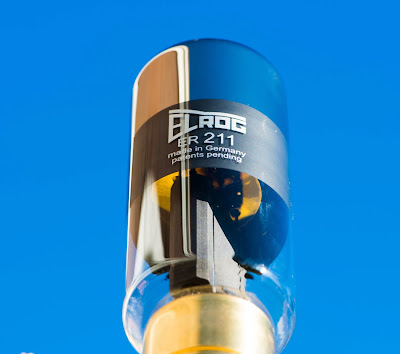 For information about the company Elrog, please read my visit report. Since my visit there I became affiliated with the company and I am selling their products. I also have some 211 amplifiers in the making which will use this tube. I already wrote a report about the sound of these tubes here and also posted some user feedback here.

There are some reports floating around on the net about reliability issues with Elrog tubes. These had occurred with early prototypes which have been handed to a few companies. Some of these early prototypes leaked out onto the market and are occasionally being offered. These early tubes can be identified by their slimmer glass which has about the same diameter as the base. This caused some thermal issues. It also took a while to get the degassing process under control. These prototypes have never been intended to be given into end users hands.

These early problems have been fully resolved and the tubes are in stable production in their final version since earlier this year. You can easily spot a legit Elrog tube by the glass which is bulging over the base: 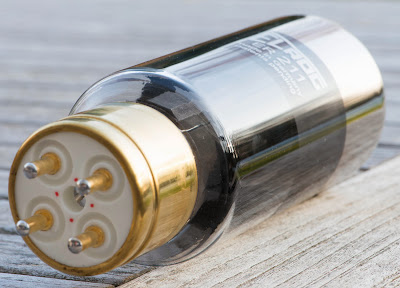 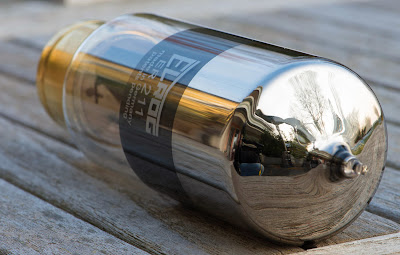 Besides the standard version the tubes are now also available with silver wiring in the base. These are identified by the red dot between the pins: 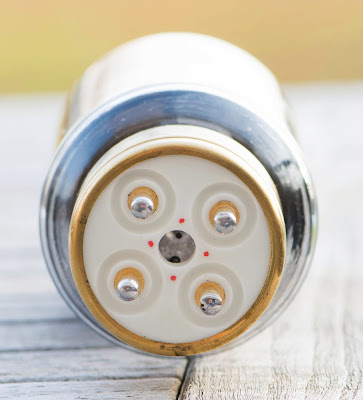 Each tube carries a unique serial number which is embossed on a small metal plate inside the glass: 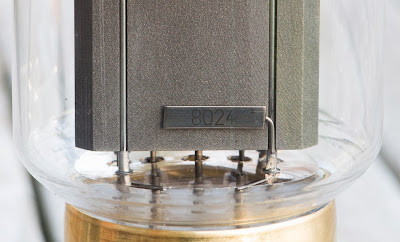 Since I don't have a dud tube of this type for dissecting, Dr. Schaffernicht of Elrog was so kind to send some parts to show how the tube is constructed.

The glass enclosures are cut farm raw tubes and as initial step one end is formed like this: 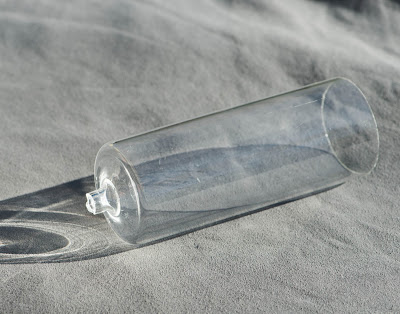 This is the assembly of filament and grid: 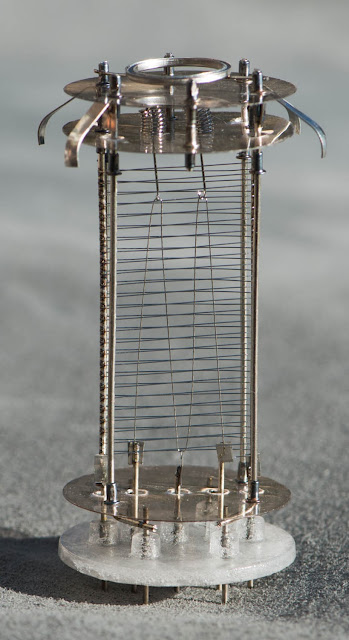 A close up of the bottom part: 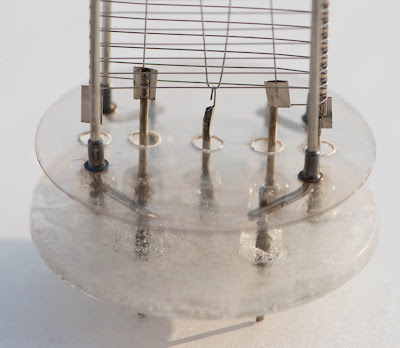 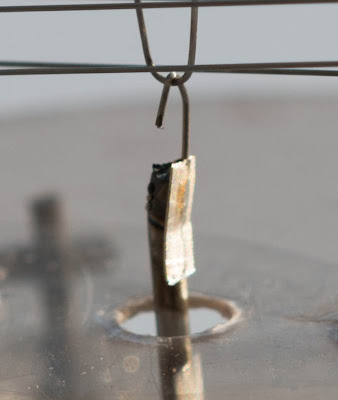 Connection of the outer ends of the filament: 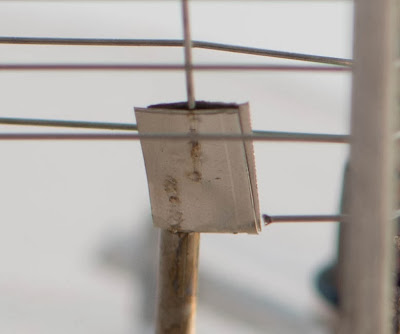 Welding of an electrode to the pin which goes through the glass bottom: 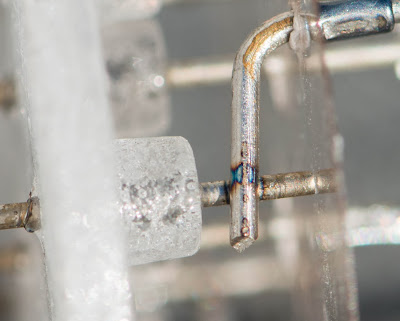 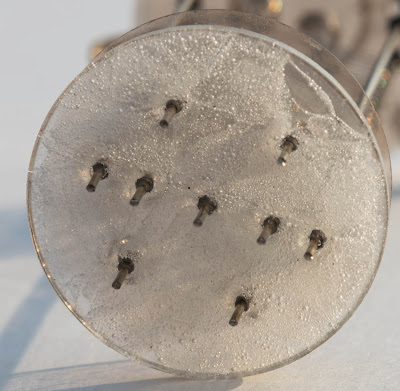 A close up of the filament: 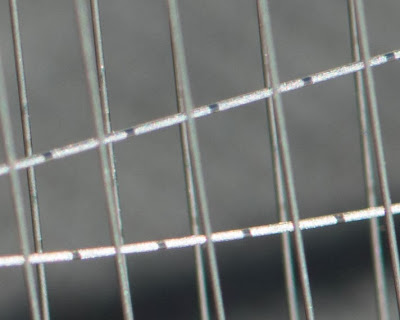 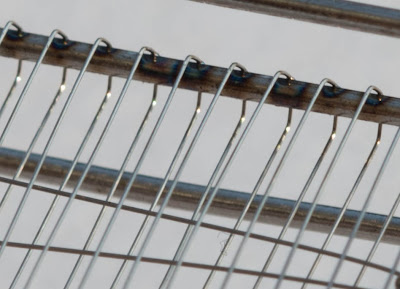 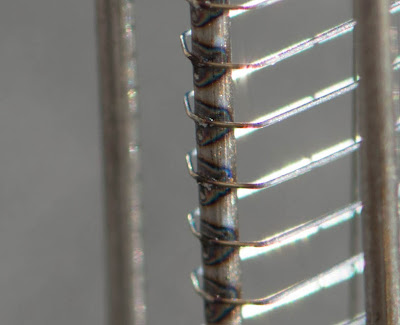 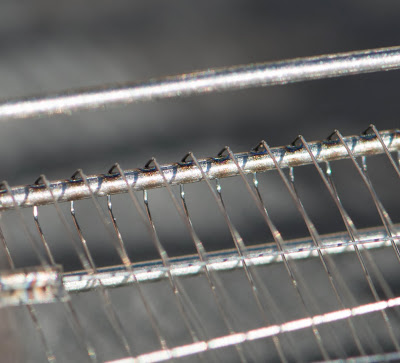 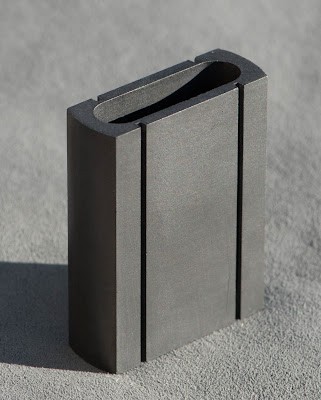 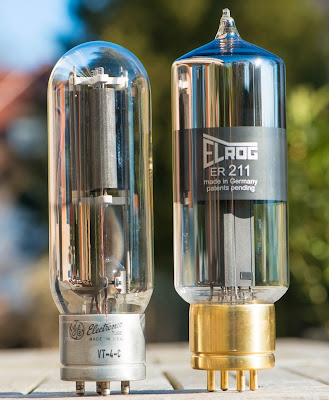 Close up showing the bases and details of internal construction: 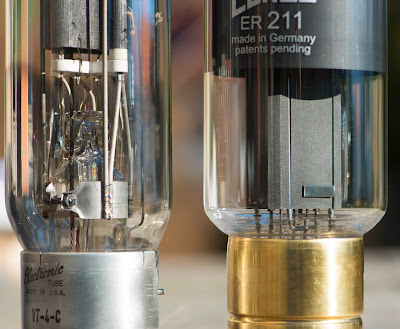 In the Elrog tube the electrode is mounted close to the base while it is closer to the top in the GE. This results in different heat distribution. The Elrog gets hotter at the base. But a well constructed amplifier is able to cope with this heat distribution. 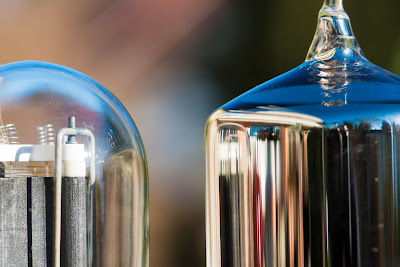 Clearly the Elrog is not a mere copy of the General Electric but a complete new development of it's own. Which it also shows through it's exceptional sound quality.

Several amplifiers which will use these tubes are in the making. Both with directly heated driver stages. One of them using a 801A as driver and the other will use a ER211 as driver. Stay tuned for updates about these amps. 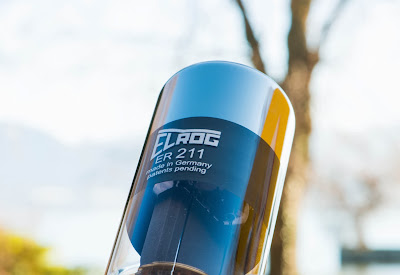 Until end of this year, readers of my blog can get the tubes at a special year's end price. Contact me to get a quote. My contact details can be found under the link Impressum / Contact at the top left of this site.

Email ThisBlogThis!Share to TwitterShare to FacebookShare to Pinterest
Labels: 211, Tube of the month