So far 38 different tubes have been presented in the Tube of the Month series. 4 types have been revisited for a total of 42 posts. I like to show tubes outside of the usual mainstream. Tubes widely ignored by amplifier designers yet very suitable for audio applications. While I was contemplating about which tube to pick for this month, I thought why not something very unusual. A tube type which probably many never have seen or even heard about. When rummaging through my tube stock I came across some acorn types and thought these are definitely worth writing about. There are about a dozen different acorn tubes. Among those some interesting triodes, like the 955. But while we are at strange tubes, lets pick a directly heated one. There are two interesting DHTs among the acorns, the 957 and 958A. I chose the latter one for this post. Here is the 958A. 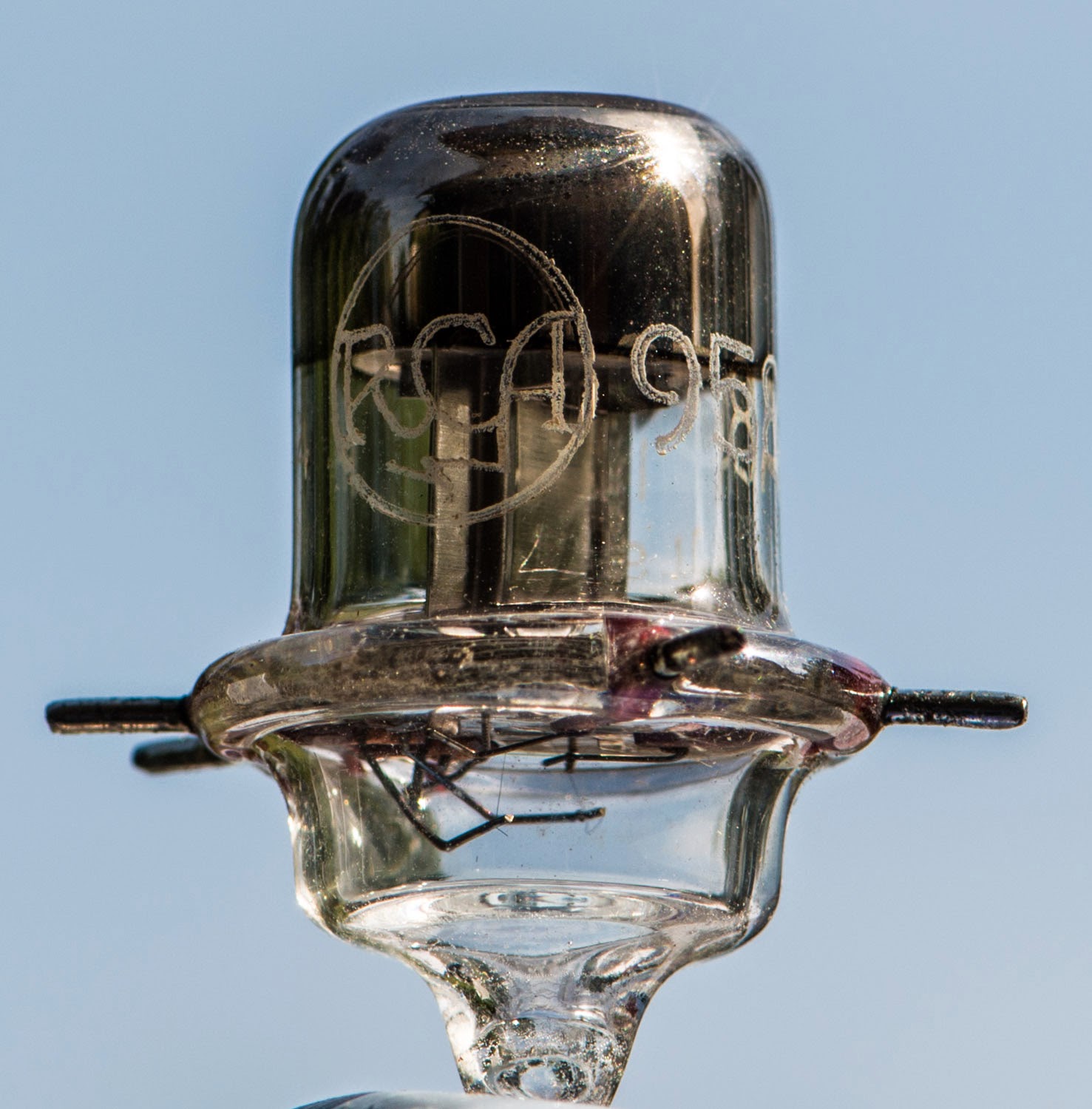 Acorn tubes got their name from their small size and shape which resembles that of the acorn. These tubes got introduced in the middle of the 1930ies and were already obsolete about decade later, superseded by miniature type tubes. 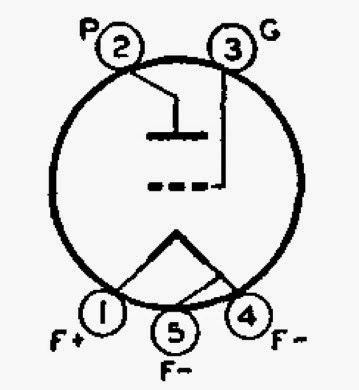 Acorn tubes were developed for high frequency applications. The usable frequency range of a tube is limited by several factors. Among them the size of the electrode elements and their connections which determines inductances and capacitances. Acorns had an extremely small size and the connections were brought out at the side of the glass for very short signal paths and extremely low inductances and capacitances. Some of them also had connections coming out of the top and bottom of the glass. The pinout on the left shows  plate and grid are coming out of the glass on one side, the filament connections on the other. The negative end of the filament is connected to two separate pins. One for connecting to the filament supply and the other to serve as cathode connection. 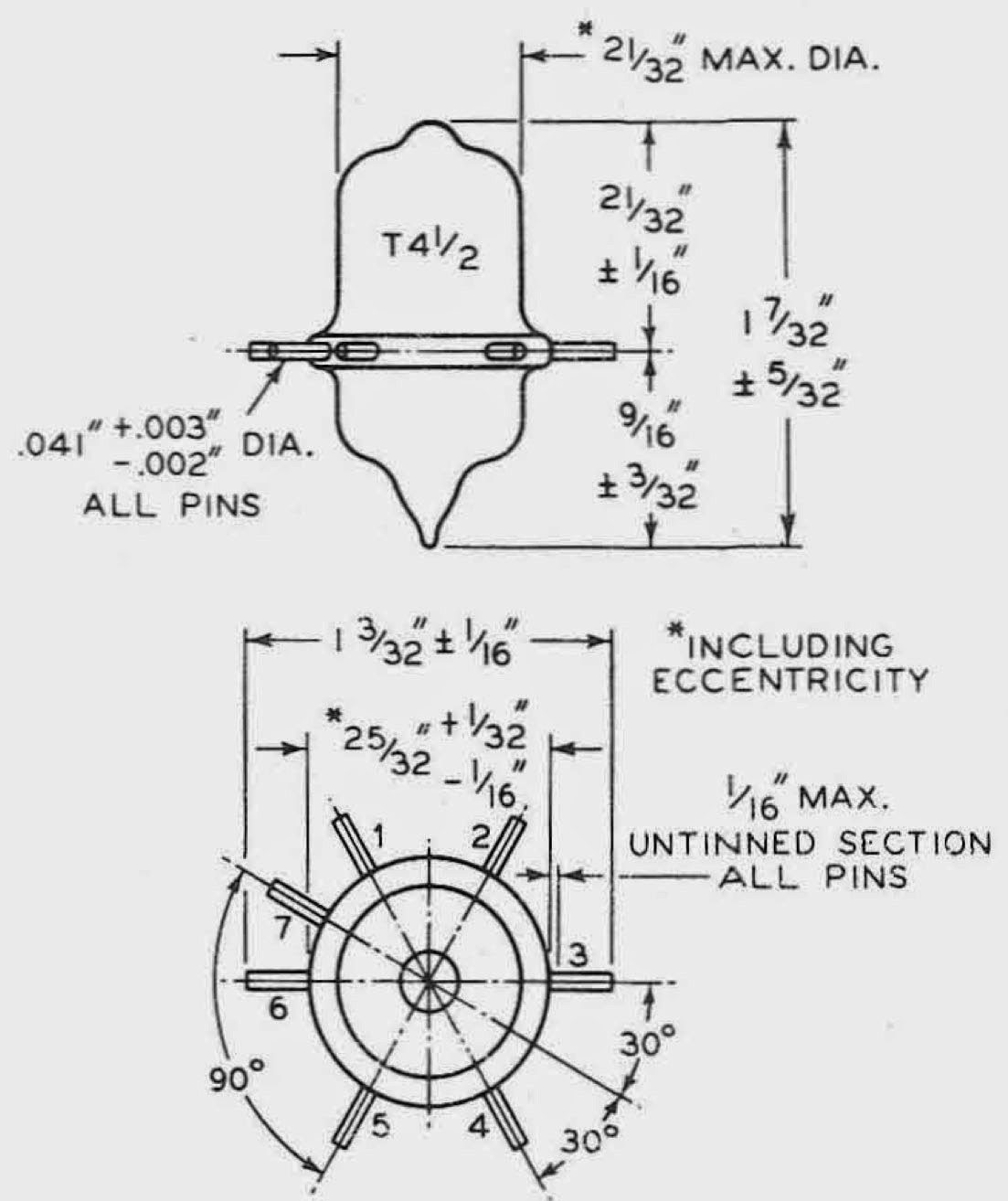 The way the pins are brought out is probably the reason why the acorn type disappeared very quickly. By inserting the tube into it's socket, force is applied to the pins like to a lever, this could easily lead to breaking of the glass. Tubes with their pins coming out at the bottom are much less critical in this regard. But if handled with care this should not be an issue in audio applications. The drawings on the right show the tiny size of these tubes. The data sheet of the 958-A also shows the typical values for the use as audio frequency amplifier. With an amplification factor of 12 combined with a plate resistance of 10kOhm this tube could serve in a line preamplifier or as input tube of a 3 stage power amplifier. Filament voltage is only 1.25V and filament current is a very low 100mA which opens up some interesting possibilities. More about that later, lets first have a look at the plate curves: 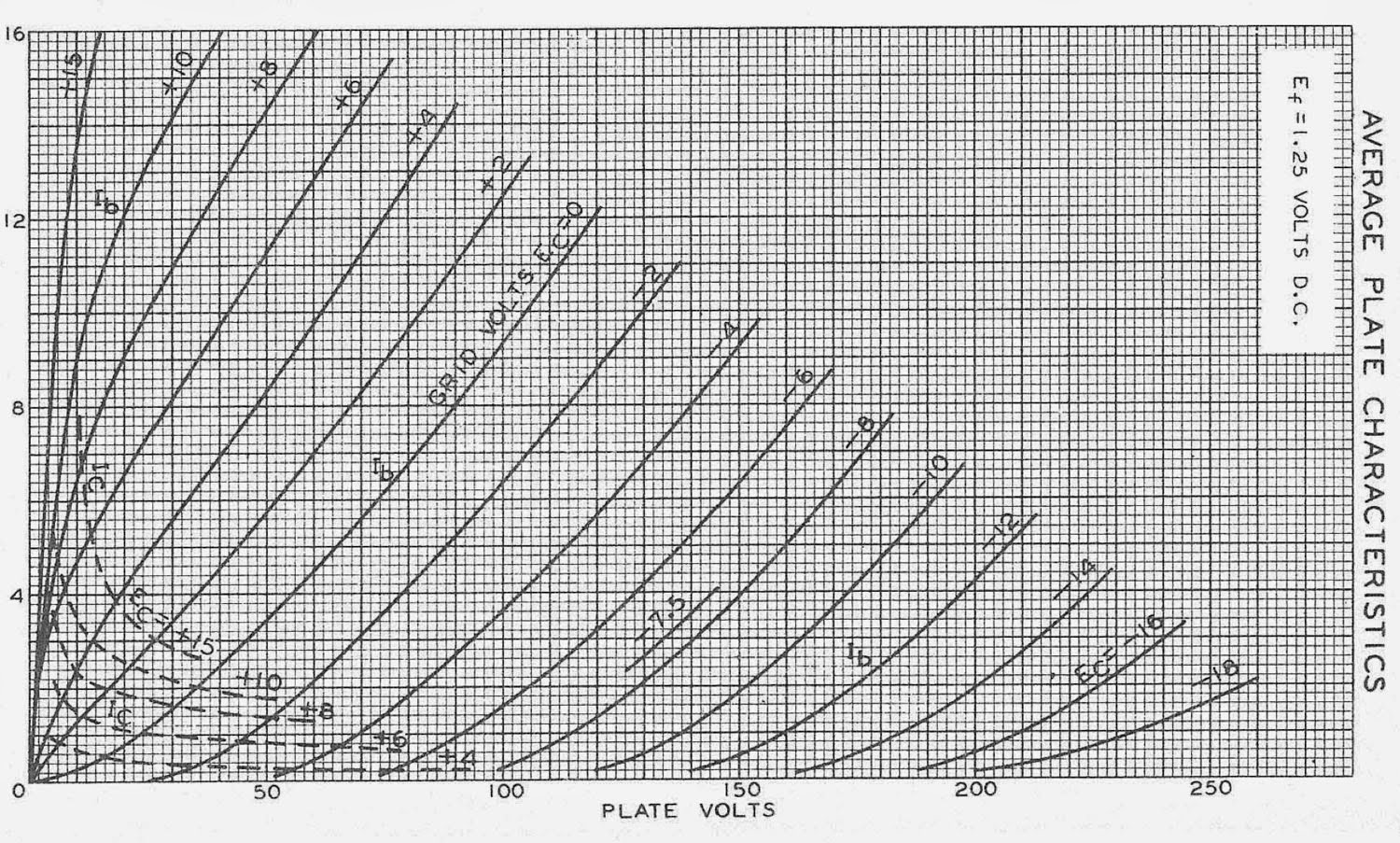 These look quite promising, let's see how an actual tube looks on the curve tracer: 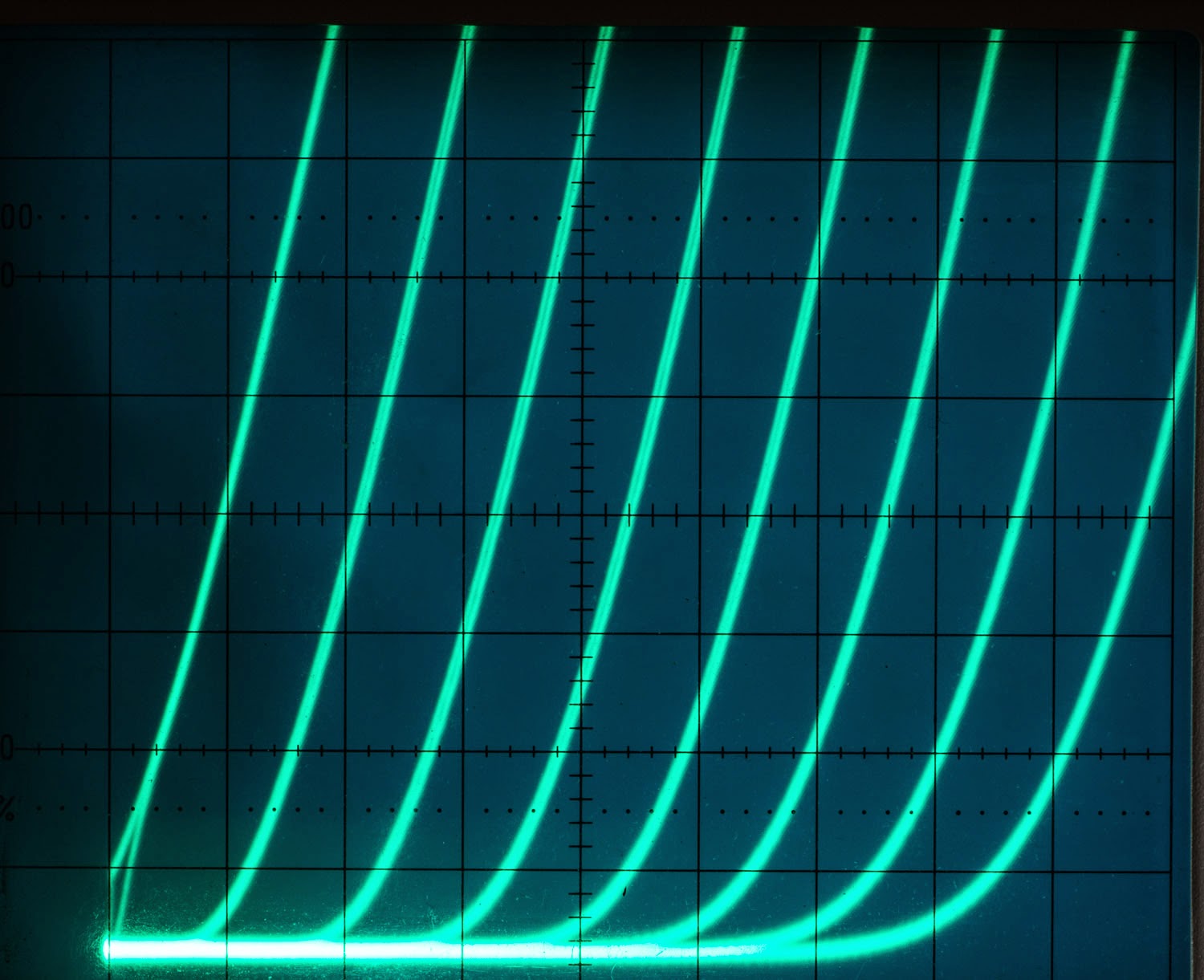 That's even better looking than the data sheet curves and promises excellent linearity.

Although acorn tubes have only been produced over a short period they can still be easily found at low prices. Here some made by RCA: 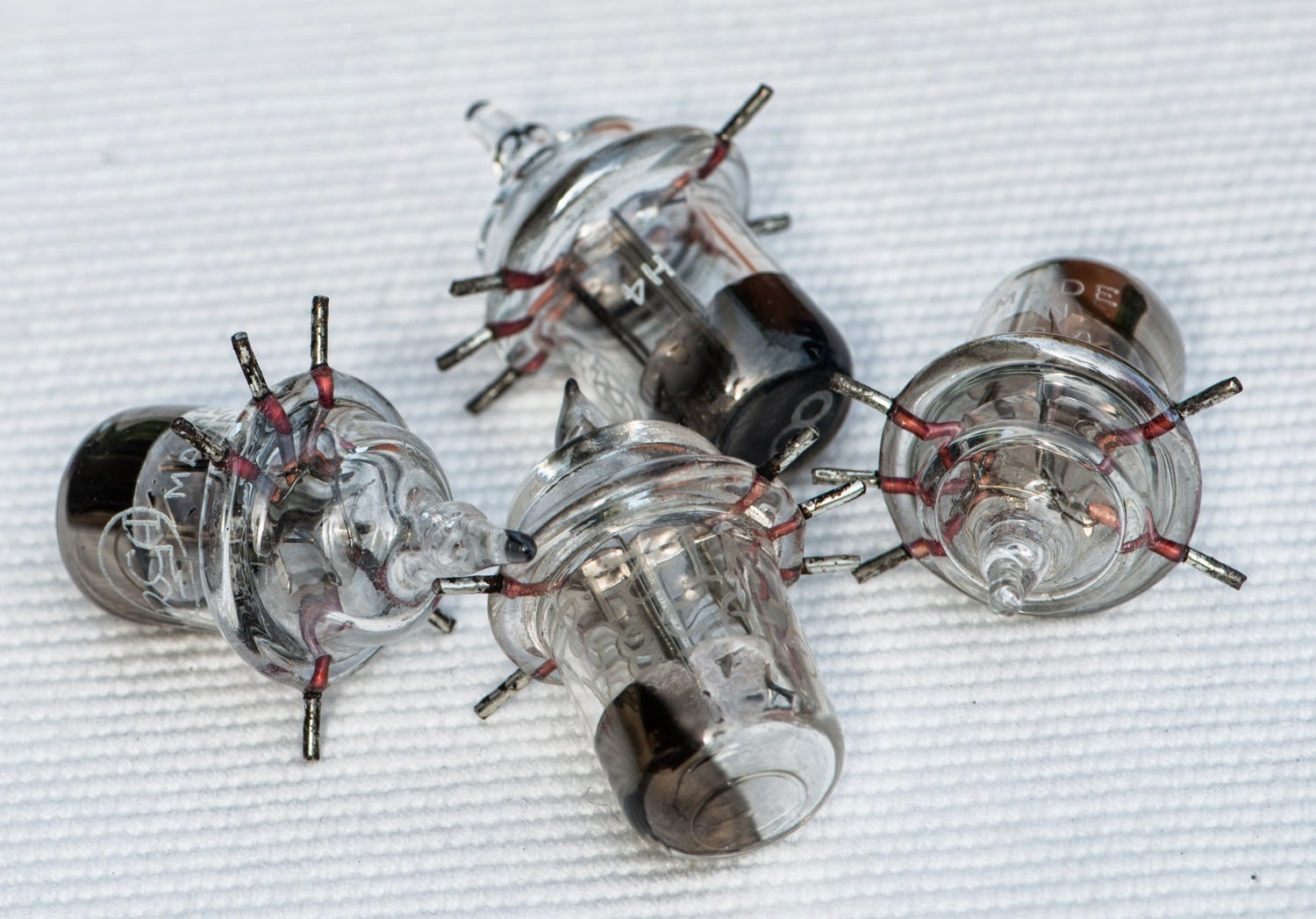 They came in beautiful small boxes with the RCA 'meatball' logo: 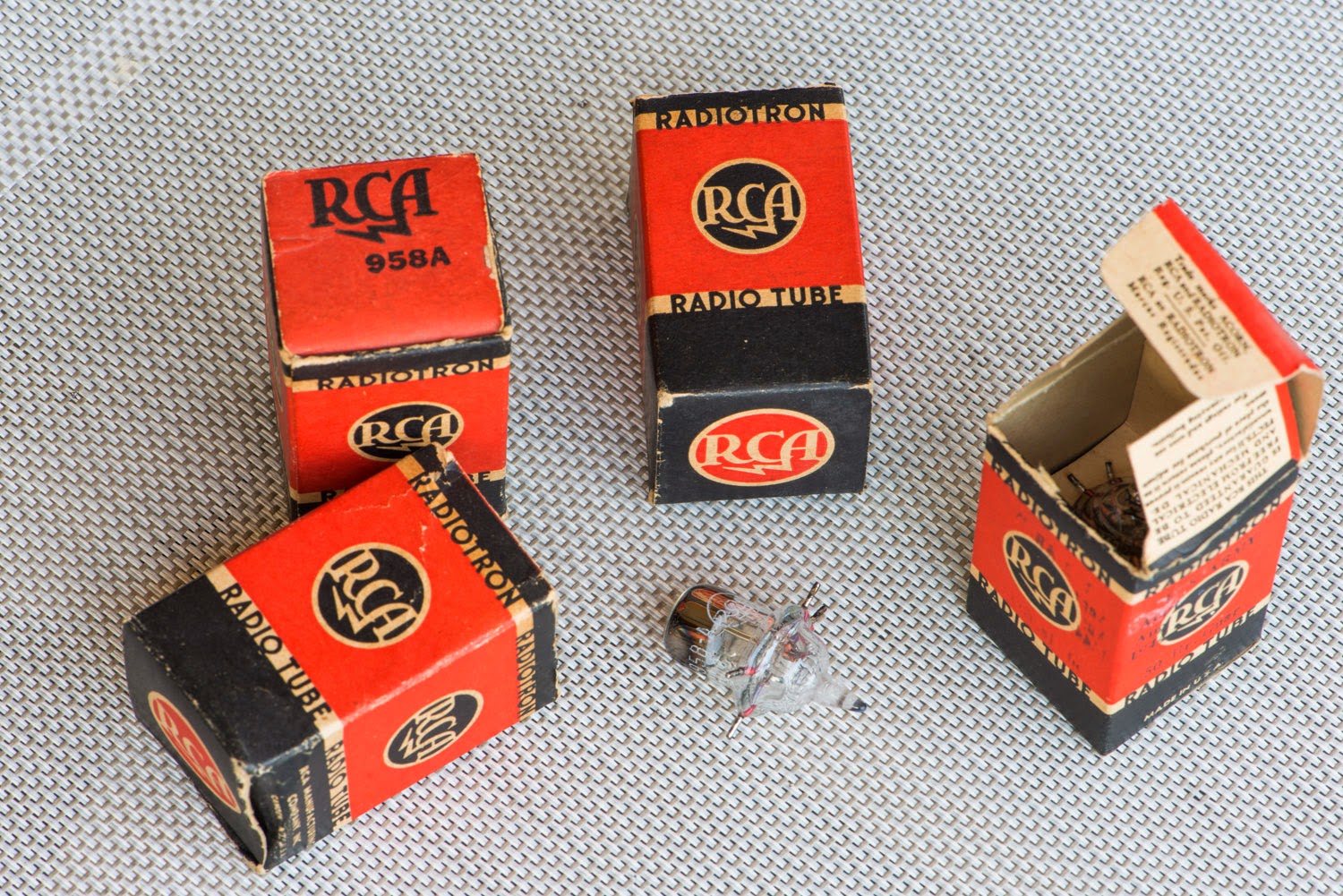 The tubes are held in place with an internal piece of cardboard: 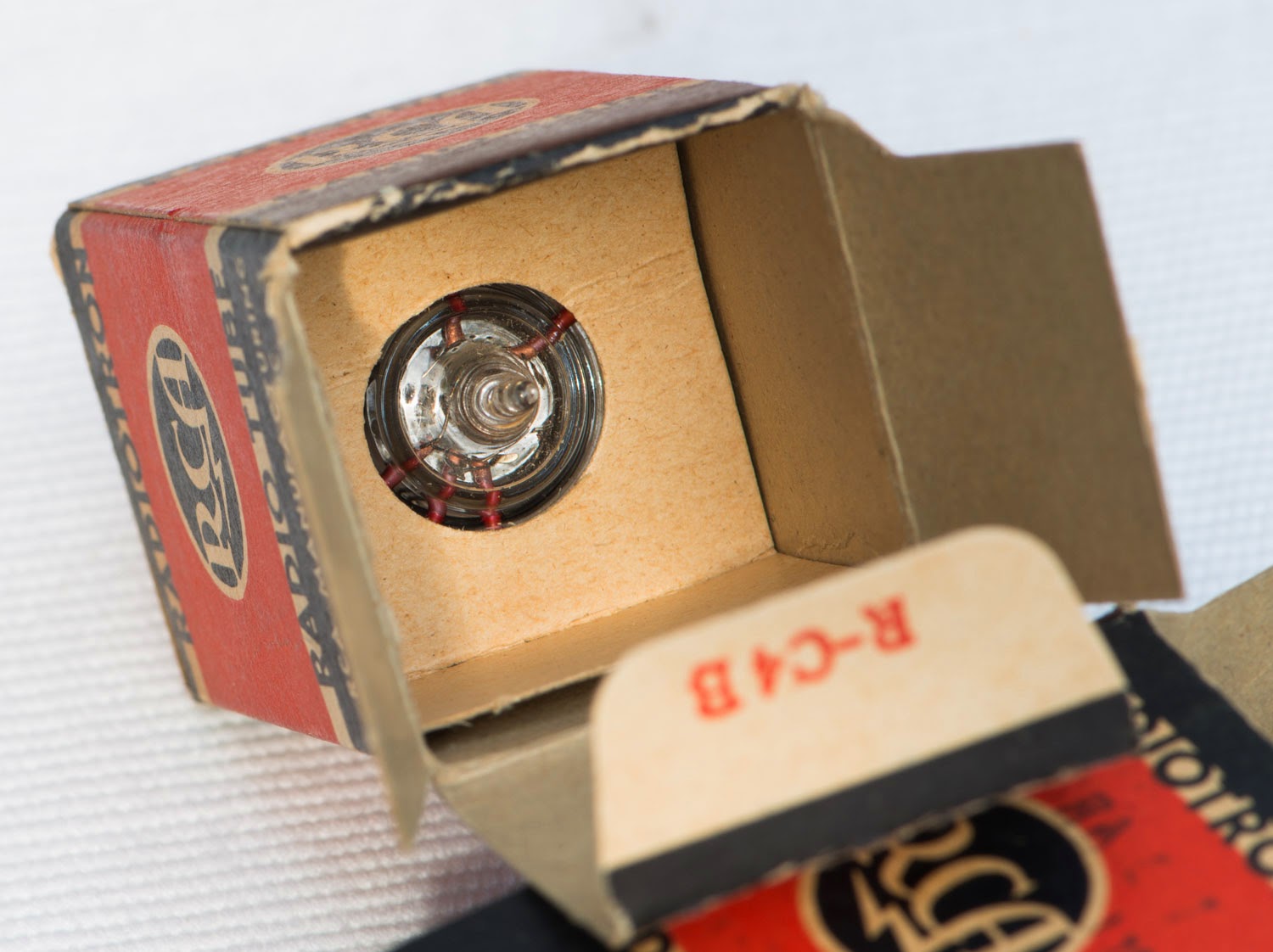 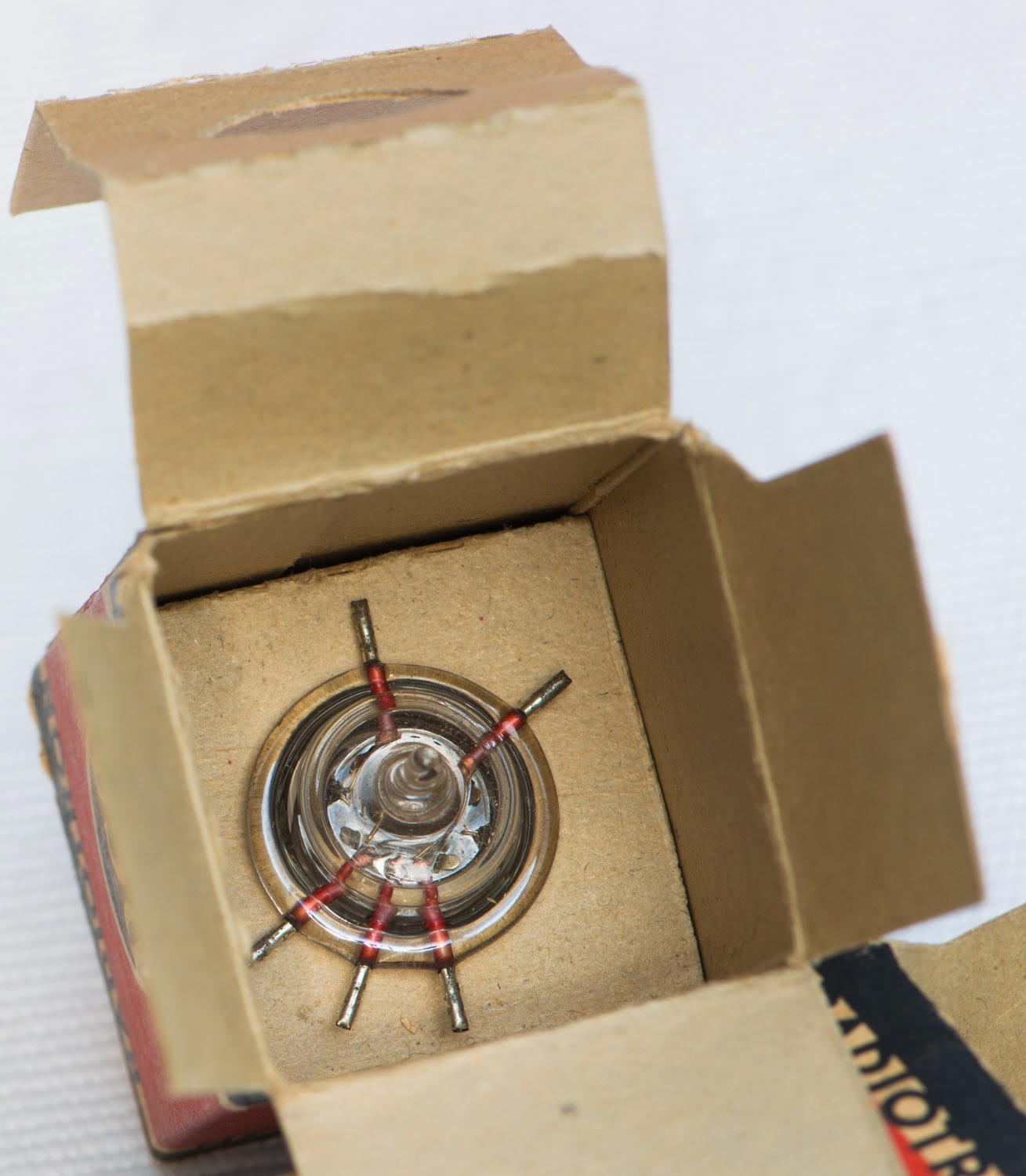 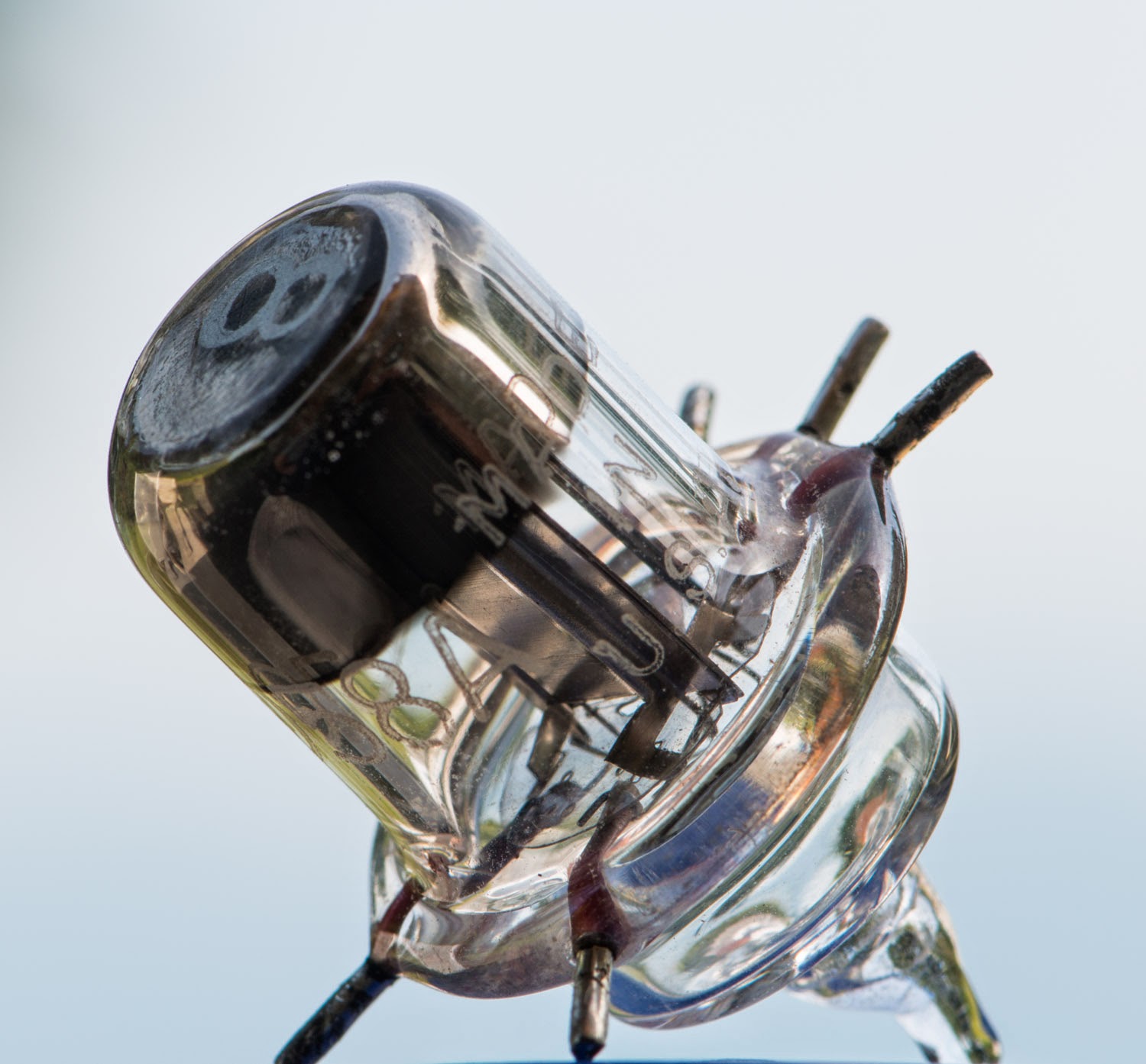 The exhaust tip at the bottom: 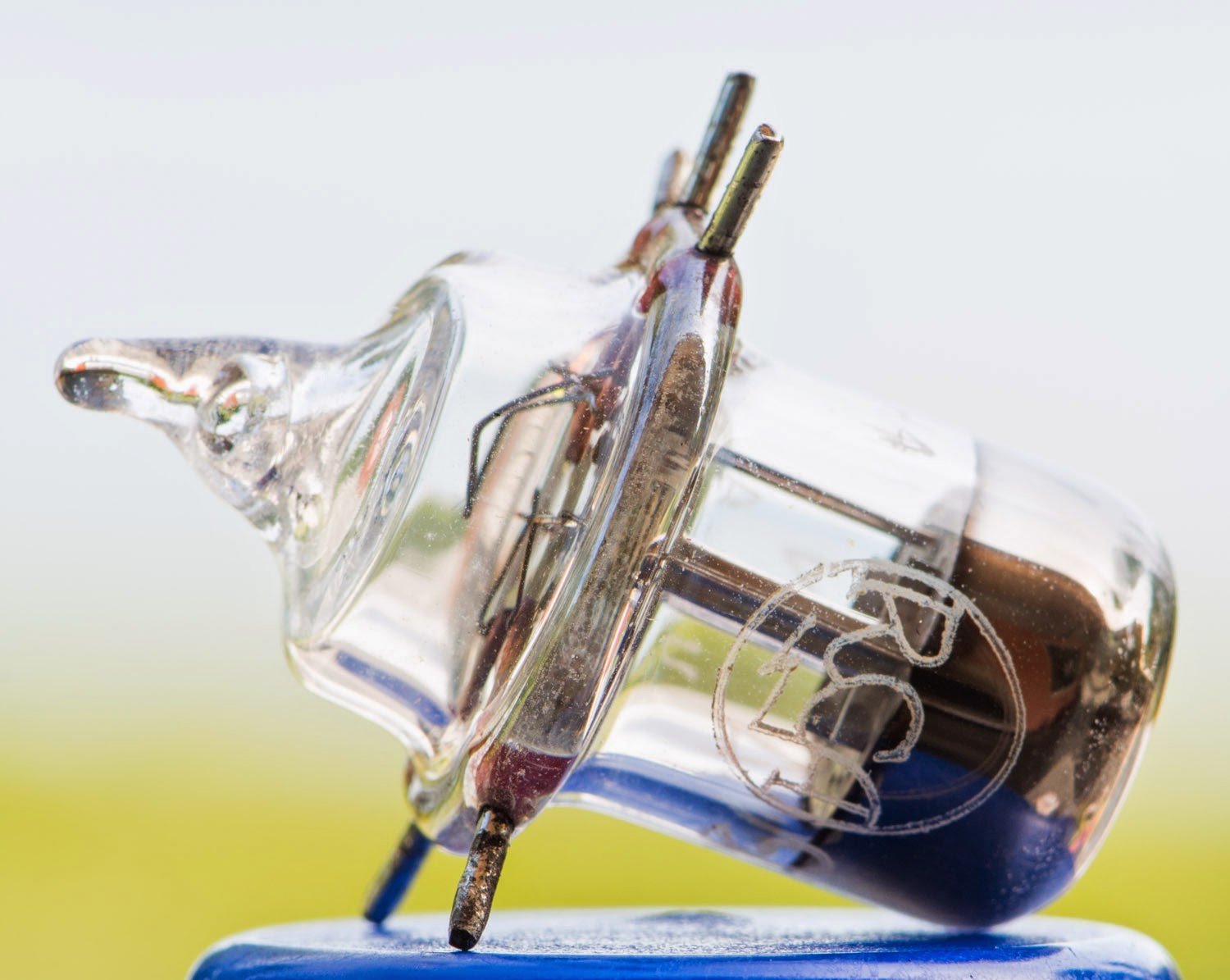 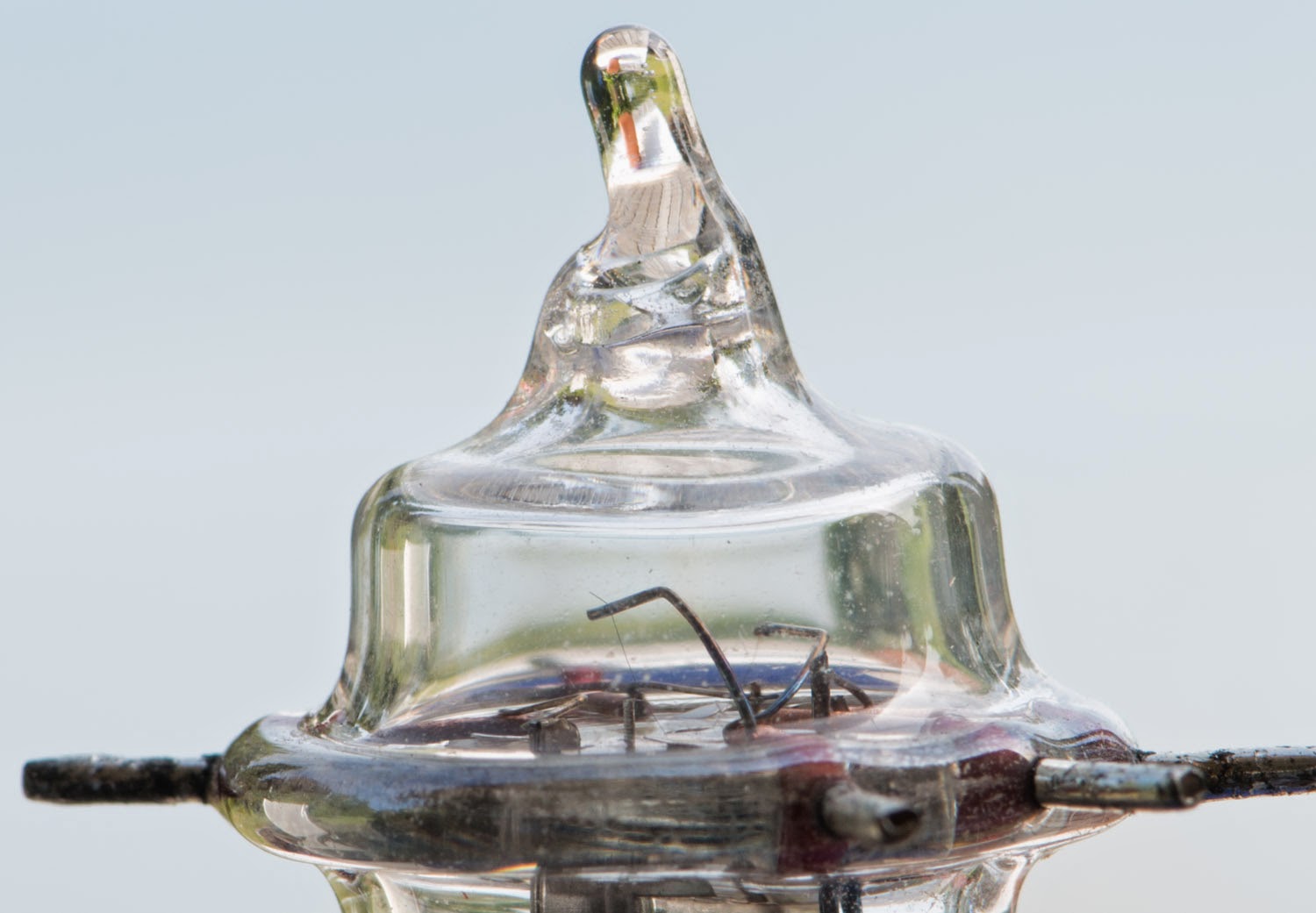 A 958A without manufacturer marking: 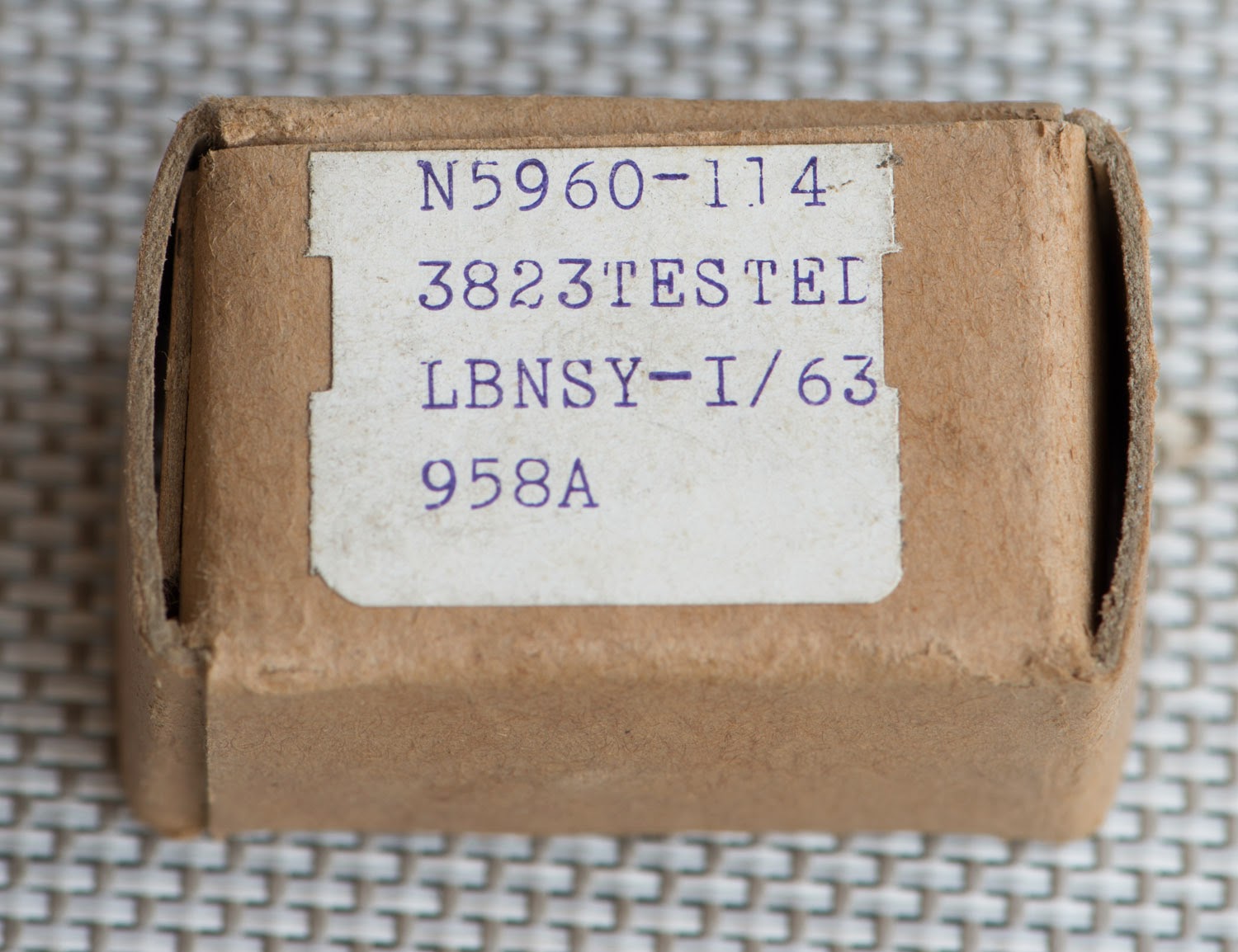 The packaging is less fancy than the RCA: 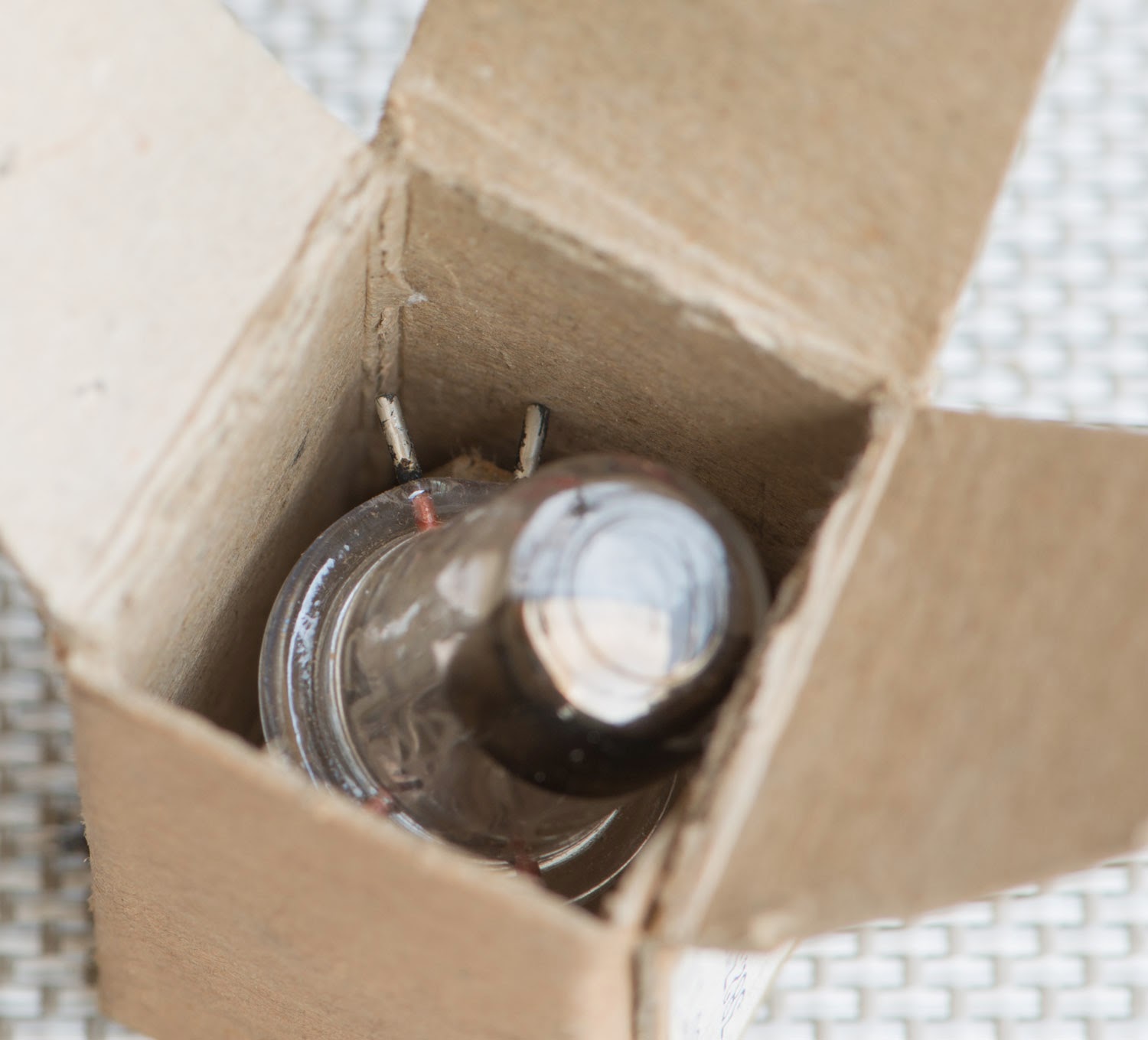 Probably from ex-military stock since the tube has the military designation VT-212. 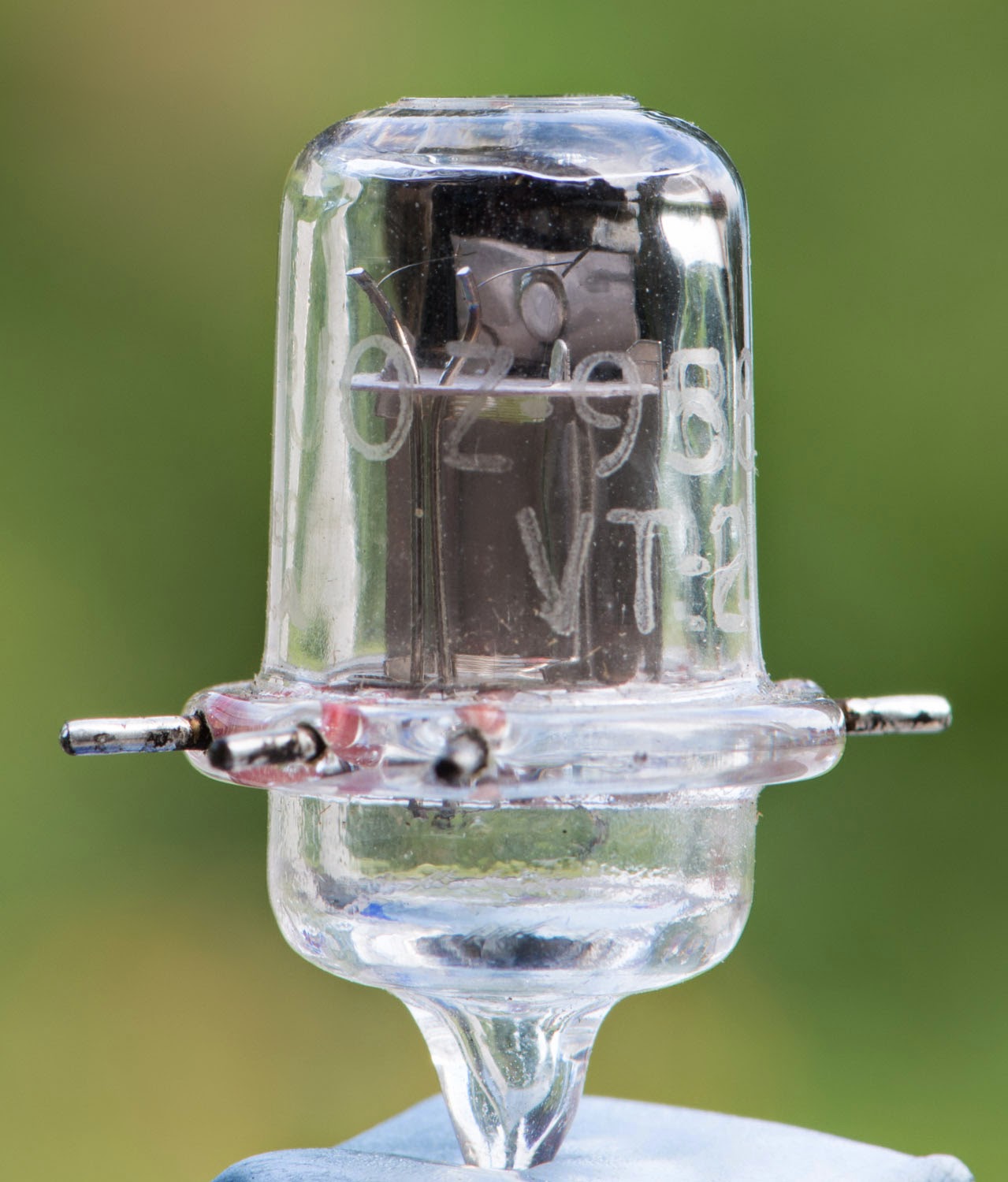 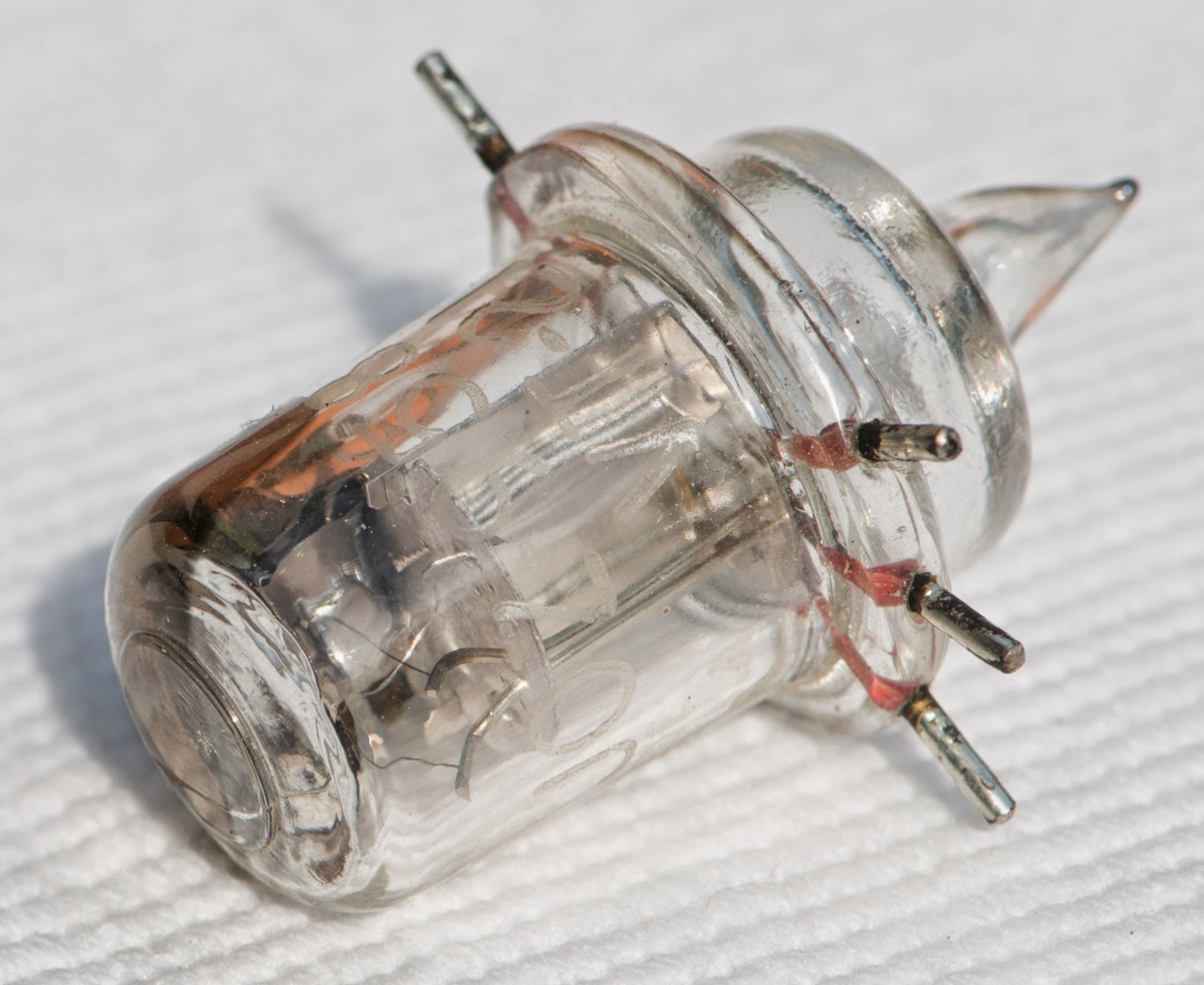 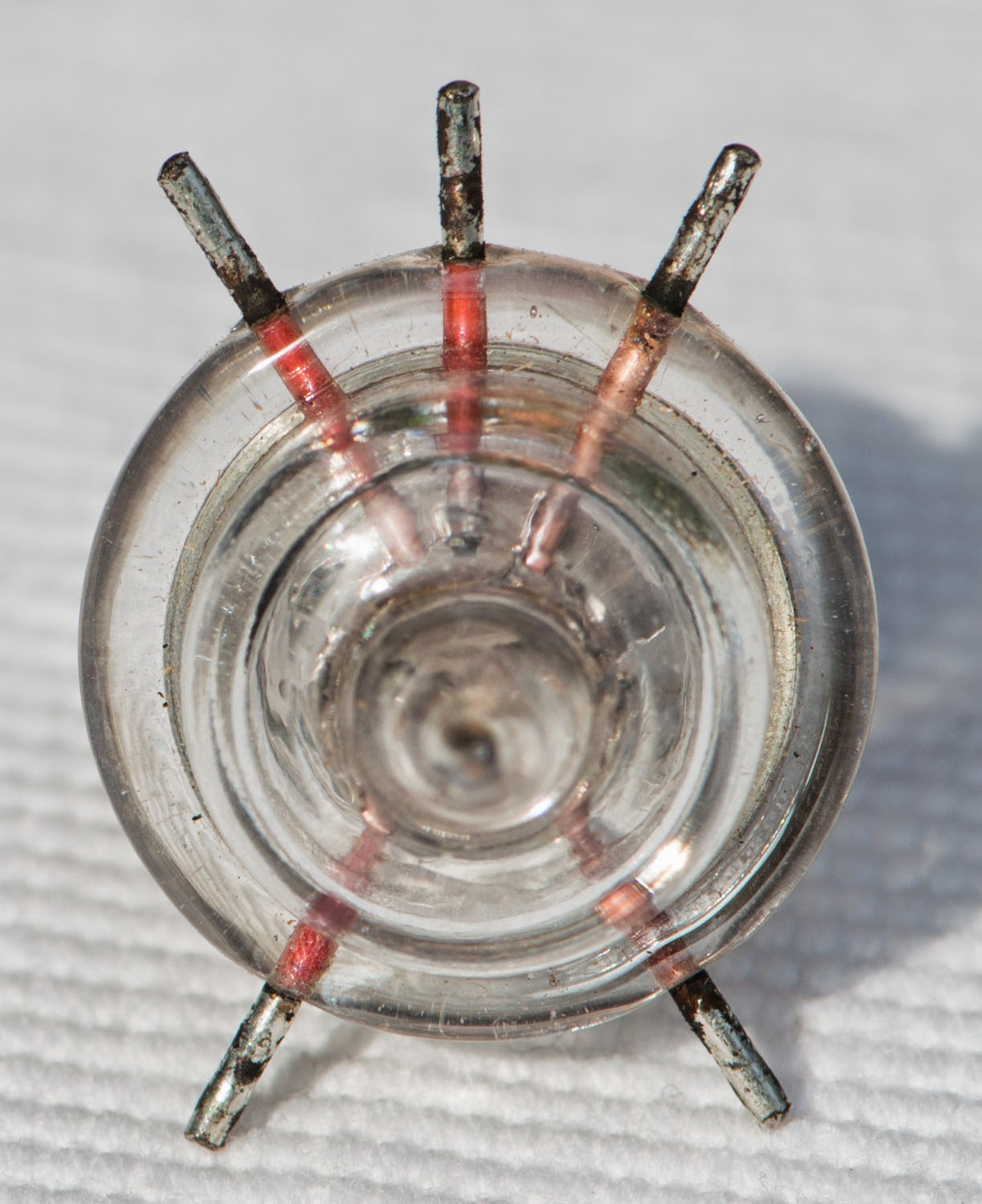 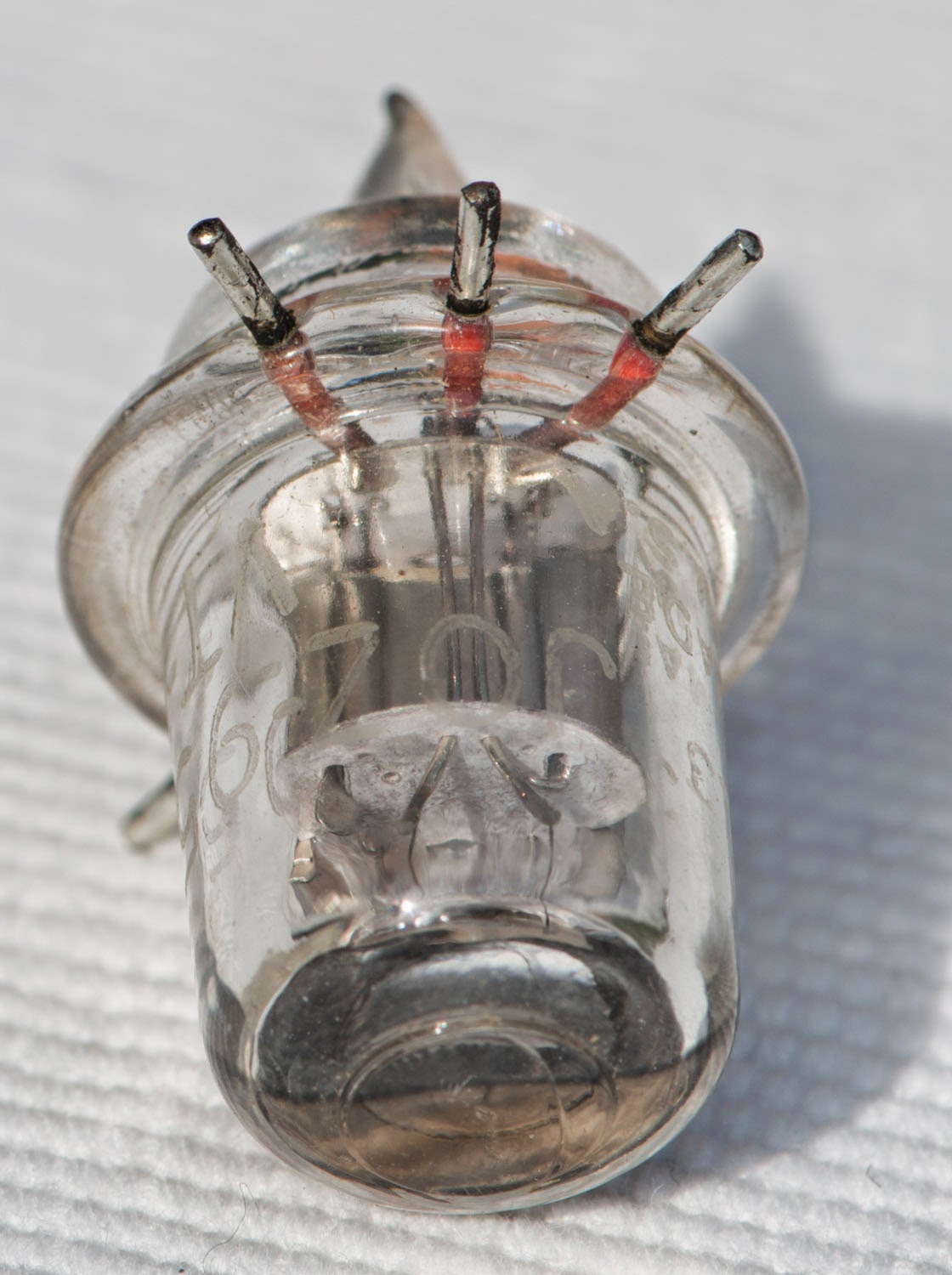 An acorn tube in comparison to a 6SN7: 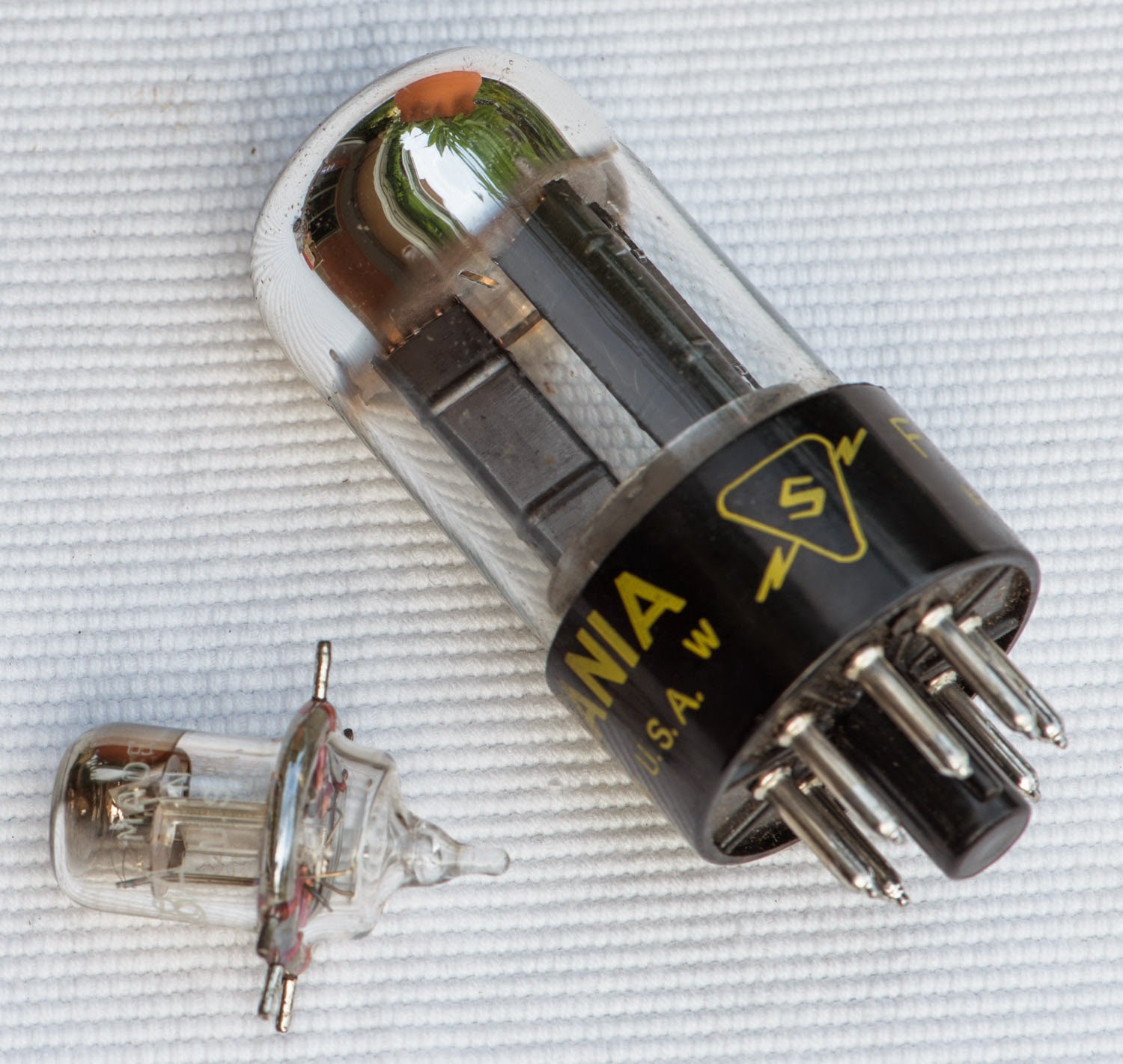 While the tubes are still easy to find, the sockets are a different matter. If you find them they will most likely be quite oxidised. 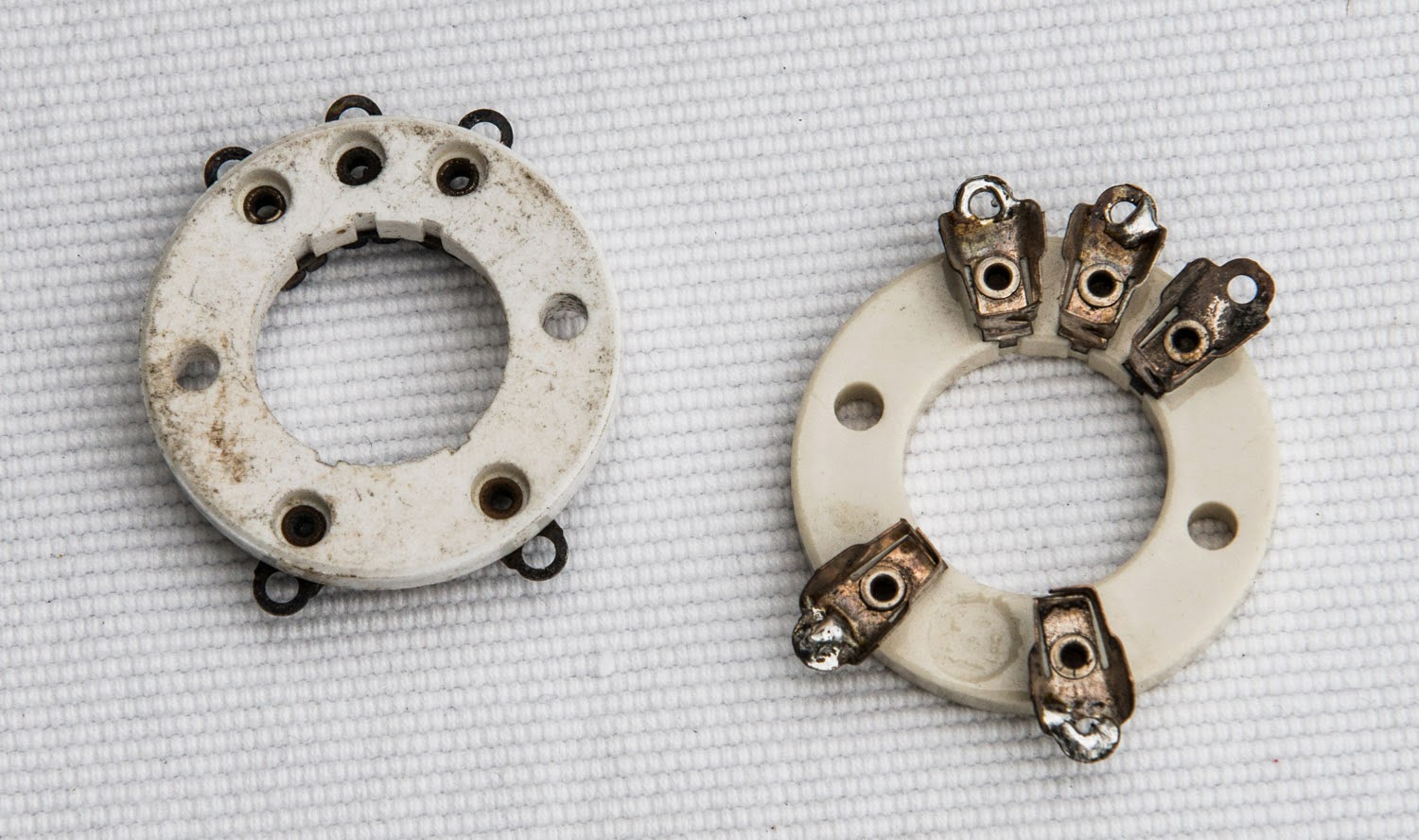 A tube placed in the socket: 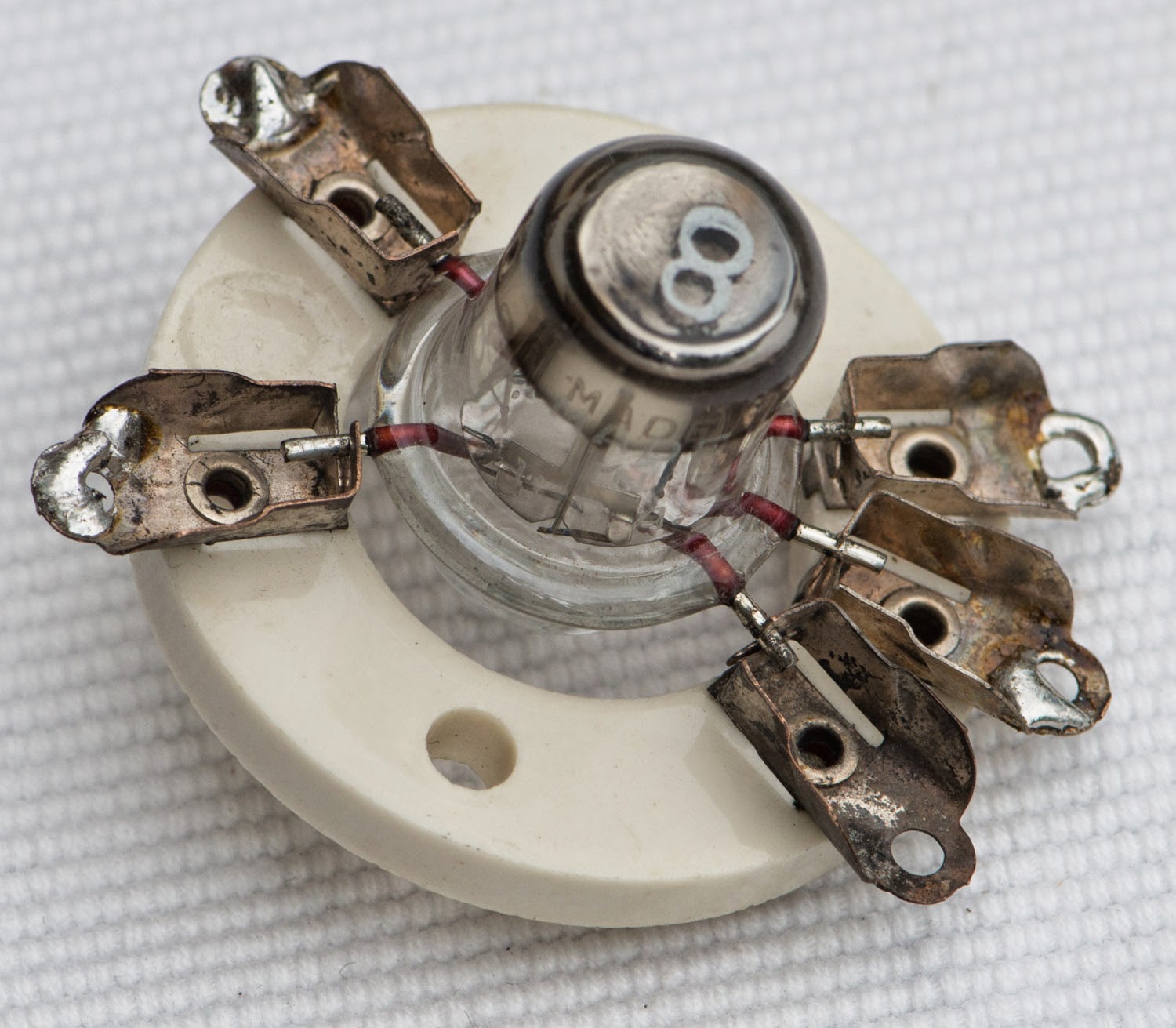 Despite the low filament power, it lights up nicely: 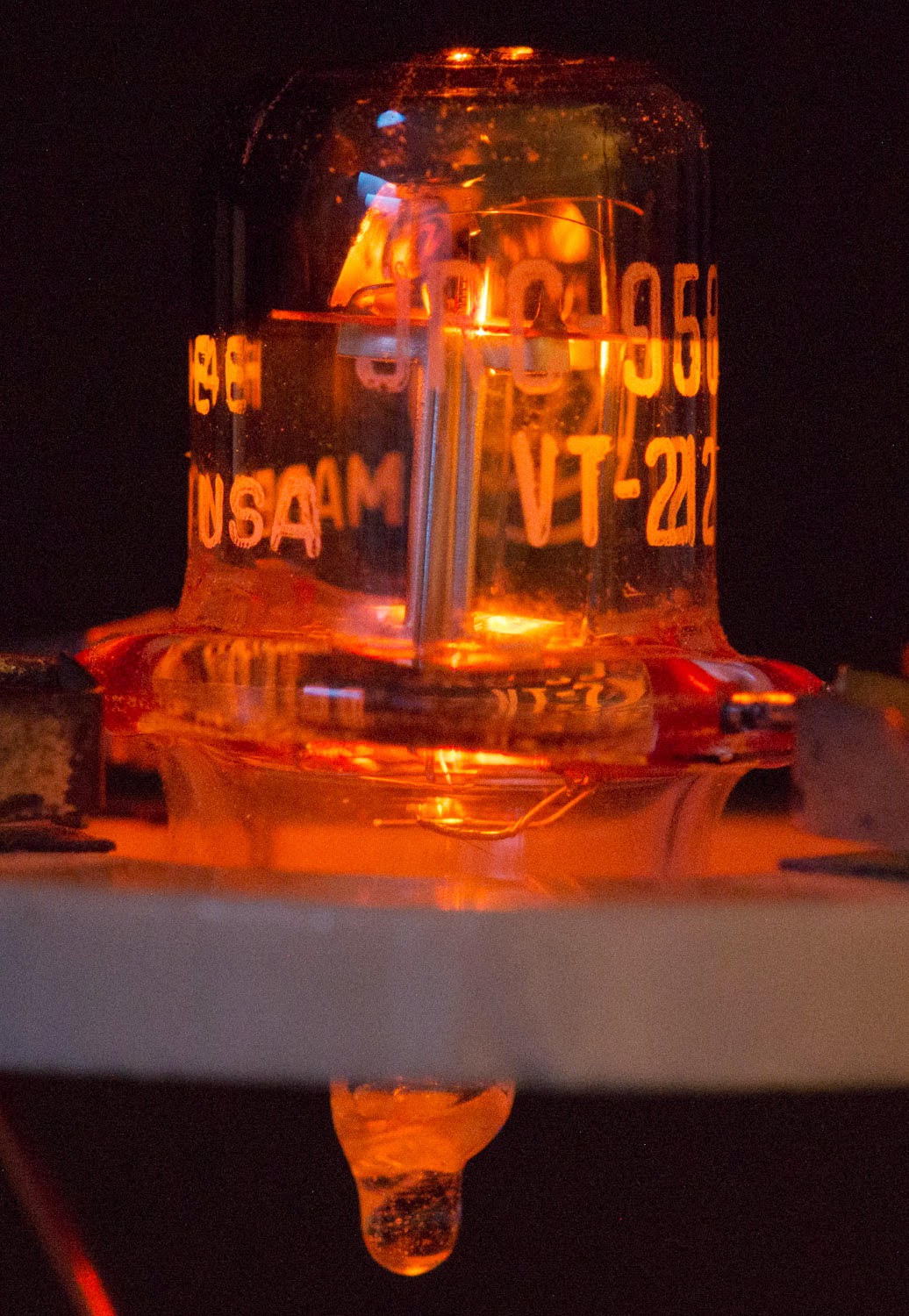 So how could this tube be used in an audio circuit? As mentioned above, the very low filament current  opens up some interesting possibilities. I already wrote a post about the filament bias concept. This could be nicely applied to the 958A without the need to dissipate a lot of power in the filament bias resistor. We could even go a step further and use my DirectPath circuit which was presented in the article about the UX201A Sound Processor. Here is that circuit adapted for the 958A: 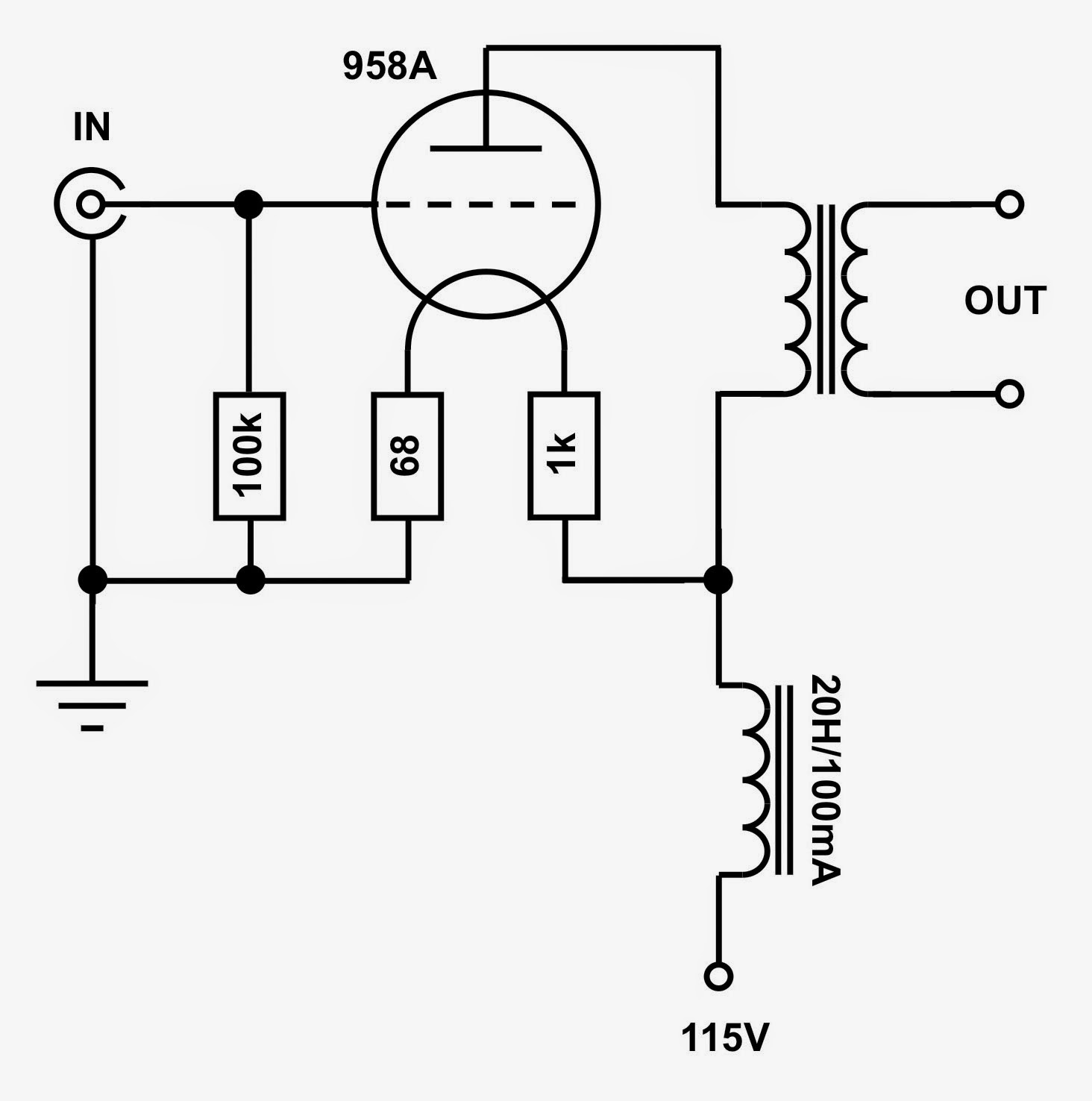 The 100k grid to ground resistor determines the input impedance of the circuit. A quarter Watt type can be used here. The 68 Ohm filament resistor will dissipate less than 1W. A 5W type would be recommended. About 10W are converted to heat in the 1k resistor so best would be to use a 50W type for long term reliability. The output transformer can be chosen according to the gain needed and desired output impedance. For example a Lundahl LL1660 would do here, wired in 4.5:1. The PP type could be used as this can handle enough DC current. The 958A draws about 3mA. For lower output impedance LL2745 or LL1689 could be used as well. A common supply for a stereo gain stage like this would need 200mA. This is easily obtainable from a pair of TV dampers like the 25AX4 which got covered last month. This is a circuit which is truly without capacitors in the signal path. Of course the 958A could also be used with more conventional circuits. For example it could serve as input tube in an all DHT power amp. I usually use step up input transformers in such amps to be able to stay with just 2 stages and still have enough gain. The 958A could provide that gain instead, for example to drive a 26 which in turn drives a 45. 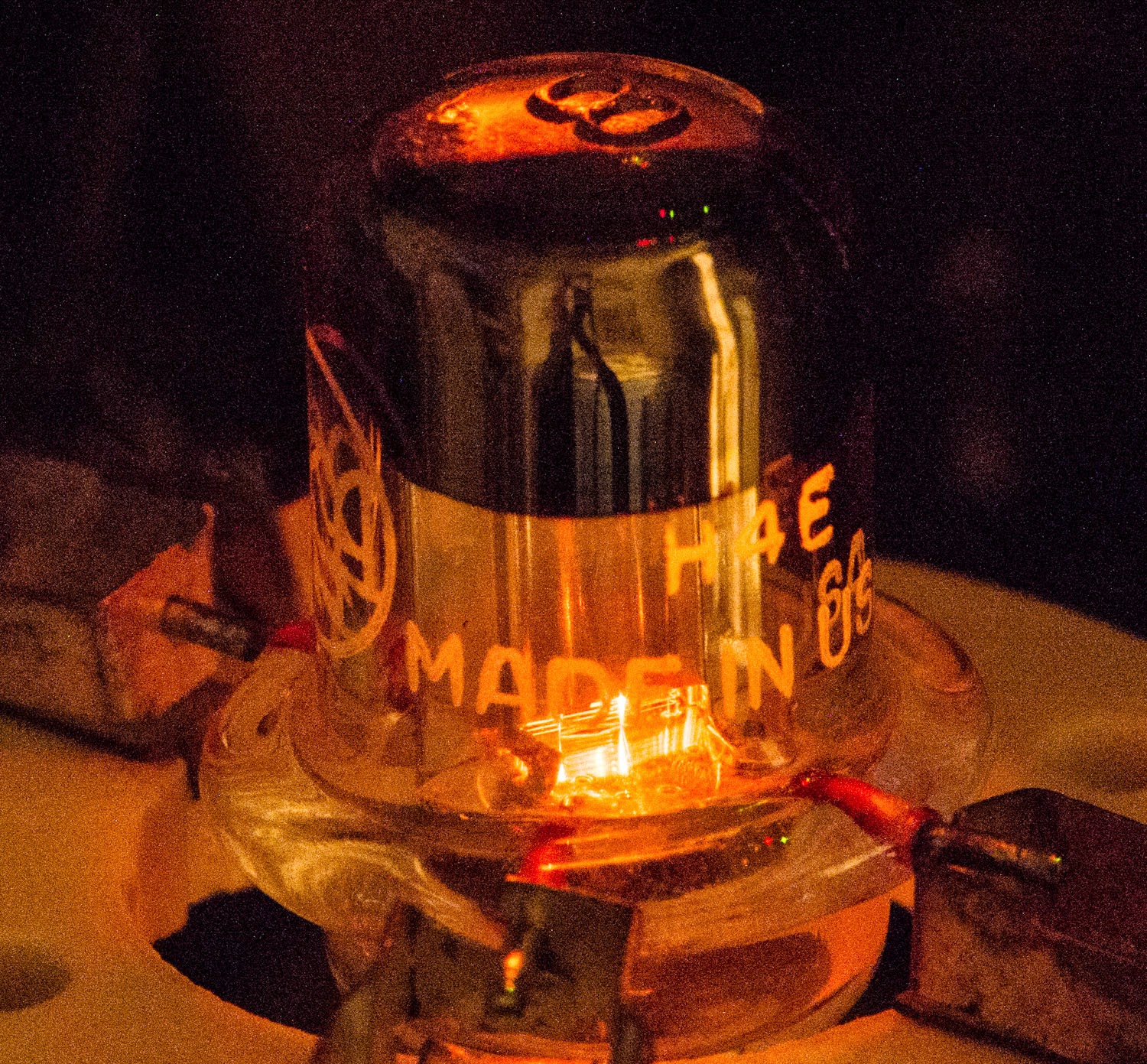 I have never build the circuit above. B+ voltage and the resistors might need some tweaking to get exact filament voltage and operating point. But that would be easy to do and as usual with such circuits, things don't need to be trimmed to super exact values. I never tried this tube so I have no experience about it's micro phonics in audio applications. 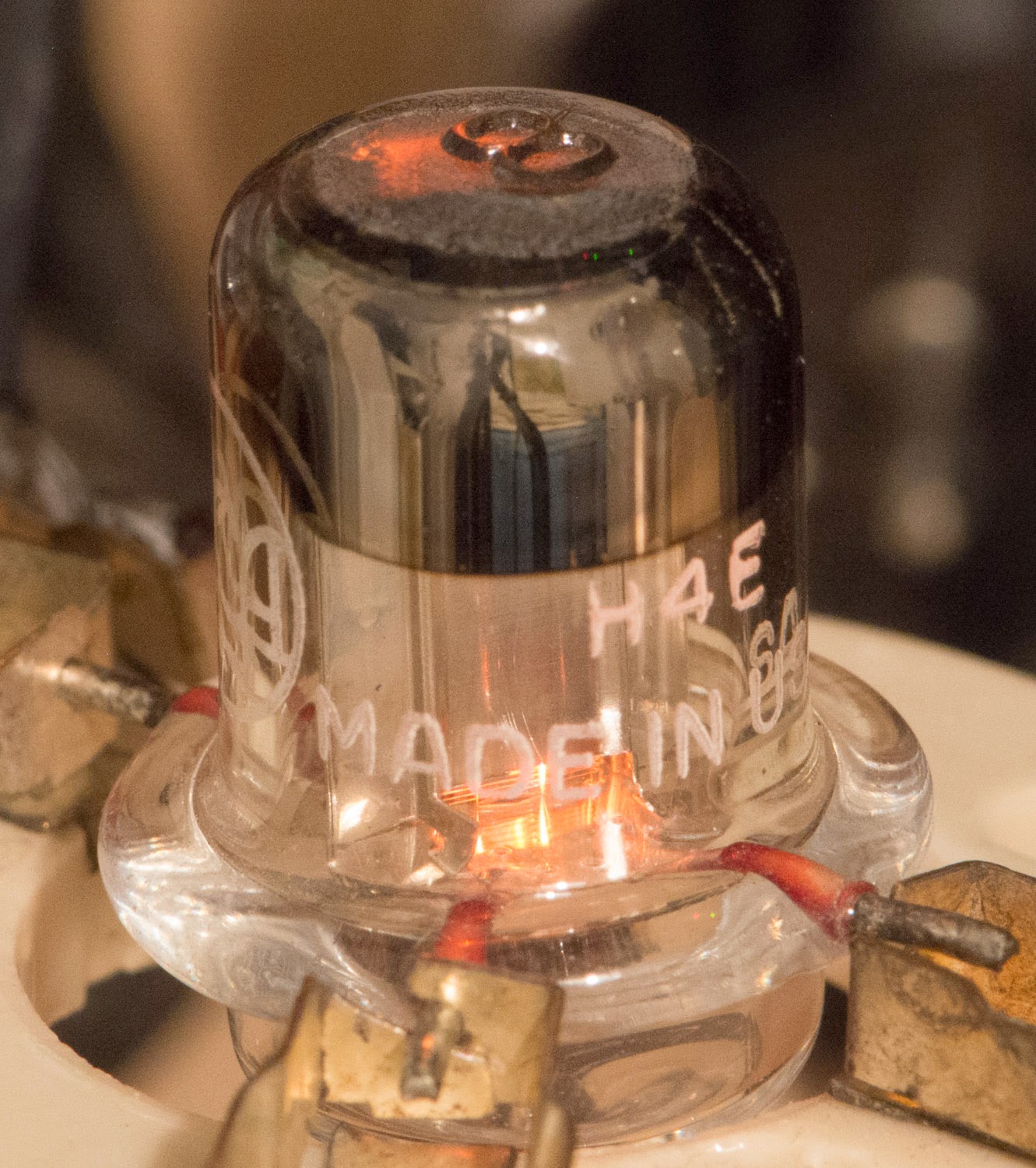 If you are going to try the 958A in this circuit or any other, I would be curious about the results and would be happy to report your findings on this blog. I have too many projects on going and will probably never get around to give this a try. It would be great if someone breadboards this and reports back. 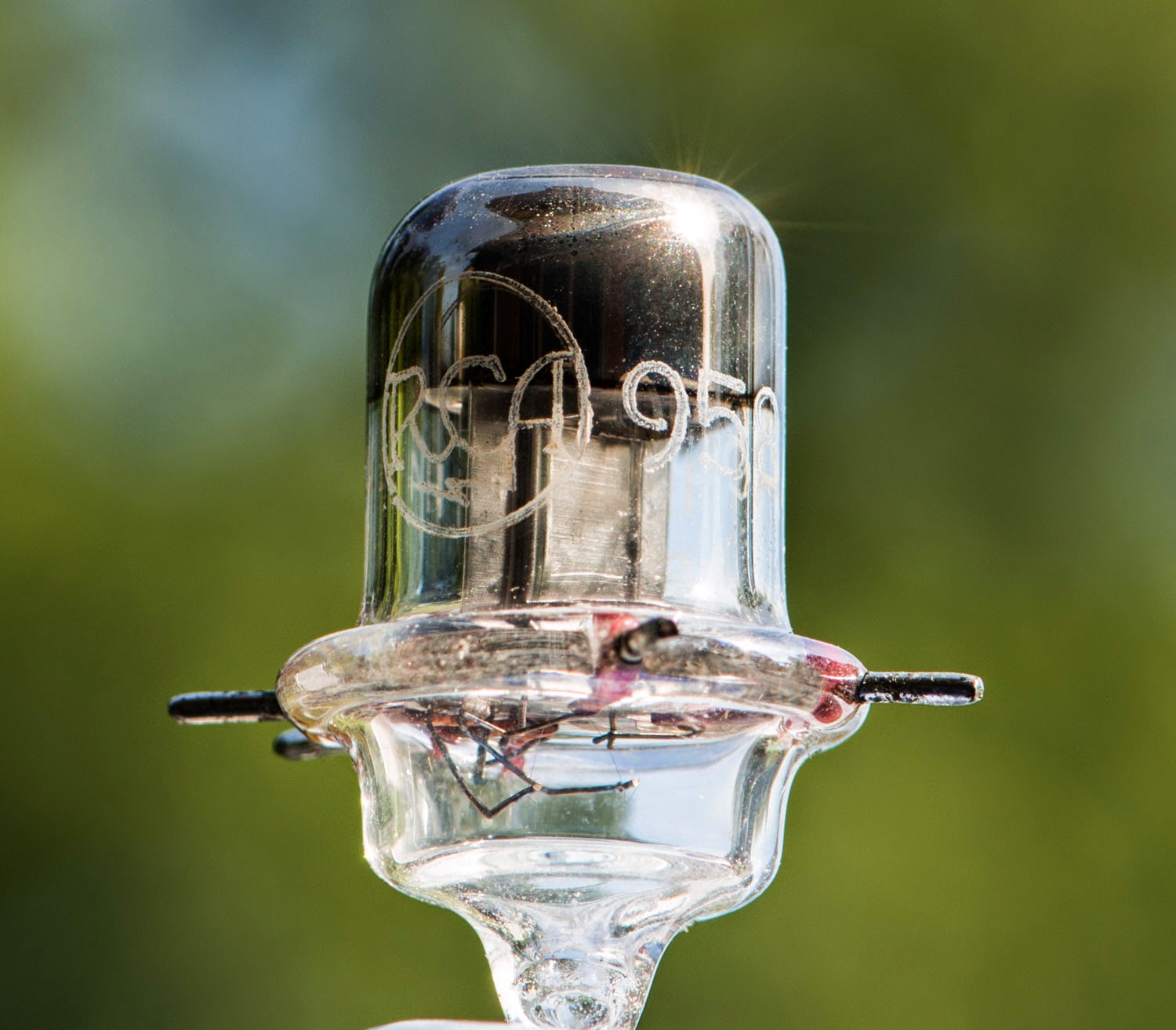 Email ThisBlogThis!Share to TwitterShare to FacebookShare to Pinterest
Labels: 958A, Tube of the month