At last years ETF I had the pleasure to meet Claus from Denmark. He built a D3a LCR phono based on a partial kit from me and brought it to the ETF where it was shown in the danish room. 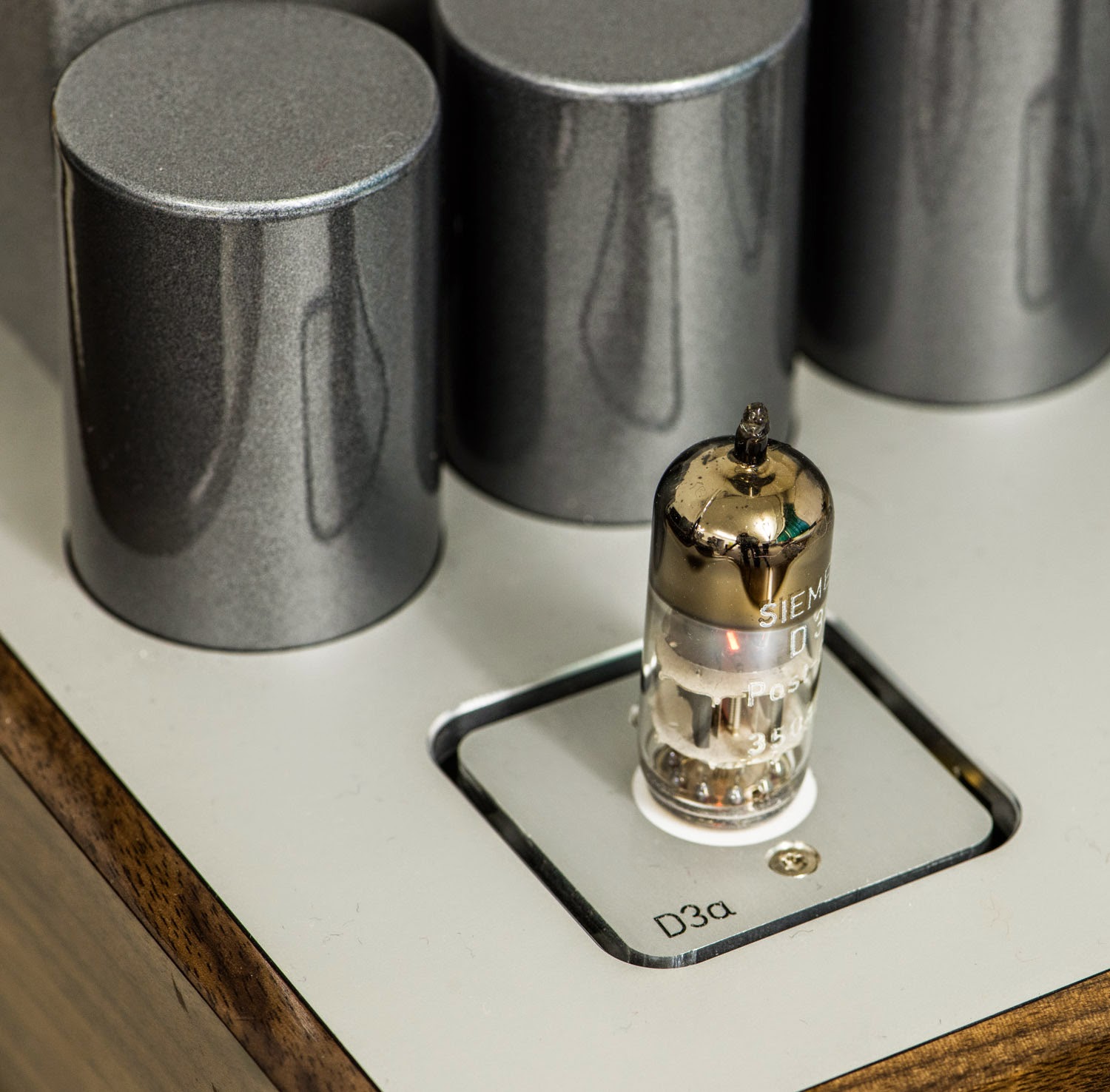 The unit was beautifully built and sounded wonderful. Claus put a lot of effort into the chassis and the result is stunning. He agreed to write up an essay about his experience while building it. And I am vary happy to be able to share his story with you:


How I ended up with a Thomas Mayer LCR phono stage

Where do I start… Not at the beginning, I’ll skip all the boring stuff.
I have been building audio amplifiers and preamplifiers for many years, there even was a time where I thought I would do it as a profession, but that never happened instead it ended up being just a hobby.
I switched from vinyl to SACD 15 years ago, but sadly this format never got to be a huge success, now streaming is the “right” thing, but not for me, I like putting on a album and listening to the whole thing.
I first saw some of Thomas Mayer’s constructions at the triodefestival back in 2000, in fact a LCR riaa if my memory is correct.
After some years with different silicium based gear, I build a 300B power amp a few years ago, and after a long search I found a Thorens TD124 mkII in pristine condition I decided to return to vinyl.
I knew that I wanted something based on tubes and LCR riaa correction, my recently finished 300B power amp is using the C3m pentode, which I looked at first, but having a small stock of D3a tubes the Thomas Mayer LCR phono stage was the natural choice.
I got in contact with Thomas and it turned out that he was selling “kits” we agreed on a price for a kit including all the “iron” and oil capacitors, I would source the rest my self.
Thomas was kind enough to let me borrow his "portrait style chassis” design, so I have ended up with a LCR preamp very similar to the original.
To make sure that all the chokes and transformers would fit in the chassis, I started out with a 3D model, my chassis is a bit smaller then what Thomas uses and my arrangement of transformers and chokes is different.


To save space I’m using the LCR module from http://www.acoustic-dimension.com/ which I can recommend, I would have loved using a Tango module, but it is beyond economical reach. 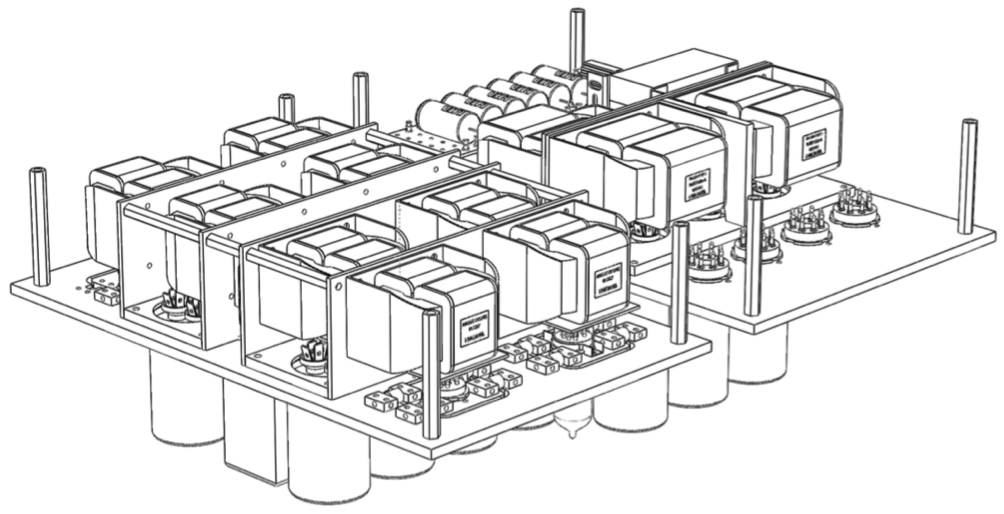 A week after ordering the parts from Thomas, I received all the Iron and caps, all was very well packed so no issues at all.
Shortly after I received the rest of the parts. 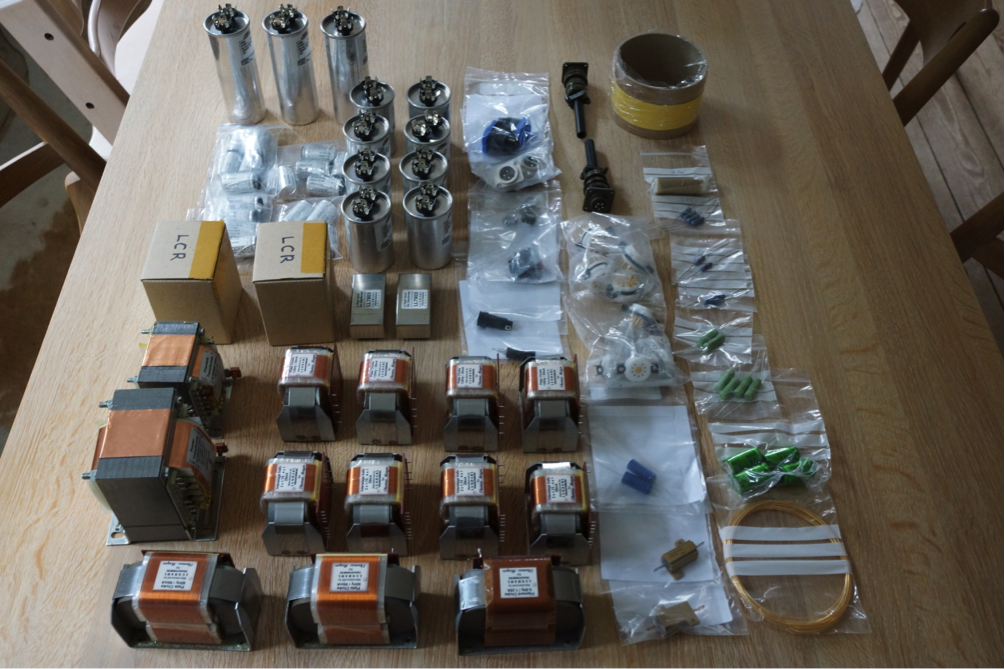 I could finish the design of all the mechanical parts, all the aluminum parts were ordered from Schaeffer AG, they do really nice work and I have used them for several projects.
The first test fit of the amp chassis can be seen in the picture.
I sandwiching the capacitors between the top plate and a sub plate which also acts as fixing point for the chokes and interstage transformers, this was done to keep all the screws hidden, in total there is only 8 screws visible. Now the build could start, I started with the power supply, a purely passive power supply no regulation at all, B+ is L-C-L-C and filament supply is L-C, TV dampers for B+ and schottky for the filament.

The completed power supply before testing. 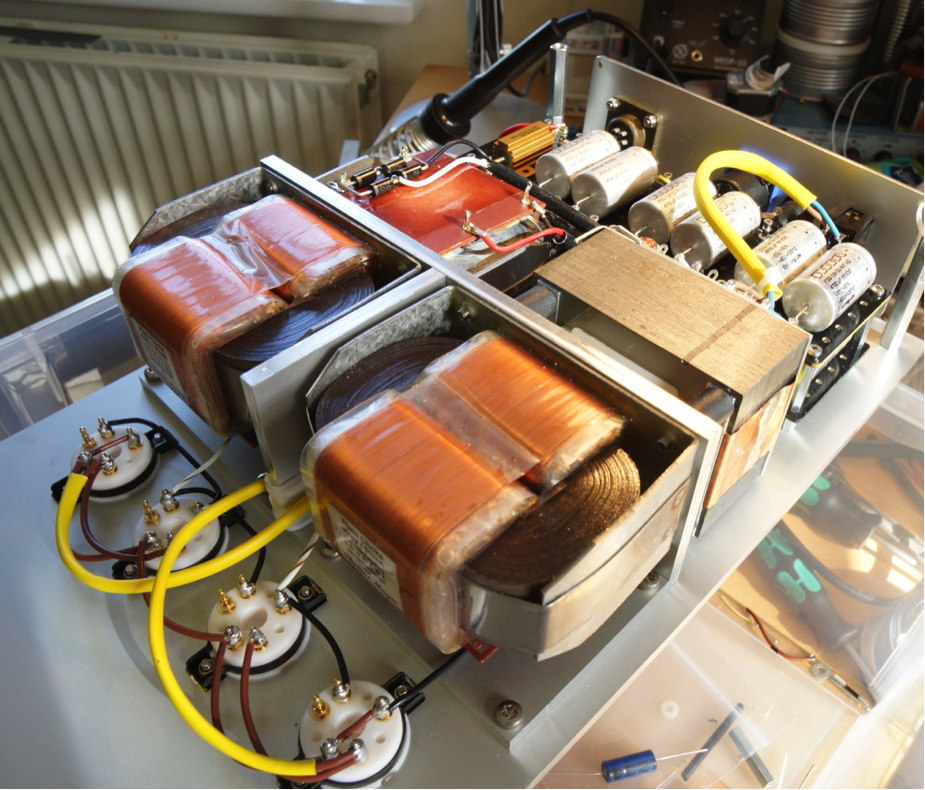 All the chokes and transformers are made for Thomas Mayer by Lundahl and Weiss. 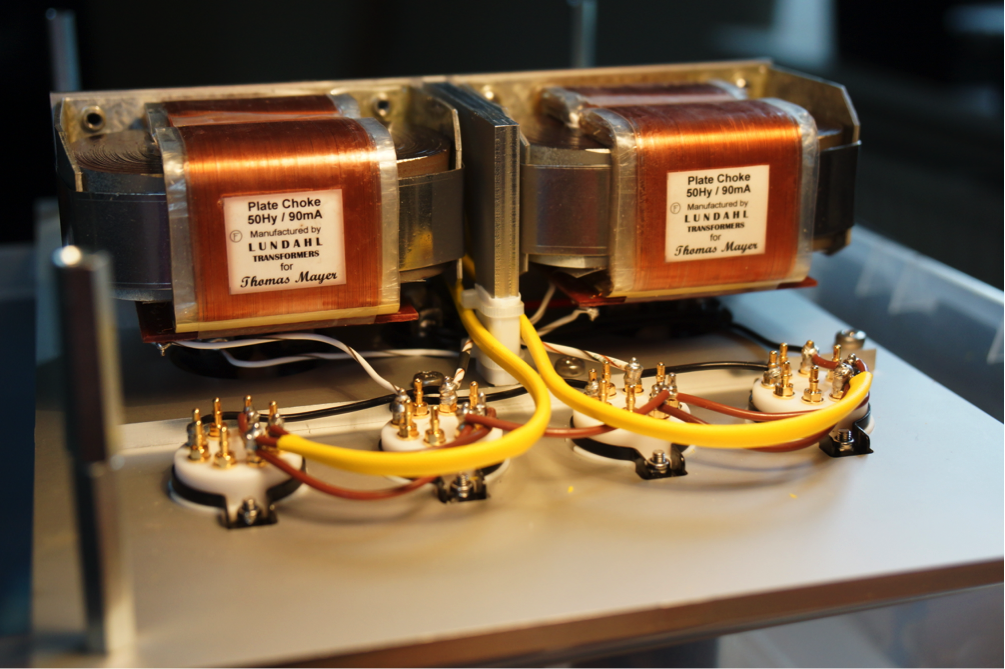 Both the B+ and filament transformer has is a lot of tabs (different voltage combinations) on, which makes it possible to trim the voltages, making it possible to end up with the right voltages without any regulation. 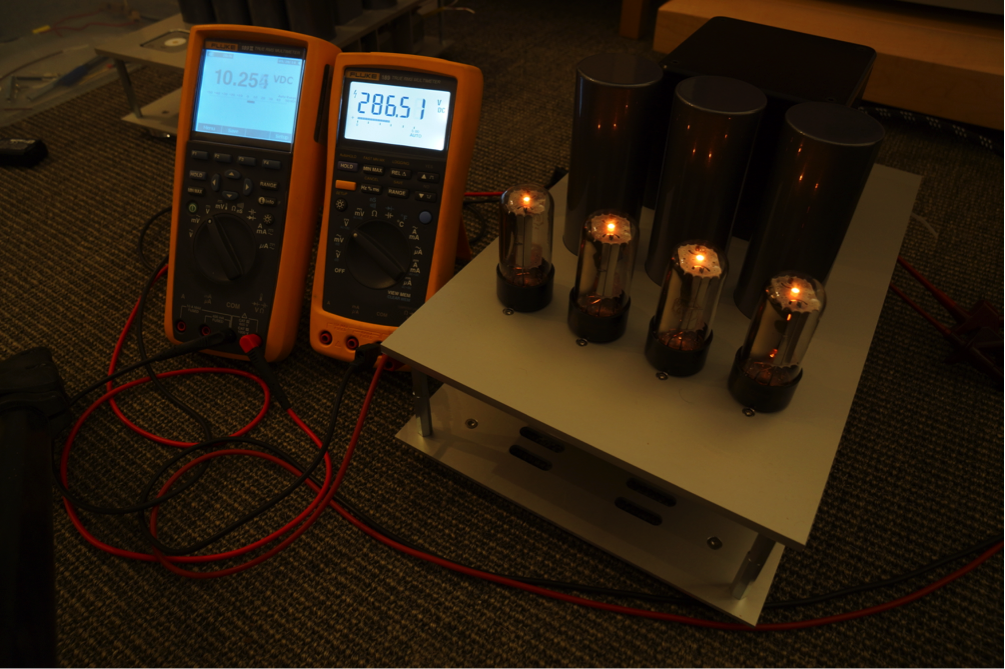 Nice glow from the tv dampers, they take up some room, but they look nice and they have a fairly slow start, which will help extend the life of the D3a tubes, and lastly they have the big bonus of being very cheap. 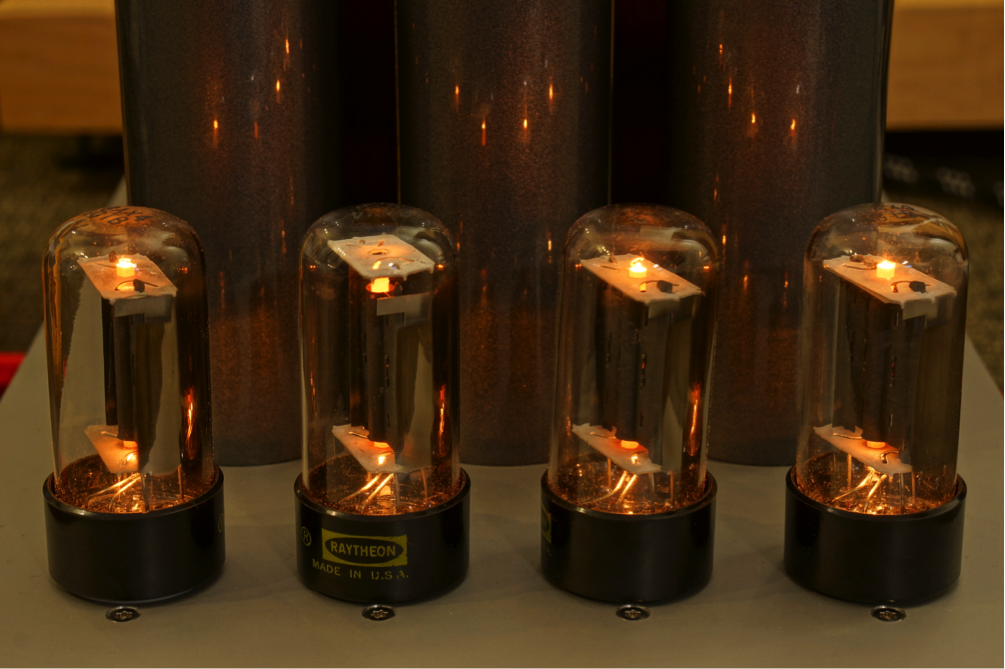 Now for the amp, a simple circuit, but a lot of big parts. Having made a 3D model first helped making the amp as compact as possible, with the added problem that everything has to be assembled in the right order, there is no room for mistakes and replacing a part requires a lot of skill or time to take it apart.

Half of the amp done, all chokes, small parts and most of the point to point wiring done.
The LCR modules are on top of the amp resulting in the shortest signal path possible.
Still missing the interstage transformers and the last wiring. 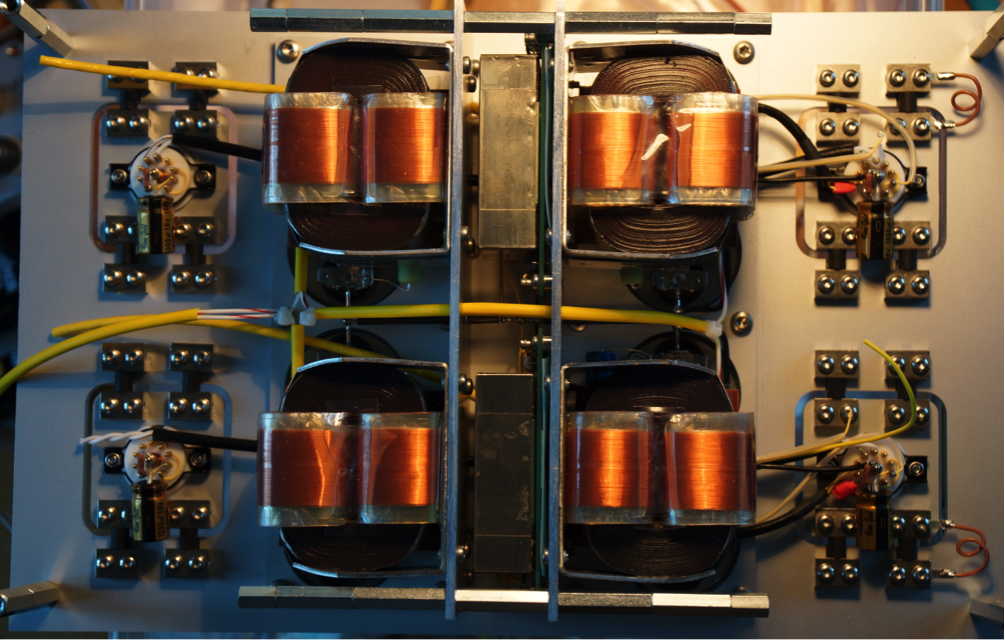 The last parts are fitted, interstage transformers and the final wiring, it ended up being quiet a challenge to solder the last wires.  One thing is making a 3D model, it is totally different assembling it in real life. 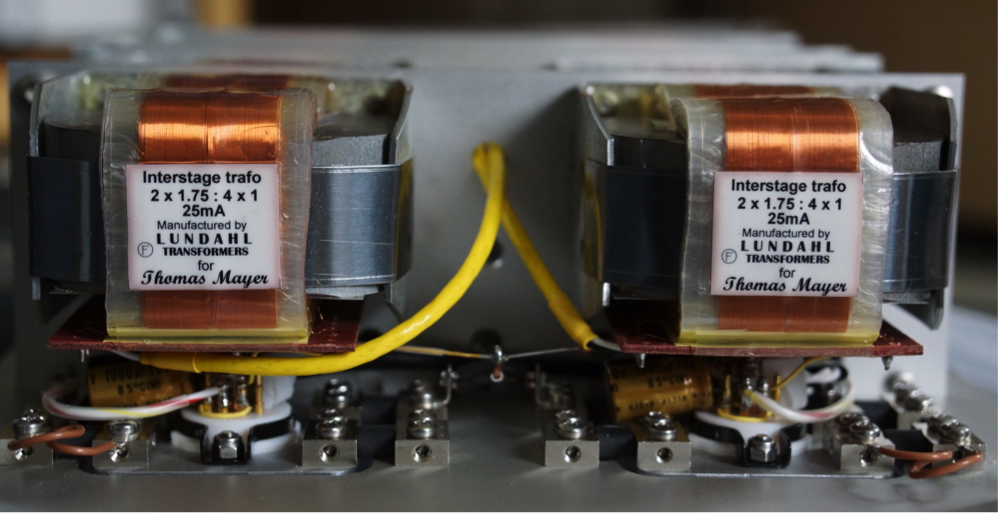 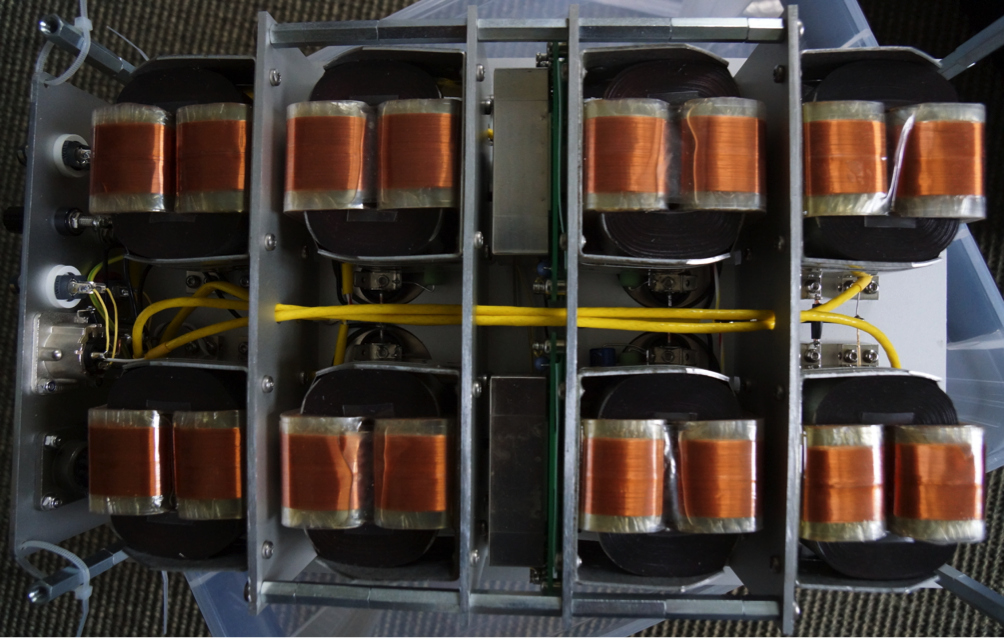 After some quick measurements I was ready for the listening test, so how does it sound ?
Well I’m not the right person to judge that, it will be really difficult for me to be neutral, I could of course use all the standard acronyms, but I wont.
A very good friend of mine gave it a listen recently, his judgment was very positive.
We listened to a stack of very well known records and one of the things that were most noticeable was that we heard new thing from the groves that wasn’t heard before. 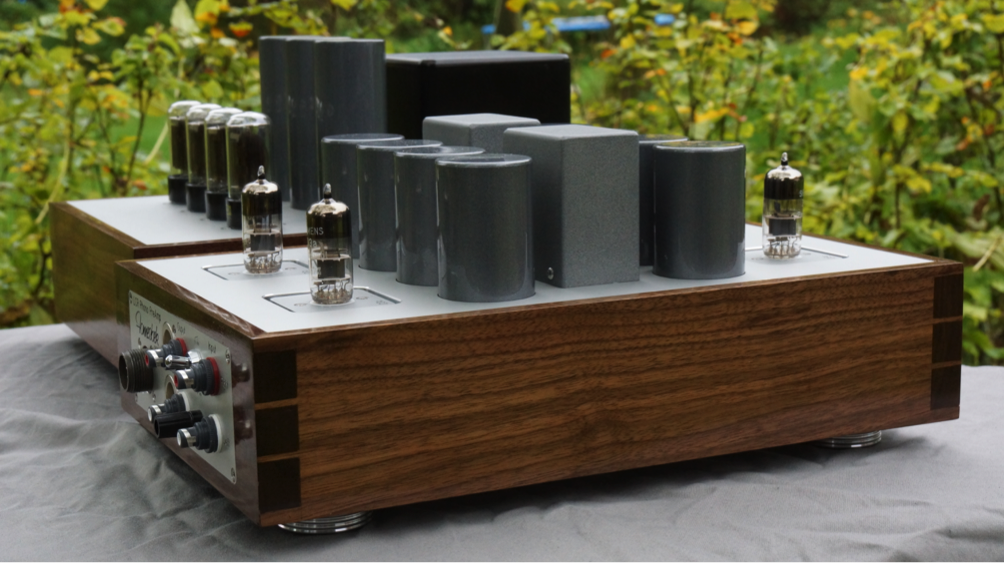 Last words, a very big thanks to Thomas for his assistants during the build, always ready to answer my at times stupid question.
So what’s next ? maybe a matching preamp.

Thanks a lot to Claus for sharing this story! And congratulations for the wonderful build!

Thomas
Posted by VinylSavor at 19:15