Tube of the Month: The 6AX4

As you could already read in previous articles, I prefer TV damper tubes for rectification. My favorite among those is the 6AX4. 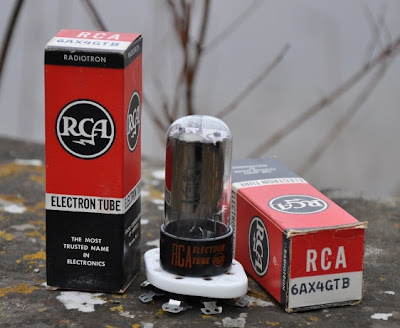 The use of TV dampers in power supplies was advocated by JC Morrison in Sound Practices magazine back in the 1990ies. He mostly uses them as a slow turn on device in conjunction with silicon rectifier bridges. TV dampers have been developed for TV service. Their purpose was to dampen oszillations in the deflection system during the fly back period of the electron beam. This requires a very tough diode which can handle very high peak inverse voltages and peak currents. These properties made them perfectly suited for mains rectification as well. However this was not promoted by tube manufactures since they wanted to continue to sell their dedicated rectifier tubes, which where more expensive. There is still a prejudice against TV dampers as rectifiers because of this. Many years of experience with TV dampers in various power supplies proofed that they are extremely reliable and perfectly usable as rectifiers. Another advantage is their extremely low cost. 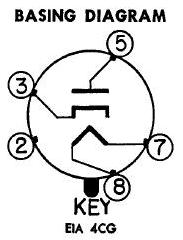 The 6AX4 shares the same base diagram with other similar types like 6DE4, 6DM4, 6AU4 and many others. It is also available with different heater voltages and for series heater connection as types 12AX4, 17AX4 and 25AX4. A detailed datasheet can be found here. The 6AX4's current rating is on the low side compared to some of the other TV dampers. So why did I chose it as my favorite? The current rating is still way beyond the needs of most amps I build. More than enough to power both channels of a SE power amp. When followed by a choke input filter, a 6AX4 rectifier bridge can deliver more than 300mA continous. The advantage of the 6AX4 is it's lower heater current compared to others. It needs only 1.2A. When 4 of them are used in a bridge, the higher heater current of other types can become a difficulty. Therefor I stick with the 6AX4 for most applications. If higher current is required, I use some of the beefier TV dampers. Another big plus of TV dampers is their good insulation between heater and cathode. Please note that this voltage is quite different depending on the polarity. The cathode can be at substantial higher voltage than the heater, while they don't like the heaters to be too postive against the cathode. For the 6AX4 the cathode can be up to 900V DC above the heater potential. This means that all heaters of the 6AX4s in a Greatz rectifier bridge can be wired in parallel and fed from a secondary winding which is referenced to ground. This is safe for power supplies with choke input filters which deliver up to approximately 650VDC. Higher voltage power supplies like those for 211 amps will require at least 3 different heater windings for a rectifier bridge to ensure cathode to heater voltage is not exceeded. The schematic below illustrates how the heaters need to be supplied and biased in the case of higher voltage PSUs: 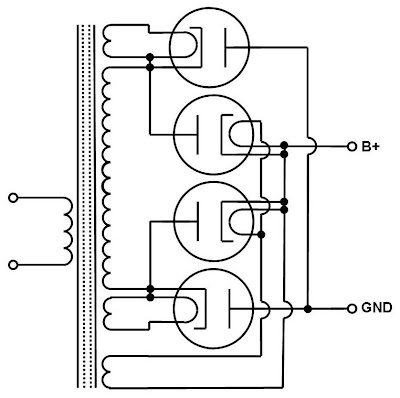 The 6AX4 was available from almost any tube manufacturer. Although production of this tube has ceased a long time ago, it is still available in large numbers. Below is a selection of 6AX4 tube boxes of different brands:

The 6AX4 was made in various forms, most with the common large Octal base, in later years it was also broduced with the flat 'coin base':

The last photo shows a 6AX4 Graetz bridge in a power supply: 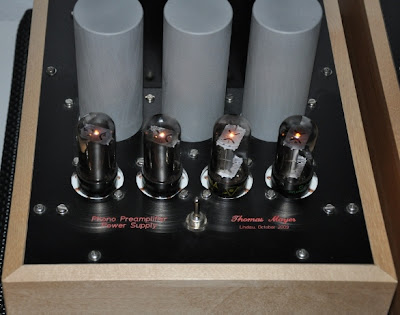 Email ThisBlogThis!Share to TwitterShare to FacebookShare to Pinterest
Labels: 6AX4, power supplies, Tube of the month