Guest Article: My way to the 6CB5A

Martin from Munich sent me this article for publishing. Martin built a SE 6CB5A amp based on the concept which I presented in the single ended amplifier concept series. 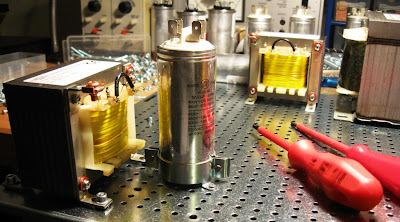 First of all I have to tell you that I’m a guitar player. Some years ago, someone challenged me to build a tube-amplifier on my own. So, I bought some books about tube circuits and studied many schematics that can be found in the web. Round about 6 months later, I’ve built a little PP-Amp with 100V plate voltage and a horrible efficiency factor and I was as proud as a peacock.
After that, I’ve started thinking about listening to music with tubes. So I found a well reputed chinese tube-amp on ebay. Sure, a fascinating amp compared to my old equipment, but I always thought there must be a way that music will sound better still. So I became a member in a german tube forum and I met Thomas there.
Thomas started to develop the 6CB5A-amplifier in the forum and I was amazed about the power supply, instead of electrolytic capacitors he uses paper in oil caps and choke coils.
He also uses transformer coupling between the driver and the power tube instead of
a capacitively coupled connection.
At the first demonstration of this amp I had the chance to meet Thomas and I had also many questions about his design. He answerd patiently until I understood the benefits of the design he had choosen and I started to build this amp.
This was in autumn of 2008 and, many questions later, in spring 2009 my amp was finished. This amp dosen’t sound warm or analytical, this amp only sounds musical. Thats all, no big deal, but often a long way to go till it suits. Fortunately this is only my second audio tube amp and I already have reached my goal.
(Please do not ask how many speakers I’ve tried until I found the right ones : - )
Til now I’ve heard many amps of Thomas, and meanwhile I’m sure that he has gone this uncomfortable way many times until he developed his skills in building tube amps at this high level.
And If you know which side of the soldering Iron is the hot one, and you have respect for high voltage, and you don’t want to spend the countervalue of an Italian sports car for your hifi gear, then is this your chance for a great musical experience. 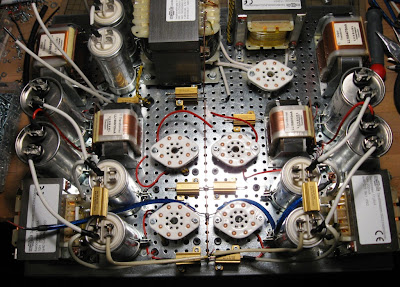 When I published this amplifier concept on a german discussion forum, Martin was among the first DIYers who built such an amp. In the meantime quite a few 6CB5A amplifiers have been built. 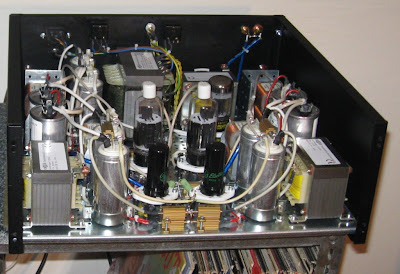 Thanks Martin, for sharing your amplifier building experience!

Thomas
Posted by VinylSavor at 15:34