Here a few photos and impressions of the Cool Gales Analogue Fest which took place in Bath, UK, last weekend. The event was hosted and organised by Ivan Kursar of Cool Gales at the prestigious Bath and County Club. 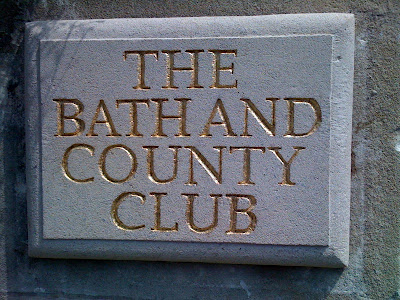 The Bath and County Club is situated in the center of the city of Bath, within walking distance of some of the impressive attractions of the city like The Circus and the Royal Crescent. The Club is a sand stone building which is very typical for the architecture in Bath: 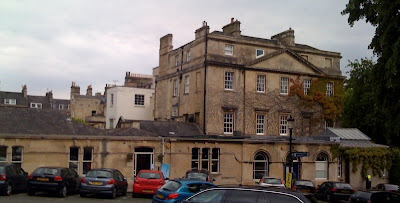 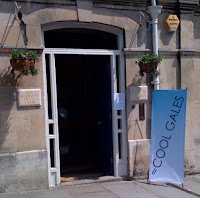 A banner showed the way to the entrance. In total 4 listening rooms had been set up with various systems. As announced in my previous post, I brought the newly finished Octal Preamplifier Mk2, along with a flea power 46 DHT amp. Ivan's SE 6CB5A amp was there as well so that we could switch between power amps. I did not know the speaker to which my amps would be hooked up so it was good to have the 8W of the 6CB5A available in case the speaker would need more power.

Here a photo of the electronics: 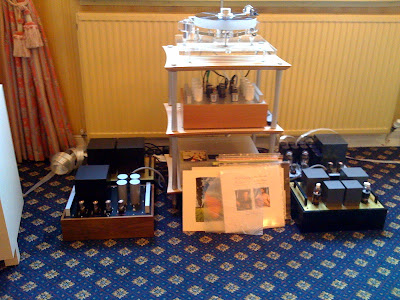 Octal Preamplifier in the middle in the rack, 6CB5A amp on the right side at the front. 46 amp behind it. On the left side the external PSUs of the preamp and 6CB5A power amp. As a source we had an Analogue Alchemy stage two turntable with a SME tone arm and a Lyra Delos cartridge. As a digital source we used an Esoteric CD player. But 99% of the time we played vinyl.

Most important, the speaker choice: Ivan teamed me up with Julius Hyde of Aspara Acoustics, which turned out to be the perfect match. Julius brought his HLISE speakers which easily filled the rather large room with sound even when driven by the 1.5W of the 46 amp. The speakers had a very relaxing yet high resolution sound. A beautiful balance across the frequencies. They reproduced all the colors of tone which I know from my amps: 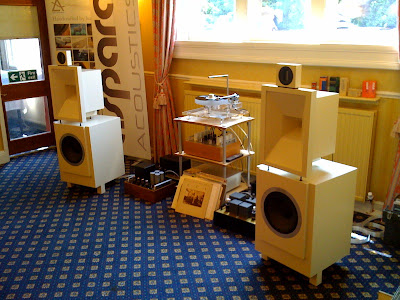 Occasionally we switched to the 6CB5A amp and really cranked it up. Even at extremely loud levels there was no hint of the amps starting to clip and the speakers kept playing smoothly, no trace of getting annoying, no matter which source material. We received a lot of positive feedback from the audience. People seemed to enjoy the presentation and stayed in our room for long times. I don't think it was the coffee which was provided for free, which kept them in the room...

This was a fun event and I'm glad that I have met Julius and had the chance to set up such a beautifully sounding system with him. 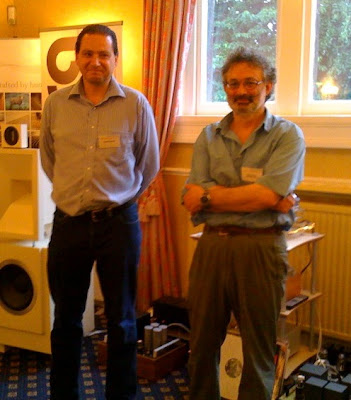 The last foto shows Julius (right) and yours truely at the end of a HiFi exhibition of a different kind. Thanks to Ivan Kursar for organising all this. I'll be there next year and would love to team up with aspara again.