Tube of the Month: The 6SC7

This months tube is a indirectly heated small signal triode which I chose as the input tube of the phono section of my new version of the Octal Preamplifer. The 6SC7. 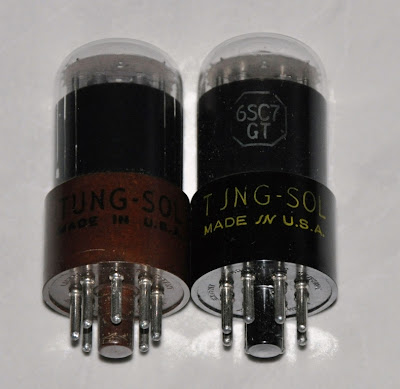 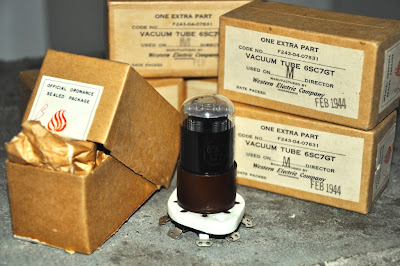 The pictures above show 6SC7GT tubes which are branded Western Electric on the box. But the tubes inside were manufactured by Tung-Sol. In this case WE didn't even bother to put their own label on the tubes themselves. Rebranding was common practice. In this case WE probably had a contract to deliver this tube type to the military. They bought the tubes in bulk from another manufacturer and put them in their own boxes. 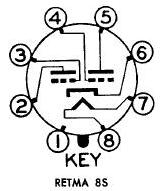 The 6SC7 is a dual triode with a common cathode. With it's amplification factor of 70 it classifies as a high mu triode. Plate resistance is 53kOhm. I use it with both halves in parallel, which yields half the plate resistance or 26.5kOhms. This makes the tube very suitable for a phono input tube. Detailed information can be found in the datasheet.
The tube comes in several versions, either with a metal enclosure, or in a glass tube. The latter version is called 6SC7GT. It is also available with a 12.6V heater as 12SC7.
Unfortuntaley the 6SC7 is quite rare and thus expensive. Fender used it in some of their guitar amps. As far as I know no 6SC7s are currently beeing manufactured.

The 12V version is more commonly available. Luckily I could score a carton full of them: 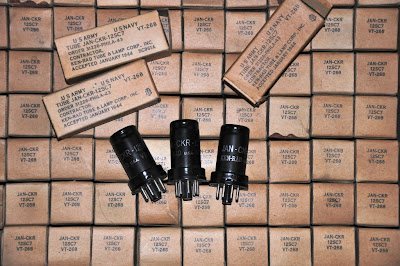 In my Mk2 version of the Octal Preamplifier the 6SC7 proved to be perfectly suitable for phonostages. It replaces the ubiquitous 6SL7 which I used in the Mk1. It gives a very detailed yet smooth sound. Exactly what I'm looking for. Lot's of tone and color. No problems whatsoever with microphonics, which is important in a phono stage. Both halves paralleled give a low enough plate resistance so that inductive loading is possible. And that's how I'm using it, with a 800Hy plate choke. This yields it's full mu, so it provides lot's of voltage amplification. Exactly what you want as the first stage in a preamp.

The plate curves give an indication why it sounds so good. They are very evenly spaced which promises low distortion. The photo below shows the plate curves which I took from one of my samples with a curve tracer: 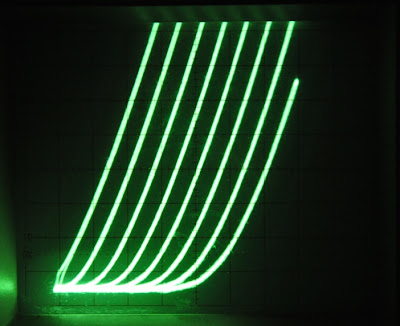 If you are looking for a high mu tube and want to use something else as the 6SL7 tube or if you look for an Octal based alternative to a 12AX7, the 6SC7 might be the choice for you. If you can't find any, check for the 12V heater cousin. They are just as well performing.

Thomas
Posted by VinylSavor at 00:15

Email ThisBlogThis!Share to TwitterShare to FacebookShare to Pinterest
Labels: 6SC7, Tube of the month