Part 1 of this series about the development and building of a field coil speaker system showed the first trial for a bass cabinet and the selection of drivers and horns. The Kilimanjaro Series woofers will initially be fed from a lab supply. Later this will be replaced by my own PSU. Today I will show the building of the field coil supply for the A2000 horn drivers which are equipped with high voltage field coils. 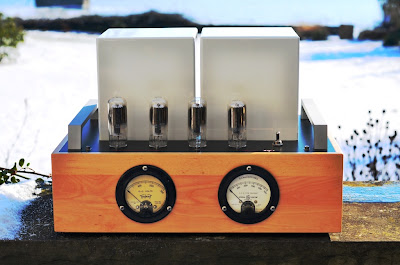 The high voltage field coil version was chosen so that the PSU can work with tube rectifiers. The coils can work from about 90-120VDC and need around 300mA each. Quite doable with TV damper tubes as rectifiers.

The 4 photos on the left show the assembly process. Everything starts with the top plate. The first photo shows the plate with switches, connectors and tube sockets mounted. Then the plate is fixed into a rig which eases further assembly. In the second and third photo, capacitors and the power transfromer are mounted and wired. 6CG3 TV dampers are used due to their high current capability. The transformer is the largest from my own mains transformer series. Since two separate power supplies for the drivers would require two separate PSUs, it was decided to feed the two A2000s in series. Doubling the voltage in a tube power supply is almost no additional effort, if the power transformer can deliver the voltage. Doubling the current would require two separate supplies since 600mA is beyond the capability of the 6CG3 and would require big chokes for filtering. The configuration is a full wave bridge with 4 TV dampers feeding a LCLCLC choke input supply. The chokes are Lundahl LL1638/4Hy which can handle 400mA DC. The last capacitor is split into two separate ones for decoupling of the voltage of each driver.  The transformer has various taps to allow secondary voltage increments in 25V steps. In addition the primary has taps for 220, 230 and 240V. These taps have been used to provide adjustment in 7 individual 5% steps. With two more switches the filter chain can be switched between choke input or cap input. Two different sizes are selectable for the input capacitor: 1uF and 4uF. The 4th photo shows the finished PSU with the chokes added and wired. Everything is placed in the wooden frame. Two vintage panel meters are inserted in the front to monitor voltage and current. The voltage meter measures the entire voltage across both coils. The capacitors and mains transformer are hidden unter covers which are painted with a white metallic effect varnish. 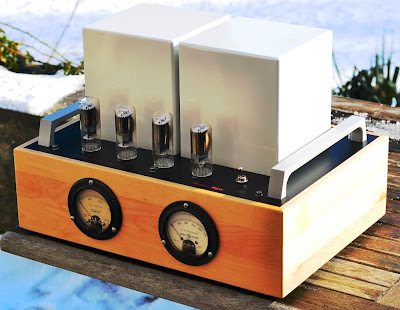 The switch matrix for fine adjustment:

The backside with switches and connectors. Two different connectors are wired in parallel for the field coil voltage. 2 sets of banana jacks and an amphenol screw type terminal which provides connection for both drivers: 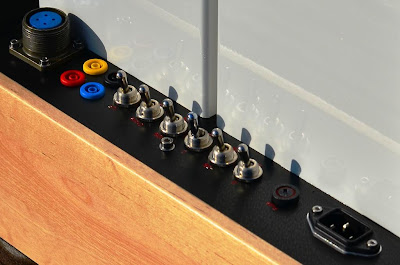 The two handles are convenient for moving the PSU around since it is quite heavy. 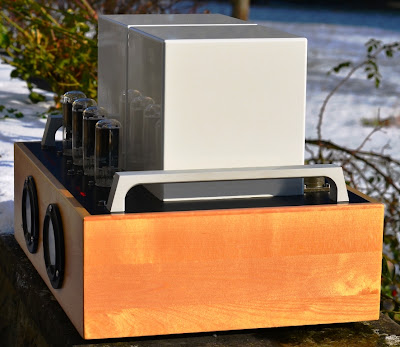 The power supply in operation: 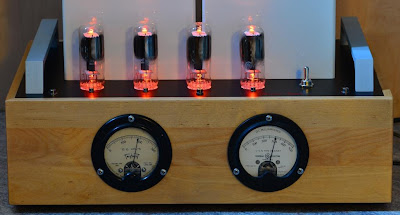 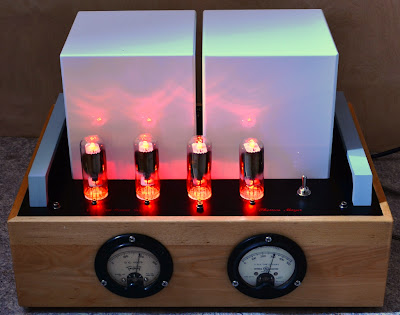 The power supply operates nicely and stable. Voltage adjustment can be done while the supply is on. No need to power down for switching between the taps. This is easier on the TV dampers since one of the main factors determining liefetime is cycling of the heaters. Not that it would be a big issue since these rectifiers are very cheap. 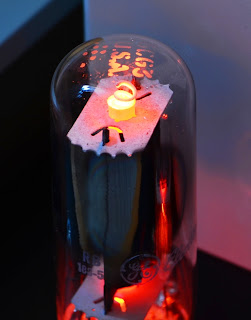 The 6CG3 seems to be the perfect choice for such a supply. I'm using it since quite a while in the power supply of 211 monoblocks and it works flawless there in a voltage doubler circuit which is quite demanding. I expect them to last many years in the field coil PSU. No special precautions were necessary with regard to heater-cathode voltage. The heaters are simply referenced to ground. Since the 6CG3 draws a bit of heater current (2.1A) two heater windings are used. Two tubes share one winding. The photo on the right shows a nice close up of a 6CG3 in operation. There are other TV dampers who could be used for this purpose as well. For example 6CJ3 or EY500. The latter is probably easier to be found with heaters for series string operation. That is the PY500. The american designations for the these tubes are 6EC4 and 42EC4.

Before listening can start, the speaker needs a crossover. This will be a active set up with a passive crossover placed between the line stage and the separate power amplifiers for horn drivers and woofers. The next part will show the initial version of this crossover. Stay tuned! 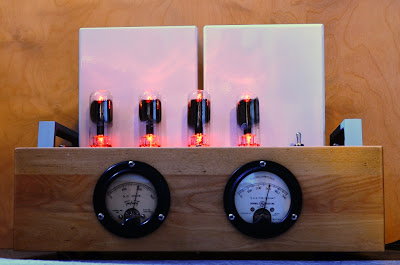