Finally found some time to continue with the field coil speaker. Since the high voltage field coil supply for the horn driver is finished, the only thing missing to play the horn and woofers together is a crossover. 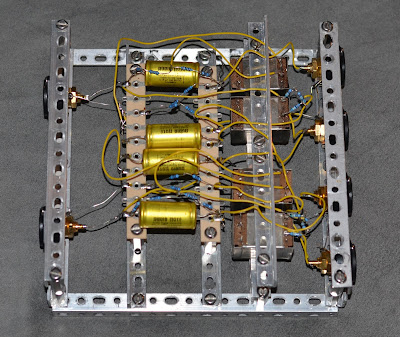 For a first trial a quick lash up of a crossover was built. Since the speaker is meant to be driven actively with separate amps for bass and mid/treble, the crossover will be placed between preamp and power amps. The crossover is based on the same concept as the one which I already presented here. Low impedance LCR type high and low pass filters. 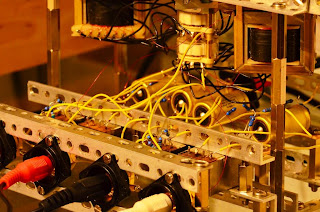 The coils are some Lundahl LCR RIAA coils wired for 180mH. This network splits the signal from the preamp into the lows which are routed to the bass amp. For the first set up I chose a single ended 6CB5A amp. Slage 1dB/step attenuators are added at the high pass output for adjustment of the horn level to the bass. See close up on the left. The horn driver is driven by a 45 amp. How does it sound? I immediately liked what I heard. Some rough adjustement of the levels and I played record after record. These field coil drivers are capable of an incredible tone. Very realistic and immediate presentation. The 45 amp with 10Y driver really shines at the A2000s with beryllium membrane. Deep bass is a bit lacking still, but that's no surprise with the enclosure which is basically an open baffle. Definitely need to work on that and maybe another woofer for sub bass support. 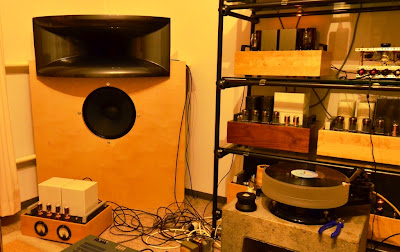 The Field Coil supply for the horn drivers works beautifully. It induces no noise of it's own which was expected with the three chokes used along with the oil caps for smoothing.

Next up are some measurements of the set up and adjustments to the crossover. Once the crossover is final it will be built into a nice chassis in the style of the modular preamp as presented in resent posts.

But for I mess around with the set up, I will enjoy that tone for a while and oh those sweet voices....

Thomas
Posted by VinylSavor at 23:38