some progress on the modular preamp. The LCR unit is finished. 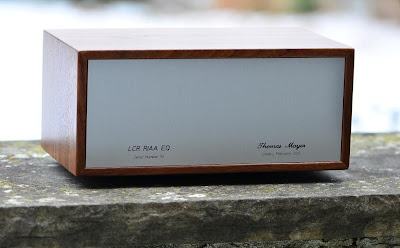 This fitted into one of the short chassis since it's purely passive and just contains a 600 Ohm LCR RIAA EQ network for each channel. The phono input stage chassis would have enough space to fit them in there as well. I wanted to have it separate to be able to compare different EQs and also to later replace it with a variable EQ unit. 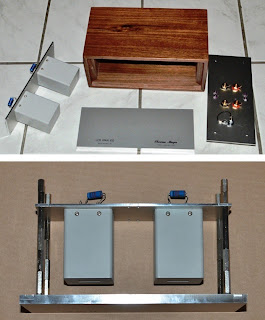 Building this unit was a quick job since I used a pair of the famous Tango EQ600P units. These have the complete network including resistors and capacitors integrated into a nice housing. All which needs to be added is the 600 Ohm terminating resistor. These units are not made anymore by the current ISO Tango company. Production of these has ceased when Hirata decided to close the audio transformer unit and Tango was bought out by the employees. So they are hard to find these days. Soundwise the Tango EQs are among the best that exists out there. Actually it's a shame to hide these beautiful units insie a chassis. But I had a pair which was a bit beaten up cosmetically from usage in different phono stages. The  Tangos are mounted on a sub plate which is held between the front and back with some bolts as can be seen on the photos.

Wiring was quickly done. The back panel just has two pairs of RCA jacks for input and output and a binding post for grounding the chassis if needed. 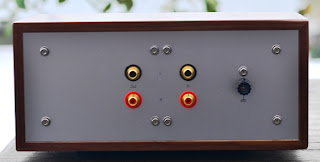 In the meantime the missing material for the phono input stage has arrived and the phonostage will be completed soon. The next installment of this series of articles will show the entire phonostage. Two versions of linestages are planned in a similar chassis style. One with directly heated triodes which will have the tubes visible and another one with indirectly heated tubes which will use enclosed chassis like the phonostage.

Thomas
Posted by VinylSavor at 17:49