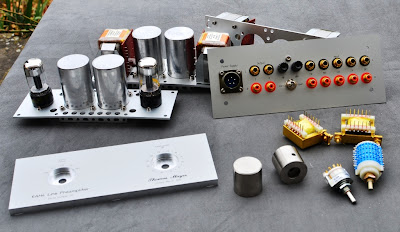 The photo above shows the sub assemblies of the 6AH4 line. It will use Slagle TVCs and Lundahl line output transformers. 5 inputs, one of them will be transformer coupled with an input transformer with a 1:4 step up ratio.

The power supply for this line stage is already finished and tested. It just waits for the wooden enclosure: 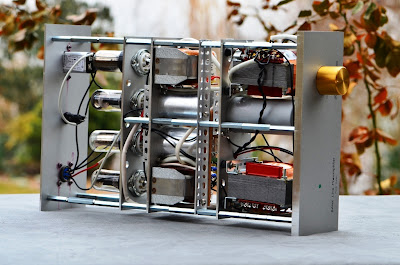 The circuit is the same as the line section in the Octal pre Mk2.

While waiting for the next batch of wooden enclosures, I started assembly of the directly heated linestage: 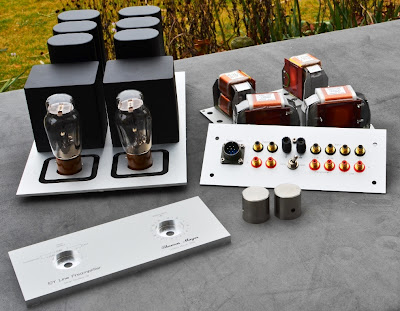 This is a bit different from the 6AH4 linestage. There will be a metal plate on top on which the tube sockets, output transformers and capaitors are mounted. These parts would not all fit inside, so some had to go on top. And it would be a shame not to show the beautiful 10Y tubes.
A close up of the top plate: 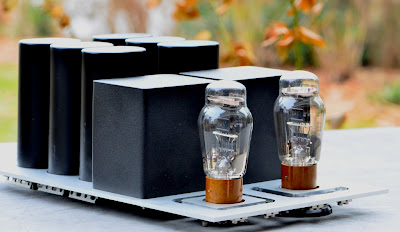 The tube sockets are mounted on vibration damped sub plates: 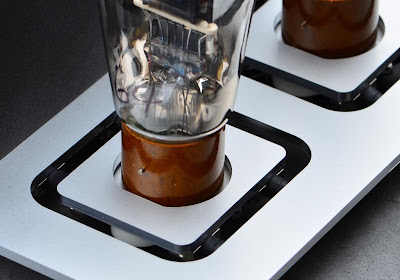 Different look this time, no screws visible from the outside.
The power supply sub assemblies: 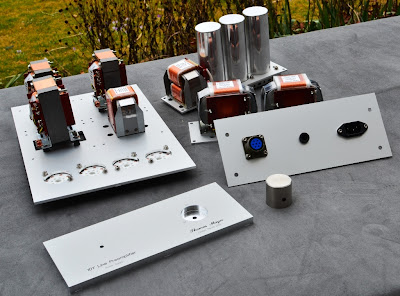 Again some parts had to go on the top side, the power transformers, one of the B+ chokes and the rectifier bridge which will be built with 4 6AX4 TV dampers. The transformers and choke will later dissapear under transformer covers. Inside the chassis will be the second B+ choke, filament chokes, filament rectifiers and B+ smoothing caps.
Best regards
Thomas
Posted by VinylSavor at 16:50