Tube of the Month: The 6AH4

Last month we had the 10Y, a directly heated triode which I mostly use as line stage or driver tube. In those applications it requires special care in the filament supply for low noise and good sound. This months tube is an indirectly heated triode which is my favorite choice for such applications when the budget is limited or available space is constrained and does not allow for an elaborate filament supply. The 6AH4: 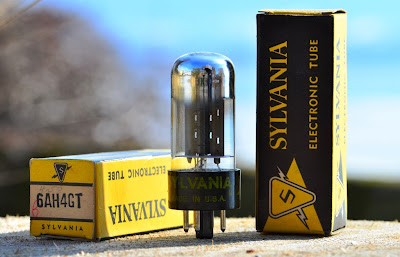 This is a single triode with a 6.3V heater. It can be heated with AC in the above mentioned applications without any hum. This reduces the effort considerably. I already used the 6AH4 in the linestage section of my Octal preamplifier Mk2. It serves very well in that preamp. 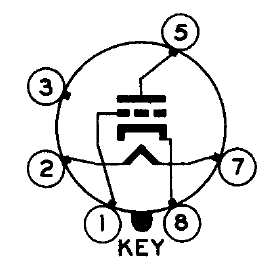 The 6AH4 has an octal socket. The pinout is pictured on the left. Amplification factor is 8, which makes it perfect for usage in a linestage. Most linestages have way too much gain nowadays. The 6AH4 when used with a line out transformer with a moderate step down ratio will yield an amplification factor of 3-6dB, depending on the transformer used. In my book this is the right amount of gain for a linestage to have some reserve for recordings with low levels and does not have too much gain so that the volume control will have a sensible usable range. It's plate resistance is a low 1780 Ohms. With a 3:1 step down transformer this is reduced to 200 Ohms. Perfect to drive an iductive volume control and to make the linestage immune against difficult loads like long cables to power amps or even passive line level crossovers. 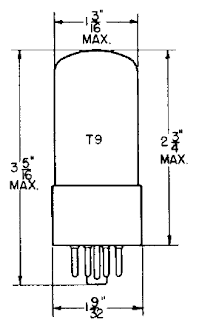 The 6AH4 is only available in the GT form, which stands for glass tube, hence the complete designation of the tube is 6AH4GT. With it's maximum allowed plate dissipation of 7.5W it is actually a small power triode. It would deliver about 1.5W in single ended mode. But I have never tried that. It's power and high plate voltage rating would also make it very usable as driver for large output tubes like 300B or 211. It could even deliver enough voltage swing to drive a 845. Again I have not tried it as a driver yet, but definitely will in some future project. For all technical details see the datasheet. All the mentioned technical parameters make this tube perfect for any case where more drive capability at a lower gain and much lower output impedance is needed as the widely used 6SN7 offers. That's also why I replaced the 6SN7 when redesigning the Octal preamplifier to the Mk2 version. Another important factor is the linearity of the tube if it's meant to be used without negative feedback. These are the plate curves as shown in the datasheet: 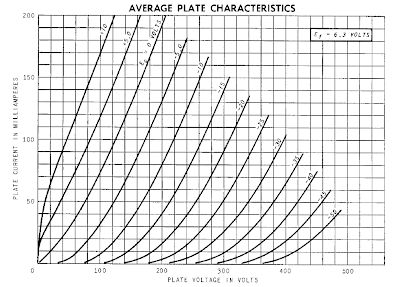 How does that compare to the actual curves taken from a real tube? See the screenshot of the curves below. 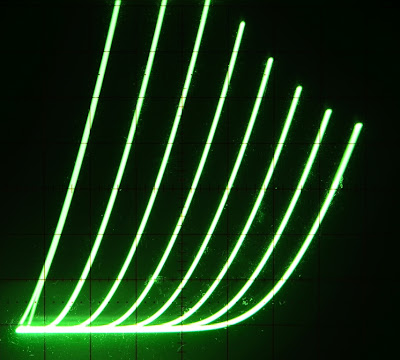 The 6AH4GT was offered under all the major brands like GE, RCA, Sylvania and many others:

The tubes from the different manufacturers have quite different construction details and sizes: 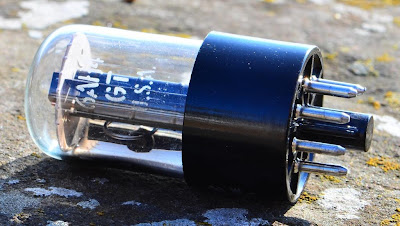 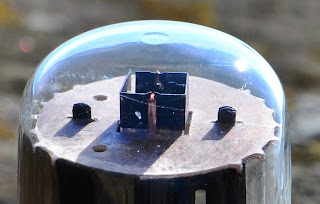 This tube has a short glass bottle and a rather large base. The getter is placed on the side of the glass. The photo on the right shows a close up of the top of the General Electric 6AH4. The small fins attached to the rods which extend through the mica are cooling fins for the grid. The tube was designed to work as vertical deflection amplifier in TV sets which requires a very sturdy tube. Other brands come with a rather long glass tube and have the entire upper dome covered with getter like this sample from the Zenith brand: 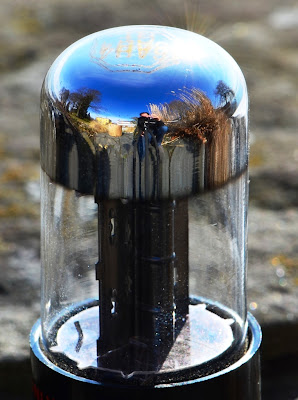 This has a nice large getter which makes a perfect mirror: 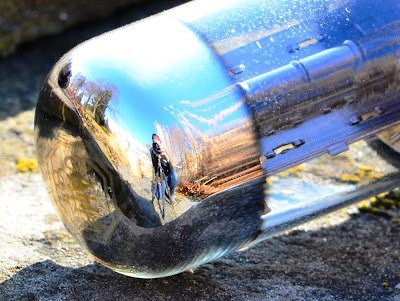 The next photo shows a RCA 'short bottle' 6AH4 in operation in the Octal preamplifier: 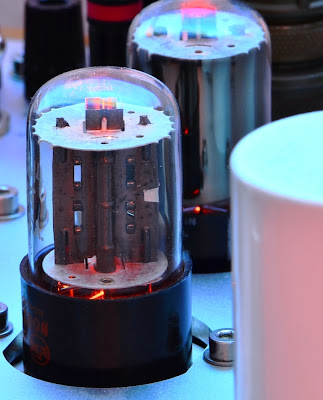 Two shots of a Sylvania 6AH4 powerd up showing the glow of the heater: 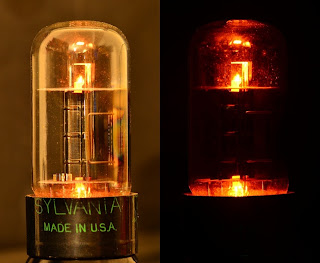 A close up which pictures the hot heater extending out of the cathode which glows red: 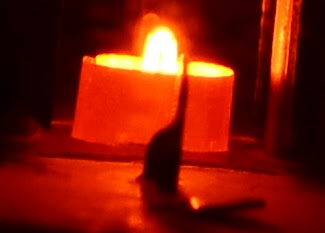 Although the tube comes in many shapes, I have no particular preference. As long as the tubes measure good they are all very well usable and sound differences are more a matter of taste. 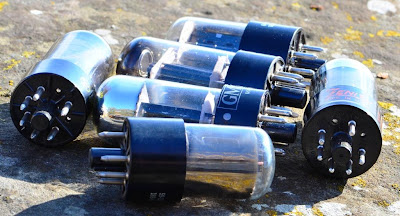 A stand alone linestage with the 6AH4 is already in the making. I showed some parts of it in one of the recent articles about the modular preamplifier concept. Stay tuned for an update which will show the completed 6AH4 preamp. 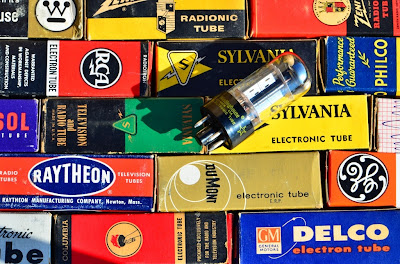 Email ThisBlogThis!Share to TwitterShare to FacebookShare to Pinterest
Labels: 6AH4, Tube of the month