I have been working on a complete amplification  chain containing phono stage, line stage and mono amps during most of the last month. They will all share the same chassis style as my 10Y line stage. Each with external PSU, so 8 chassis total. I will show all of them in dedicated posts. This first post shows the current state of the D3a phono stage. 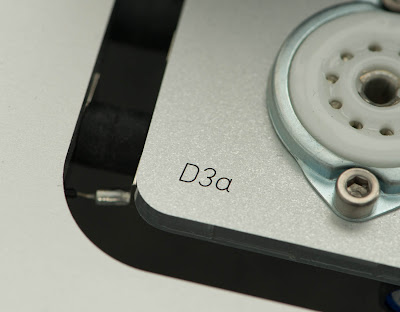 I already announced this phono stage in the D3a Tube of the Month article. The circuit topology is described there. The reason for the choice of the D3a is the higher amplification this tube can yield in an LCR phono stage compared to an E55L for example. The person who will use these electronics has a very low output cartridge. So every bit of gain is needed.

As already shown in previous posts about preamps, each socket is mounted on a small sub plate which is vibration damped through rubber pieces. Here a top view of the main mounting plate which will later be exposed on the top of the chassis: 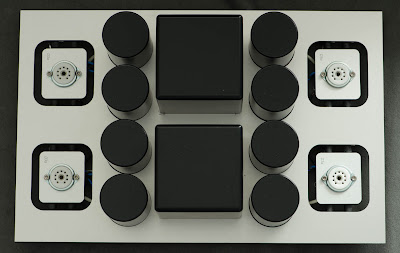 The underside of the plate showing the signal and heater wiring: 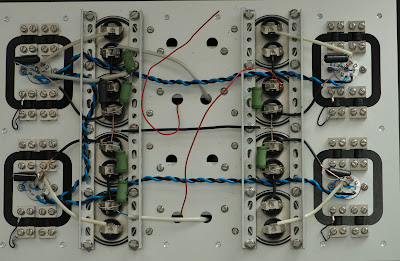 Two of the 4 B+ decoupling chokes used in the circuit are hidden under the two black covers in the middle. The remaining chokes and transformers will be placed inside the chassis: 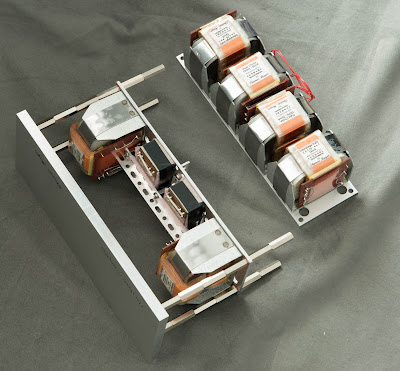 Both stages of the circuit use Lundahl LL1692A transformers. The 600 Ohm LCR RIAA is built discretely, using intactaudio RIAA coils:

The reason for the use of discrete LCR networks was the wish for the inclusion of the Neumann time constant. The second half of the network got modified such that the attenuation of the high frequencies stops around 50kHz.

Another requirement was the use of XLR in and outputs wired in parallel with RCA connectors: 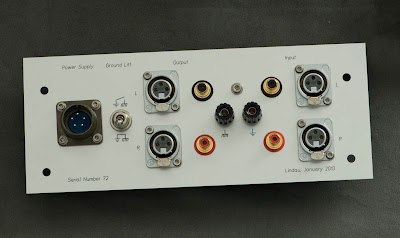 The backside also carries separate binding posts for signal ground and chassis, the power supply connector and a ground lift switch. The back plate is prewired as far as possible before it is mounted to the preamp: 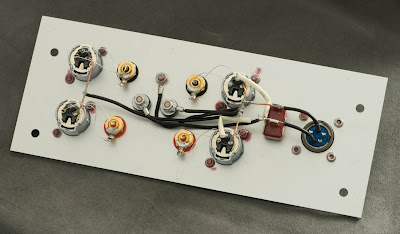 The PSU is constructed in a similar style, the top plate: 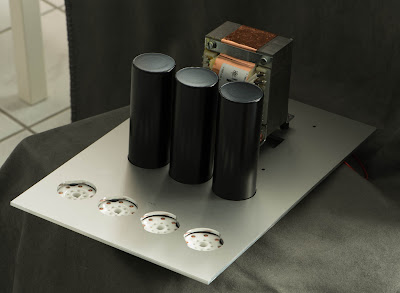 The power transformer will late be hidden under a black cover. The wiring underneath: 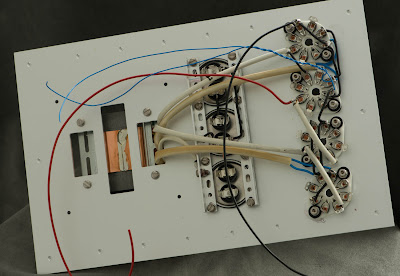 The separate power transformer for the heater supply and the B+ smoothing chokes will be placed inside the chassis on sub modules:

The front and backside panels of the PSU: 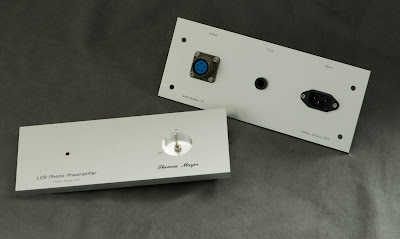 Now only the wooden chassis are missing. As soon as these arrive, the phono stage will be completed. This will be covered in part 2.

Thomas
Posted by VinylSavor at 14:41