I am not really a big fan of remote controls. I prefer to physically interact with the audio gear in the same way as I prefer the interaction with vinyl as a medium over digital formats. Whenever someone asked for a remote controlled preamplifier I refused to do it usually with a little joke that the exercise of getting out of the chair to change volume is rather healthy. But then came this nice chap who already has a 10Y/45 power amplifier and convinced me that remote control for the volume is essential for him. It would have been a shame if that 10Y/45 amp would continue to be driven from a different preamp. So here it is, my first remote controllable line preamplifier. 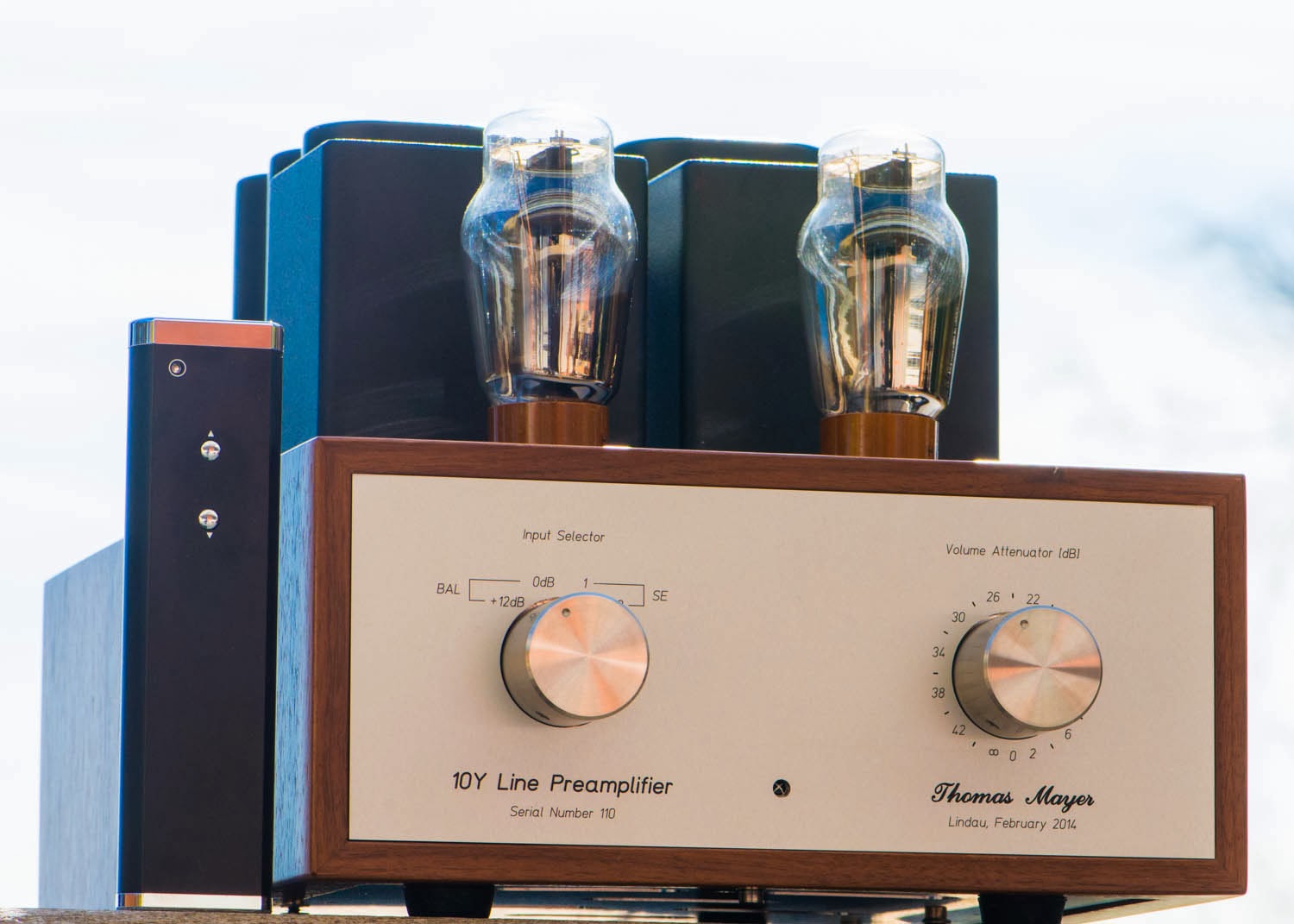 The circuit, parts and design are the same as those of earlier implementation of the 10Y preamp. The line stage can be equipped either with a 10Y (10, UX210, VT25, VT25A) or the slightly uprated transmitting tube 801A (801, VT62) which will be covered in a future Tube of the Month article. Volume control is done with a Tribute line output transformer which has a tapped secondary.

So how to implement the remote control? A solution would have been a PCB with a bunch of relays which are then controlled by the remote. But the preamp should still have that classic old school look and feel. Which means a solid volume control switch which always indicates the volume setting rather than a digital LCD display. Although my professional background is in digital microelectronics I chose rather not to reinvent the wheel but use an existing solution. Bent Audio offers a remote controlled stepper motor along with the IR receiver and a nicely made metal handset. So I emailed John Chapman of Bent Audio and ordered a set. John is a very nice guy who was very helpful to sort out some minor mechanical issues to combine the remote control system with an appropriate switch.

The motor is mounted on the back of the switch and turns it up or down as the remote control is used. The switch can also be turned manually. So the marker on the volume knob always indicates the volume setting. When the preamp is turned off and back on the volume is at the same setting as before without the need of any memory storing the value or special relays which hold their setting.

This is the motor mounted to the switch which has already the teflon insulated silver wires attached which will get soldered to the transformer volume control: 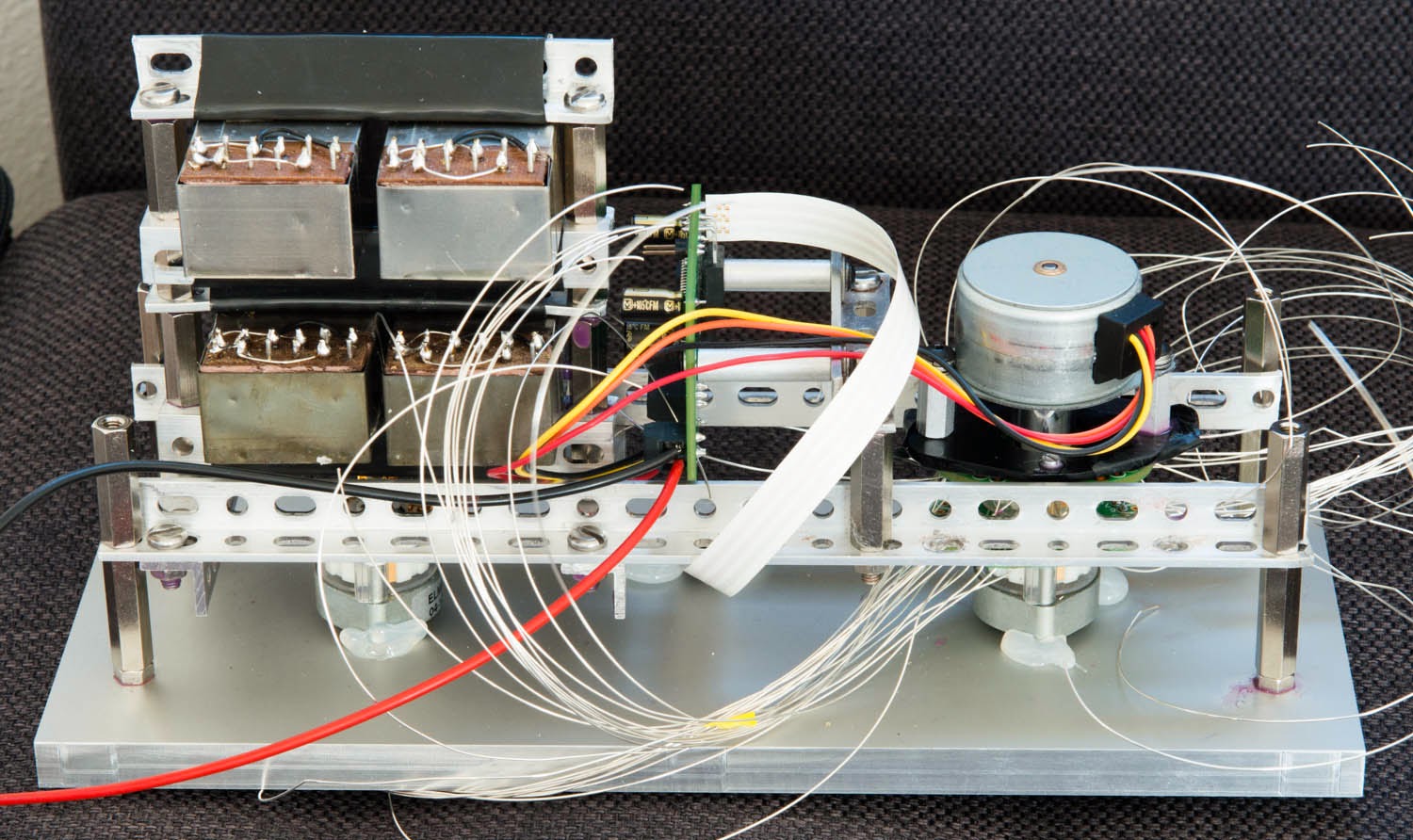 The stepper motor and it's control electronics only need a single supply between 9 and 12V. Quite convenient, but the motor needs to have considerable torque to rotate the switch. When in operation it consumes current peaks up to 1A. Although the digital control circuit goes to sleep mode and turns it's clocks off when not used, I didn't want to supply it from one of the filament supplies. So it got it's own independent supply with a separate power transformer. This power supply is placed in the external PSU chassis along with filament and high voltage supplies: 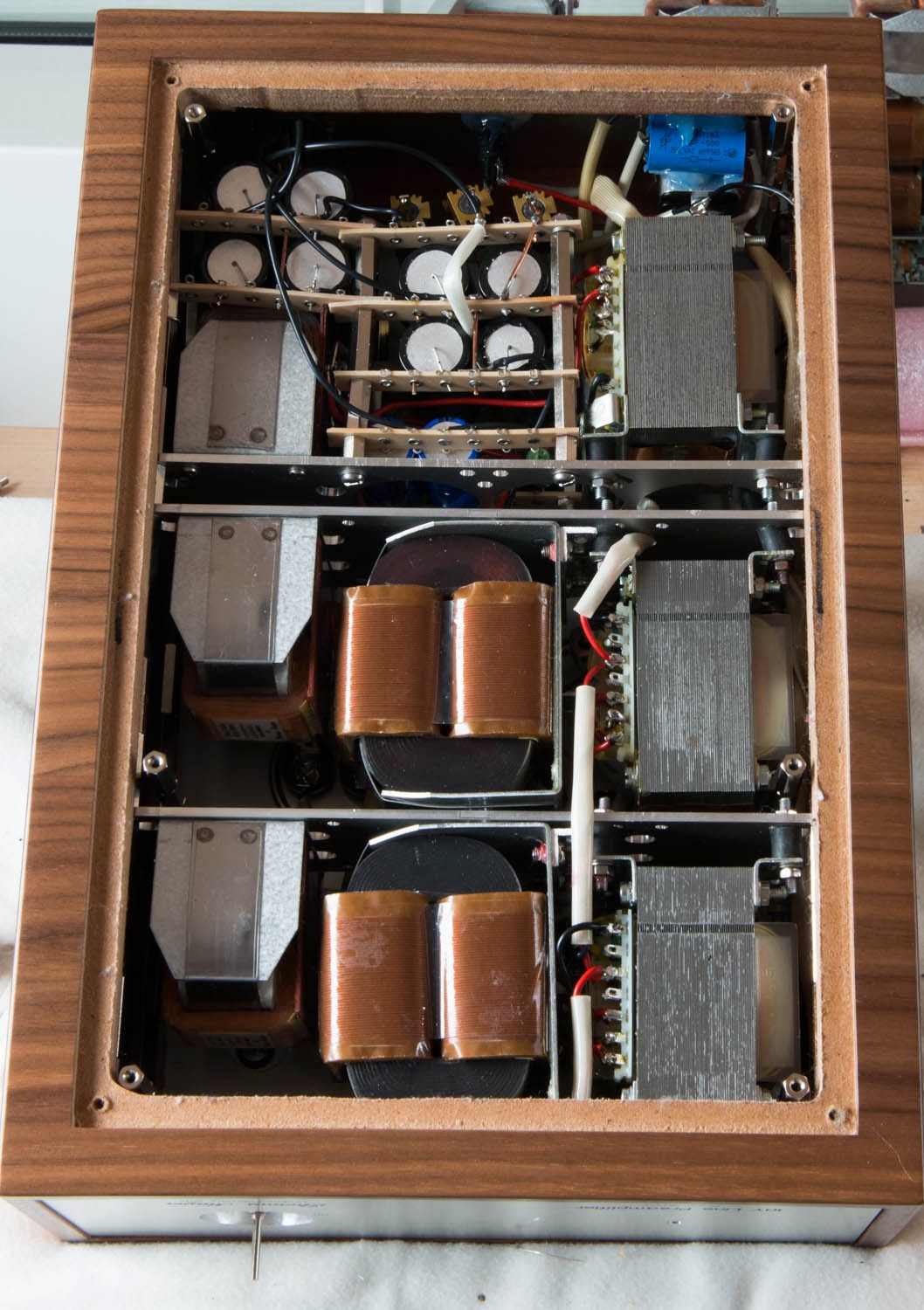 The remote control system PSU even got it's own smoothing choke.

The top plate of the signal section with all the signal wiring in place: 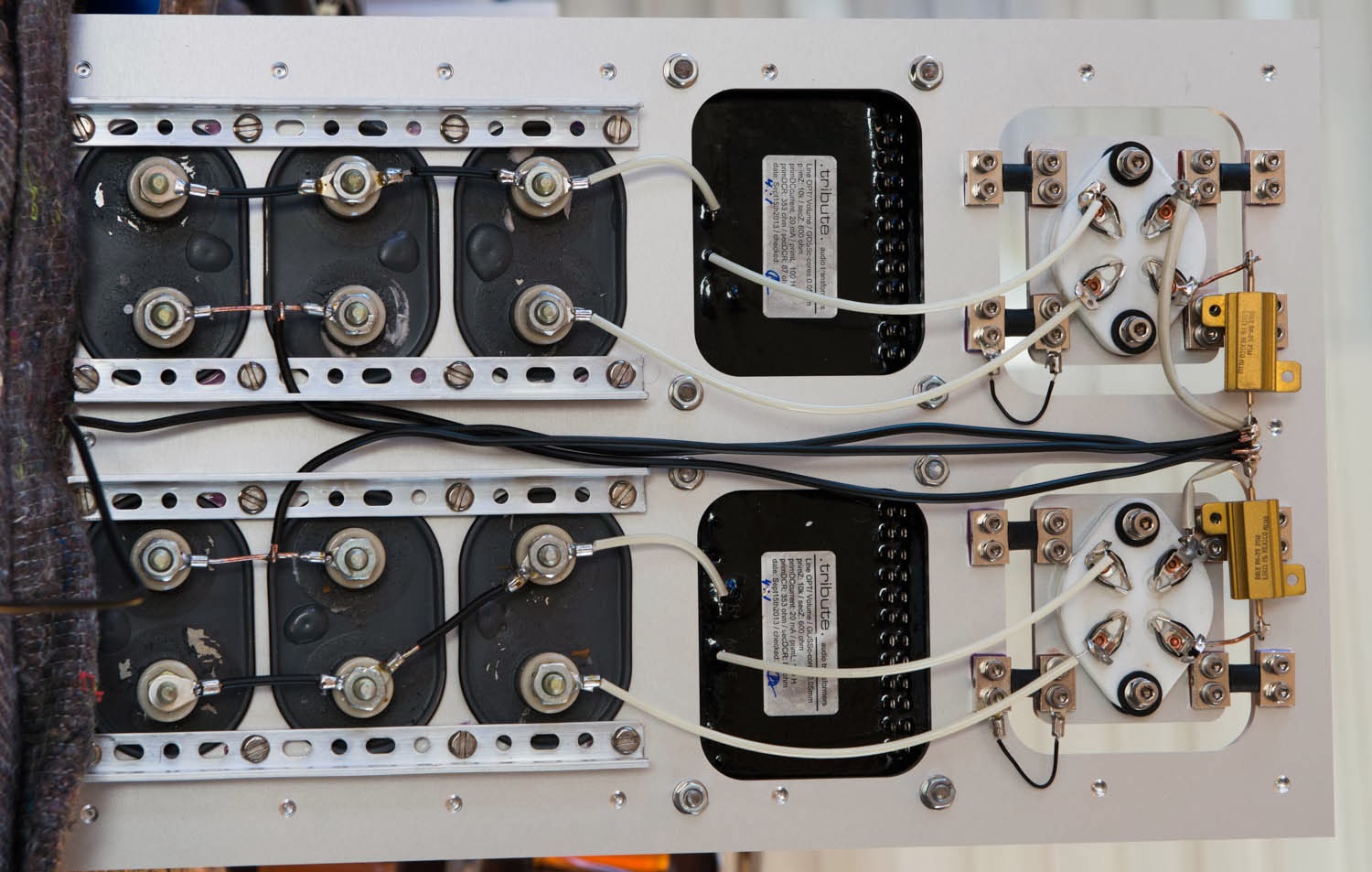 The inside of the completed signal unit: 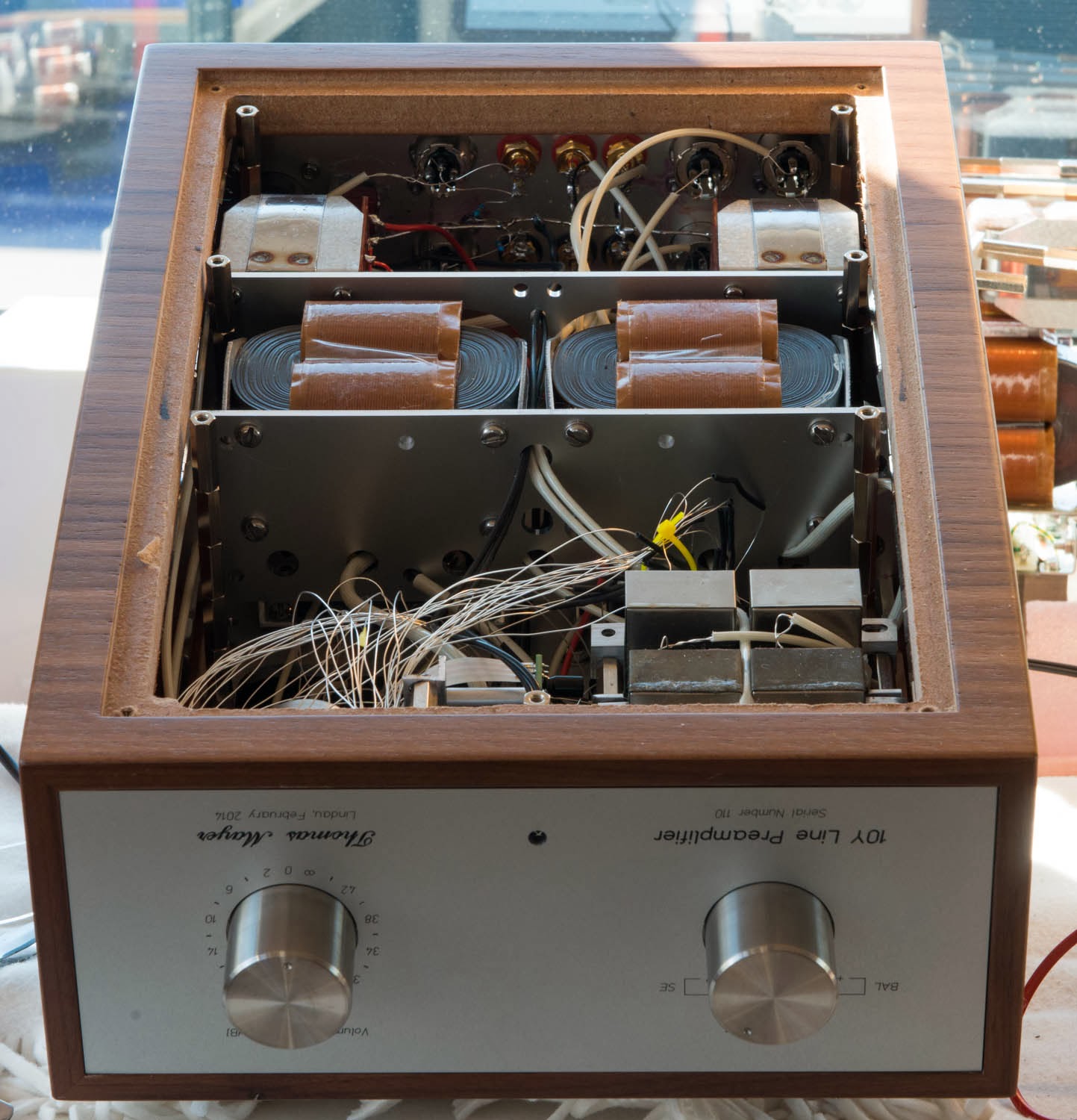 The completed preamp with power supply: 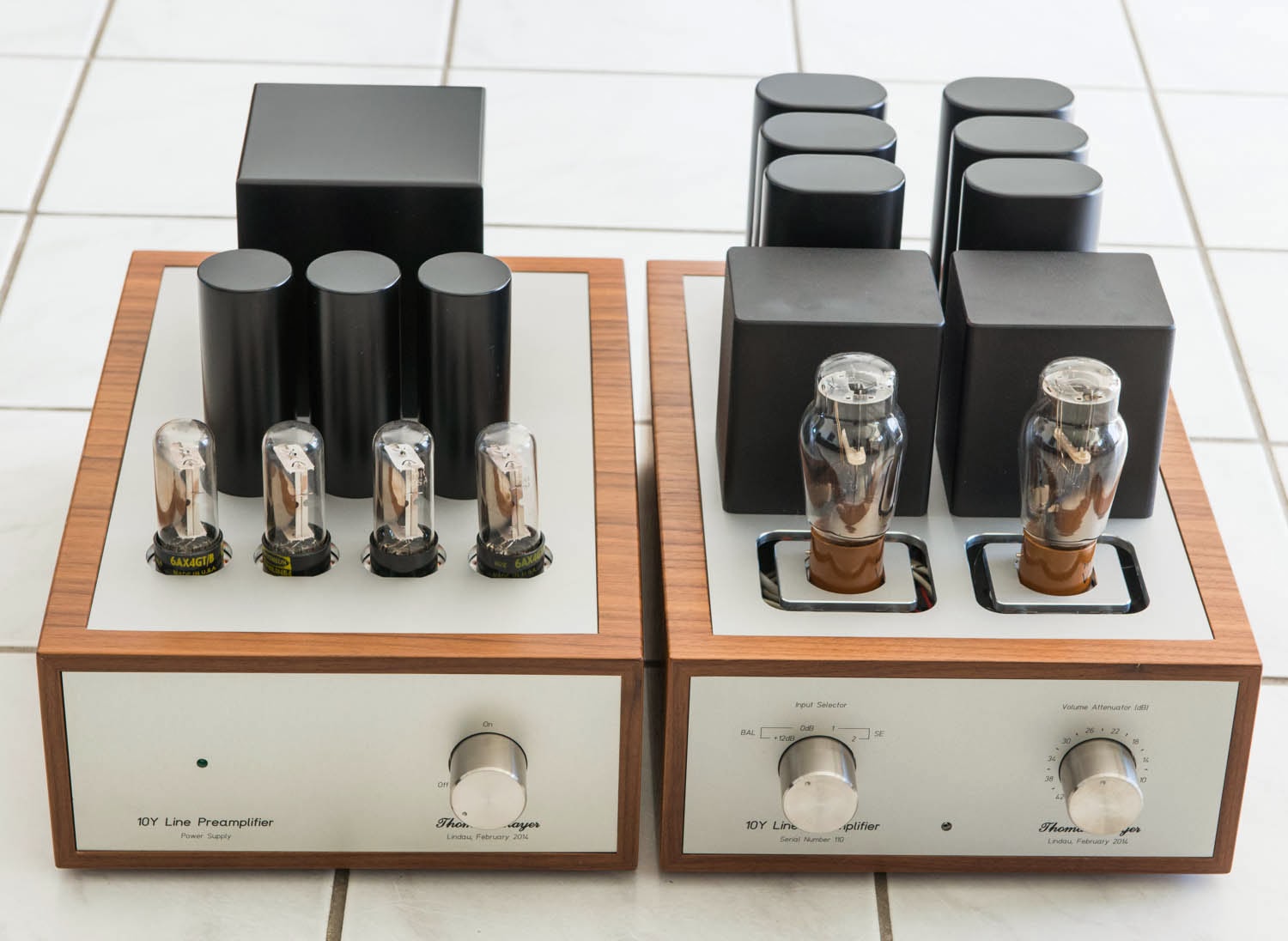 The two balanced inputs have separate sets of input transformers. One wired for 1:4 step up (+12dB) and one wired 1:1. In addition there are two regular single ended inputs.

The umbilical between PSU and preamp needs 9 separate wires for all the different supply voltage and safety earth. A 10 pin umbilical is used.


The preamp section from the top, with the remote control: 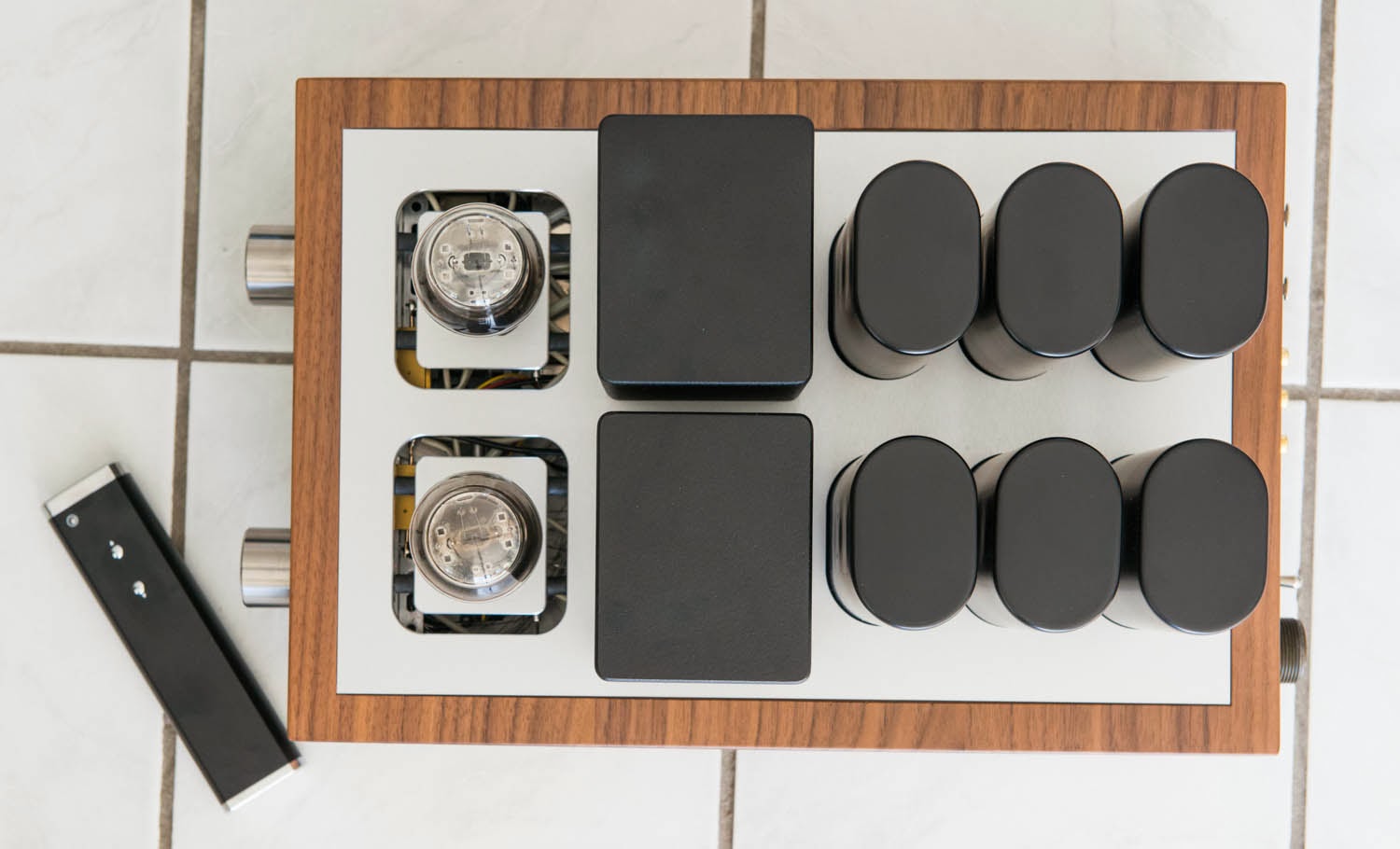 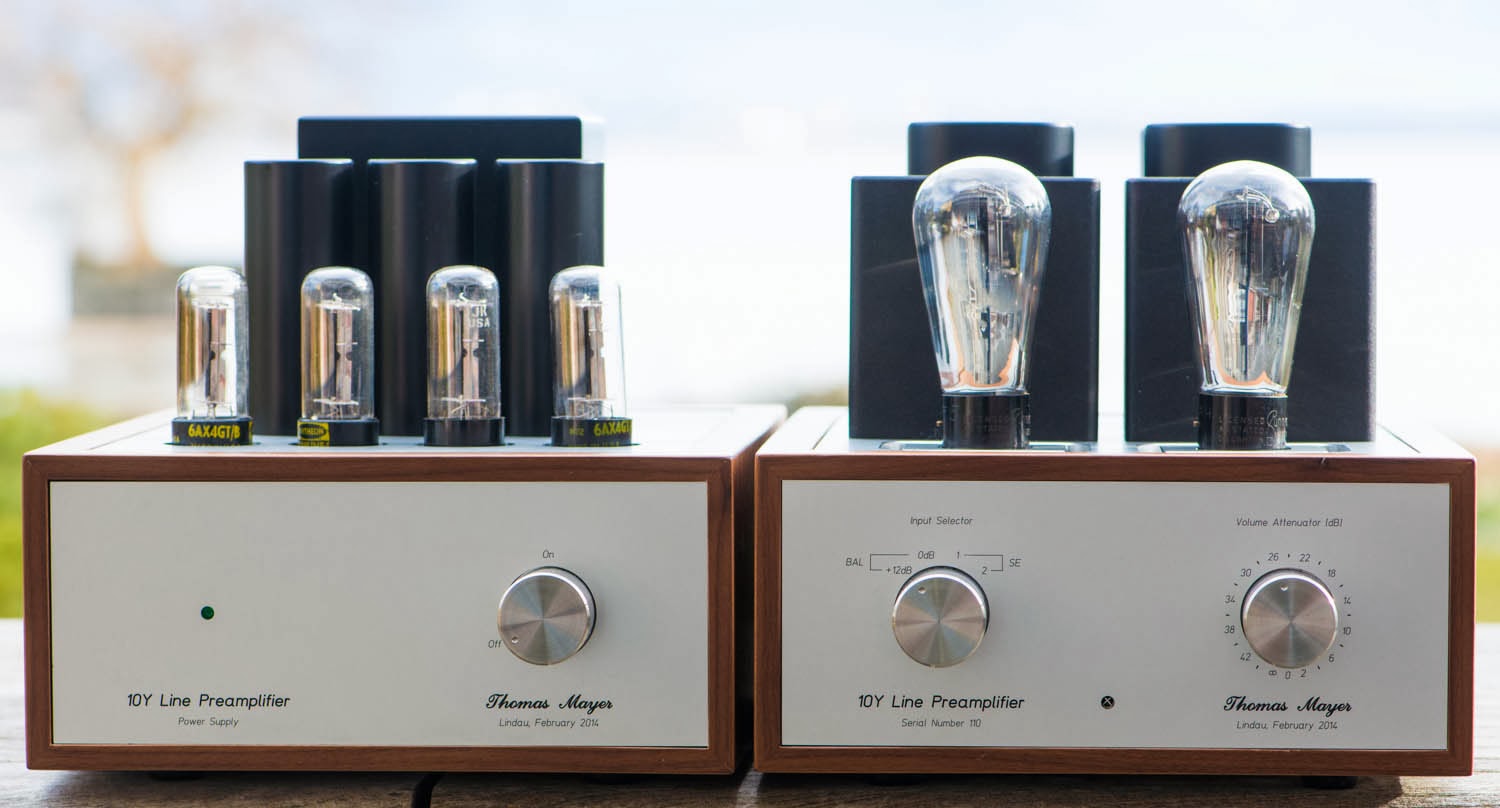 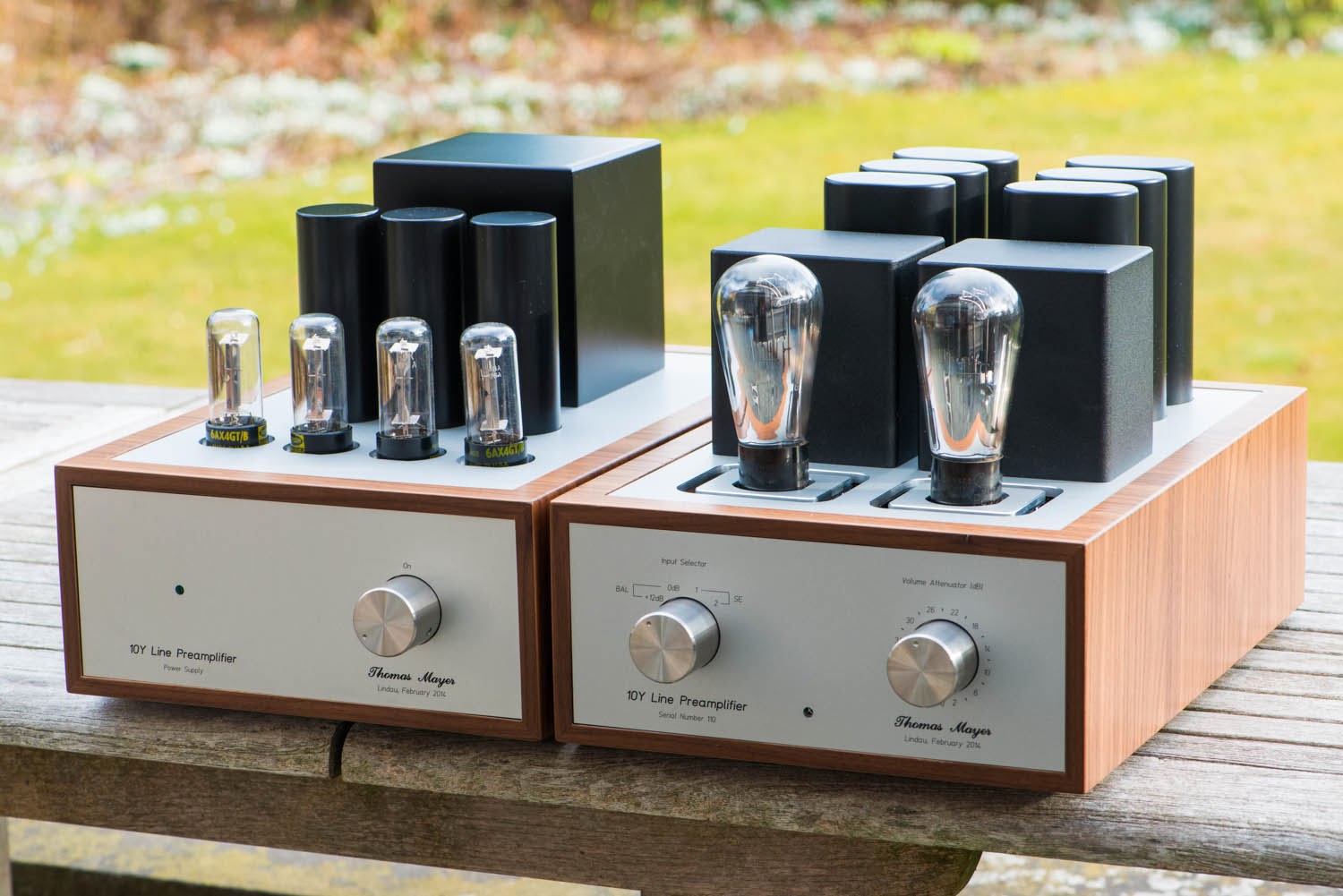 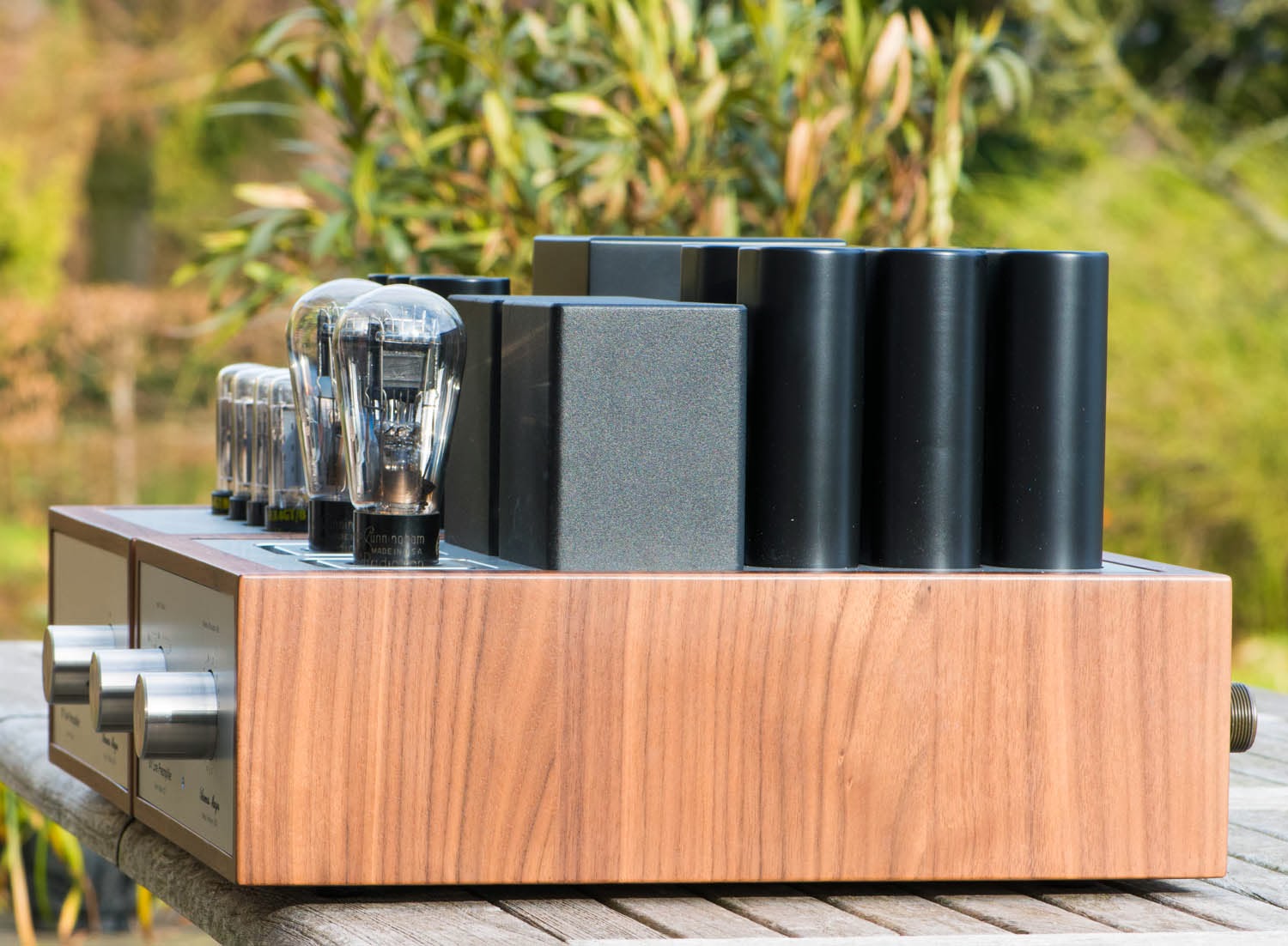 The globe in these photos are the magnificent 1602 triodes. A special low microphonics version of the 10Y. 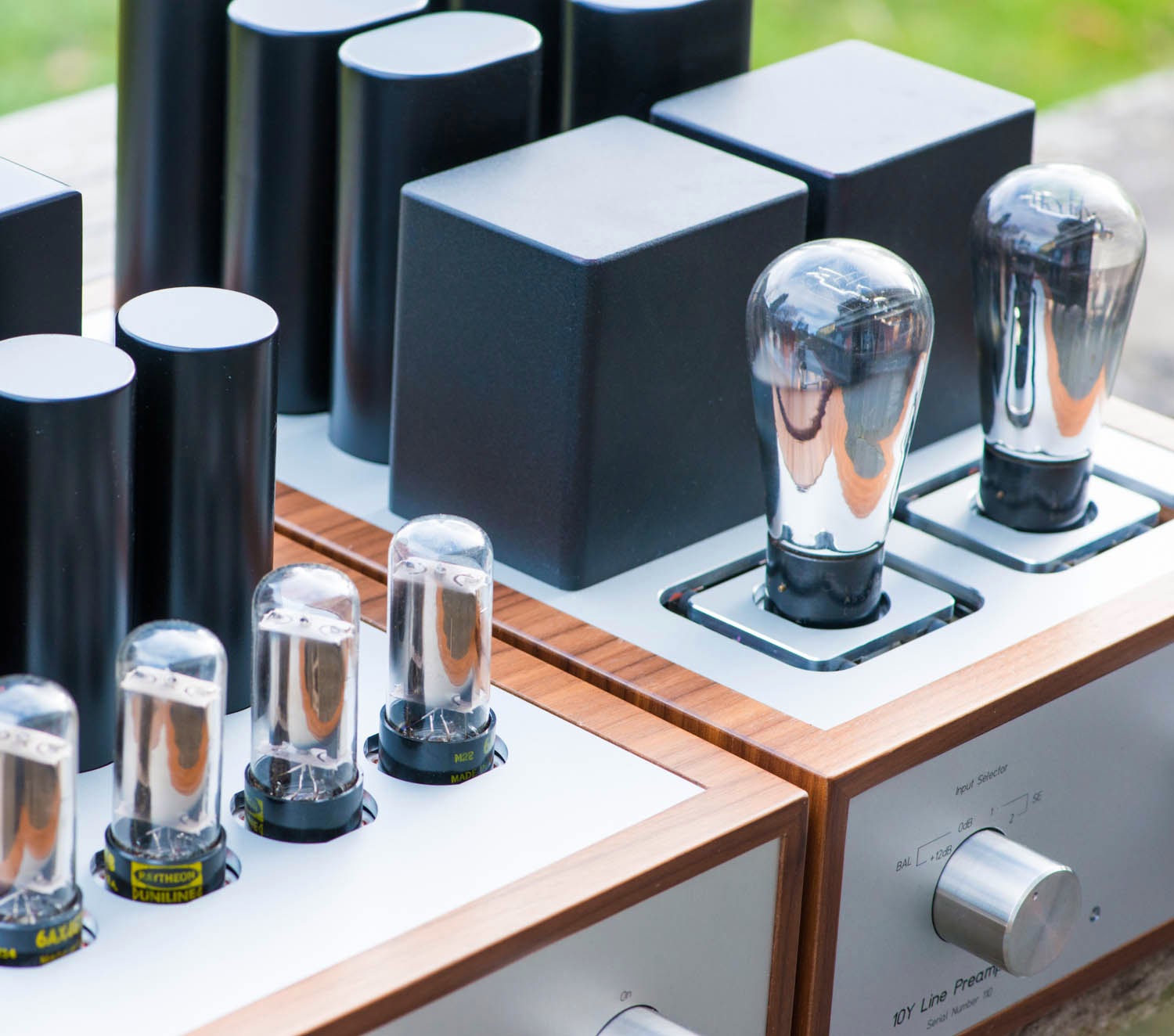 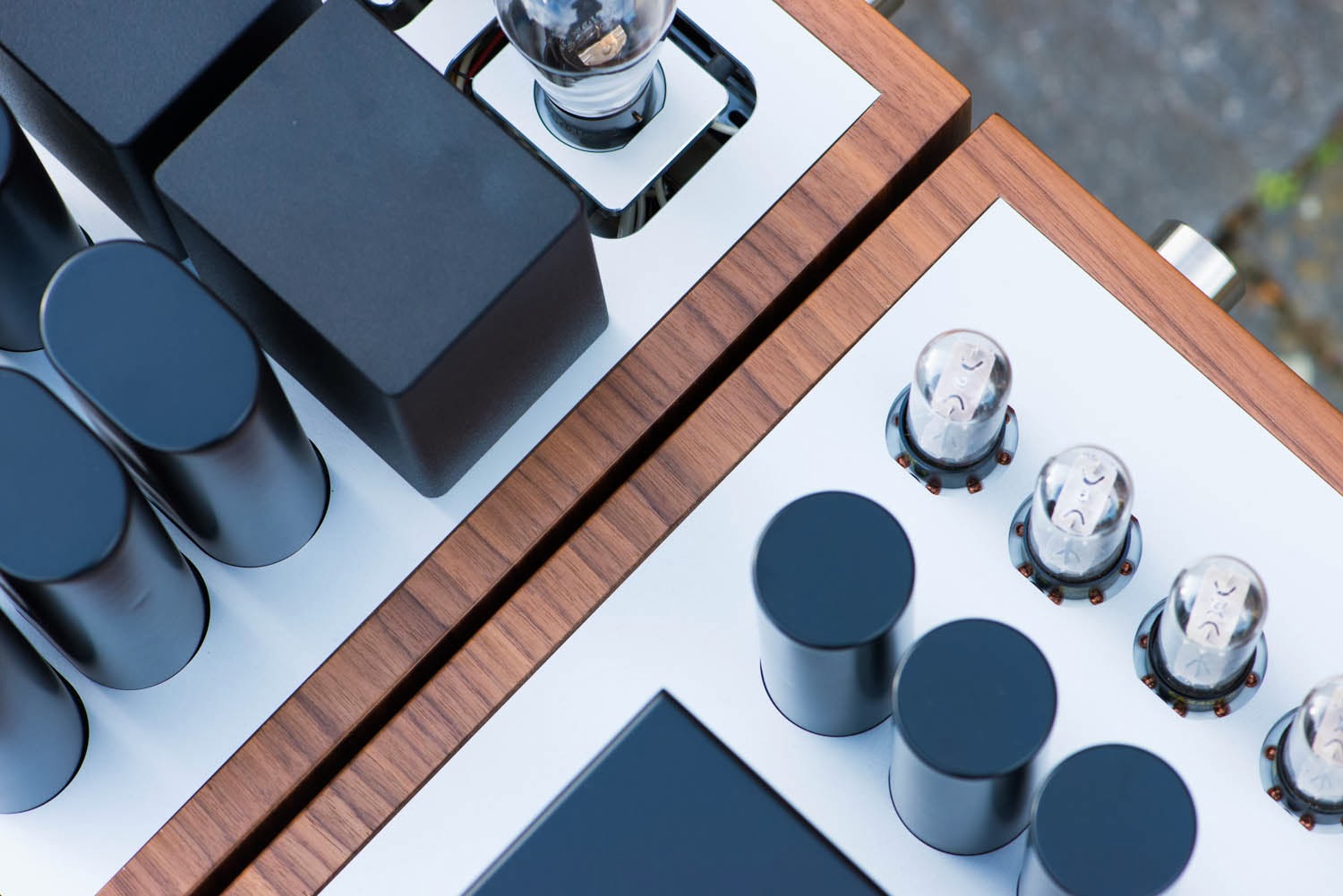 Email ThisBlogThis!Share to TwitterShare to FacebookShare to Pinterest
Labels: 10Y, 801A, Preamplifier