Due to my preference for TV Damper tubes like the 6AX4, classic rectifier tubes haven't received a lot of attention on my blog so far. Except for the 5X4 which was presented last year, none of those classic two diode rectifier tubes with 5V filaments/heaters have been covered. This doesn't mean that I don't consider them as useful. I'll give them some more attention in the future not only on the blog but also in actual projects. This months tube is a type many of you probably never heard of: The 83V. 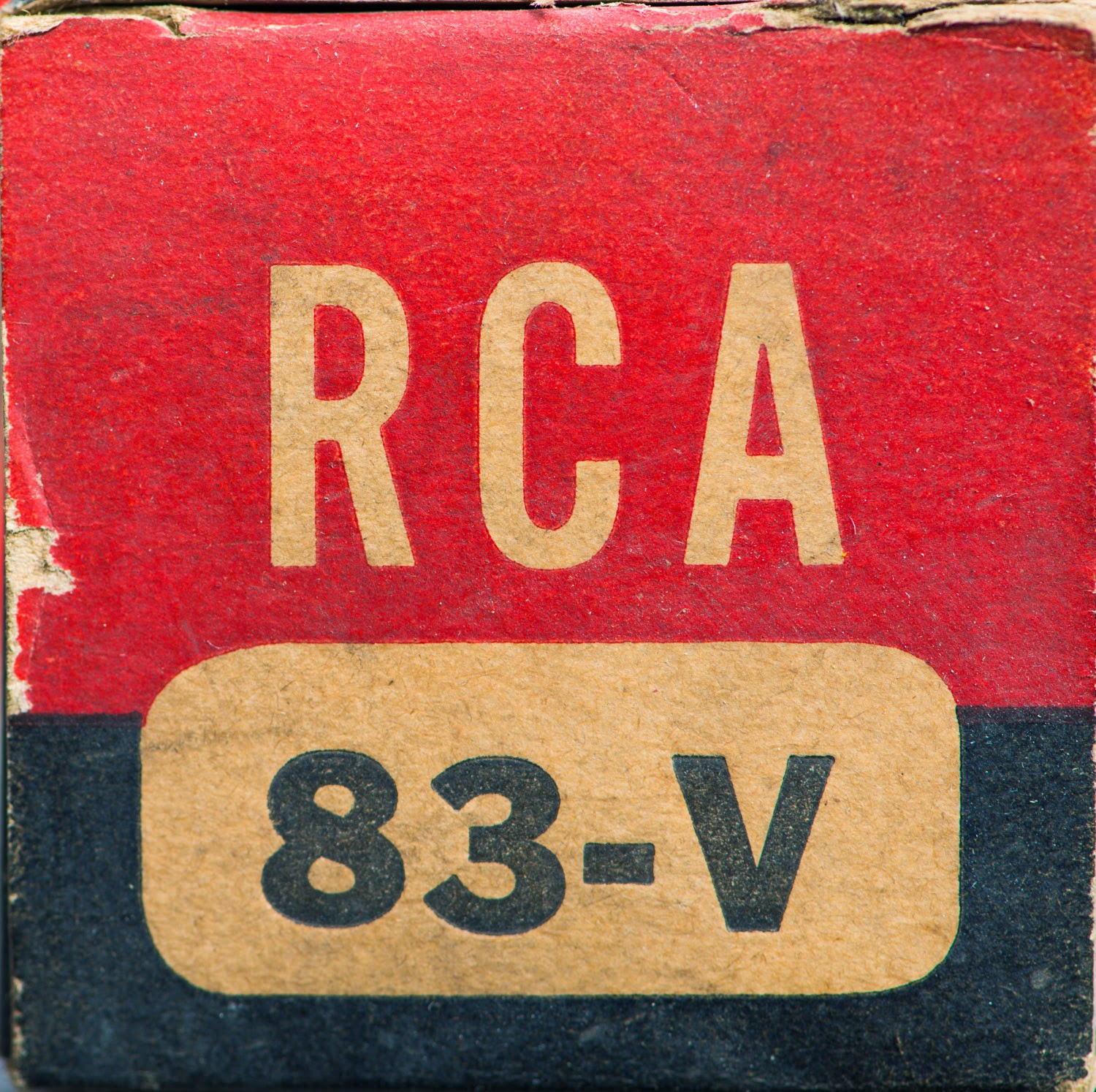 The 83V is not to be confused with the 83, a mercury vapour rectifier tube. As the appendix 'V' indicates, the 83V is a vacuum tube. It was introduced in 1934.  It was probably meant as an alternative to the 83 which avoids the hazards of a potential mercury spill in case a tube breaks. 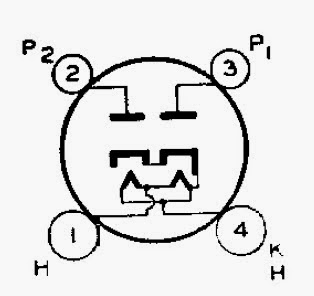 But the 83V cannot replace a 83 in every application since it has lower ratings. Both tubes have the UX4 base in common (pinout shown on the left). But that is where the similarities end already. While the 83 is directly heated, the 83V has an indirectly heated cathode. The cathode is connected to one end of the heater inside the tube to avoid the need for a fifth pin. Sometimes this is referred to as half indirectly heated. With the indirectly heated cathode, the 83V has a rather low internal voltage drop which mimics the mercury vapour tubes, the drop is not as constant but rises with current draw. While the 83 filament consumes a hefty 3A, the 83V only requires 2A. Peak inverse voltage is the same 1400V for both, but the vacuum variant has a lower current rating of 200mA max versus 250mA of the 83. A big advantage of the 83V is the slow voltage rise as the heater warms up. 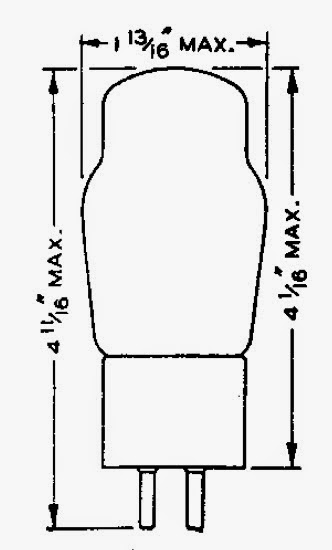 It also doesn't require a preheating procedure. Both types also differ in terms of size. The 83V has a ST14 bulb while the 83 comes in the larger ST16 glass. The 83V has the same size as a 45 which would make a good fit on a 45 amp. Current and voltage capabilities are more than adequate for a stereo SE 45 amplifier. That will probably be an application for which I might use the 83V in the future. also powering a stereo 2A3 amp would be possible, while the current rating would be too low for a Stereo 300B amp. A mono 300B would be possible however. While the 83V is quite different to the 83, it has a much closer equivalent, the 5V4 which is basically the same tube with an Octal base. Both of these will also be covered in some future Tube of the Month posts. Although this rectifier is quite capable for such a small bulb, it has not been used a lot in audio. Nowadays it seems to be forgotten among amplifier builders. Thus it is still available from tube dealers at reasonable prices, albeit not as cheap as TV dampers.

Let's have a look at the tube: 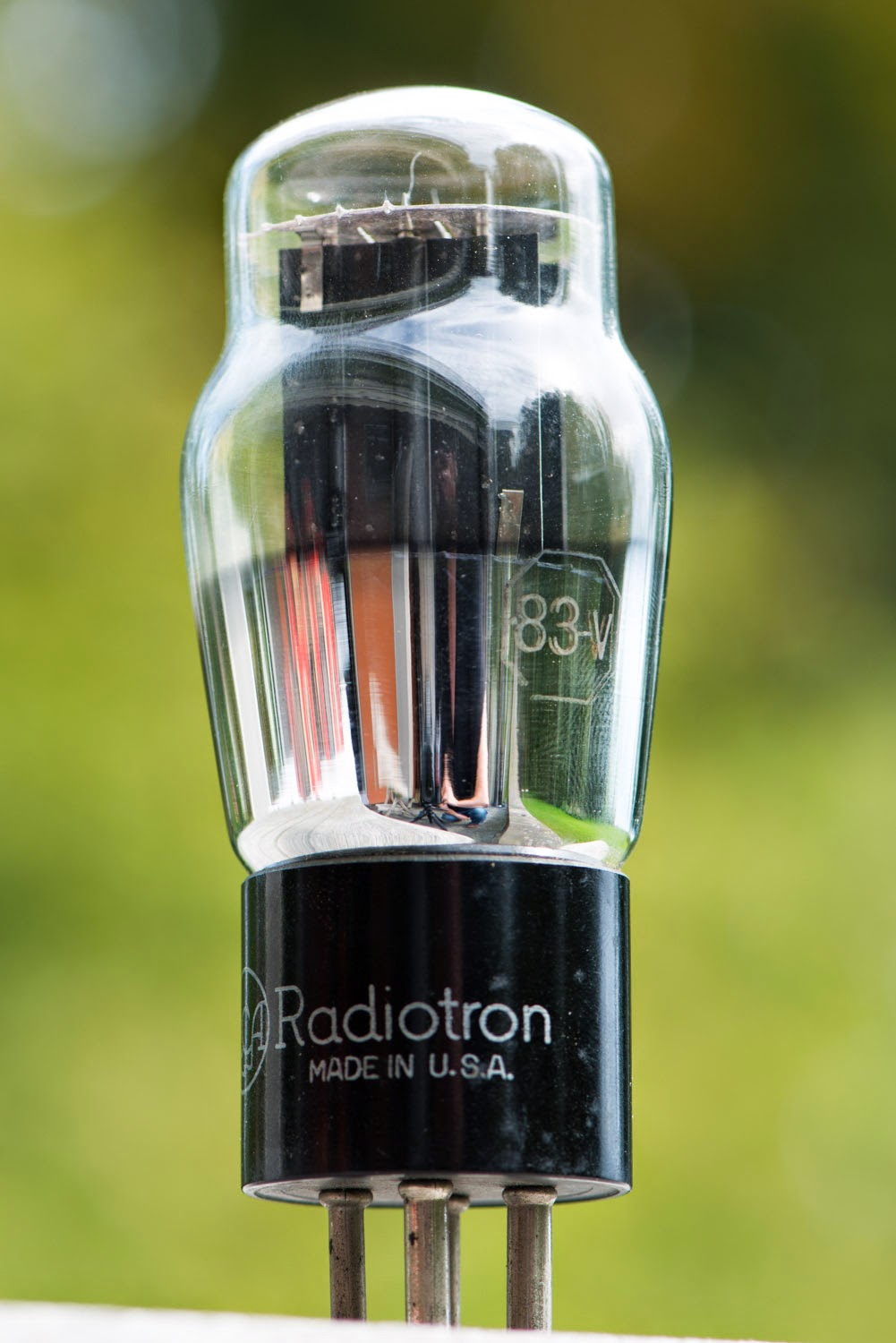 I only have RCA 83-v in my collection, so can't show any other brands. 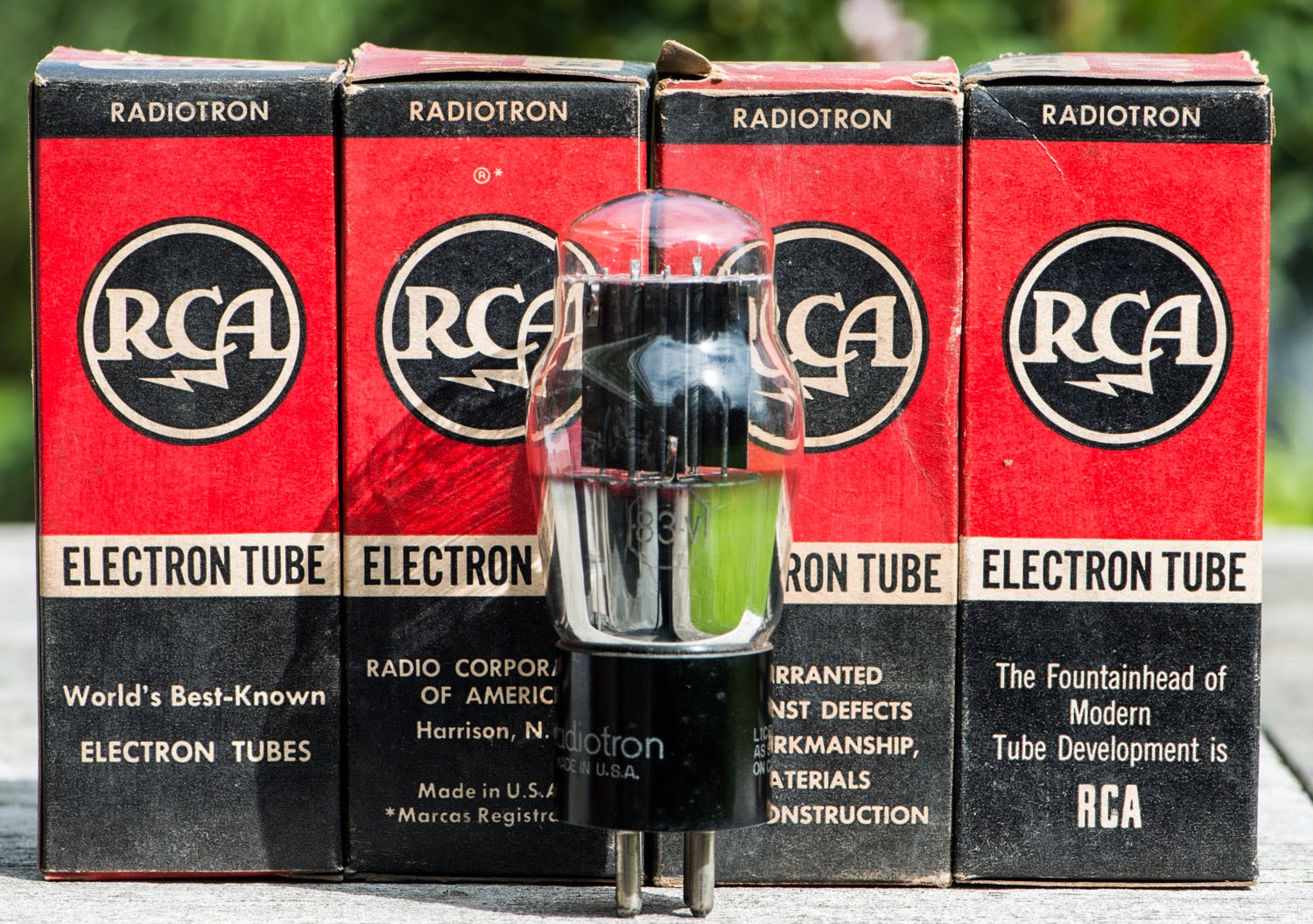 Views from the side showing the plate structures: 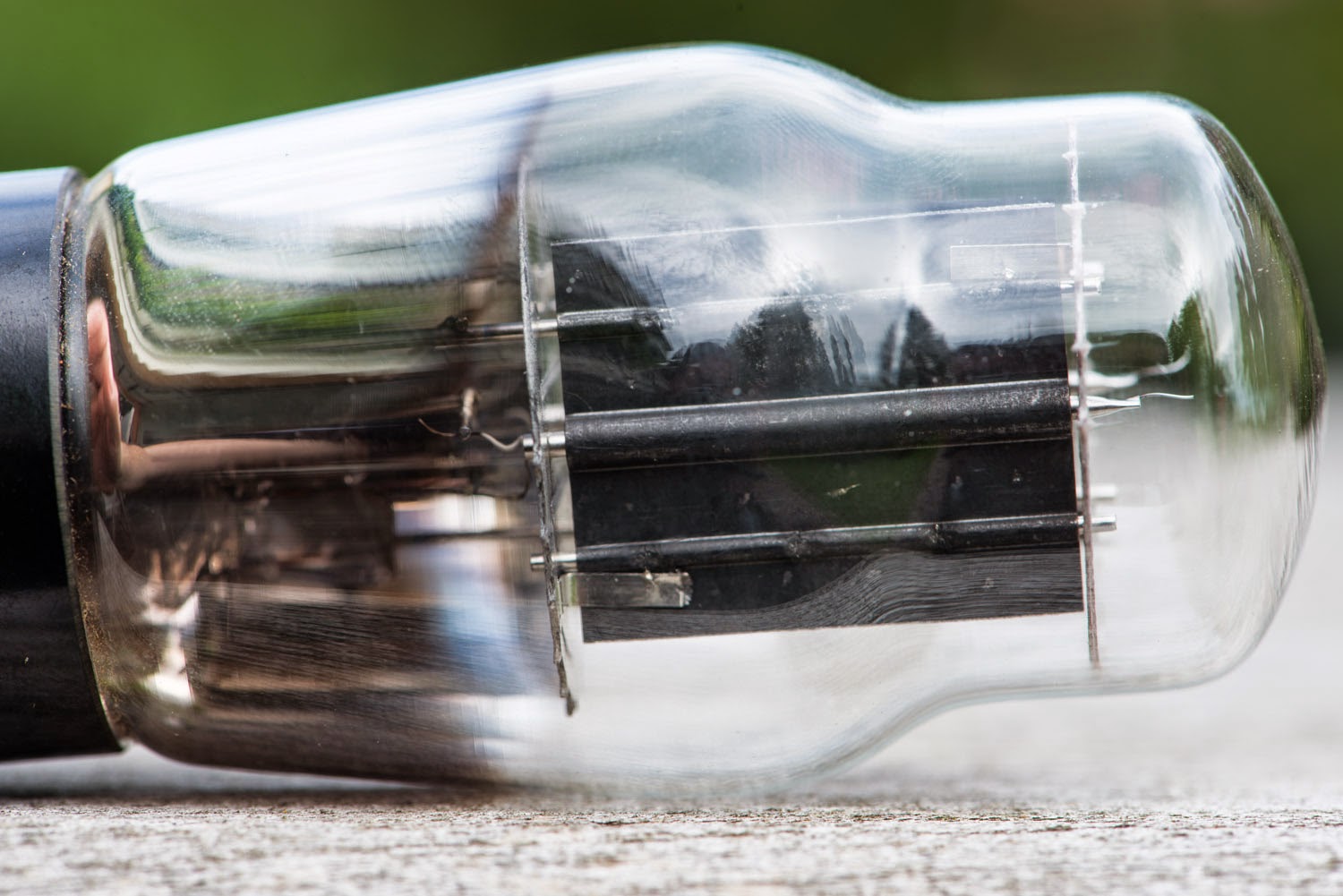 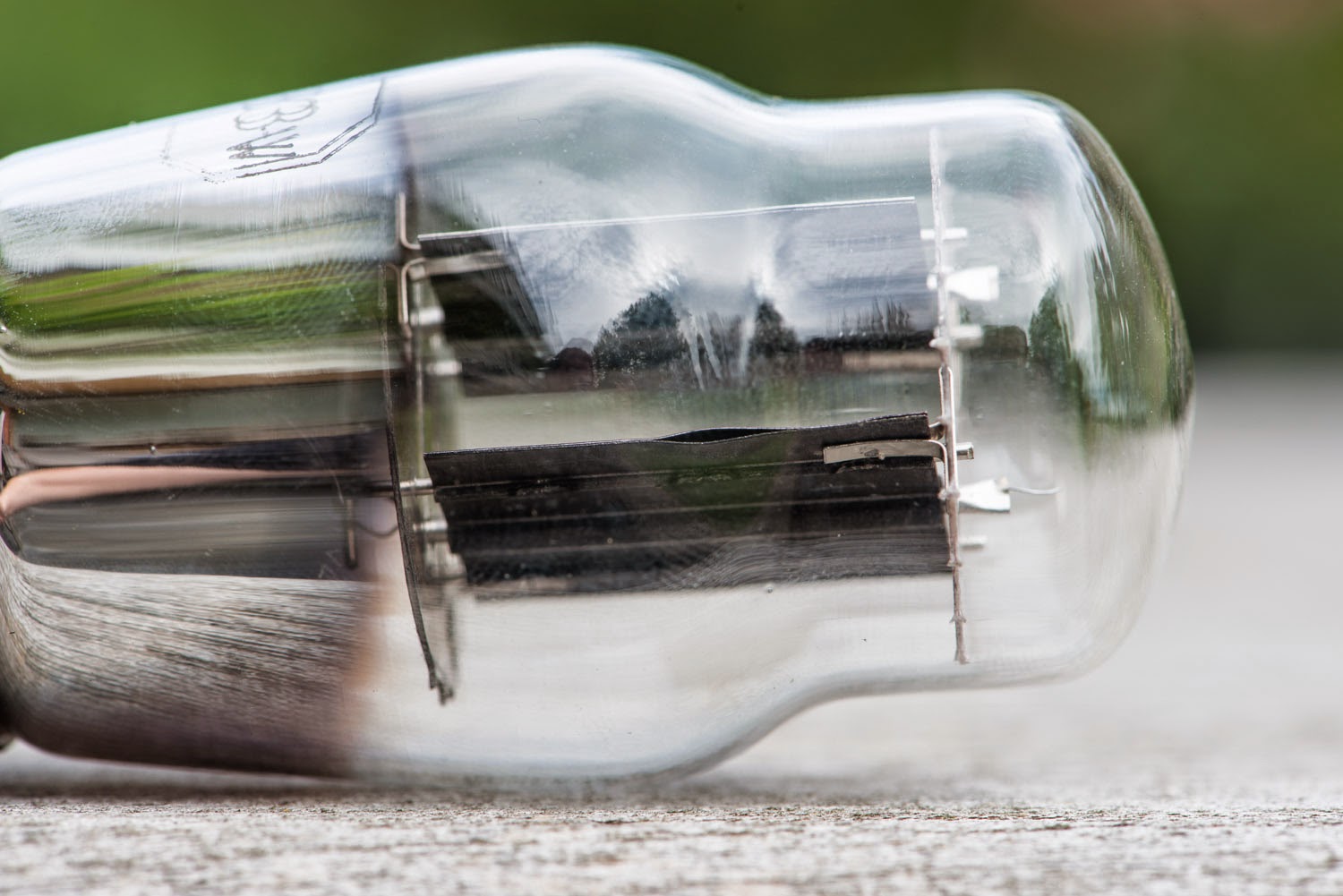 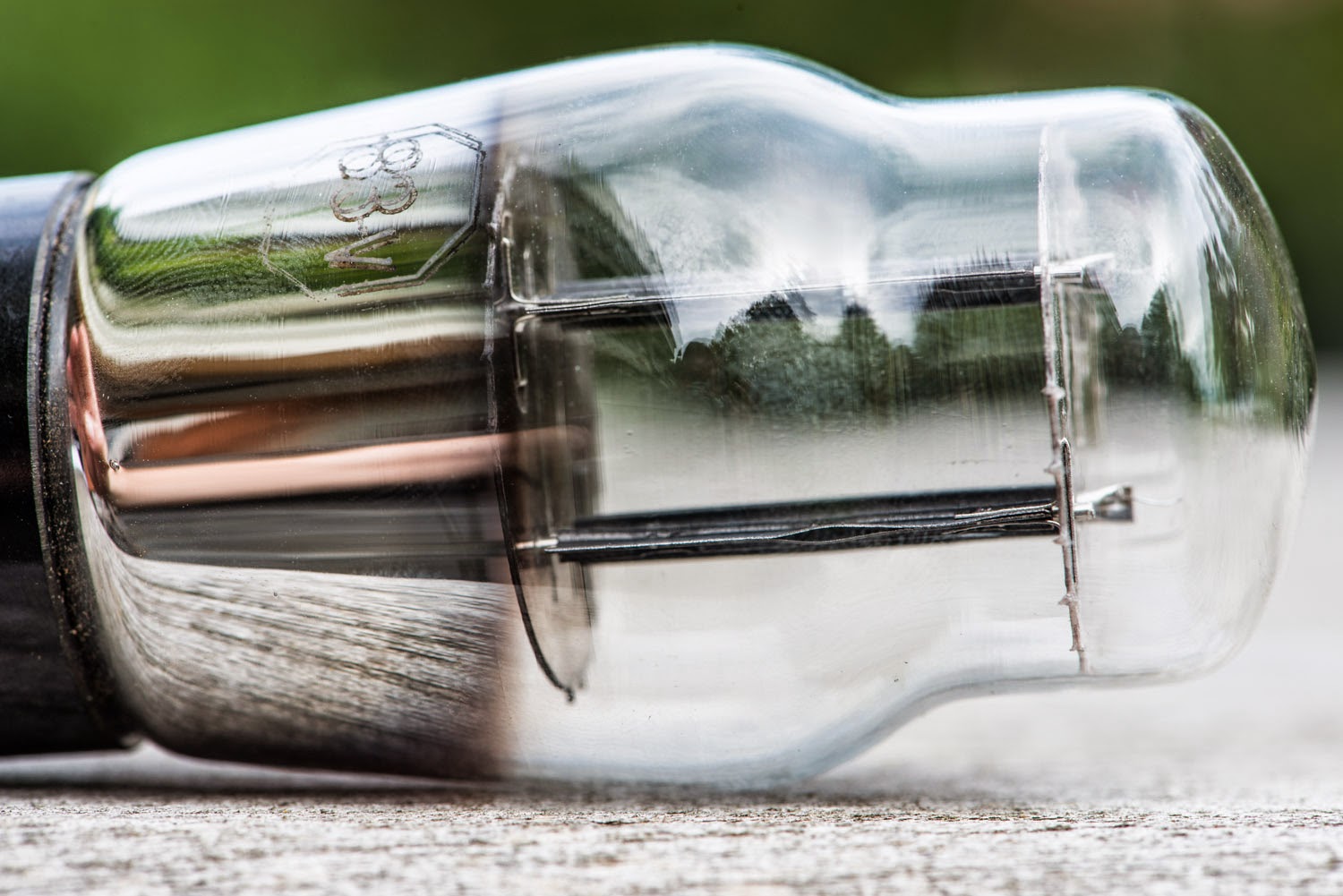 Detail at the bottom: 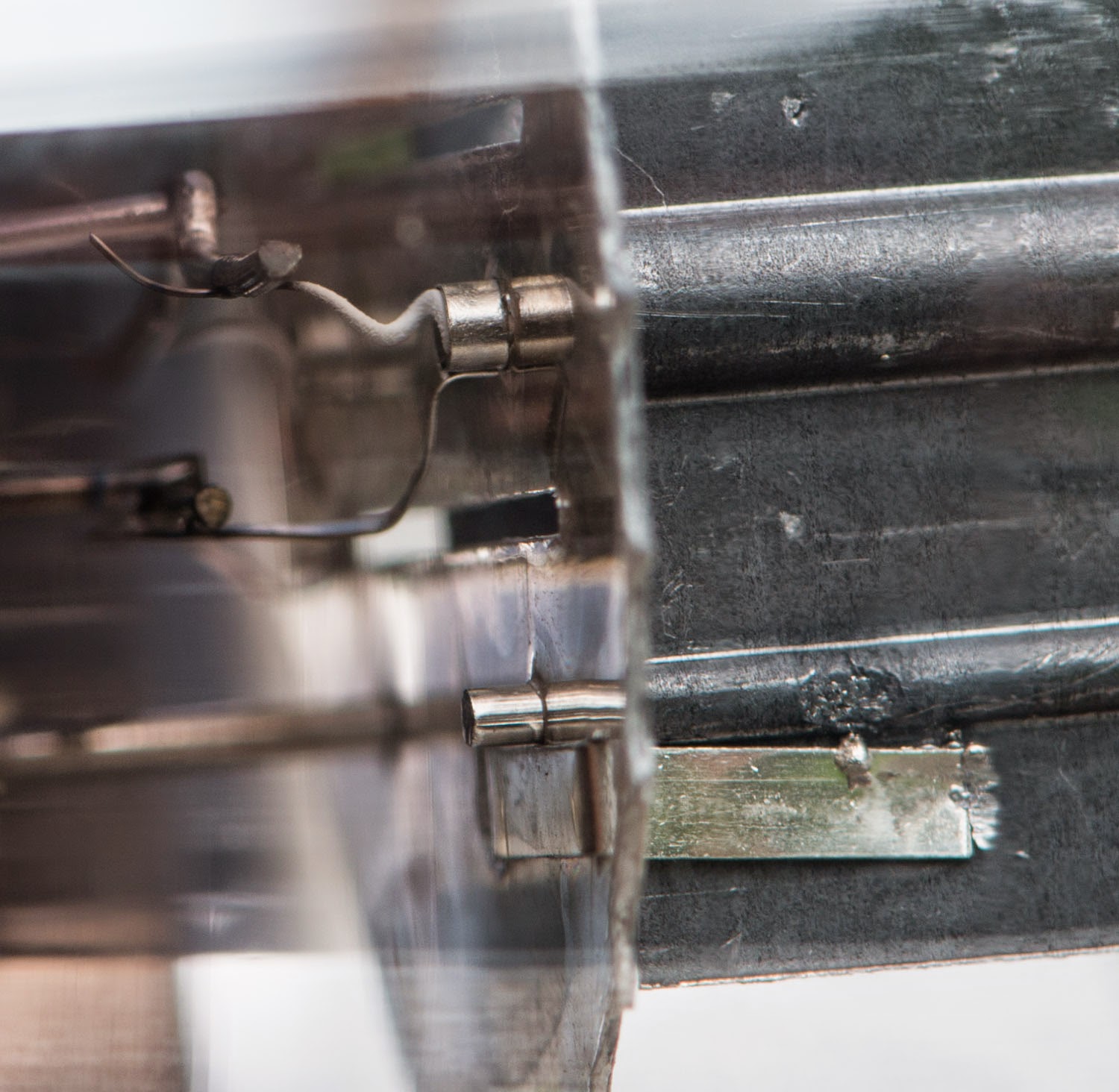 This shows the heater wire going into one of the two cathodes which are internally connected: 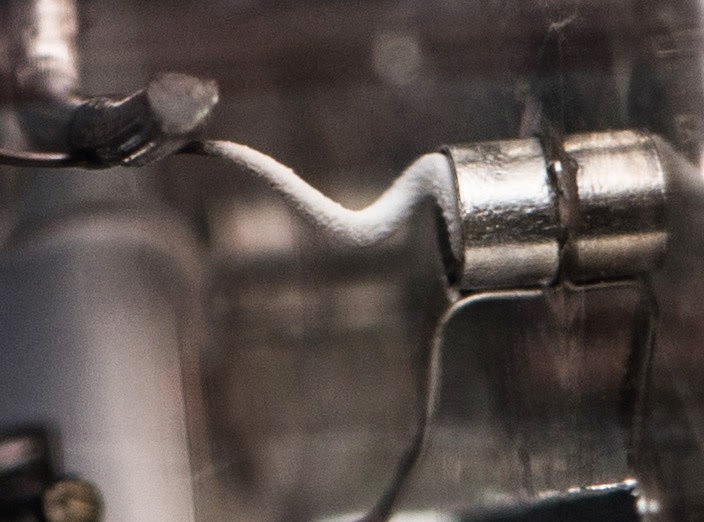 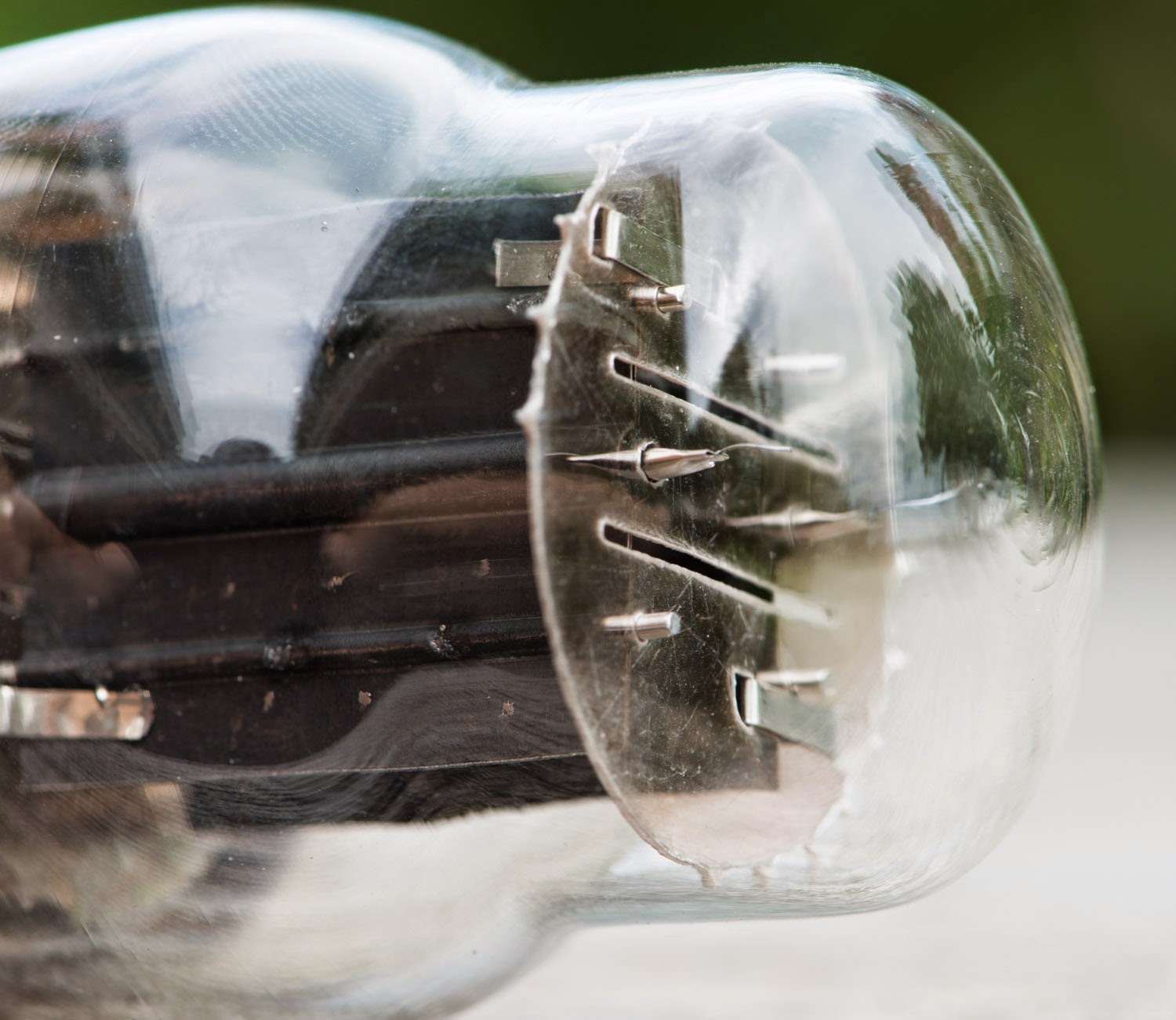 Close up to the upper end of a cathode: 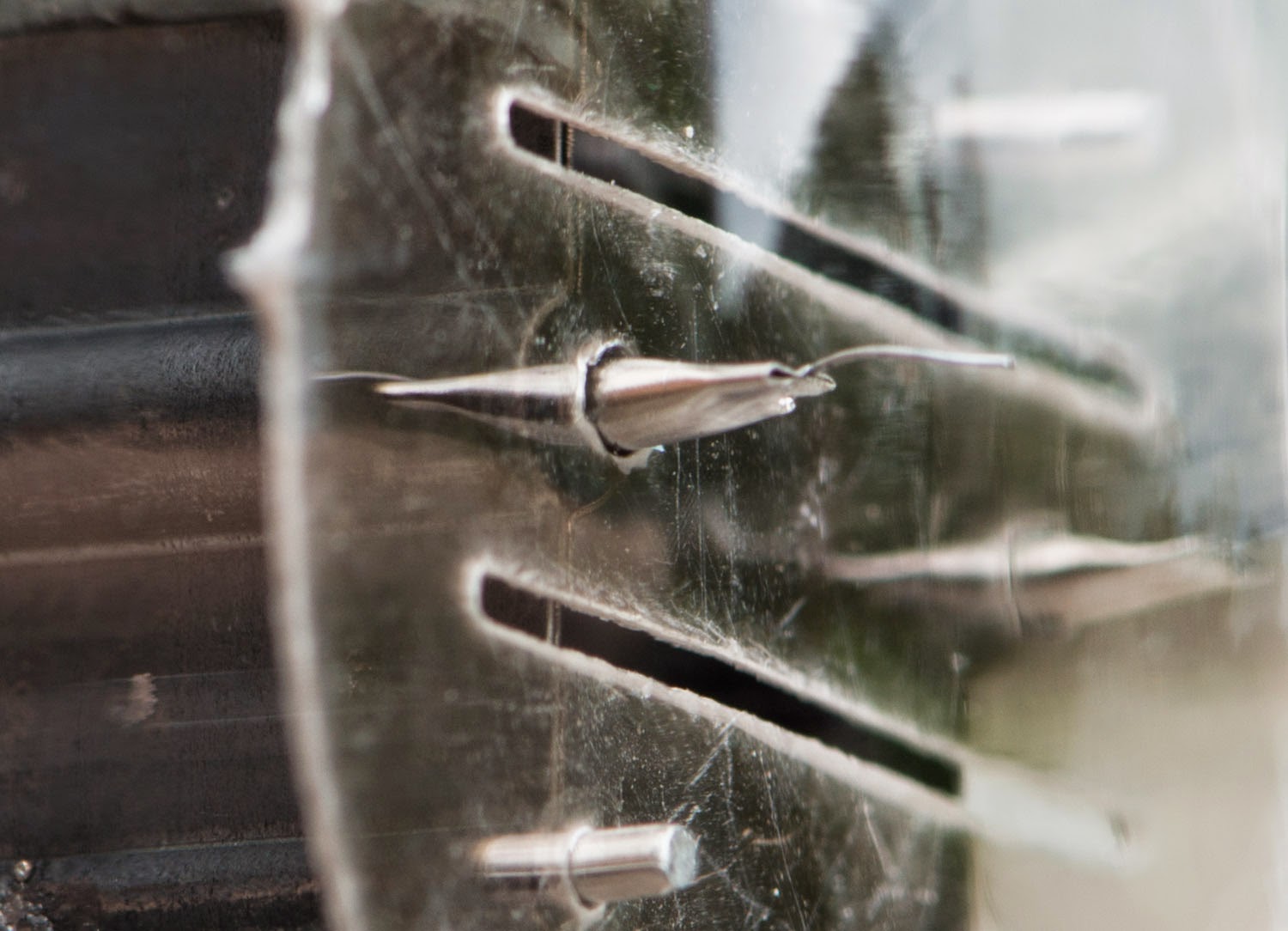 Tube marking on the glass: 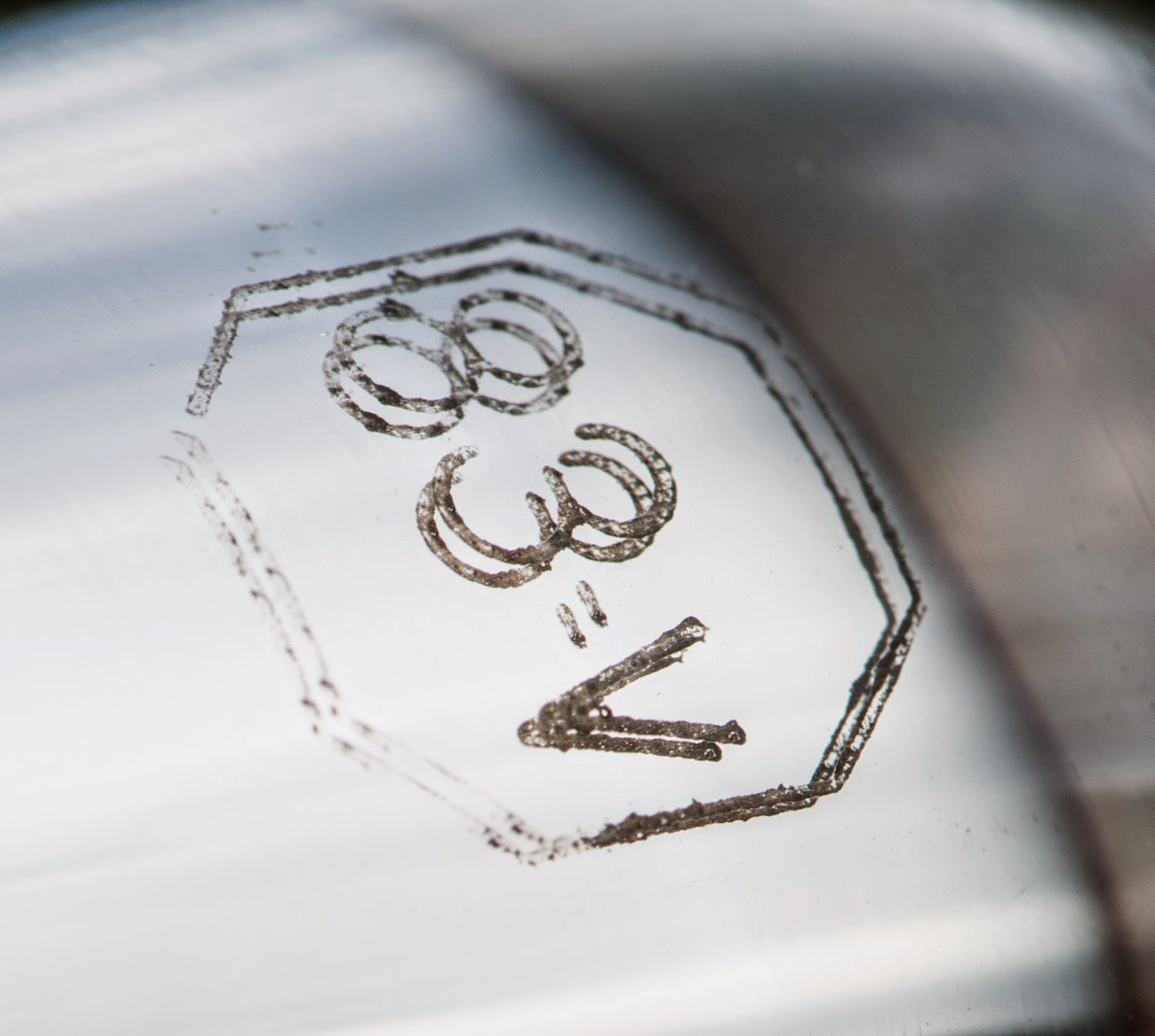 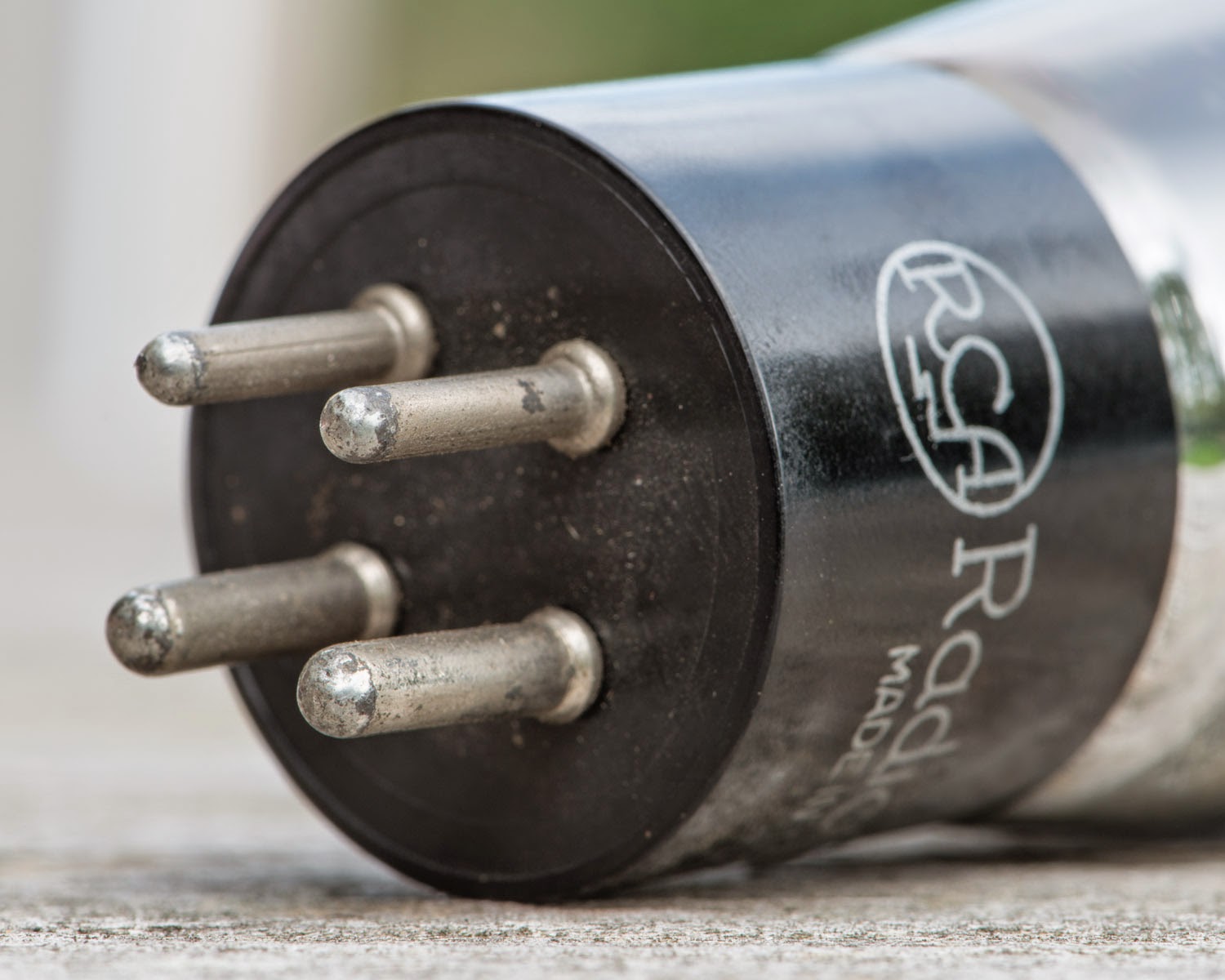 As mentioned above, the 83v is electrically identical to the 5V4. Here both tubes side by side: 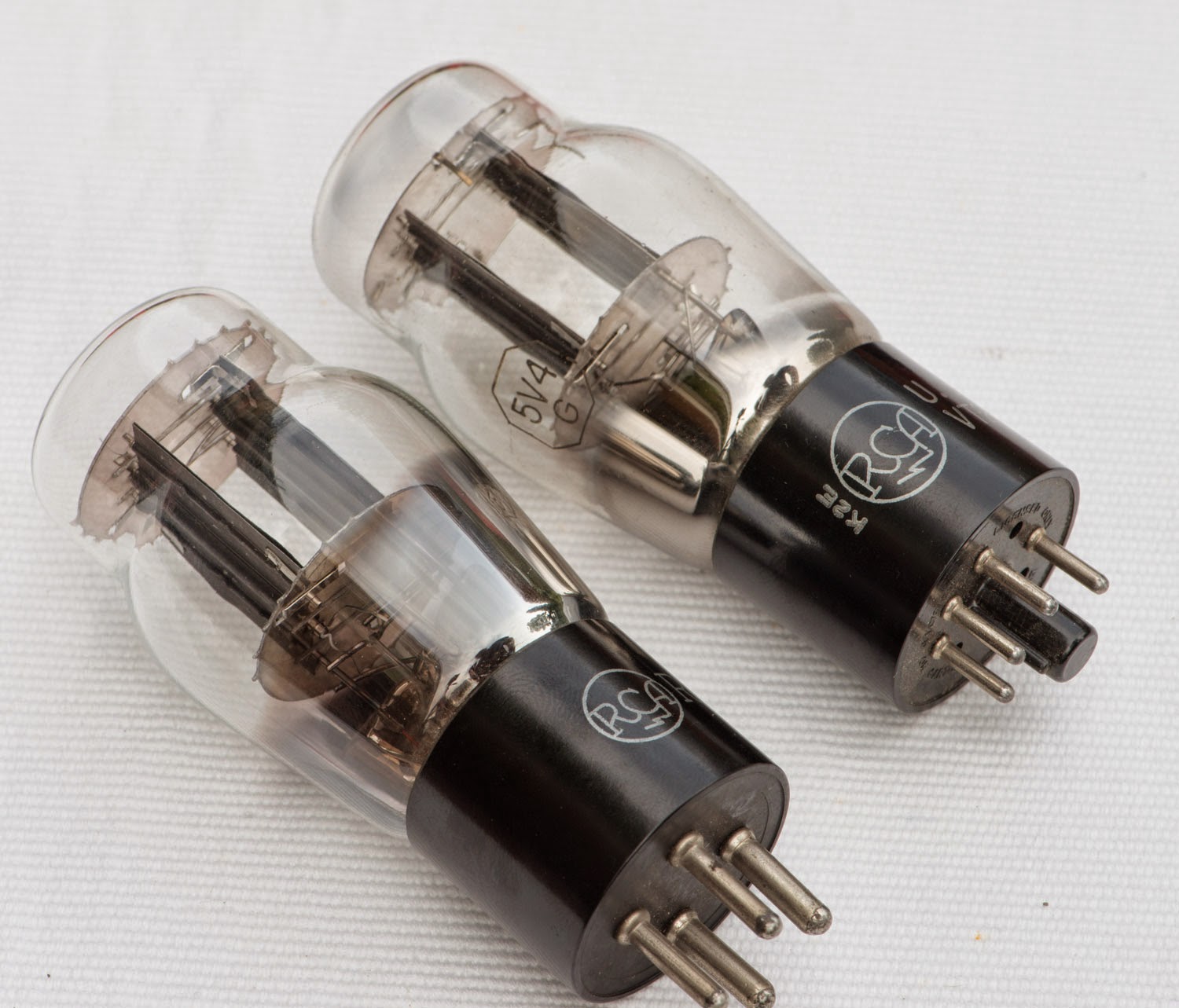 The top of both tubes: 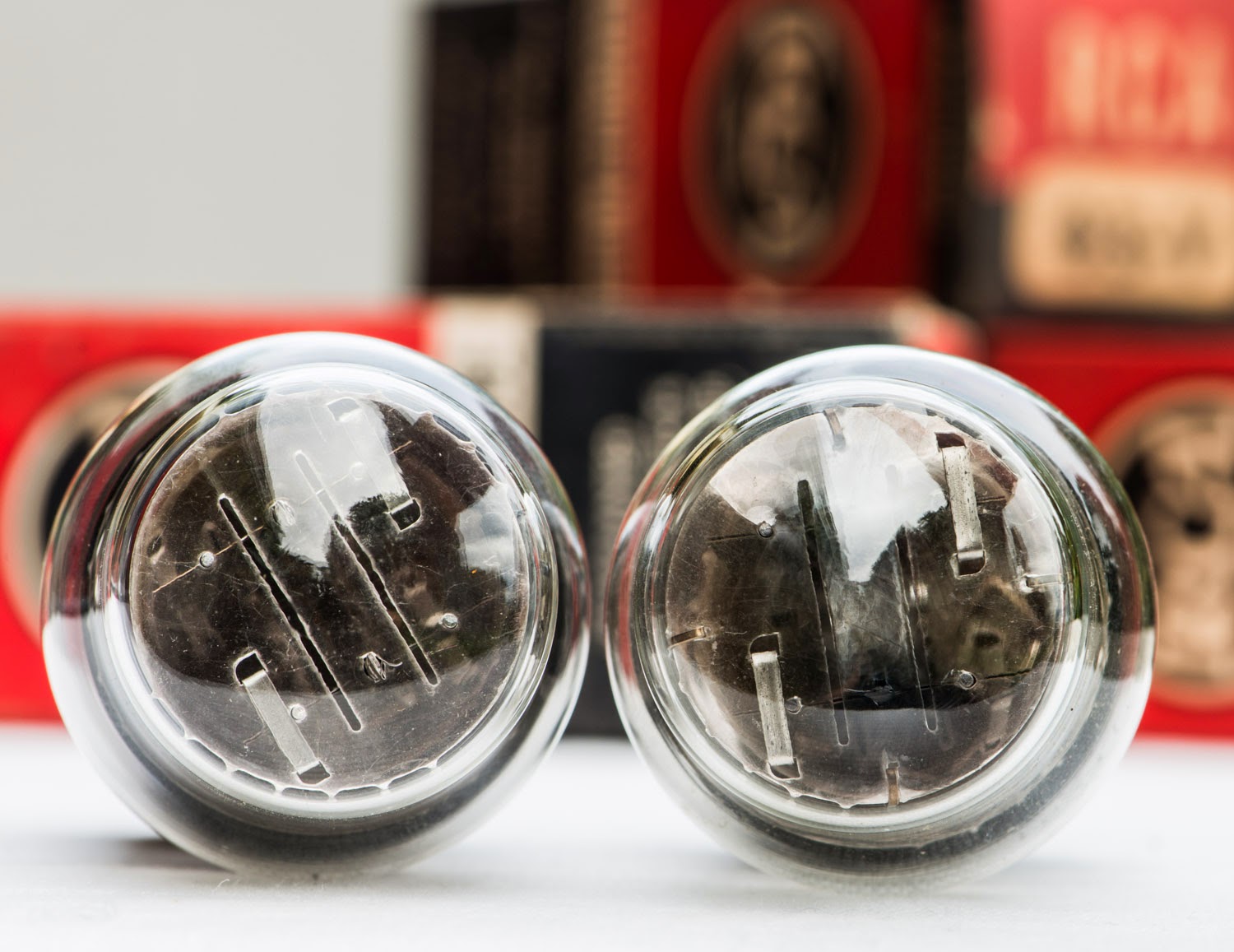 The only difference is the base, the 5V4 is a Octal tube: 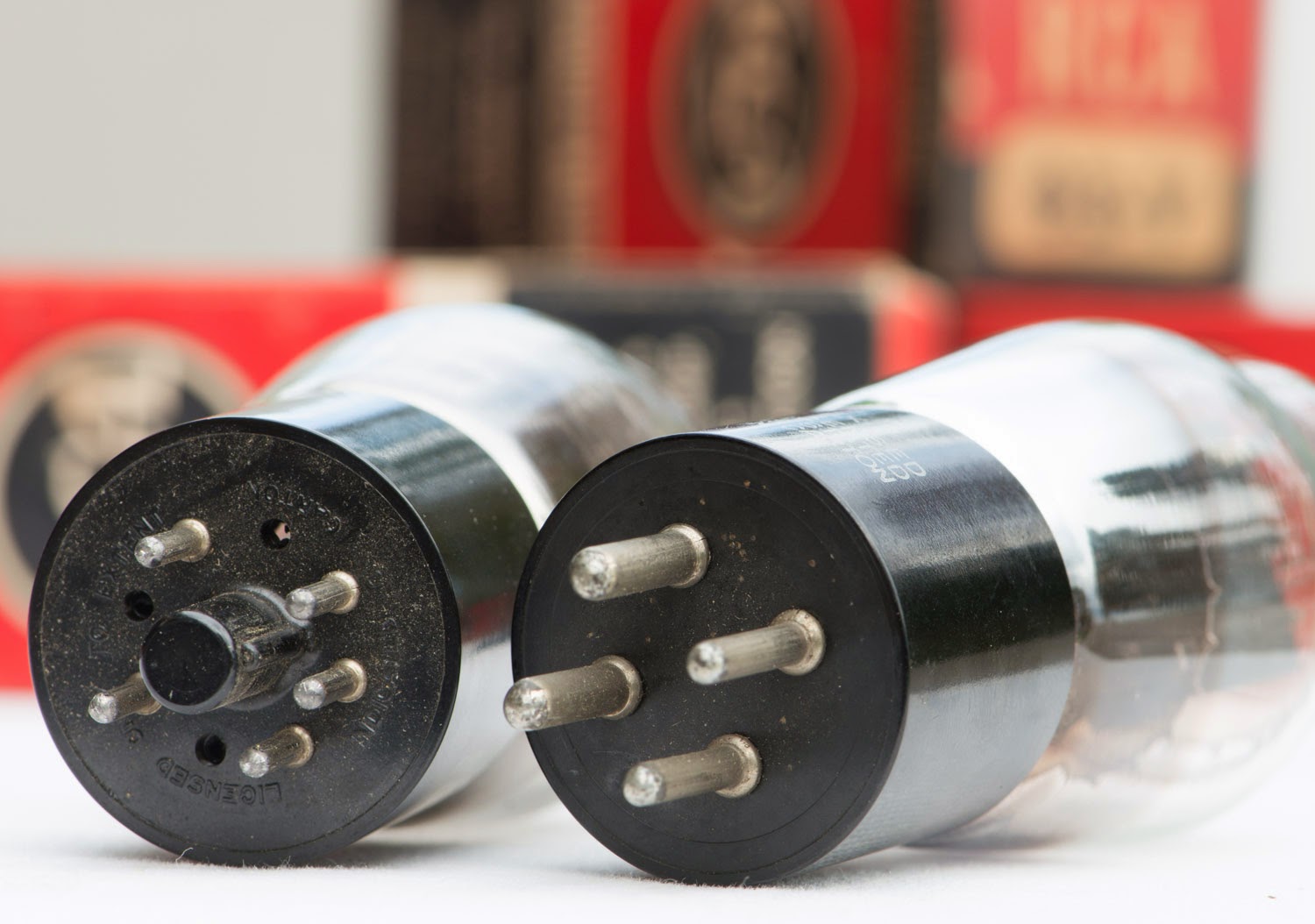 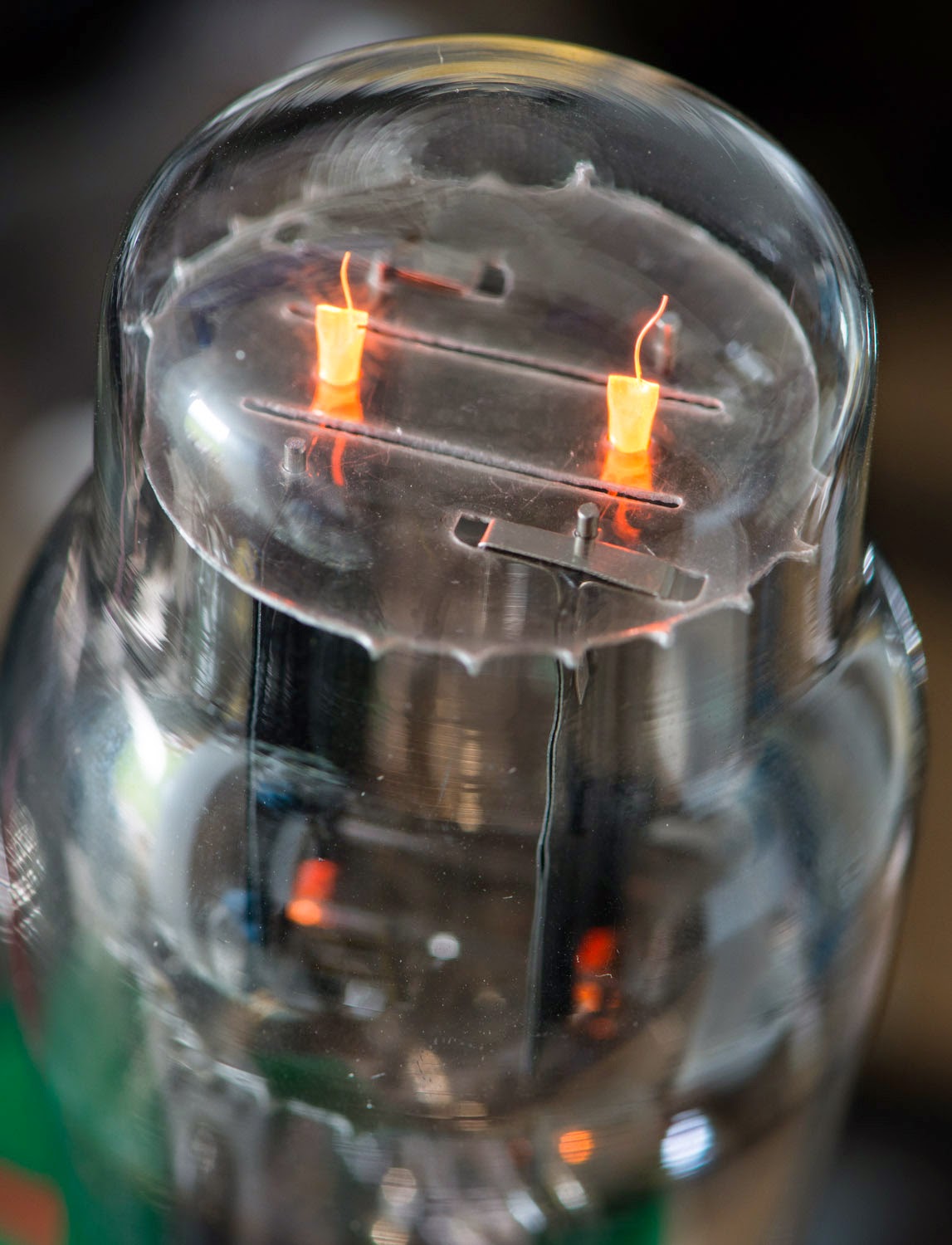 The cathodes give off a nice orange glow. 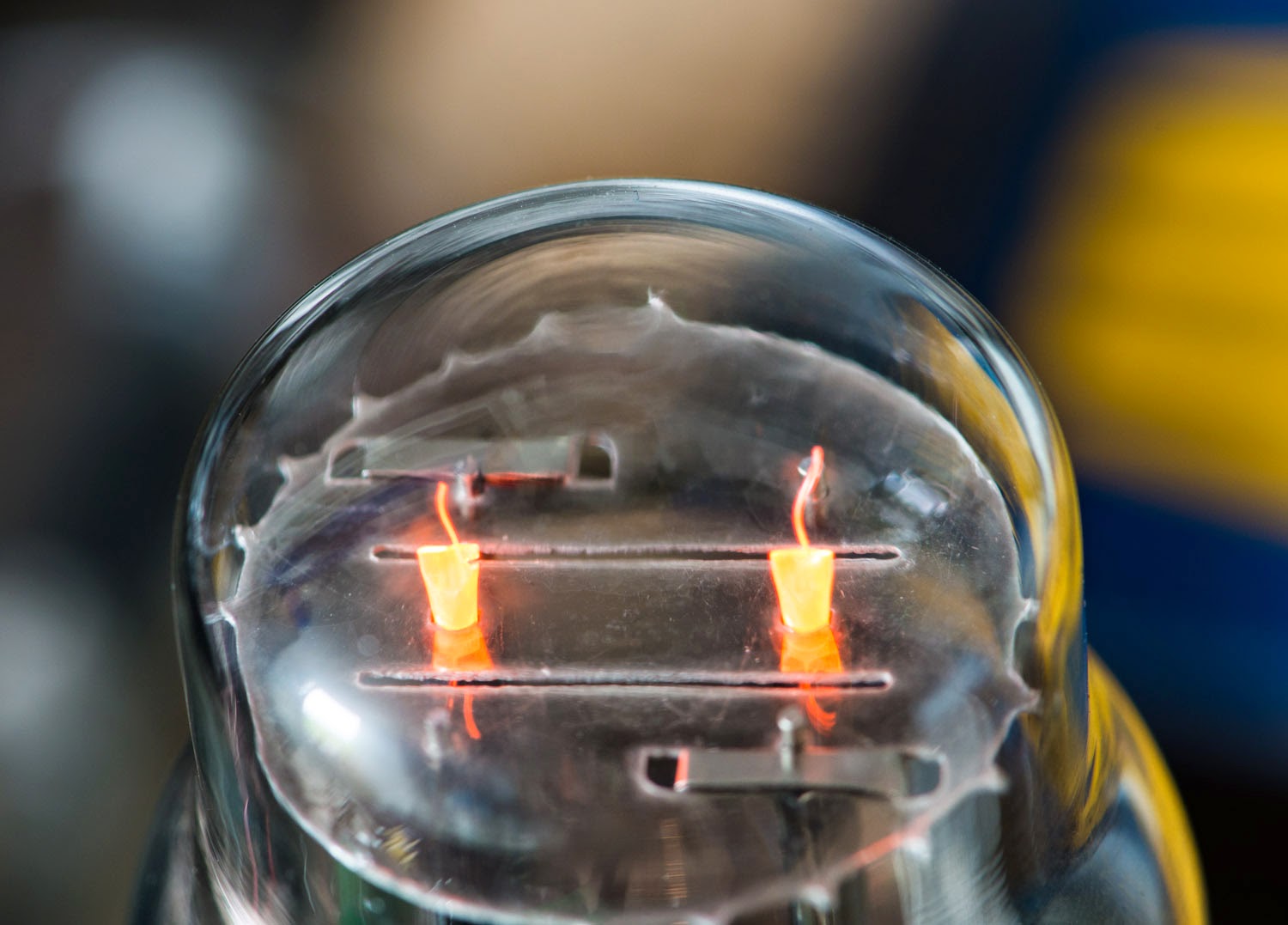 A close up to one of the cathodes: 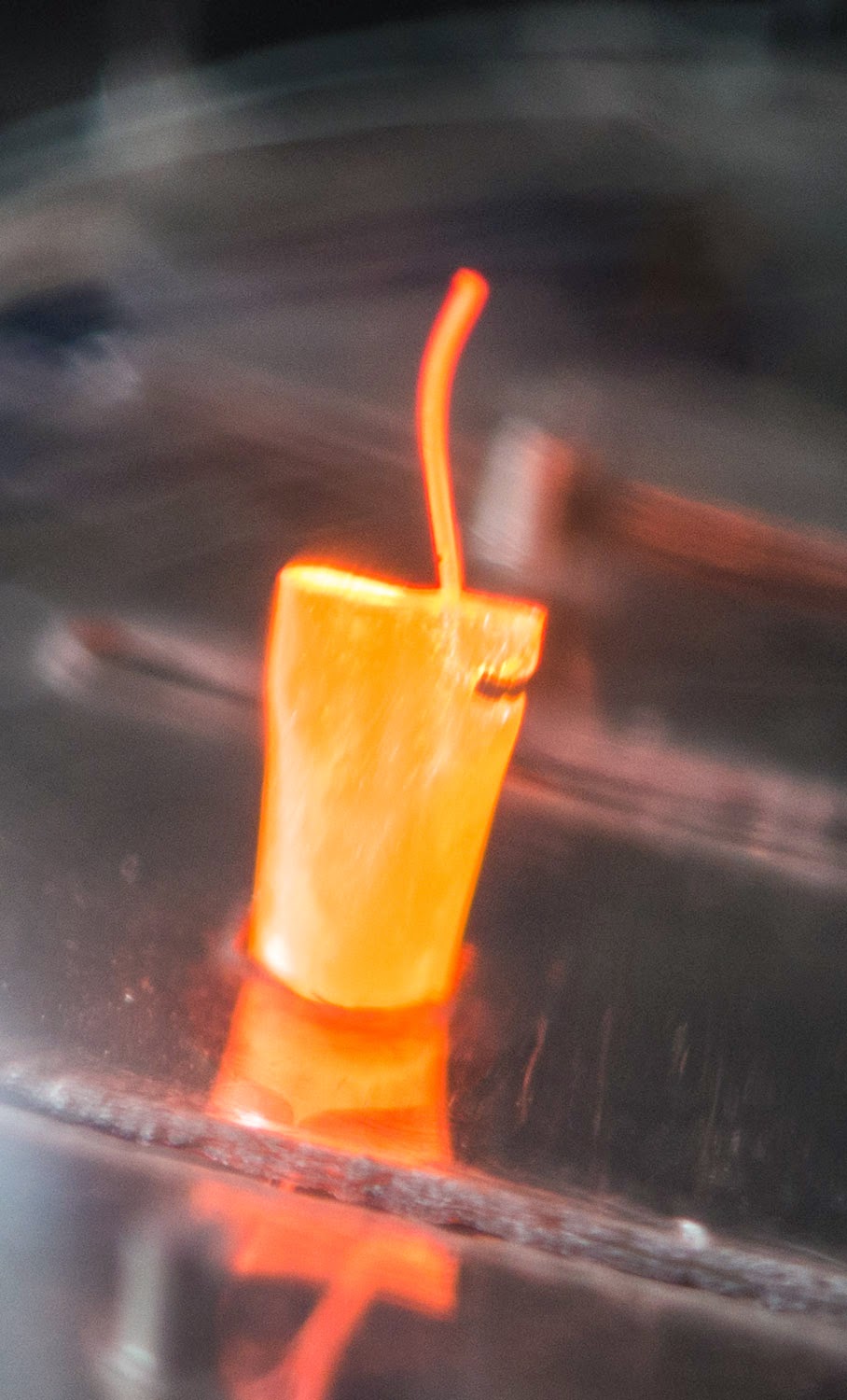 The bottom part of the tube: 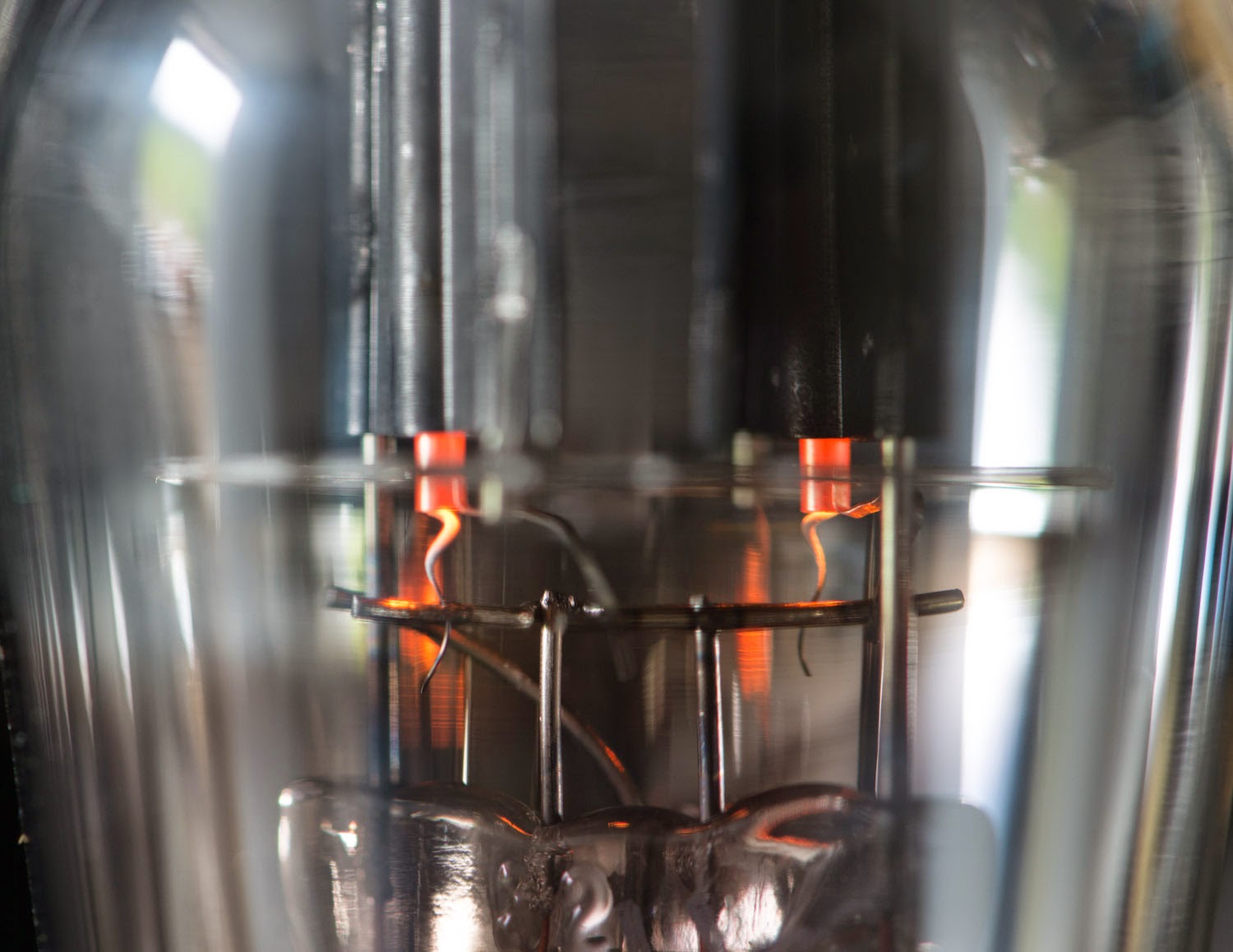 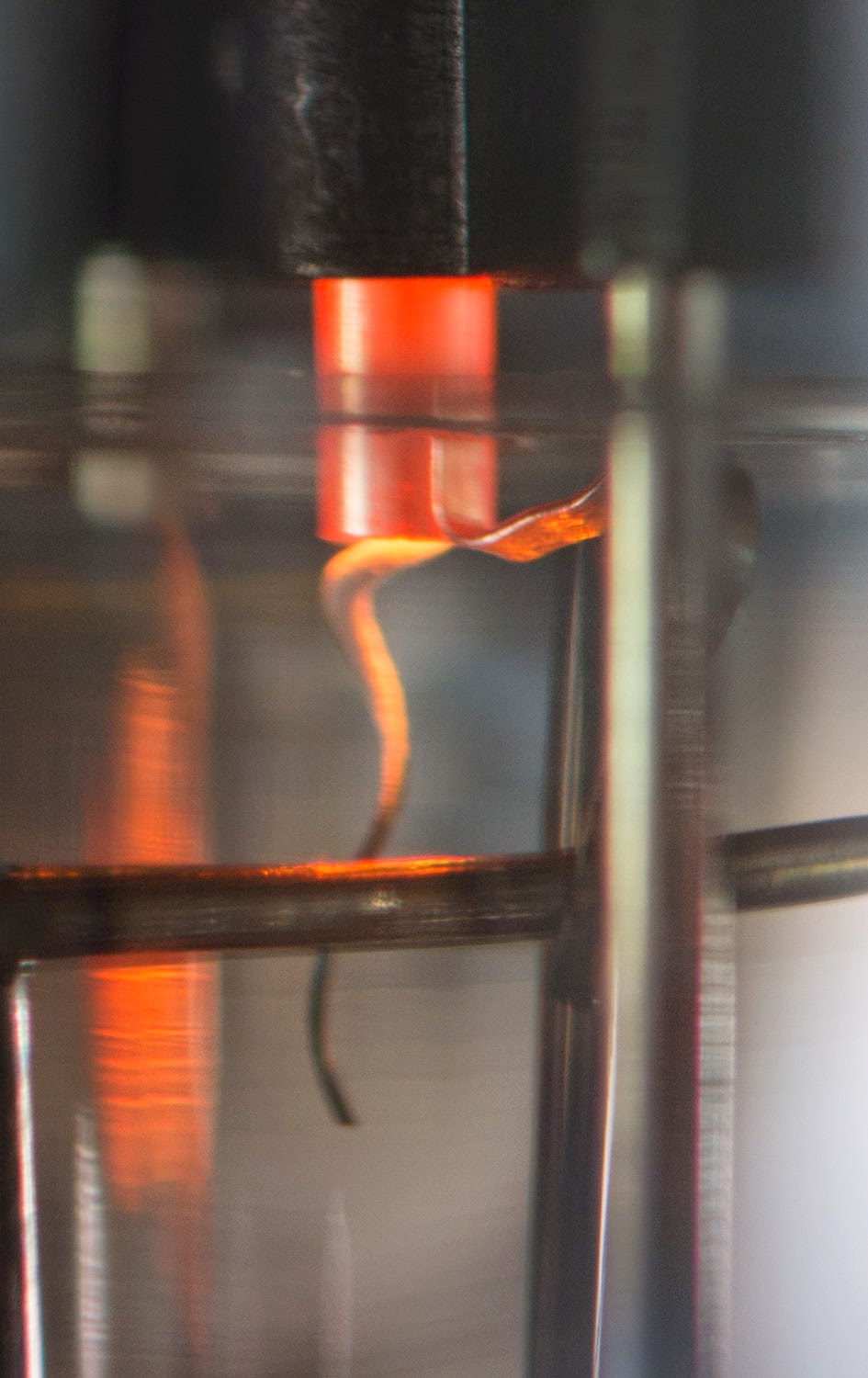 Can't get enough of that beautiful glow. That's why the color scheme of the logo at the top of the blog resembles the glow of tubes. 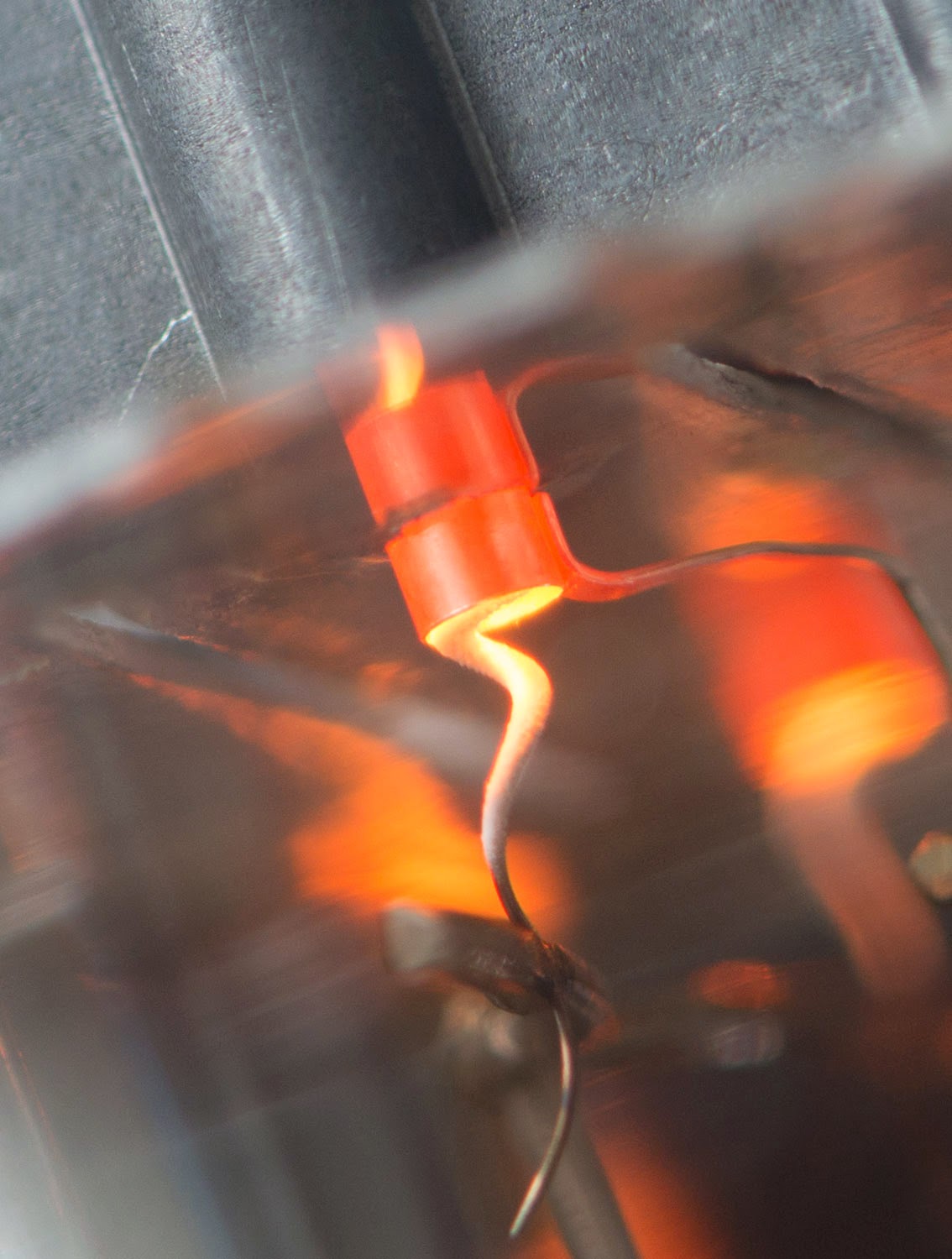 I hope you enjoyed this expedition into the world of 'classic' rectifier tubes. 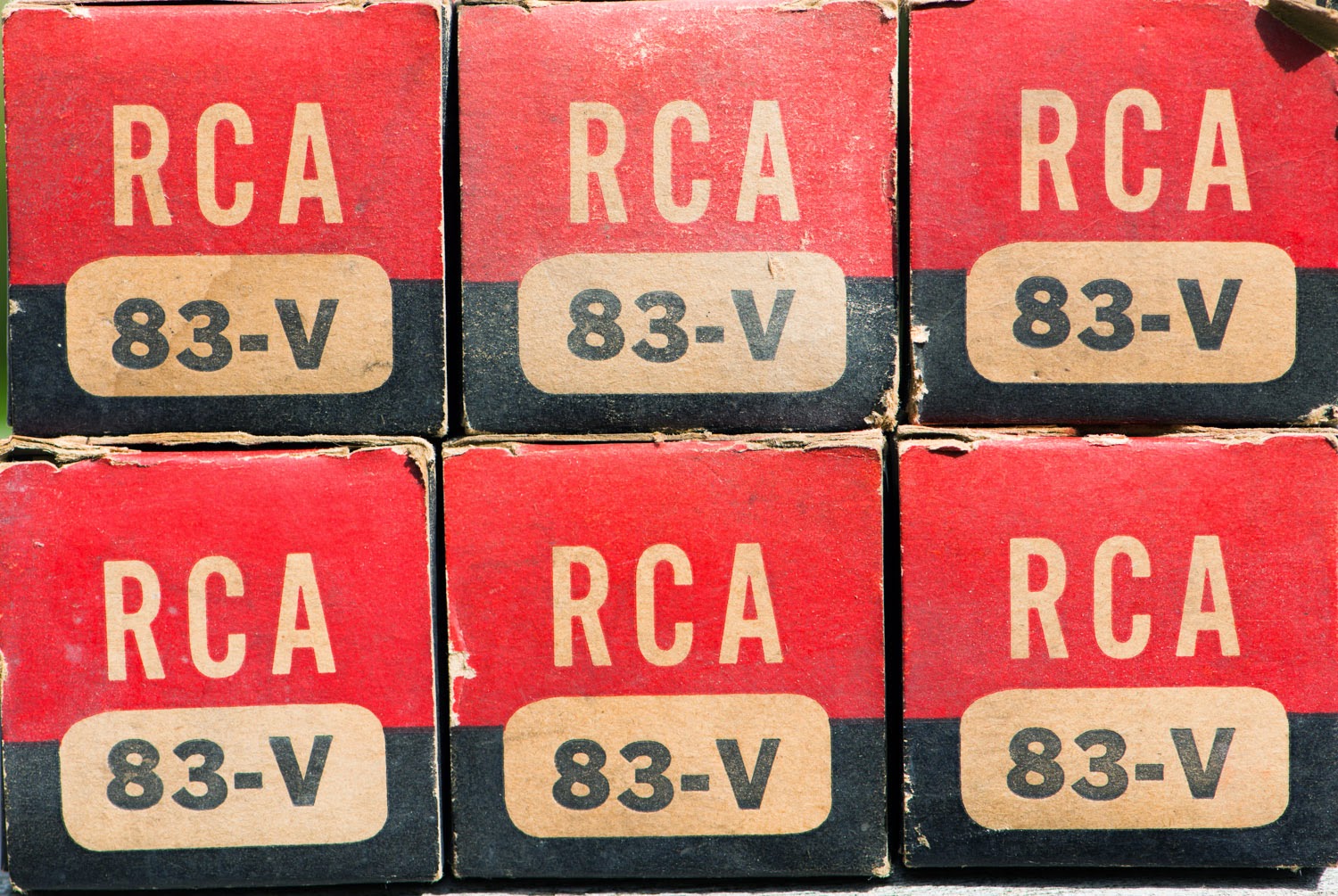 Email ThisBlogThis!Share to TwitterShare to FacebookShare to Pinterest
Labels: 5V4, 83, 83V, Tube of the month