This weekend I finally had some time to start experiments with my Kilimanjaro Series field coil drivers. For these I prepared a new listening room which I will use to demo my gear. Of course this room needs an adequate speaker. 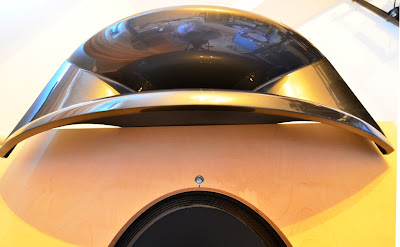 I have various horns in my collection. One of them is an Iwata horn made of die casted aluminum. This is one pair of a few which got custom made by a group of people in Berlin. One of the members of the Munich Triode Mafia bought a pair years ago. I found them in his attic and we set up a deal. Unfortunately the horns were poorly painted in a horrible blue. So I brought them to a car paint shop where they got sandblasted and repainted in a special color which is used by Mercedes. the color is called 'designo graphite green'.

I used these horns a long time in my speaker installation in Munich, which is now dismatled: 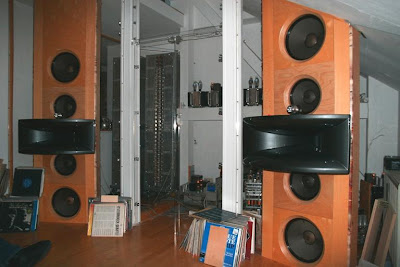 In this system the Iwatas replaced TAD4001 horns which I had before. First I used them with TAD4001 drivers. After I tried Wolf von Langa's A288 field coil drivers, the TADs went out and I was bitten by the field coil virus. The horns were used with various combinations of Altec drivers for the lower mids and bass: 414As, 515Bs and 416As. During the time of the High End fair 2010 Wolf and myself set up a demo at my place for which we replaced some of the Altec woofers against his A515 field coils. After that session it was clear to me that one day I need to have a full field coil speaker system. 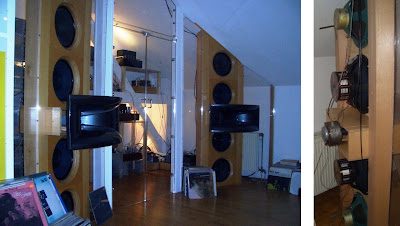 Initially I planned to have two woofers per side, A416s and A515. For the first trial I got simple open baffles made from multiplex wood for just a single woofer. Since my new listening room is fairly small I will initially go with with one per side. If the A515 needs some sub bass support, I will add the A416, kicking in at low frequency. 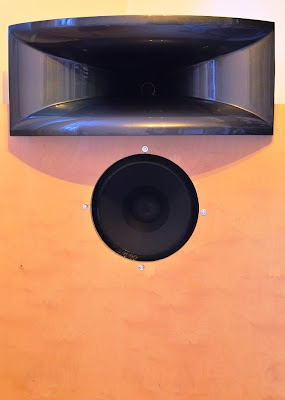 A close up of the horn driver mounted to the Iwata horn: 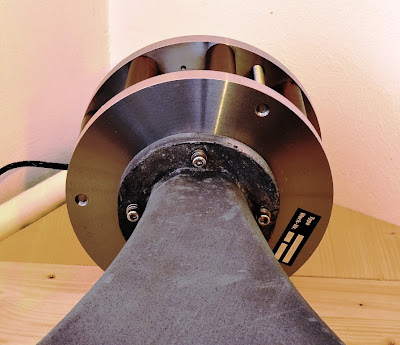 The horn drivers have a high voltage field coil. They will get a tube rectified and choke filtered power supply which still needs to be built. The speaker will be set up as an active system with separate amps for bass and horn driver and later also for a tweeter if needed. Frequencies will be divided passively between linestage and power amps. The system will get a LCR type crossover.

For a first listening the woofer had to be operated full range with the field coil powered from a lab PSU since crossover and high voltage field coil PSU still need to be built. Of course this is no meaningful listening test but it already gave an hint of the incredible tone these field coil woofers are capable of.

I also consider to give Wolf's enclosures a try if they fit into the room. Once the final enclosure is decided upon it will be made in some nicer wood. 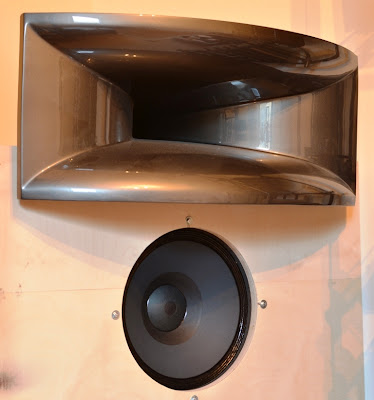 Stay tuned for updates as the speaker development progresses.

Thomas
Posted by VinylSavor at 12:11