Making of a Line Level Crossover

Just finished testing and tweaking of a line level crossover which I started working on in November. The crossover is meant to be used between the linestage and power amplifiers in an active speaker system. I made this for my good friend Stefano for his Gotorama system. 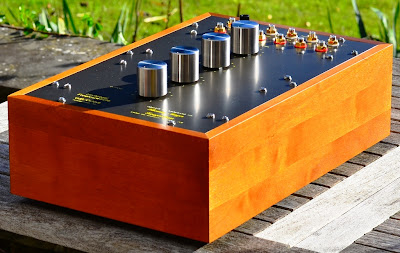 It is meant to complement his preamplifier combo. There are several ways to implement such a crossover. It can be active, which is the most common method, or passive. This might create some confusion since mostly active crossovers are used in such systems. The speaker system setup is still active even when the crossover is done in passive fashion. Active speaker only means that each chassis has it's own amplifier.

Only the best is good enough for Stefano. So the crossover had to be passive, thus minimizing the number of gain stages in the set up. Since he has a line stage with low output impedance the crossover could be done with low impedance LCR type networks which are similar circuit as in 600 Ohm LCR RIAA networks. 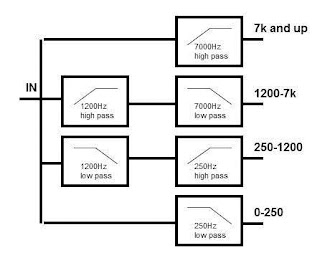 Stefano consulted his friend Franz, who built the bass enclosures for his speaker and who did an excellent job setting it up. Topology and crossover frequencies have been extensively discussed and tested beforehand with a digital crossover. 6dB/octave slopes have been chosen since steeper slopes become very unpractical with LCR networks. The picture on the left shows the overall scheme. Not shown in the scheme are passive level controls on each of the outputs which allow level adjustments in 12 1dB steps for leveling each frequency range and possible adaption to the gain of different power amplifiers. 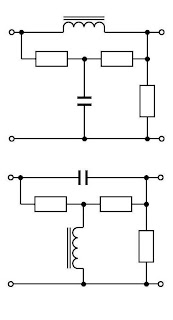 The schematics on the right show the principle of LCR filter networks. The first schematic shows a low pass. This is the same type of filter as used for the 75uS time constant in LCR RIAAs. By simply swapping the coil and choke this can be turned into a high pass filter as shown in the second schematic. The values of the coil can be easily calculated: L = R / 2 * Pi * f   the capacitor calculates C = 1 / 2 * Pi * R * f . R is the impedance of the networks. All the resistor values are the same, f is the desired corner frequency. For the lower and upper mid range band pass filters, two LCR networks need to be wired in series. When two filters are connected in series, the impedance of the second one terminates the first one so the first filter does not need the termination resistor. Of course in this case both need to be calculated for the same impedance. The LCR filters in the crossover have the same advantage as in a RIAA network. They have a constant input impedance which is independent of the frequency. So the filter behavior does not alter with variations of the driving impedance. This ensures constant performance over long time also when the output tube of the driving line stage changes it's plate resistance with age.

Since Stefano had been very happy with the transformer volume control in his linestage, the same approach was chosen for the level adjustments at each output. Custom autoformer volume controls were made by Dave Slage of intactaudio for this project.


The crossover was made in the same style as the existing preamp combination so the whole combo becomes a Triptychon for Stefanos audio shrine. 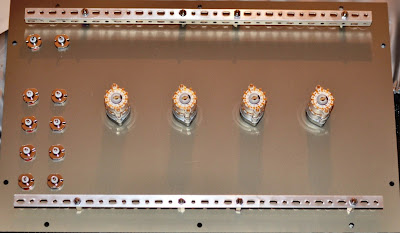 The photo above shows the first assembly step. Mounting of the RCA inputs and outputs and the switches for the level adjustements. 12 step ELMA rotary switches are used. Then the autoformers got mounted close to the switches: 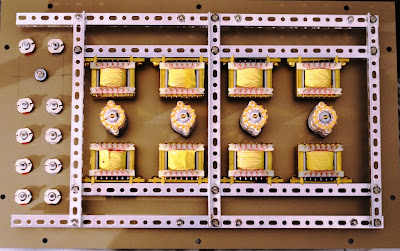 Then the TVCs had to be wired up to the switches. Wiring a single TVC is already a quite tedious job. Wiring 8 of them is a challenge: 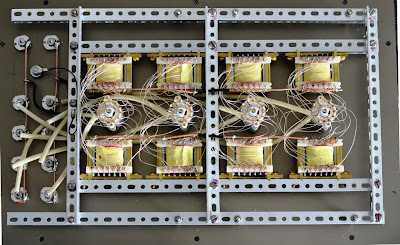 Again only the best is good enough. So teflon insulated solid core silver wire is used. Correct wiring of all TVCs was tested before the next step. Since the filter networks had to be mounted in a second level above the TVCs it was essential to make sure there is no wiring mistake. Fixing it afterwards would be quite painful since they would be difficult to access below the filter coils: 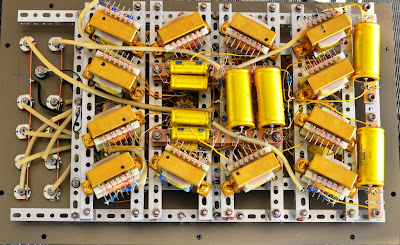 A total of 20 nickel cores. All wired up with about 15m of silver wire. After testing and trimming of the coils the Crossover measured as calculated and simulated and could be assembled into the wooden enclosure. 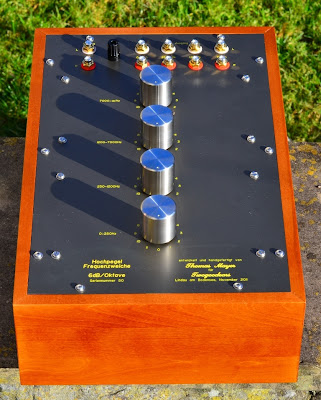 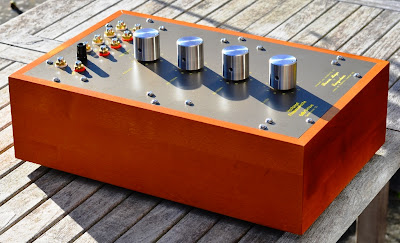 Ready to be tested in the system. Since I'm also planning to build an active speaker set up, I will built another one for myself. 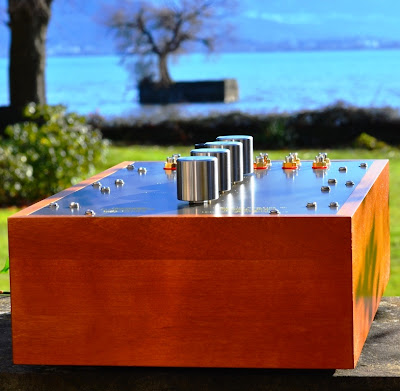