This months tube is one of my favorite directly heated triodes, the 10Y: 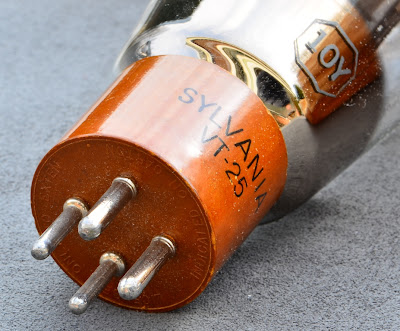 The 10Y is a small transmitting tube, it is a 'special' version of the 10 which was introduced in the 1920s as type UX210. It is very similar to the famous 801A which has a higher maximum plate voltage and dissipation. The 801A will be covered separately in a future article. Todays post will cover all the variants of the 10. The 10, 10Y and UX210 were manufactured by many companies and were also used by the military which used the designation VT25. 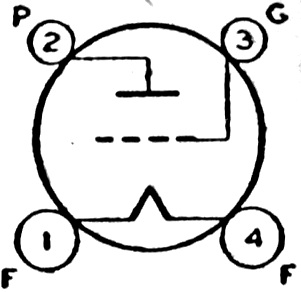 The 10Y has a 4 pin UX4 base like most directly heated triodes. It has a plate dissipation of 10 Watts which is good for about 1.5W as output tube in a single ended amplifier. Filament voltage is 7.5V which makes a DC filament supply adviceable although it can be heated with AC as well. Filament current is a moderate 1.25A. Complete data can be found here. The 10Y is quite popular for usage in SE amps although it is rather demanding in terms of primary impedance of the output transformer. The datasheet suggests a load of 10k. I prefer a higher impedance of 14k or better 16k as can be obtained for example with Lundahls LL2735B. I prefer the 801A in power amps since it can provide more than double the output power. 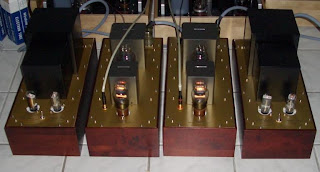 The 10Y makes an excellent driver tube for the 300B which will bring 300B amps to a complete new level in performance compared to more conventional driver tubes. I have also succesfully used the 10Y as a driver for the 45. Photos of such an amp can be found here. But my favorite usage of the 10Y is in directly heated linestages. In a linestage this tube will provide unparalleled performance if used carefully. This requires a high quality filament supply since the 10Y will make everything audible which is across it's filament in a linestage. Voltage regulation will result in a very screechy sound. At least current regulation should be used. But I prefer a pure passively filtered filament supply using two chokes in LCL configuration on the filament of each tube. In conjunction with a suitable line output transformer it will be extremely musical combined with neutrality and very high resolution. These are sound attributes which are difficult to combine into one amp or preamp. 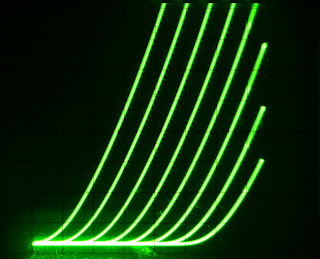 One reason for it's good sound is the extreme linearity of the tube. The photo above shows a set of plate curves taken from an actual tube with a curve tracer.
Since the tube has been built by many different manufacturers, it is available in lots of variations. Even the same manufacturers changed construction deatils over the years. 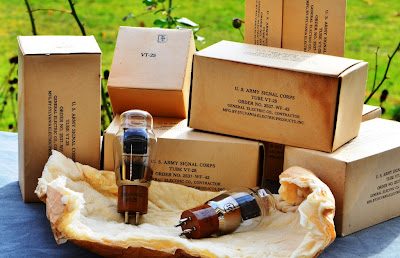 The photo above shows a collection of VT25 tubes, manufactured by Sylvania for the army. As the carton indicates they were delivered by General Electric which apparently got these tubes built by Sylvania. As with many tube types crossbranding was common practice. 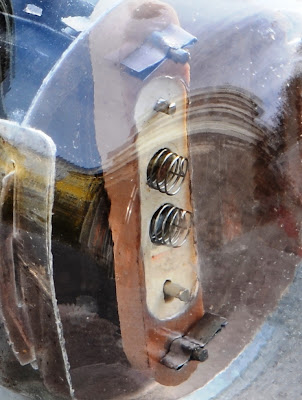 Most 10Ys have thoriated tungsten filaments which are arranged in 'M' fashion. But other variants exists as well. The filaments in the VT25s which are shown above, have springs in the upper support structures which provide the correct tension of the filaments. While I have no specific preference for a certain manufacturer, I do like the sound of thoriated tungsten filaments better than oxide coated. They provide more detail but are also more critical towards the filament supply. Oxide coated filaments are more foregiving and provide a smoother sound which might be an advantage in certain systems. For me the thoriated tungsten sound is unbeatable. As with many aspects in audio systems this is also a matter of taste, preferences and system synergy. The VT25 got an update to VT25A during the years. I have samples of both versions from Sylvania. The obvious difference between the two is the much larger plate of the A-version: 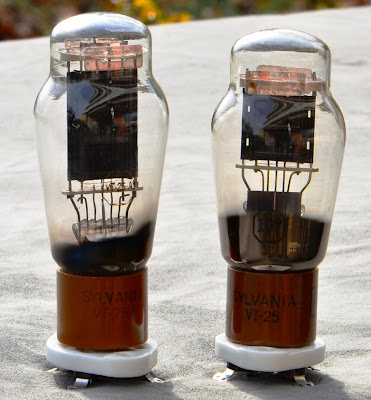 The close up shows that the A-version has a plate which is about 50% larger! Quite a significant difference. This would indicate a higher maximum plate dissipation. This was probably done to ruggedize the tube.

Another significant difference is the change from a bright emitter thoriated tungsten filament in the VT25 to a dull oxide coated filament in the VT25-A. Similar to the filaments of 45, 2A3 or 300B. Quite a different appearance when they are operated in the dark: 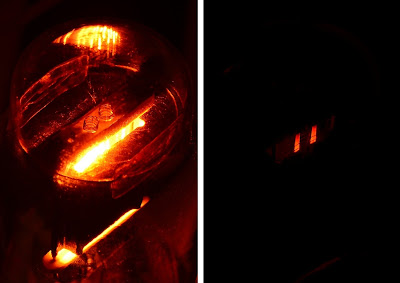 Tung-Sol also made some 10Ys with oxide coated filaments: 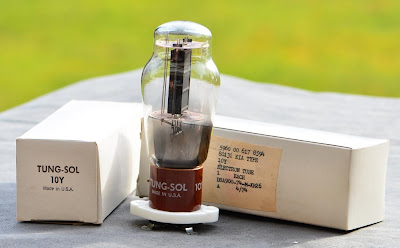 This closeup shows the ribbon style filaments of the Tung-Sol 10Y: 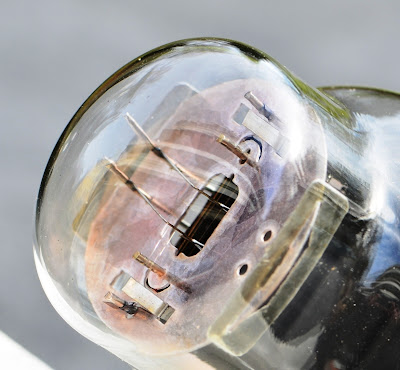 This photo also shows the different suspension of the filament compared to the springs of the Sylvania tube above. Another example for oxide coated filament versions of this tube is the Western Electric VT25: 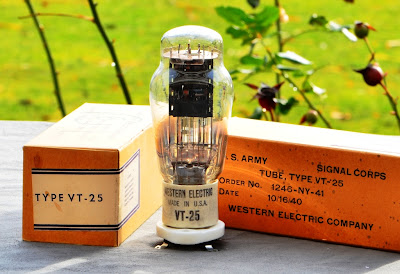 The 10Y was also manufactured in Europe. The next photo shows the Neotron 10Y, made in France. 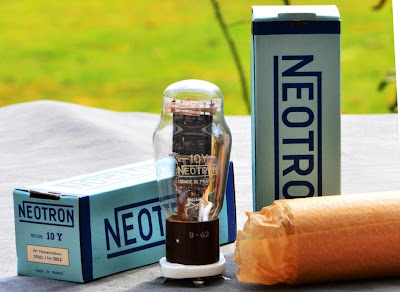 Many people are very fond of globe tubes which makes them very sought after and rare since globes have been manufactured only up to the early 1930ies. I admit. I'm no exception, globes are just so beautiful! Here a RCA globe 10: 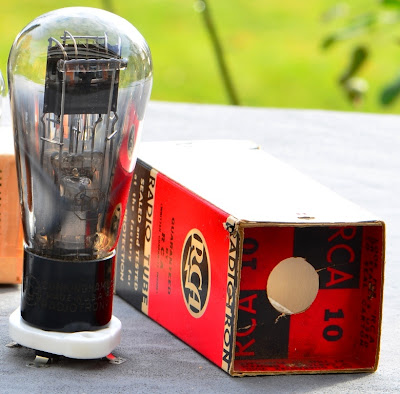 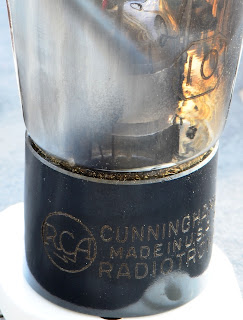 A gorgeous tube with a nice engraved base. Most globe tubes bear UX210 as designation but apparently RCA also made globes after the naming convention changed to the two digit system. Unfortunately globe verisons of the 10 are much rarer than globes of other tube types. Especially globe versions with thoriated filaments are difficult to get. These filaments become quite brittle during use. Especially the filaments of globe UX210s are very sensitive and break easily. Make sure to treat your thoriated tungsten filament tubes with utmost care. They need careful packaging during shipment. Also be very careful when the tube is still hot. The filament is easily damaged when you swap the tubes in a tube rolling session and don't leave time for them to cool off a bit. Besides their beautiful appearance many also prefer globes for their sound and I do so as well. Globes consistently perform better compared to the more modern ST style versions. Not only with the 10 but I experienced this also with other tube types. One reason for this might be the lack of the use of mica in the globes. ST type tubes use mica discs as support for the electrodes. It is quite likely that the mica releases some gasses during use und contaminates the vacuum and other electrodes. However I have no scientific support for this, it is pure speculation. This close up of a RCA UX210 shows how the globe tubes do without the mica disc at the top: 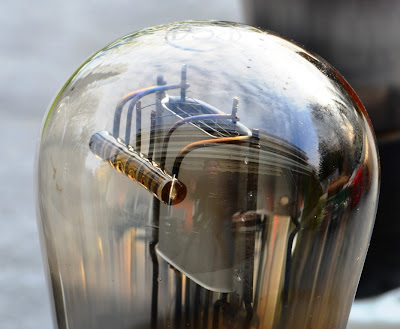 Again many variations exist, even from the same manufacturer. Here another RCA globe UX210: 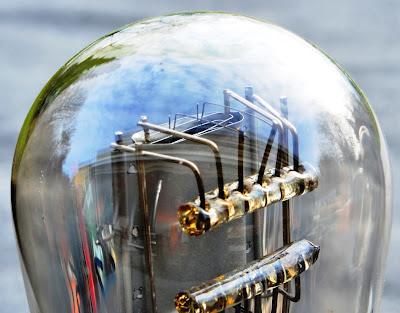 A collection of three different RCA UX210s and a NOS Cunningham CX310 still in original box: 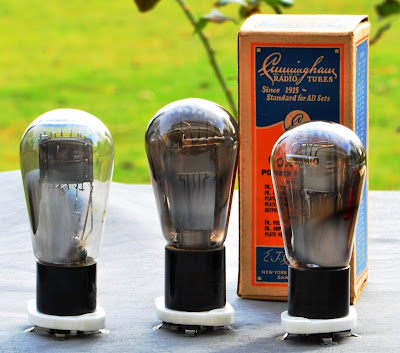 Taylor also made globe versions of the 10Y/VT25 with thoriated filaments. These are extremely rare and I was lucky to find some of them: 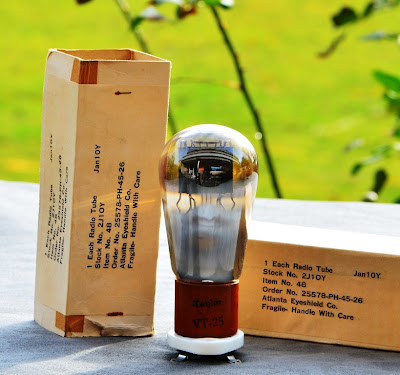 These also share the same mica-less construction and provide an astounding sound in my directly heated linestage: 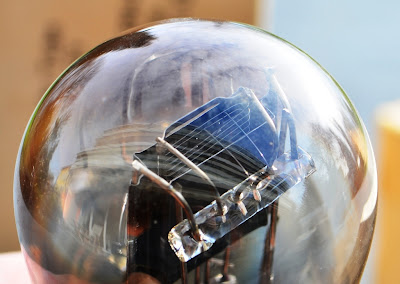 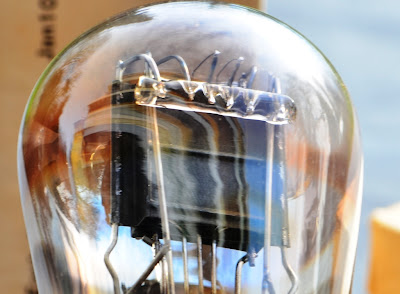 But don't get frustrated if you can't find those globes, although they sound better, the much more common ST-style tubes also provide an extremly pleasing sound which leaves nothing to desire. ST style 10Ys are still quite easy to find. Especially Hytron VT25s seem to be common: 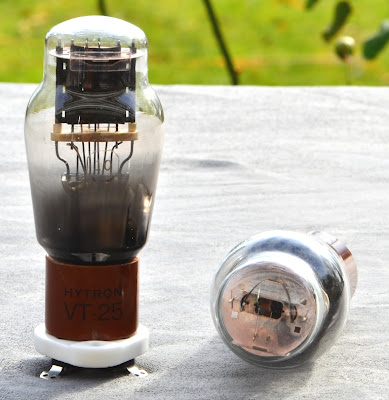 A collection of a variety of different 10s and 10Ys: 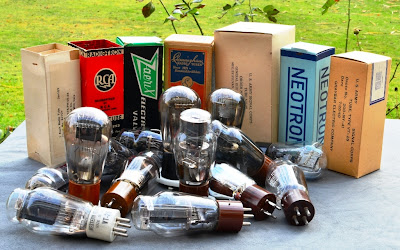 I'm about to build a new linestage with the 10Y using the line output transformer with the secondary as tapped volume selector from Tribute. This linestage will use the same chassis style as the modular preamp series presented in recent post. The making of that preamp will be shown in an upcoming article.

Thomas
Posted by VinylSavor at 11:02

Email ThisBlogThis!Share to TwitterShare to FacebookShare to Pinterest
Labels: 10Y, Tube of the month