In 2011 I already introduced a low cost version of the 6CB5A amplifier concept in the article single ended amplifier concept part 4. I occasionally get complaints that most of the designs which I present and offer as kit are too expensive. Therefore I would like to give this low cost amplifier design more attention. I recently finished mono blocks based on this circuit. I will outline the schematic and building process of these amps in detail in this and the upcoming articles. 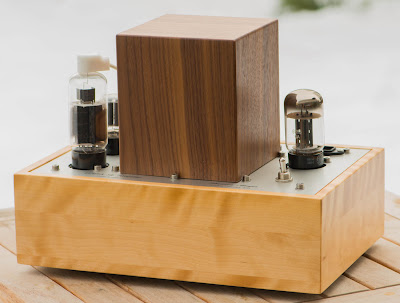 Why mono blocks? You might wonder since most of my amps are stereo builds and I am a proponent of stereo amps rather than mono blocks. Two reasons: I had two small wooden chassis on hand which are just big enough for a mono block, but not a stereo amplifier. And secondly, mono blocks seem to be very fashionable, although there is no real advantage to a mono design over a well implemented stereo amplifier. So I follow the taste of the crowd on this one, although it doesn't make a lot of sense, especially for a low cost object.

In order to keep cost as low as possible, certain compromises are necessary. An obvious one is the interstage transformer which has to go. A RC coupled driver stage will do the job. Also no expensive oil caps. Electrolytics will fit into the restricted space and are the lowest cost option. This probably is the biggest compromise. Also the PSU needs to be a bit simpler, no external PSU. 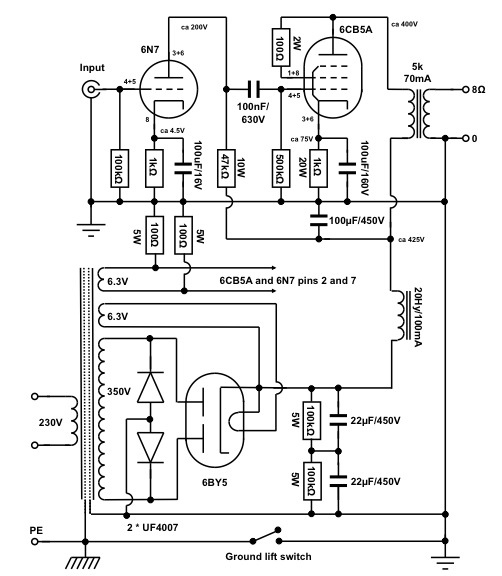 The schematic shows the whole circuit including power supply. Unmarked resistors can be 0.5W types. Approximate voltages are given for the most critical nodes. Let's go through the schematic step by step, starting at the input. The resistor to ground after the input defines the input impedance of the amp which will be 100kOhms in this case. It also serves as grid to ground resistor for the 6N7 input tube, to ensure the grid is at ground potential. The 6N7 contains two triodes with a common cathode. The grids and plates of the two sections are tied together. The input tube is cathode biased with a 1k resistor to ground. This will set the bias approximately at -4.5V and will result in 4.5mA current through the tube. The cathode resistor is bypassed with a 100uF electrolytic. Gain of the amp is on the low side, so we need to get all the gain from the 6N7 we can, therefore we need that bypass cap. The tube has a 47k plate load resistor. At minimum a 10W type should be used. I use 20W Dale aluminium resistors there. The plate of the 6N7 will settle at about half the B+ voltage.

The driver is coupled through a 100nF capacitor to the output tube grid. I  used a 1000V MKP foil there. At minimum a 450V should be used. The output stage is also cathode biased with a 1k resistor. Since we do not use the ultrapath approach as in my usual designs, this needs to be bypassed with a 100uF cap. The cathode resistor dissipates quite some power, so a 20W type is recommended. Again an aluminum Dale resistor does it for me. The 6CB5A needs a grid to ground resistor of max 500k for save operation. Since I didn't have 500k at hand, I wired two 1M resistors in parallel. The screen grid is connected to the plate through a 100 Ohm resistor which should be placed close to the screen grid pin.

The 6CB5A works well with plate loads of 3.5k upwards. I prefer amps with a decent damping factor to make them usable with a wider range of speakers so I recommend 5k. Lundahl has some quite reasonably priced output transformers which fit the bill. LL1663/70mA would work well. For this particular build I chose the LL1682/70mA for an even lower output impedance. It is a 5.5k:5 transformer. This way the amp can be used with either 4 or 8 Ohm speakers.

Let's have a look at the power supply section. I gave up my favorite choke input supply concept since this usually needs at least two chokes to get the ripple down. I didn't want to give up chokes all together, so a single choke stayed in there. A Lundahl LL1673 20Hy/100mA choke or anything similar will fit the bill. No compromises in the power transformer for me. So I picked a medium sized type from my power transformer range. It has a secondary which can be configured from 100 to 600V in 50V steps at 200mA. There are two 6.3V/5A heater windings. One of the heater windings is used for the 6N7 and 6CB5A. This winding is referenced to ground through the two 100 Ohm/5W resistors. Since there is another heater winding, a Tube rectifier can be used. I chose the 6BY5 which will be augmented by two UF4007 silicon diodes. This creates a hybrid rectifier bridge which maintains most of the advantages of the tube rectifier. The secondary is configured for 350V. This yields about 425V DC after the CLC filter. Since there is considerable ripple across the first  capacitor after the rectifier, two 22uF/450V electrolytics are wired in series. Two 100k/5W resistors in parallel to these ensure that the voltage divides equally between the two capacitors. At the same time they act as bleeder resistors. A big capacitance is needed after the choke since it supplies both the driver and output stage and it needs to reduce the ripple to an acceptable level. A minimum of 100uF/450V is needed. More will not hurt I would recommend 100-200uF.

This circuit can be adapted for stereo with a single common supply. The supply sections needs to be doubled in current capacity and I would recommend a minimum of 200uF B+ smoothing capacitance after the choke. Although a bigger power transformer would be about 50% more expensive, only one of them is needed in a stereo amplifier and only one choke. On top of that only a single chassis. The smart cheap skate would go for a stereo amp. 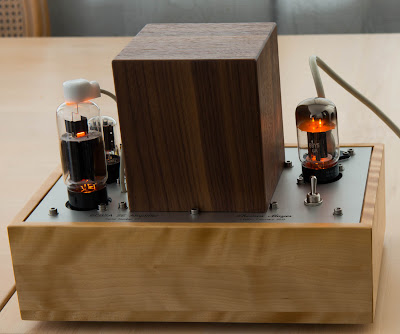 Stay tuned for the next parts of this series which will outline the construction in detail.

Thomas
Posted by VinylSavor at 17:12