Listening to the all DHT amplification chain

I have been extensively experimenting with the DHT gain stage in the recent days and would like to share some listening impressions. 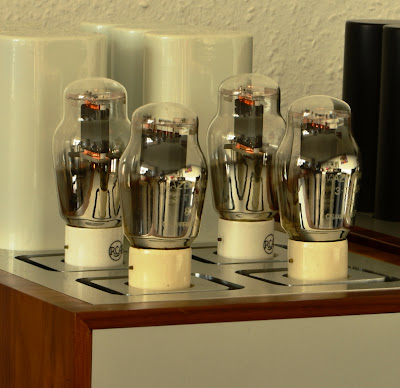 As an initial test it replaced the output section of the E55L LCR phono stage which I've been using recently. The E55L input stage feeding the 600 Ohm LCR RIAA EQ, from there straight into the DHT gain stage. Since it has quite a lot of gain, no step up transformer at the input of the DHT stage. From there into the 6AH4 line stage and then into a 10Y/45 power amp.

Although this was a strange mix of IDHTs and DHTs it gave a good first impression about the suitability of the 841 and 801 in a phonostage. Microphonics were surprisingly low due to the use of vibration damped tube sockets. Noise and hum also very low. Initial sound impressions were excellent. Very smooth and detailed.

The result is amazing. No appreciable microphonics. Noise and hum levels absolutely ok! Sure when you tap the first tube in the chain you hear it ringing in the speakers. Hum and noise are not as low as with the E55L or EC8020. But absolutely not objectionable at all.

This is an amplification chain now which is purely built with directly heated triodes: Lundahl LL1933Ag silver MC step up transformer wired 1:16 feeding the grids of the 841 tube. The 841 is DC coupled to a 801 which drives the Tango LCR EQ through a 4.5:1 step down transformer. The output of the LCR EQ is connected to a transformer input of the 10Y linestage with 1:11,2 step up. The linestage uses a Tribute line output / transformer volume control. Connected to the linestage is a power amp with a 10Y  as driver and 45 as output tube. Directly heated all the way and thoriated tungsten filaments up to and including the driver stage of the power amp.

Anybody who has experienced the difference in sound when changing a tube from indirectly to directly heated has an idea of the sound of this set up. It is extremely detailed without a hint of annoyance which high resolution systems often have. The DHTs sound very smooth and musical. Almost scary lifelikeness. 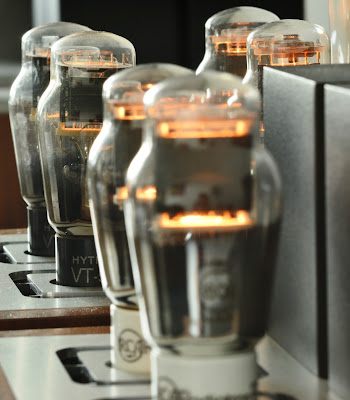 These initial listening tests had been done with fairly regular tubes. Hytron VT51 (military number of the 841) and Taylor VT62 (military version of the 801). Both with metal plates.
In the linestage I usually get best results in terms of microphonics from graphite plate and ceramic socket 801s. So I was curious how such tubes would perform in the phono. Surprisingly the graphite plate 841 from Mazda were more microphonic than the metal plate Hytrons. Still usable, but microphonics at a level as one would except in the phono.
How about micaless globe tubes? My favorites! Surprisingly low in microphonics and noise. Very detailed. Voices are so beautiful through these triodes! Almost unreal!
Does this render the IDHT phonostages obsolete? No, certainly not! A properly implemented LCR phonostage is reproducing at a very high quality level. A DHT version is for the DHT lovers who seek that special magic only directly heated tubes have. A IDHT phonstage is far more practical. A DHT phonostage will always remain rather insane and demand more maintenance. Tubes require some selection for low microphonics, any tiny problem with a tube becomes very obviously audible.
Gain in this set up is on the low side, but sufficient for most of my listening situations. With other power amps or recordings with a low level another amplification stage might be useful. Or when the volume shall be really cranked up. Say a single stage 801 with input and output transformer giving another 12dB. But I have been happily listening to it as is. I even switched to the lower step up transformer input at the linestage (12dB).
The power supplies got a new look. I decided to experiment with wooden transformer covers: 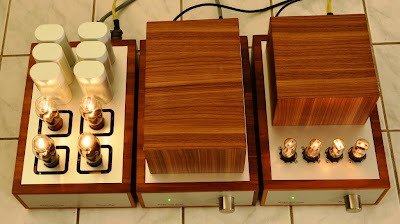 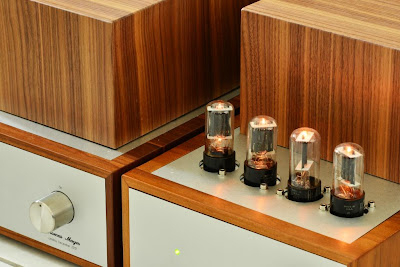