I discovered the music of Eberhard Schoener a long time ago, when I was a teenager. Eberhard Schoener is a german musician, composer and director. He made a lot of great albums. My favorite one is called Events: 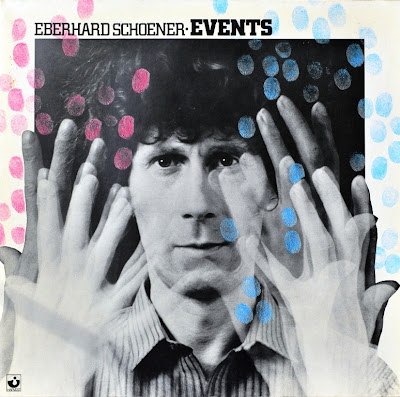 The guy who ran the hifi/record store in which I bought my very first system and also most of my early records recommended this album to me. Back then I liked everything with synthesizers (not so common in those days, end of 70ies/early 80ies. Especially anything that was weird and combined different styles. The guy in the store knew my taste very well. One day when I entered the store he pulled this album from the shelf and said: Listen to this, you will like it. He was so right and I still like it!.

Eberhard Schoener has a classic music education. He studied the violin and conducted several orchestras. Later he discovered his love for electronic instruments like the Moog, Fairlight CMI, Mellotron and Oberheim. Besides conducting and recording albums he did many different projects, life events and also film music for some famous german TV crime serieses.

I once attended one of his life events which was fabulous. It took place on the premises of an abandoned steel plant. One of the highlights was the appearance of italian singer Gianna Nanini at the same time with a local marching band. You would think these cannot be more different, yet they played together and it was great!

One of the lesser know facts is that Schoener actually 'discovered' Andy Summers long before he got famous as Sting. Summers appears on several of Schoener's albums. 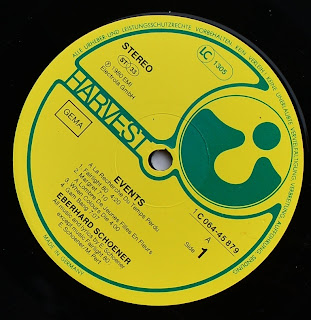 The album Events was released 1980 on EMI Electrola. It is a great example of his ability to fuse different styles together to something entirely new. The opening track called 'Fairlight 80' starts with some funky synth sounds. A female vocalist is accompanied by the fairlight synthesizer and during some parts by an electric guitar. Track two is totally different, a romantic ballad called 'Margaret'. Track 3 'When Colours die' is again quite funky. On track 4, the last track of the first side of the LP it gets really interesting. Musicians from Bali play their traditional instruments along with a funky electric rock guitar. The track swings back and forth between the balineese sytle and Rock/Funk. Side two of the LP is quite different. The first track called Events like the album contains some of Schoener's most atmospheric synth sounds with underlying guitar riffs and the occasional vocal fragment thrown in. During the second half of the track a mix of balineese and rock percussion kicks in and the guitar gets very funky. 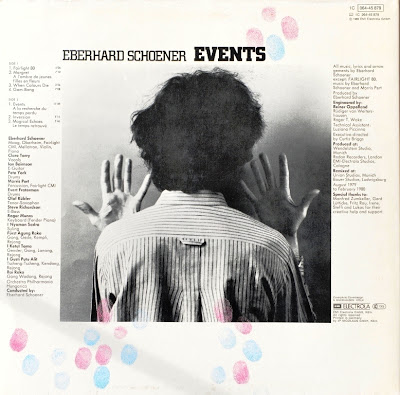 The second track of side two is rather calm, dominated by synth sounds. To my taste the least interesting track on the album. Track 3 'Magical Echoes' is great again and rather magical as the title implies. It opens with the Hungarican Philharmonic Orchestra which Schoener used to conduct. Then the sytnths take over with atmospheric sounds and rythmic sequencers. The track keeps swinging back and forth between classical and electronic instruments.

If you like strange music and a mix of styles, get this vinyl and savor it!

Thomas
Posted by VinylSavor at 10:41