I am an avid user of the LL7903 microphone input transformer which I like to use as line input, for example in power amps with DHT driver to get some more gain. I like this transformer for its versatility and it's very neutral and transparent sound. After the very positive experience with the silver MC step up transformers, I was glad to be able to convince Per Lundahl to issue the LL7903 as a silver version too. 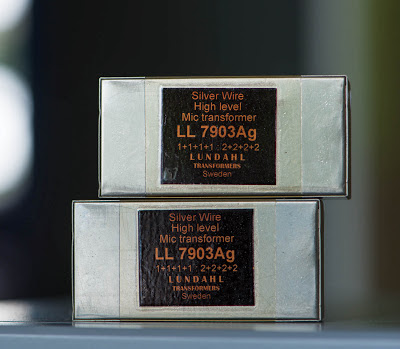 I just installed a pair LL7903Ag in a 45 power amp with 10Y driver. The amp was shown in an earlier post. The copper transformers got exchanged for the silver version a few days ago. So the new silver transformers had some time to break in, since I used the amp every day. Today I finally gave it a serious listen. I have another amp with the same configuration and parts which I could use for immediate comparison.

During the first comparison a subtle but very noticeable difference was audible. The silver transformers sounded smoother yet retained all the detail. This is a property I like a lot. After listening longer time with the LL7903Ag more pronounced differences got noticeable so that it's not that subtle anymore. This power amp is already the king of tone, yet with the silver input transformers it even improved in that respect. More colours, more vibrant tone. The LL7903Ag improves over it's copper cousin in a similar way as the silver MC step up transformers.

This is not at all sounding like the common prejudices of  'silver sound'. They don't sound 'silvery' at all. It is a very beautiful, smooth, rich and extremely detailed sound.

I still did not have the time yet to try the LL1660Ag silver lineoutput / interstage transformers. If they improve in a similar way over their copper counterparts, the phonostage which I am planning with all silver transformers and silver RIAA coils will be a real treat for the ears.