As promised in part 4 about these amplifiers, we will go through the testing of the finished amplifier in this article. 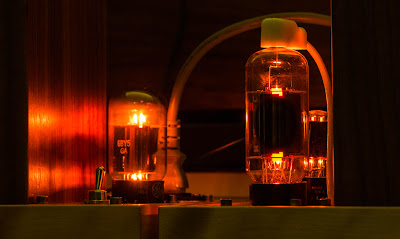 Once a new amp is finished the desire to power it on and listen is very big. But especially now it is important to stay patient and make sure everything is ok before the amps get hooked up to the system. I will give extensive step by step instructions what to do to properly check that everything is ok.

The first think to check is that all connections are there. This can simply be done with a DVM by measuring resistivity between several points.

Let's start at the input. Measure the resistance between hot (inner pin) and cold (outer ring) of the RCA connector. The value should be 100kOhms. Don't get nervous if the values are not exact. This amp requires no exact resistance values anywhere. Next also check that there is no continuity between the cold end of the RCA and the chassis with the ground lift switch on the position disconnected. The Ohm meter should read an infinite value (display out of range). Then close the ground lift switch, now it should read close to zero. If you read a few Ohms that's probably the resistance of the leads of your DVM.

Then check for continuity between RCA hot and the grids of the 6N7. Make sure there is continuity to both grid pins (pins nr 4 and 5). Now check the resistance between the heater pins (2 and 7) it should read a very low value of a few Ohms, this is the resistance of the heater winding. Also measure resistance from either heater pin to ground (RCA cold or chassis with ground lift switch closed). It should read about 50 Ohms, that's the two 100 Ohm resistors in parallel. Now move on to the 6N7 plates. Measure the resistance between the plate pins to B+. Either pick a B+ point inside the amp, or simply measure to the inside of the 6CB5A ceramic plate cap. We expect 47kOhms here. It will be a bit higher if you measure to the plate cap since there the DC resistance of the output transformer primary is in series. Also measure the resistance of the plate pins to ground to make sure there is no faulty connection there. It will start with some resistance reading which will slowly increase. That's the B+ caps charging up. Eventually the DVM will settle at around 250kOhms which is the value of the bleeder resistors (two 100k parallel to the first cap after the rectifier) in series with the 47k plate resistor. If you read a constant resistance significantly lower than 250k or even a short, there is something wrong. Next check the resistance from cathode pin (nr 8) to ground. It should read 1kOhm. Again the reading will start with a lower value and move up to 1k as the cathode bypass caps charges. The last test on the 6N7 is to test that pin 1 (metal shell) has continuity to ground.

Next comes the 6CB5A. Grid pins (4 and 5) to ground should read 500k. Then test the connectivity between the screen pins and plate (plate cap). We want to see 100 Ohm from either screen pin to plate. Zero Ohms between screen pins. Measure the heater and cathode pins the same way as with the 6N7.
Plate cap to a B+ point in the PSU should read a few hundred Ohms. The value depends on the output transformer. Also measure plate to ground the same way as with the 6N7 to check for any faults. The plate to ground reading should settle around 200k.

Next move to the output side. Minus of the speaker terminal should have continuity to ground. The resistance between Plus and Minus should be very low, a few Ohms.

This completes the connectivity check of the signal section. Next we have a look at the PSU. Measure the heater pins of the 6BY5GA socket. Again a few Ohms between them. They should also have continuity to the cathode pins (1 and 8).  Then measure the resistance between the cathode pins and a B+ point or the 6CB5A plate cap. This will be the DCR of the choke. Depending on the choke this reads a few 10s to a few hundred Ohms. If measured to the pate cap, again the output transformers primary DCR will be in series. Last thing to check for the 6BY5 is the resistance between the plate pins (4 and 5). This will be the DCR of the power transformer secondary. Depending on the transformer this will read some tens to about hundred Ohms. Also check for continuity to ground from the plate pins. We want infinite resistance to ground.

Lastly you can measure the mains connector. Make sure there is continuity from the safety earth pin to chassis indepe3ndent of the ground lift switch setting. Resistance between the two mains input pins should read very low, some tens of Ohms.

As a guideline I list all resistance measurements again below with the readings I get on my amp:

That's about all the tests which can be done before the amp is power up the first time. If all this tests ok it is quite save to go the next step and apply some voltage. But again we will nut just turn the amp on, but go step by step.

First we unplug all tubes and apply mains voltage. Then measure the heater voltages at each tube socket. Since the heater windings will be unloaded, the voltage reading will be somewhat higher than 6.3V. Depending on the voltage regulation of the power transformer values from 6.6 to 7V can be expected. Next measure the AC voltage between pins 4 and 5 of the 6BY5 socket. Again it will read somewhat higher than when under load. Then plug in the 6CB5A and 6N7, leave the 6BY5 out. Turn on and measure heater voltages again. The value should now be close to 6.3VAC. Anything between 6.0 and 6.4V will be ok. If outside that range, especially if higher, correct it.

The next part is a bit tricky. We want to test the PSU section without the signal tubes plugged in. The PSU will put out a higher voltage without load. Close to 500V which exceeds the voltage rating of the power supply caps. Two choices: Reduce the secondary voltage to something like 200VAC, or temporarily solder a dummy load across the PSU output. 5-6k will do. At least a 50W resistor is required. It will get very hot! Since my power transformer provides flexibility in the secondary voltage, I did this test with 200VAC going into the rectifier. Turn the amp on with only the 6BY5 plugged in. Watch the B+ voltage to slowly start to rise after 5-10 seconds when the rectifier cathode comes on.

For such measurements it is great to have adapters like these: 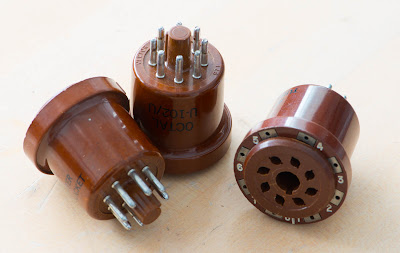 They provide access to each pin while the tube is plugged in. You can make such adapters yourself by using Octal bases which get wired to an Octal socket. Bases can be salvaged from dead tubes. 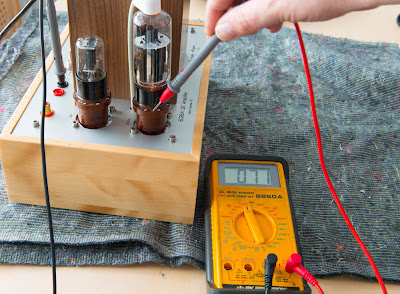 As a reference here is the list of measurements I get :

Again don't get too worried of you don't get those exact values, this circuit is very tolerant and tubes can vary from sample to sample.

Can we listen to it now? Not so fast! We want to see what this amp does with an input signal. I recommend to at least do a check of the frequency response. Also the gain should be measured to see if it is within the expected range. And compare gain between the amps or channels. They should be as close as possible. Also make sure the phases are correct and not reversed in one channel.

All that is needed are a signal generator and an oscilloscope. For the measurements the amp should be loaded with a dummy resistor in order to measure the output power. If a good quality output transformer is used, this amp can be operated without any load attached and nothing will get damaged. We only use the dummy resistor to test the amp under load and to be able to get the output power figure. I ran some measurements with a 5 Ohm load resistor.

First check max power output. Apply a 1kHz sine to the input and monitor the output signal. Turn the amplitude up until the waveform starts to get distorted like this: 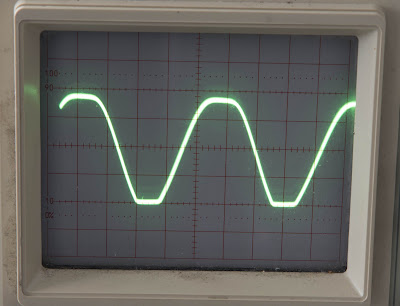 Back off a little until the waveform looks good again like this: 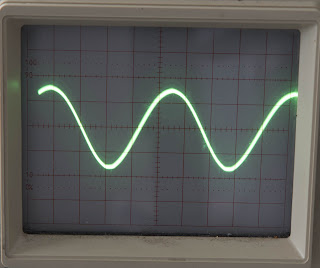 Now measure the amplitude of the signal  (from gnd line to crest of waveform). This voltage divided by the square root of 2 (about 1.4) gives the RMS voltage. The output power calculates: RMS output voltage squared divided by the load resistor. I get 8.5V amplitude which is about 6V RMS. 6V squared is 36. Divided by the 5 Ohm load resistor calculates to just a bit over 7W. Of course if you have more sophisticated measurement equipment you can also run distortion tests and measure the output power at given distortion percentages. For a beginner a simple measurement like the one described will do.

Here some measurements which I took at close to full output power, starting at 1kHz: 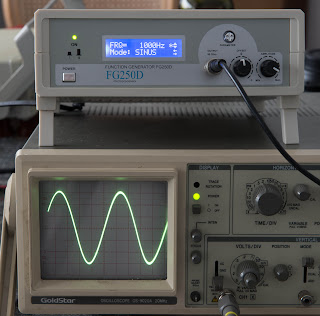 Moving up to 10Khz with the input amplitude unchanged: 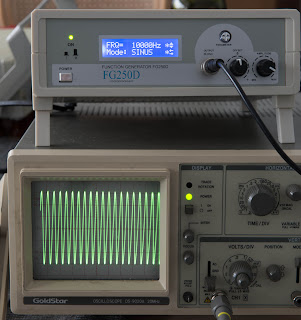 Nice flat response so far, but up to 10kHz that's what we would expect anyways. At 20kHz, output level is still at the same height: 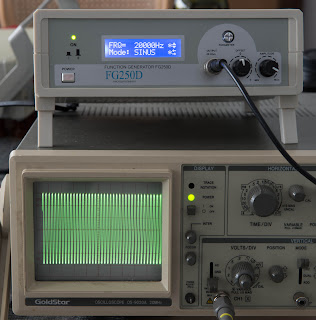 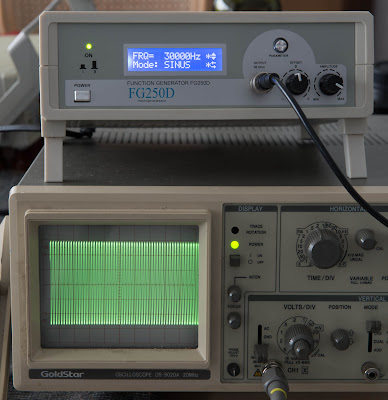 At 40kHz we start to see the amplitude dropping very slightly: 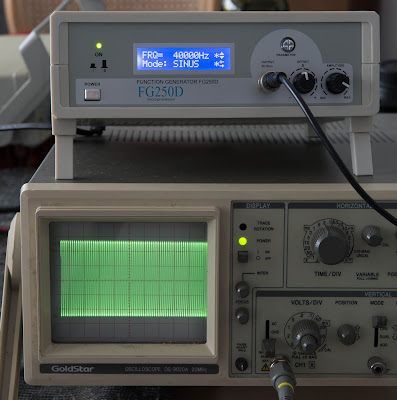 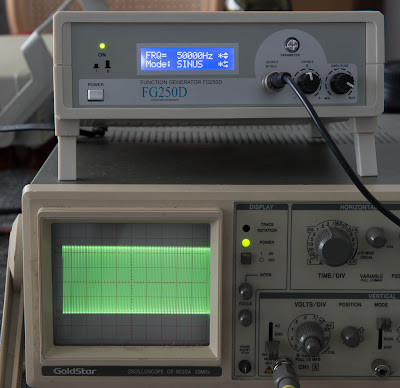 Adjusting the time base on the scope to check if we still have a nice sine wave: 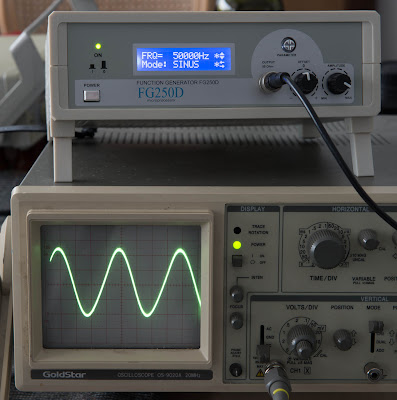 And finally around 60kHz we reach the -3dB point: 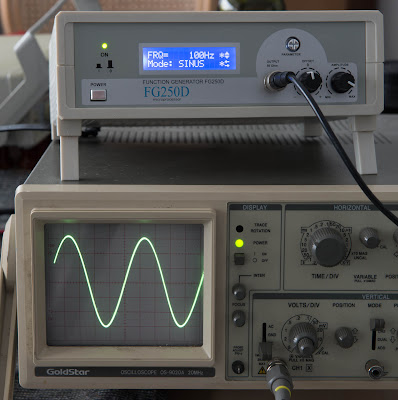 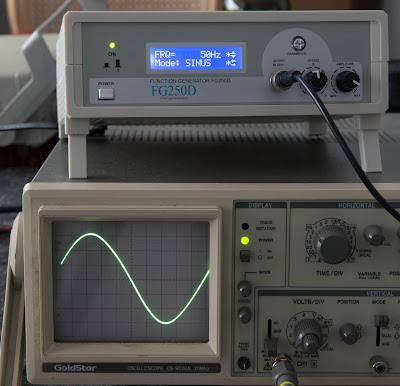 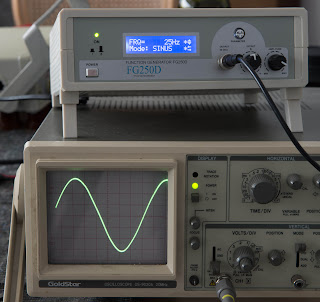 At 20Hz we start to see a little core distortion from the output transformer: 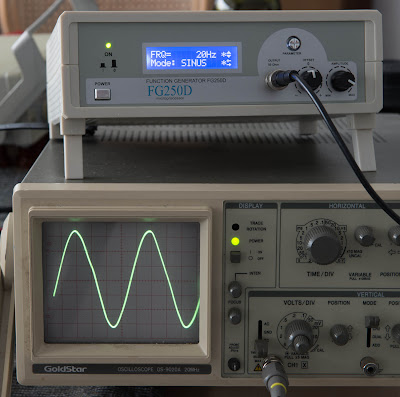 Which gets more pronounced at 15Hz: 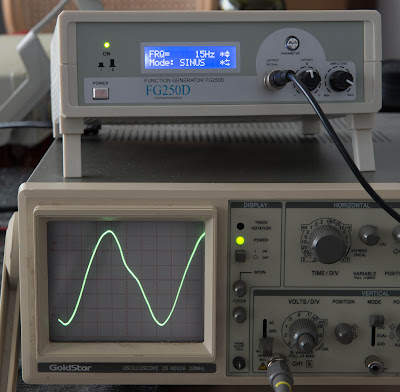 But the output is still at full level! Backing off the volume a bit and this distortion goes away: 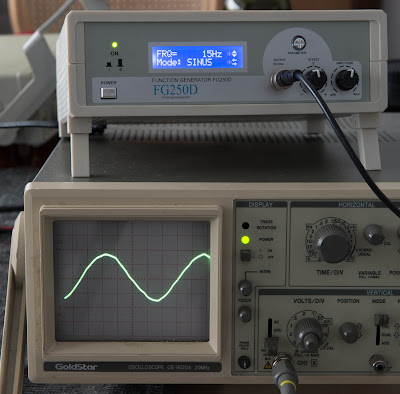 So the -3dB point at the lower end is way below 20Hz, pretty good for such a small amp.

Some people like to see the square wave response. Here the 1kHz square wave: 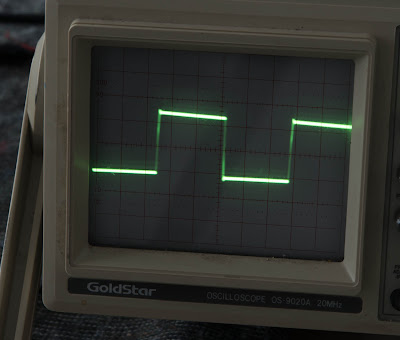 Nicely defined with just a little bit of overshoot at the rising edges. 10kHz looks good too: 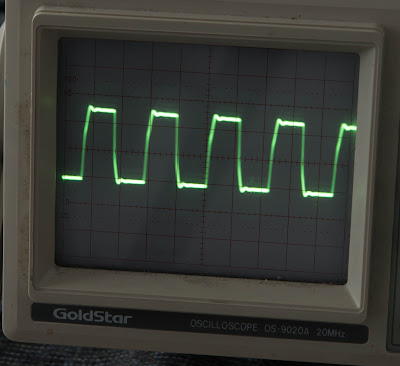 And finally let's measure phase and gain. Each stage of the amp is inverting, so we expoect the output to be in phase with the input: 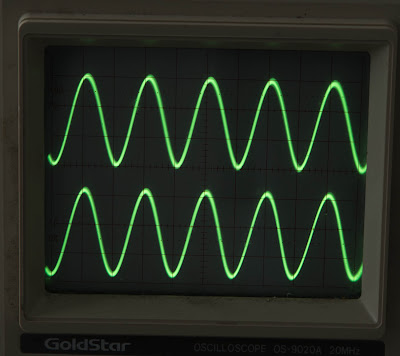 How does this gain compare to the theory? The 6N7 driver tube has an amplification factor of 35. In an RC coupled stage the gain calculates roughly as amplification factor multiplied by the load resistor (47k) and divided by sum of the plate resistance (11k) of the tube and the load resistor (47k). This results in a gain of about 28x from the driver. The gain of the output tube calculates similarly: mu (about 3.5) times sum of rp (about 1k) and load impedance (5.5k). This results in a gain of roughly 2.9x.
The total gain of the amp is driver gain multiplied by output stage gain and divided by the step down ratio of the output transformer which is 32 in this case. So we get 28 * 2.9 / 32 = 2.53. So the actual measurement is close to what we would expect from calculation.

Now since the amp works as expected, it is time to give it a listen. This will be covered in part 6. Stay tuned!

Thomas
Posted by VinylSavor at 07:33