The previous post showed the schematic of this phono stage. Here are some photos and results from the first prototype build. 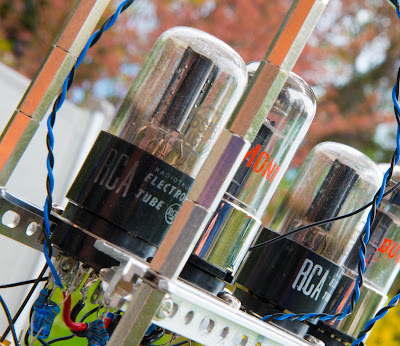 This is a quick mash up of the circuit as drawn in the schematic to prove the concept and get an idea how it sounds. I was most concerned about hum since the power supply is supposed to reside in the same chassis. The prototype build even got a rectifier tube, a 6BY5. Rectification is done with a hybrid bridge with two UF4001 silicon diodes complementing the tube. Smoothing of the B+ is done without iron, just a chain of RC segments. I added filter caps until the hum level was gone down far enough.
A PSU schematic will follow in another post.

This is the complete view of the intial prototype build: 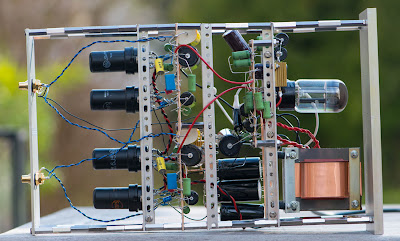 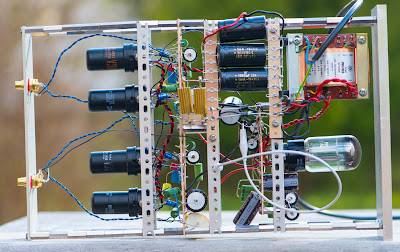 I used metal tubes for the first listening tests since I expected some shielding from the metal shell. But tests with glass tubes showed almost no difference with regard to hum. 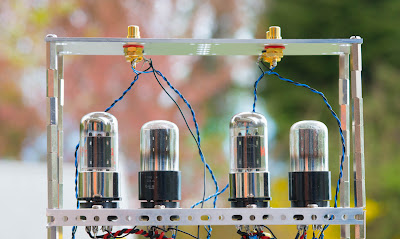 Frequency response measurements show an almost ruler flat response from about 50Hz to 20kHz. Response falls off a little below 50Hz and reaches -1dB at 20Hz. This low frequency roll off is mainly caused by the size of the coupling cap between the two stages. I left it that way because a little roll off at the very low frequencies is quite ok to attenuate rumble. The response rises a bit above 20kHz reaching about +1dB at 30kHz. Some tweaking of the RIAA circuit can get rid of that. As is it was good enough for me to give it a listen.

As expected this phono stage cannot compete with the big LCR RIAA preamps. But it is a nice and solid performer. Smooth sounds with good resolution. I've been listening with this preamp almost the entire last week without any urge to switch to another phono stage.

As a next step this will be built up more nicely in a chassis with some tweaking to the RIAA circuit and the power supply. Stay tuned.

Email ThisBlogThis!Share to TwitterShare to FacebookShare to Pinterest
Labels: 6BY5, 6J5, 6SF5, Preamplifier