This is a project which got delayed a bit but I finally found the time to finish it during the holidays. It is a passive LCR EQ unit which covers RIAA for LP playback as well as NAB and IEC tape equalisation. 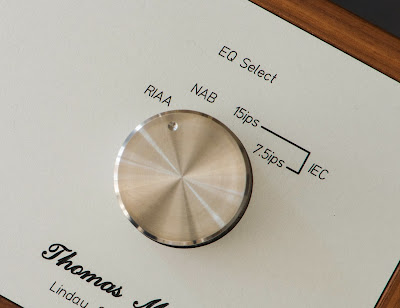 For IEC, both 15 ips (inch per second) and 7.5 ips curves are implemented. All networks are built as 600 Ohm LCR EQ filters. Thus they need a low impedance preamp to drive them. This particular unit will be used with a DHT preamp. But it could also be used with the multi chassis modular preamp which was intentionally split up to allow the use of different EQ modules. This way the same preamp can be used as phono preamplifier as well as tape preamplifier, which gets fed from the tape head.

The chassis style is the same as that of the modular preamp series:

Just a simple rotary selector switch at the front which switches the different EQ networks in and out of the signal path. 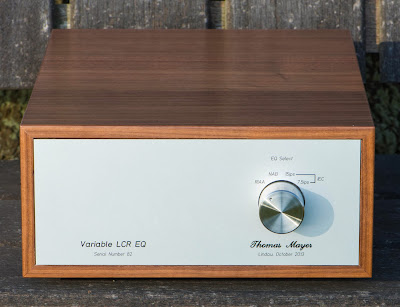 Nothing fancy on the backside. Just inputs and outputs and a ground post to ground the chassis.

The RIAA network follows the conventional approach. It contains two LCR filters. One for the 318/3180uS time constants (50/500Hz corners) and one for the 75uS time constant (2122Hz corner frequency).

The network for NAB equalisation only has two corner frequencies at 50Hz (same as RIAA) and 3180Hz (3180 and 50uS). So it requires only one LCR network. Since it shares the same low frequency corner with RIAA, but has a higher upper frequency corner it's attenuation is higher at 1kHz.

Here a photo of the internals: 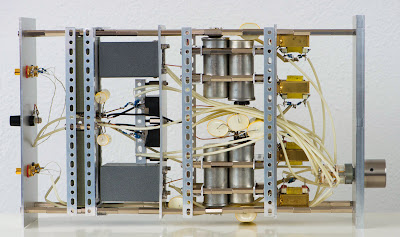 I have another variable EQ design in the planning which will have many EQ settings to cover most curves for old shellac and vinyl mono records. This design will be based on the Octal Phono Preamplifier circuit. Stay tuned! 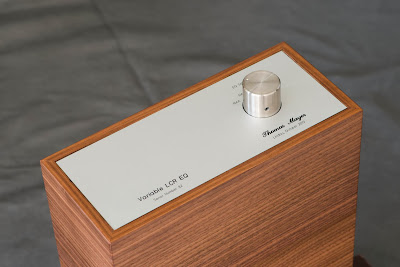