The search for that 'magical' operating point

One of the most often asked questions about tube amps I get is: 'Which operating point do you recommend for tube xyz?' There is also a lot of discussions on forums about the 'optimal' operating point for certain tubes. I think it is time to present my view on this.

I'm puzzled when I see such a question posted somewhere, and straight answers are given down to the decimal point of a milliampere, without asking how the tube is loaded. I've also seen reports from people claiming that they tweaked their amp to the best possible operating point and that miniscule changes in that cause the sound to change significantly. Quite often people even think that their amp is of exceptional quality because of that. They think it must be a really good amp because it makes small changes in the operating point audible. Well, I think your design is marginal, if it is sensitive to small changes in operating conditions.

First let me point out, that the choice of a good operating point is largly dependent on how the tube is operated. Does it use a resistive load, inductive or a constant current source? What is the function of the tube under question, what constraints are there, what is the B+ voltage and in which range can it be adapted if necessary. And of course it is important to also consider the capability of the components around the tube. For example if it is transformer coupled, the current rating of the transformer is important.

If all that information is known, then the ideal operating point is chosen such that the tube's grid can be driven with about equal amplitude in both positive and negative direction before significant distortion kicks in. This point can be easily found on the loadline. But if the tube stage under question is designed with a lot of headroom as I described in an earlier post, then it will not be critical to hit the exact spot in the middle of that load line. Because of the headroom the operating point can be changed by some margin without significant changes in sound character. And this is important if you want a stable design. Tubes and also passive components age and shift their parameters with use. This results in shifts of operating points. I want my amps to have the same sound over the widest possible range of the tubes and components life time. Also in amps with passively filtered power supplies (which I prefer) the B+ voltage will change with mains voltage fluctuations. These should not impact the sound of an amp or preamp.

Let's clafrify this a bit further using a 801A/10Y linestage as an example. I chose this because in the recent days I got many questions about the ideal operating point of the 801A in a transformercoupled line stage. Let's assume the design is using a line output transformer which can be run with 20mA DC on the primary. This means it is capable to be run with up to 40mA before significant core saturation kicks in, so we have a range around the 20mA point which is about symmetrical from 0mA to 40mA. Before the transformer winders among you get excited: This is just for simplicity for the purpose here, actually things are a bit more complicated. We want to be able to use both 801A and 10Y, so we stay within the voltage limits of the 10.

We will pick 400V B+ which will result in -30V on the grid for 20mA current. In a cathode biased design this will require a 1.5kOhm cathode resistor, which will yield 30V drop with 20mA. 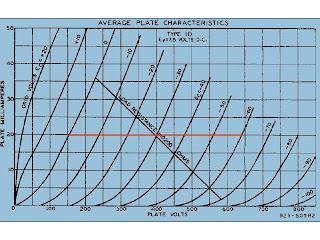 The graph on the left shows the plate curves of the 10. The loadlines for a resistive load (black) and transformer load (red) are drawn in. The transformer is assumed to be unloaded so the loadline is horizontal. The transformer load line is idealized. In reality it will look a bit different, but for the purpose of this topic this is fine. As the transformer secondary would be loaded with a resistance, the loadline would tilt side ways. For the resistive load a B+ of 600V would be required, while it is 400V for the transformer (neglecting copper losses, which don't play a big role in this case).
As you can see the plate curves are nice and evenly spaced between the point where they cross the red load line. We have a range of 60V peak to peak through which the grid can traverse. This means that the overload point for such a line stage would be more than 20V RMS (30V amplitude divided by square root of 2). That's what I call head room in a line stage where you typically have 2V RMS max on the input, may be 3 or 4V if you have unconventional sources with higher than normal output. The plate can swing between 150 and almost 650V without major distortion. That's 500V peak to peak or 180V RMS. Assuming a 4.5:1 lineoutput transformer (for example Lundahl LL1660) this will give up to 33V RMS output at an output impedance of about 250 Ohms. Plenty of headroom to drive even insensitive power amps and nice low Zout, so you can use long cable runs without any problem.
Now getting back to the topic of the operating point. If you shift the B+ voltage let's say down to 300V, things don't really change a lot, except the maximum possible output swing is reduced, but we have plenty of headroom to move in anyways. The same if you change the current. The operating point can be easily varied by plus or minus 25% between 15 and 25ma without significant changes. That's what I call a stable and wide headroom design. The tube can age (which typically results in less emission and less current) and the line stage will not change it's sound character much. Also no need to be picky about cathode resistors with 1% tolerance 5% is more than enough.
If you look at the resistive load line, things are a bit different. The spacing of the points where the plate curves cross the load line gets narrower as you move to the right. Here I would choose a different operating point to start with. Probably more like 300V/20mA this would move it to the more linear region. This also shows why I prefer inductive loading (CCS will be similar) or transformer loading with lightly loaded secondary.
So, if you experience significant changes in sound as you experiment with operating points, look at your design and fix the cause, rather than endlessly searching for the ideal operating point. You might be in the non linear region of the tube or some components in the design are marginal and already at the point where the current causes some stress. Move away from there, find a tube type which is more suitable for the case or find the components which are at their limits and change them.
Even if you think you have found a point which you like, think about this: As the tube is driven with signal, it moves through a whole range of points on the load line. It will behave differently at all those points. Imagine a piece of music which has some large amplitude bass notes, and some low level back ground vocals or piano is played along those notes. The low level signal portions will be amplified very differnt at the upper and lower peaks of the bass amplitudes. This is often very audible in marginal designs. When no bass note is present, vocals and piano lines might be reproduced nicely with beautiful ambience, but as the bass note kicks in the voices become less transparent and the ambience dissapears. In a good, wide head room design everything will remain stable.
I hope you enjoyed this little excursion into operating points and you will rethink and look at the bigger picture next time when you are asking yourself which operating point you should choose. When you finished a design, a good test for stability is to change the operating point and listen for changes in sound. If you hear changes with small shifts in the conditions, find and fix the cause.
Best regards
Thomas
Posted by VinylSavor at 11:18