Tube of the Month: The 6CB5A

Although many of you might know that I'm ususally very fond of directly heated triodes, especially those with thoriated tungsten filaments, I will open this series with a tube type which you probably would not expect to be raved about from me: An indirectly heated beam power tube, meant to be used for horizontal deflection stages in TV sets, the 6CB5A. 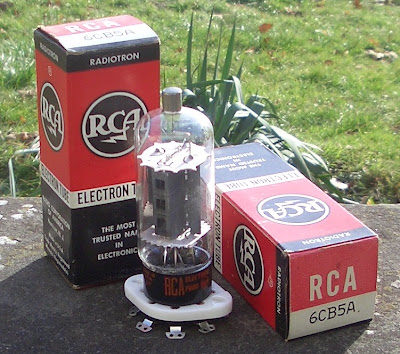 Why such a tube you might ask. What brings a die hard user of directly heated triodes to the odd TV tube? Here is the story behind this: About two and a half years ago there was a discussion in a german tube audio forum called Röhren und Hören (translated: Tubes and Listening) about a DIY tube power amp. Details about that amp will be covered in an upcoming series of posts about a SE amplifier platform. One of the requirements for the amp was moderate parts cost. If you are like me and don't feel comfortable to start an amplifier project unless you have at least a dozen spares of the tubes, tube price becomes an important factor in the overall cost. Even the cheapest chinese 300Bs are $100 now. Considering just a single spare set that is $400 for output tubes alone. A dozen NOS 6CB5A will set you back just $60 or even less. And you don't even have to search a lot to find them at these prices. Almost every reputable tube dealer lists them for $5. 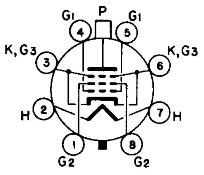 So I started to search for alternatives which could be used as output tubes in single ended amps and would deliver a similar output power as the average 300B amp, around 8W. I browsed the databooks and checked my stash. A natural choice were horizontal deflection tubes connected in triode mode. The 6CB5A came up as an candidate and luckily I had some in my tube stash. The pinout of the 6CB5A is shown on the left. A detailed datasheet can be found here. Unfortunately the datasheets of these types of tubes almost never show the plate curves for the triode connection. In oder to verify that the tubes I selected are at least moderately linear and usable in a no feedback single ended design, I set up an adaptor to test them in a tube tracer.
Most of them are actually quite non linear in triode connection. But the 6CB5A looks quite good. Below  are screen shots of the plate curves taken with a scope and a tracer.

The 6CB5A curves are shown in the left screen shot and the right one shows a Western Electric 300B for comparison (original manufacture not a reissue from the 90ies). The right most curve is a bit closer due to a glitch in the tracer, so ignore that one. Admittedly the 300B is more linear, but the 6CB5A looks quite similar. Definitely worth trying triode connected in a single ended amplifier and a low cost alternative to directly heated triodes.

The maximum plate dissipation of the 6CB5A is 26W. So it should be good for 6-7W in SE mode. Due to it's low cost there is no need to be nervous about running it at it's limits or even a bit beyond, so maybe up to 8W can be squeezed out. But more about that in upcoming posts.

﻿﻿The 6CB5A was manufactured by almost all of the major tube companies. The picture above shows a selection of 6CB5As from various brands. As with other tube types a lot of cross branding was common practice. So you will find 6CB5As of the same construction but with different brand names printed on them. 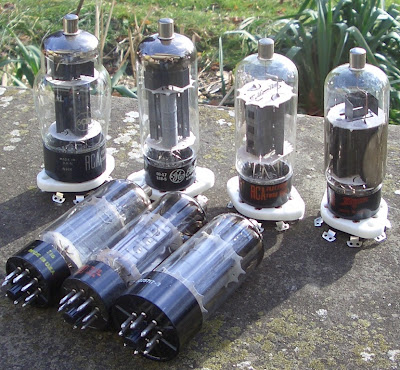 Above you can see a selection of 6CB5A tubes with different shapes and internal construction. The leftmost is actually a 6CB5, the predecessor which was built in a ST glass shape.

The tube uses the common octal base and has the plate brought out to a cap on the top. Being indirectly heated with 6,3V/2,5A should make it straight forward to build a hum free amplifier without the need for a DC filament supply.

Stay tuned for circuits with this tube. Here is an example of a SE amplifer with the 6CB5A: 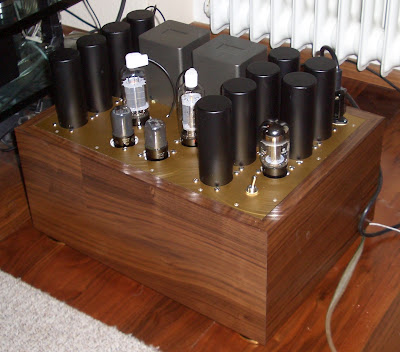 Thomas
Posted by VinylSavor at 00:49

Email ThisBlogThis!Share to TwitterShare to FacebookShare to Pinterest
Labels: 6CB5A, Tube of the month